What is the Sony Xperia Z3 Tablet Compact?

The Sony Xperia Z3 Tablet Compact is the large-screen sibling of the Xperia Z3 mobile phone, offering a similar waterproof design but with a tablet form factor. It’s blessed with a wafer-thin waterproof casing, a quad-core 2.5GHz chipset, a Full HD screen and an 8.1-megapixel rear camera for photography and video capture. It also features NFC for wirelessly exchanging data at close quarters.

Although the early crop of Android tablets were big 10-inch affairs, the Xperia Z3 Tablet Compact – as the long-winded name suggests – is slightly easier to slip into your bag at the beginning of your morning commute. Its 8-inch screen puts it in the same bracket as the Nexus 7, LG G Pad 8.3 and iPad mini 3, all of which are small-scale slates that are ideal mobile travelling companions. 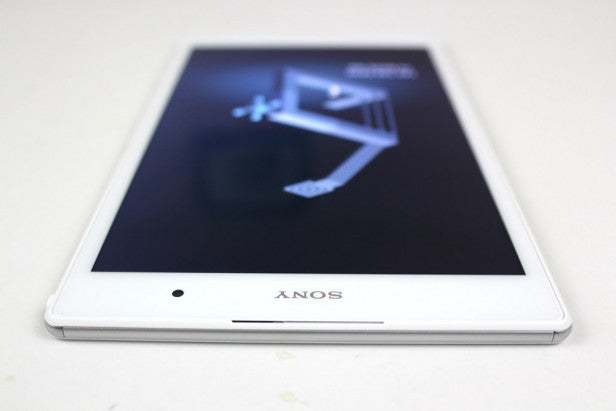 Sony’s designers have clearly found their signature look, as the Xperia range has remained largely unchanged in style for a couple of years now. The company favours sharp, straight edges and a mixture of metal and plastic, and the Xperia Z3 Tablet Compact inevitably follows suit.

At 6.4mm it’s almost impossibly thin for a tablet, and by keeping the overall weight down – it tips the scales at just 270g – Sony has created a device which won’t put any undue strain on your wrists. There’s no discomfort to be had holding it with just one hand, which makes it ideal for when you’re riding on public transport and need another arm free to steady yourself between bumpy stops. The weight’s been kept down by not using much metal in the construction – unlike the Xperia Z3 phone, the Xperia Z3 Tablet Compact only has metal corners, with the material which runs around the edges actually just metallic-effect plastic. 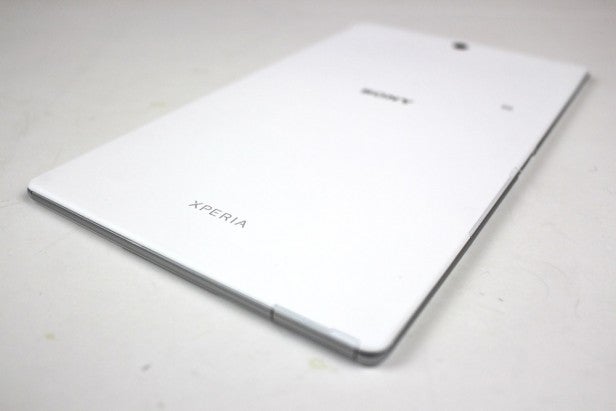 The back of the tablet is plastic as well, which doesn’t look as premium as the glass used on the Xperia Z3 phone, but has the positive effect of making the device less likely to slip out of your hand and onto cold, unfeeling concrete. Its matte texture also improves grip, but such safety comes at a cost – the overall effect is less striking that the aluminum-encased iPad mini, and it also picks up marks and scratches a little too readily for our liking.

In terms of buttons, Sony has kept things simple here. The power and volume keys are located on the right-hand edge of the Xperia Z3 Tablet Compact, right in the middle so they’re easy to reach during use, as that’s where your fingers will naturally rest. Elsewhere you’ll find the microSD slot – and SIM card slot if you’ve opted for the cellular version – behind a panel, and a similar compartment on the bottom edge for the micro-USB socket.

Both of these panels must be carefully re-sealed after use to ensure the device maintains its water-resistant talents. If you’re worried about water getting in after repeated removal of the USB charge panel, you can buy the optional charging dock, which tops up the tablet via two pins on the left-hand side. 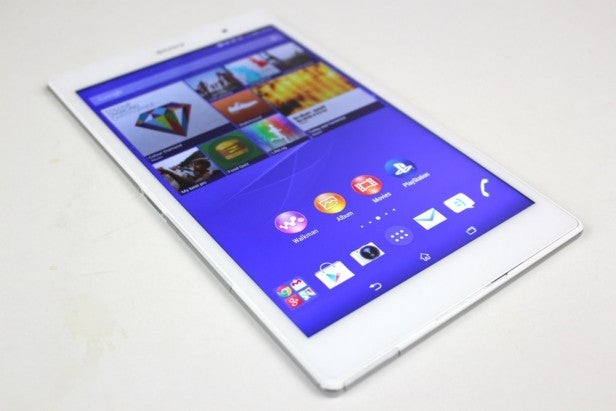 The display is a 1200 x 1920-pixel Triluminos panel with a pixel density of 283ppi. It’s impressively punchy and colourful, with excellent brightness and good readability in direct sunlight. The glass is supposedly shatter-proof and comes equipped with an oleophobic coating to prevent the build-up of unsightly fingerprints. We naturally weren’t brave enough to test the former, and the latter seems like a rather hollow boast – after only a few minutes of use the screen was awash with smudges and greasy prints.

While it’s true that in terms of pure pixels the Xperia Z3 Tablet Compact’s display is trailing behind those seen on its rivals, you never really get the feeling that you’re missing out. Text is sharp and images look clear and defined, so unless you’re planning on taking a magnifying glass to the screen, you’re unlikely to pine for additional pixel density. Viewing angles are also excellent, with the picture remaining clear and legible regardless of how you hold the tablet.