Samsung has already delivered a couple of excellent budget-priced TVs and the TU7020 is another to add to the list. Gaming performance is class-leading, eARC brings Atmos support at an affordable price, and overall picture quality is excellent – although it lacks the fireworks for true HDR.

It has virtually the same spec as the TU7100, and comes armed with the brand’s 4K upscaling prowess, HDR support and a bevy of streaming apps via the Tizen OS.

The Samsung TU7020 arrived ahead of Black Friday 2020 with an RRP of £429. It’s effectively the same as the TU7100 but omits Bluetooth from its spec sheet.

It’s only available in the UK and can be bought from Currys PC World.

The Samsung TU7020 sports an unobtrusive design that belies its affordable tag. There’s a reassuring feel to its build quality; the thin bezel gives the display plenty of prominence and the rear’s curved and brushed finish is of similar quality to more expensive Samsung models. The all-black finish offers a point of difference to the TU7100’s dark silver trims. 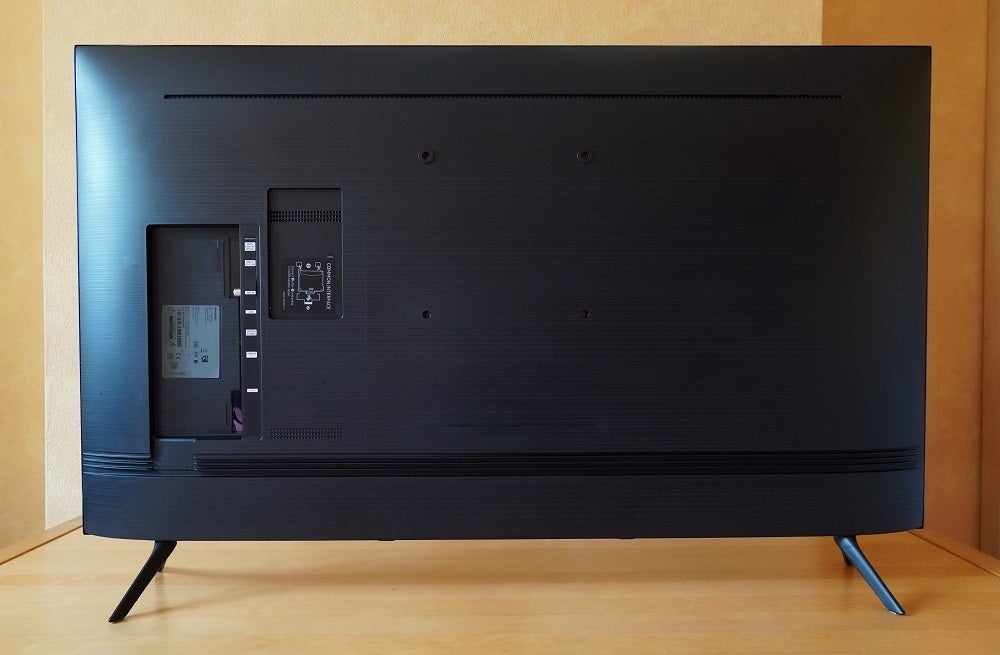 The TV is supported by feet at either end, but at this size it shouldn’t pose a problem for placement on stands and tables. The feet offer sufficient clearance to slip a soundbar beneath if you have one or are considering getting one.

Assembly just minutes – simply slot the feet in until they click. It’s a process that should make set-up less intimidating even for tech luddites.

There’s no smart remote, so you’ll have to make do with the standard wand. The layout differs from the more expensive models, and while it’s okay to use, it’s chock-a-block with buttons, some of which are very tiny. 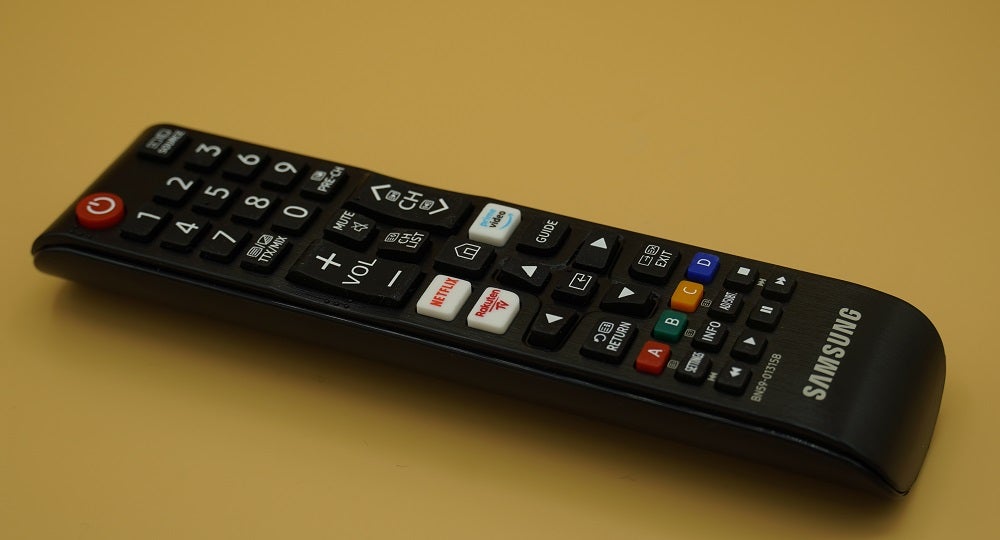 While not outfitted with the fancier features of its more expensive siblings, the TU7020’s interface, app support and gaming are like what you’d see higher up the range.

However, the one area of disappointment is the number of connections. There’s no Bluetooth and the TU7020 has Wi-Fi 4, not the current Wi-Fi 5 standard. Physical connections amount to USB, digital optical, LAN and a terrestrial antenna, but there’s no satellite input and only room for two HDMI inputs. One does support eARC but having two inputs means swapping in and out of sources. That’s not ideal. Samsung’s Tizen is arguably the class-leading interface. While exclusivity has run out on Apple TV and BT Sport, Apple Music is still under Samsung’s lock and key. Other apps include Spotify, Tidal, Netflix, Prime Video, Disney+ and Now TV. Samsung’s sets don’t have Freeview Play, replaced by its TV Plus service. All the UK catch-up and on-demand apps are accounted for along with BBC Sounds.

The interface can be a little sluggish, but not enough to induce fits of rage. While the Samsung TU7020 is SmartThings compatible, that doesn’t extend to operation of the TV or for set-up purpose, despite the TV indicating it can be used for the latter.

The Game mode doesn’t support VRR, ALLM or 4K@120Hz, but activating it unleashes a class-leading 9.7ms of input lag. Just be sure to put Game mode on “Auto” so the TV automatically detects a connected games console or PC. 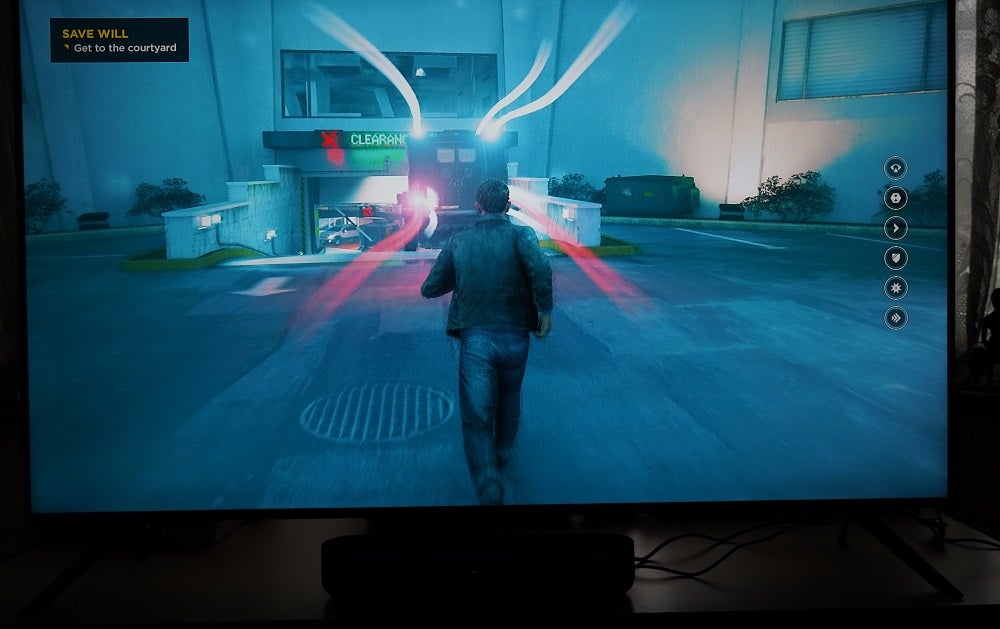 The Samsung TU7020’s Crystal Display produces a pleasantly surprising performance. Colours in upscaled HD broadcasts have a natural appearance, far more subtle than more expensive TVs. Watching Countdown and the TU7020 gets the various blues of the set just right, the hues of darker and lighter blues well conveyed.

In addition, skin tones are natural, favouring subtlety over outright punchiness. David Dickinson’s “tanned” look could come across as ruddy, but the Samsung TU7020 presents his various shades of orange (and red) without overcooking it. In general, complexions look good in terms of tone and appearance.

Motion is solid enough with the Picture Clarity settings, although movement can invoke a little judder with fast-moving content – the TU7020 has a less than grippy hold on NFL players when they’re grappling with each other. There is a slight but noticeable artefact that pops up across multiple sources, a slight purple outline around bodies in motion.

Images upscaled by the Crystal Processor 4K are crisply defined and full of clarity. Fine detail is excellent; whether its textures, objects or faces – the Samsung TU7020 is fantastic at digging up detail. 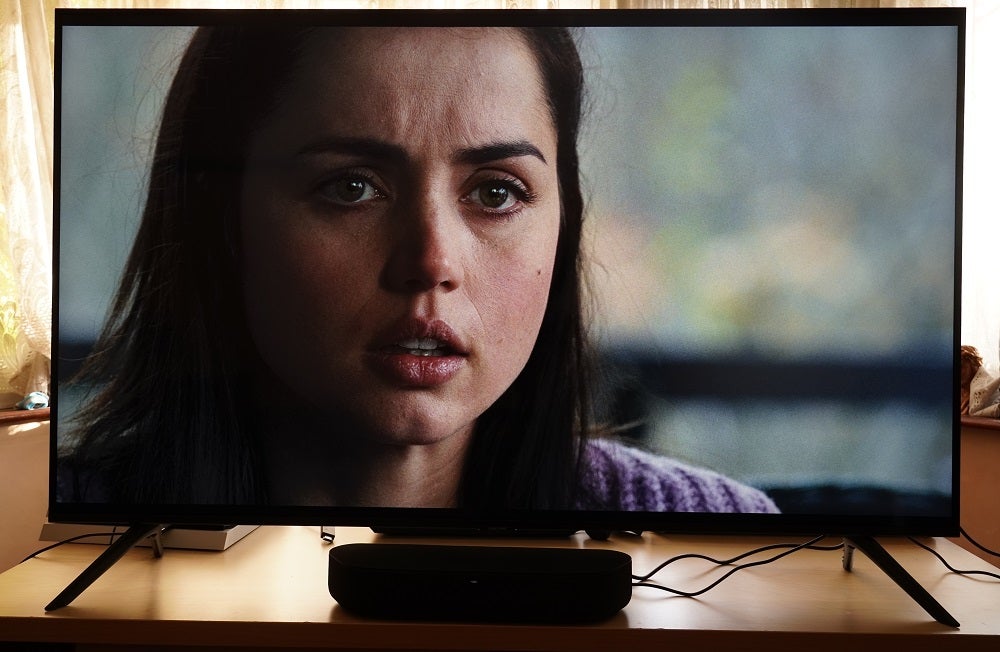 And that’s also the case with 4K content, but in a more exacting manner. Ang Lee’s Hulk features widescreen shots of faces in close-up, and the Samsung TU7020 showcases them in fantastic fashion. You can see virtually all the bristles in Sam Elliot’s moustache, or the pores of Jennifer Connelly’s skin. 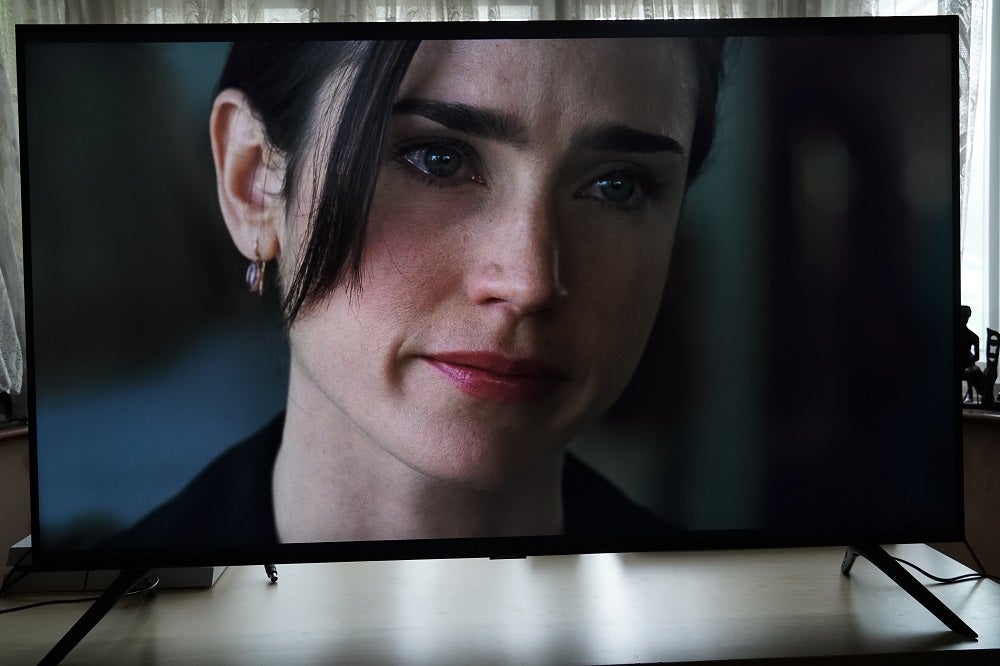 Black levels hold up well – at least head-on – in Alien (HDR10+) as the crew of the Nostromo investigate the foreign ship. Like the Samsung Q80T, the TU7020’s image offers wide contrasts, but definition in the darker parts is less finely excavated. At wider and acute angles colours lose a little saturation, and blacks can veer towards grey. 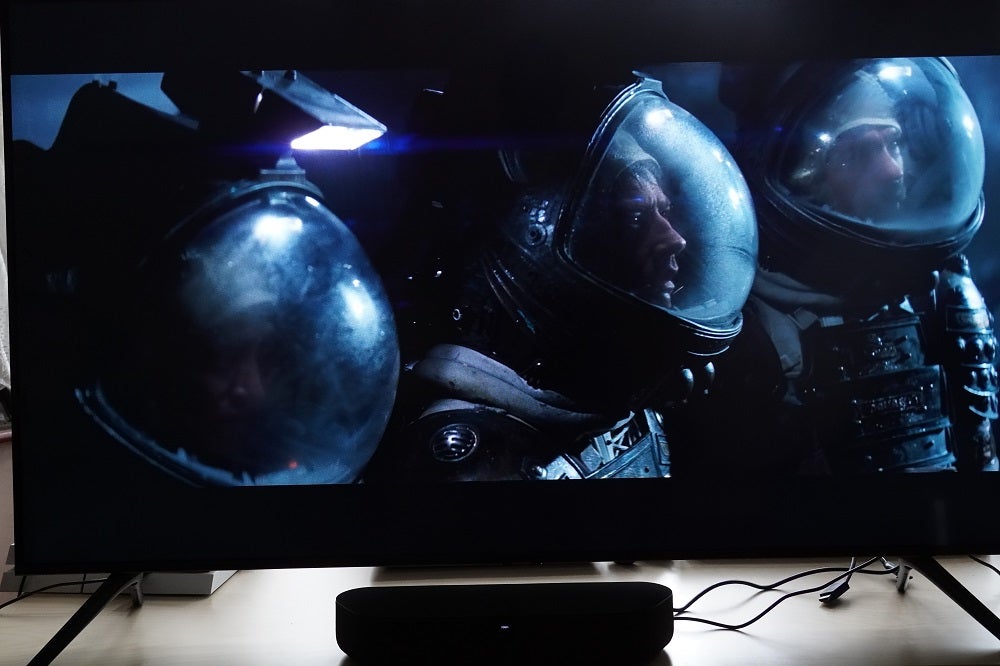 HDR support covers HDR10, HLG (iPlayer and Sky Q), as well as HDR10+ and the HGiG profile for gaming. HDR10+ is a dynamic metadata HDR format backed by Samsung, and it tailors the HDR performance to the characteristics of the TU7020’s display given its relative lack of brightness. As always with a Samsung TV, there’s no sign of Dolby Vision.

And HDR performance is limited, although that isn’t a surprise. Skin tones and highlights lack the boldness you’d find in a premium set and while you can boost HDR with the Contrast Enhancer – bumping up the brightness and widening the contrast – it leeches a little detail out of the image. As an alternative, LG’s UN70 goes brighter than the Samsung when it comes to HDR content. 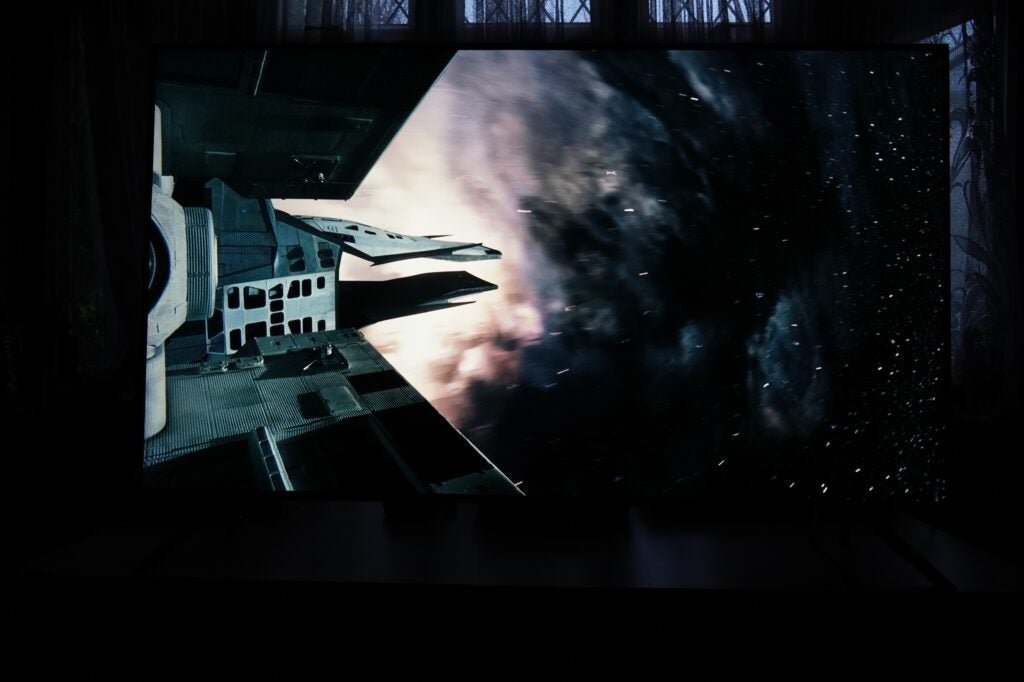 That said, I like the colour performance the Samsung TU7020 offers. The gold tones on the 4K Blu-ray of Whiplash come across well, and the set can display a wide range of colours. In the Avatar Blu-ray, colours have vigour and naturalism that’s tonally more on point than what’d you get from the Hisense A7500F, for example. 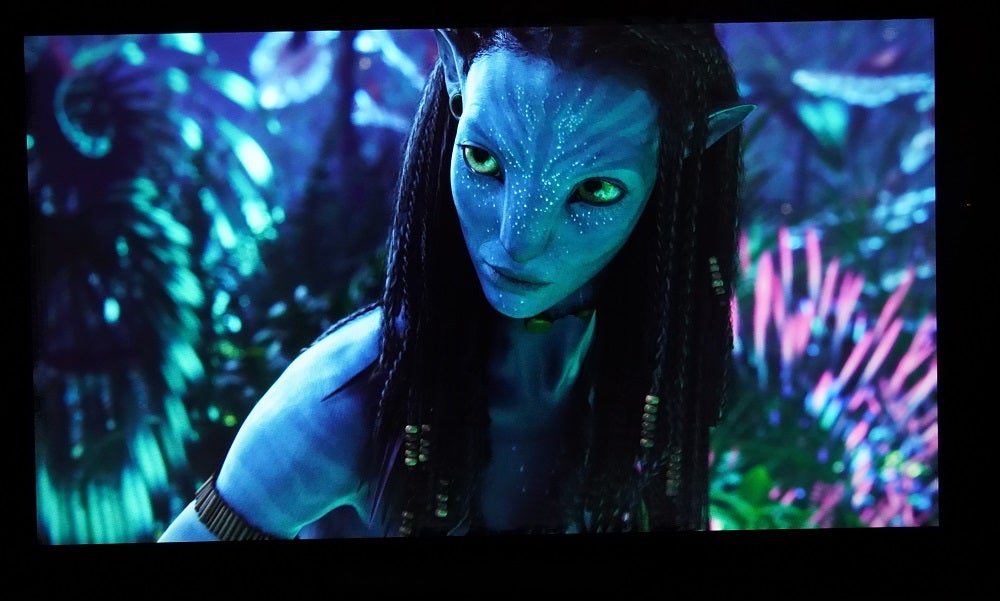 Audio is delivered via the set’s 2x 10W speakers. eARC support means it can pass through lossless audio, such as Dolby Atmos, to a compatible soundbar or system.

The 2019 RU7020 suffered from poor audio, and while the Samsung TU7020 won’t blow any doors down with its sonic ability, its clear delivery avoids sounding hushed or harsh. Voices are given good prominence, while bass is acceptable enough. There’s a decent amount of dynamism, but you can sense a ceiling to its performance. It’s fine, but a soundbar would improve upon it.

The TU7020 doesn’t have the AI skills of the TVs higher up in the Samsung range, but its upscaling performance at this price is some of the most impressive we’ve seen.

The Samsung TU7020 doesn’t boast the next-gen features for the PS5 and Xbox Series X, but it will deliver the fastest input lag to give gamers an advantage in multiplayer deathmatches.

Assembling the Samsung is super-quick and operating it is not too much trouble either.

If you’re still looking to stay within the budget realm, the LG UN70 puts in a brighter performance with HDR content but its black levels aren’t as good.

Samsung doesn’t support Dolby Vision, so you’re missing out on optimal HDR performance from the likes of Apple TV, Disney+ and Netflix.

The TU7020 only supports Wi-Fi 4, which is getting on a bit. Although we didn’t notice much issue, if you stream a lot of content, you may want to get a TV that at least has Wi-Fi 5. 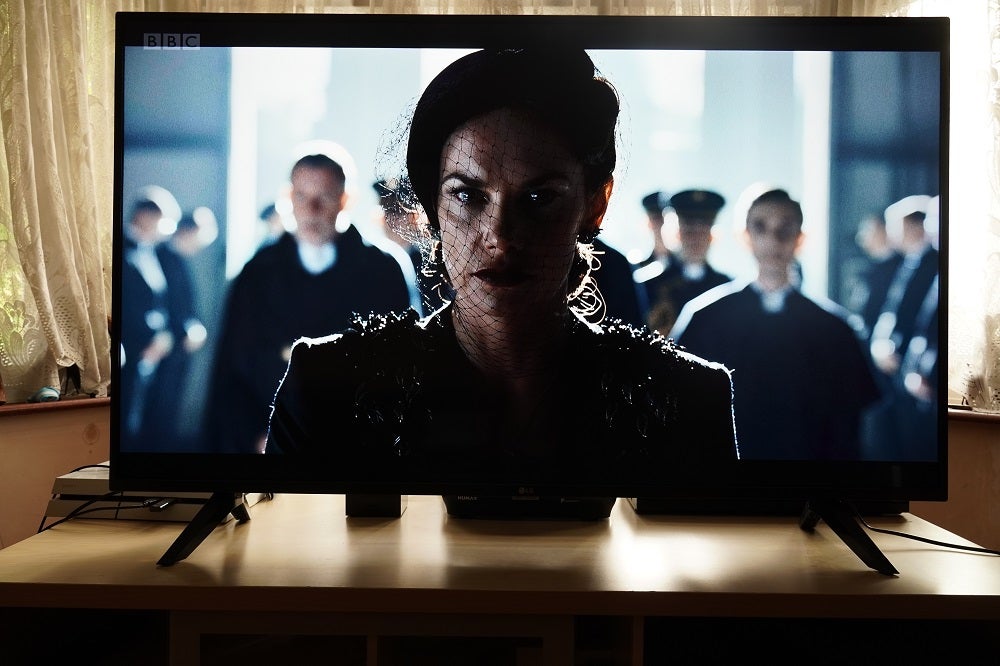 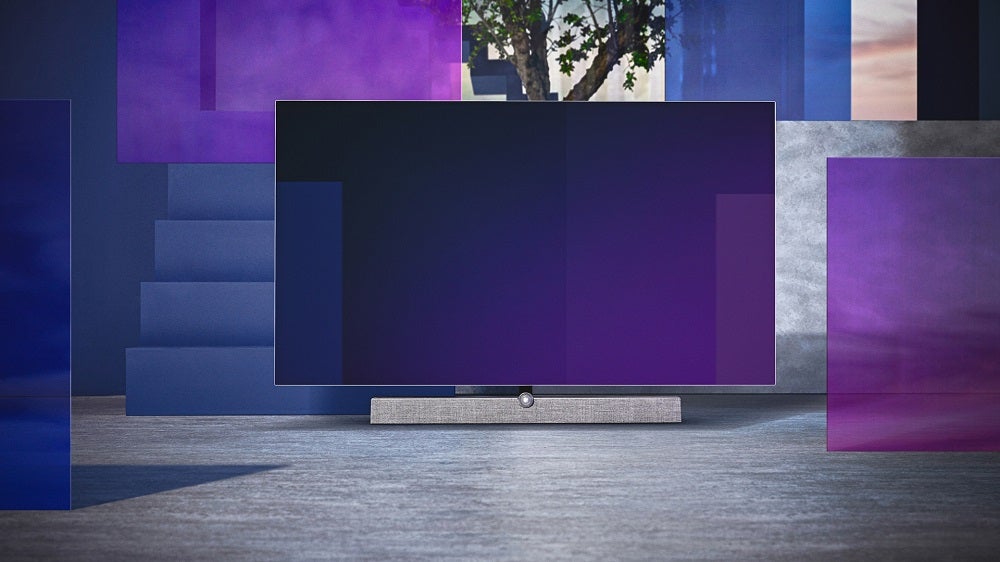 HDR10, HDR10+ and HLG are supported here. There is no Dolby Vision