Despite half as many dimming zones as the Q90T, the Q80T’s picture quality is impressive, characterised by plenty of detail and colour with 4K and HD content, which makes this set a great option for bright or dark rooms. With class-leading input lag and commendable audio, it’s great value at any price.

The Samsung Q80T (QE55Q80T) sits beneath the flagship Q90T/Q95T in the Korean giant’s 2020 4K QLED range. It retains several features found in the Q95T, but its main asset is that it does so at a more affordable price.

We reviewed the 65-inch earlier in 2020 and gave that five stars, revelling in its punchy HDR performance and excellent gaming performance. Can we expect more of the same with the 55-inch model?

The Q85T is effectively the same TV, but comes with an Anti-Glare screen, Wide Viewing Angle and the 4.2.2 OTS system that’s also in the Q90T.

Samsung’s design approach is very consistent across its entire range, but it often means models look indistinguishable from one another. 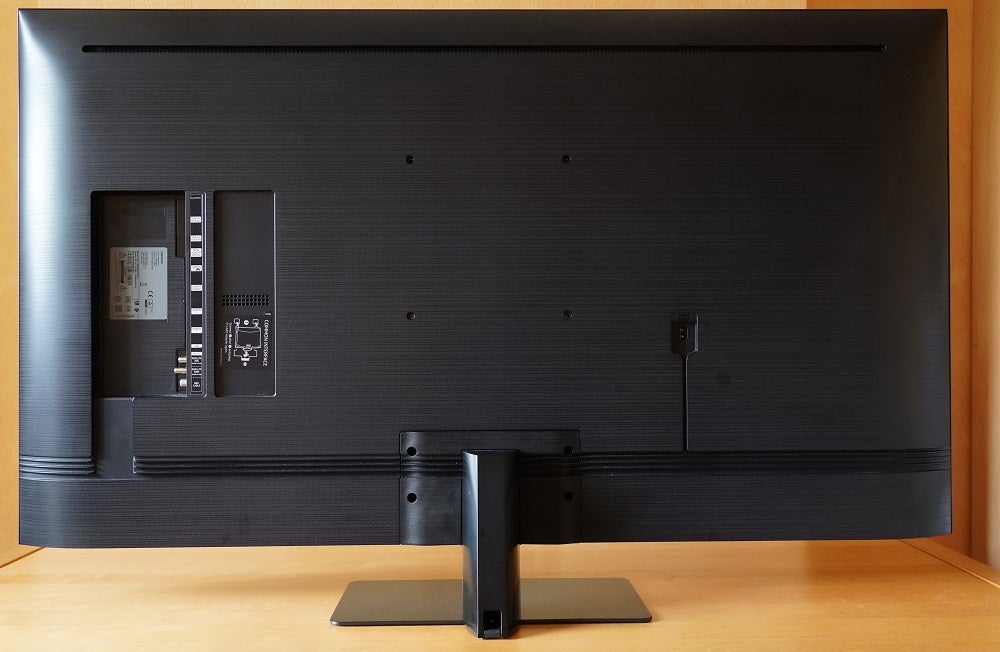 If that doesn’t bother, then you’ll appreciate the Q80T’s elegant and minimalist chassis. The thin bezel allows plenty of real estate for the display and the only noticeable change from the Q90T is the central stand, which offers solid support, and the bottom plate will happily allow for a soundbar. Samsung’s Q-series soundbars have been designed to integrate seamlessly with the TVs, and the Q80T offers enough clearance for a bar to sit below. 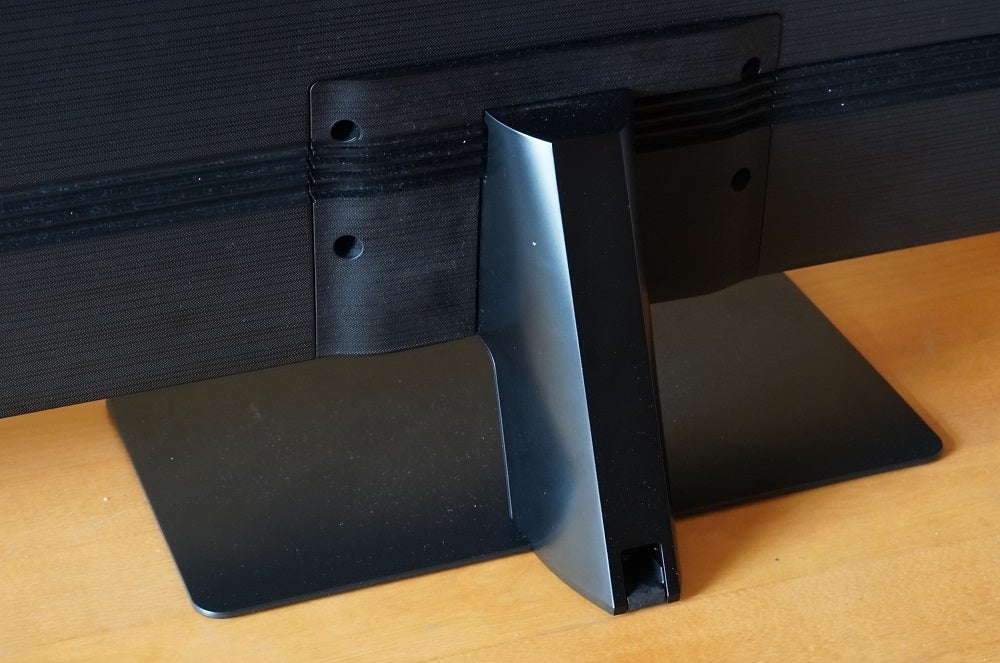 There’s a choice of two remotes: a standard Samsung remote and a smart one. The smart model is the version to go for since it feels good to use thanks to its ergonomic shape and the button lay out is simpler. The Q80T misses out on the One Connect, so the TV it’s slightly thicker than the Q95T at 1227.6 x 706.7 x 53.9mm (whd, without stand). 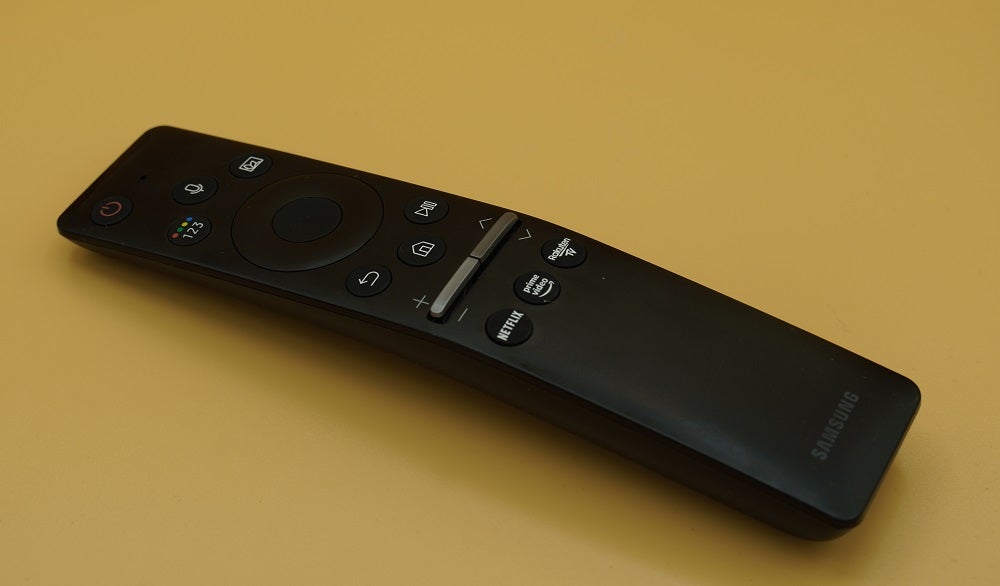 Connections on the TV are housed on the left-hand side of the unit, a slight issue for me as my setup is suited to connections on the right. It’s the one moment where I missed having the One Connect box.

Inputs and outputs consist of 4x HDMIs, a Digital optical out, 2x USBs, Ethernet, Common Interface, and the satellite and terrestrial antennas. HDMI 4 is reserved for gaming with 4K@120Hz; VRR (Variable Refresh Rate) and ALLM (Auto Low Latency Mode) supported. You can read more about these features in our HDMI 2.1 article. 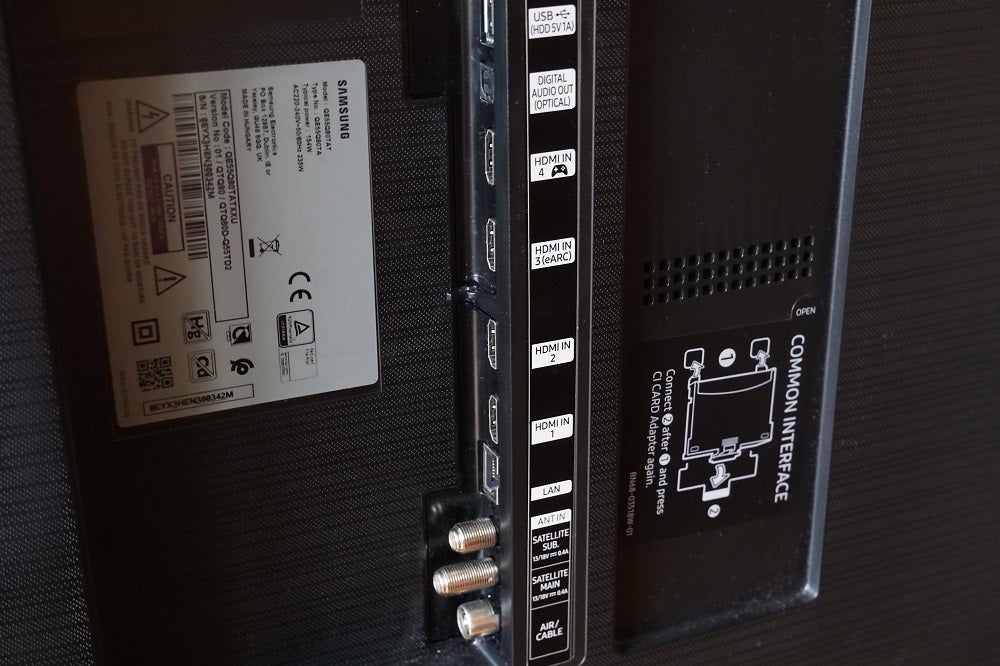 Further HDMI 2.1 features arrive with HDMI 3 supporting eARC for pass-through of audio formats such as Dolby Atmos. That’s also where you’ll need to park your eARC-compatible soundbar to get object-based audio.

The Q80T’s gaming credentials are further established with AMD FreeSync Premium, which reduces tearing and stuttering. Nvidia G-Sync is apparently waiting in the wings, but no date has been specified for its introduction. With Game mode activated, the Q80T delivers a class-leading 9.2ms of input lag. Activating Game Motion Plus adds some processing for a smoother image, dropping to a still very good 19.7ms. 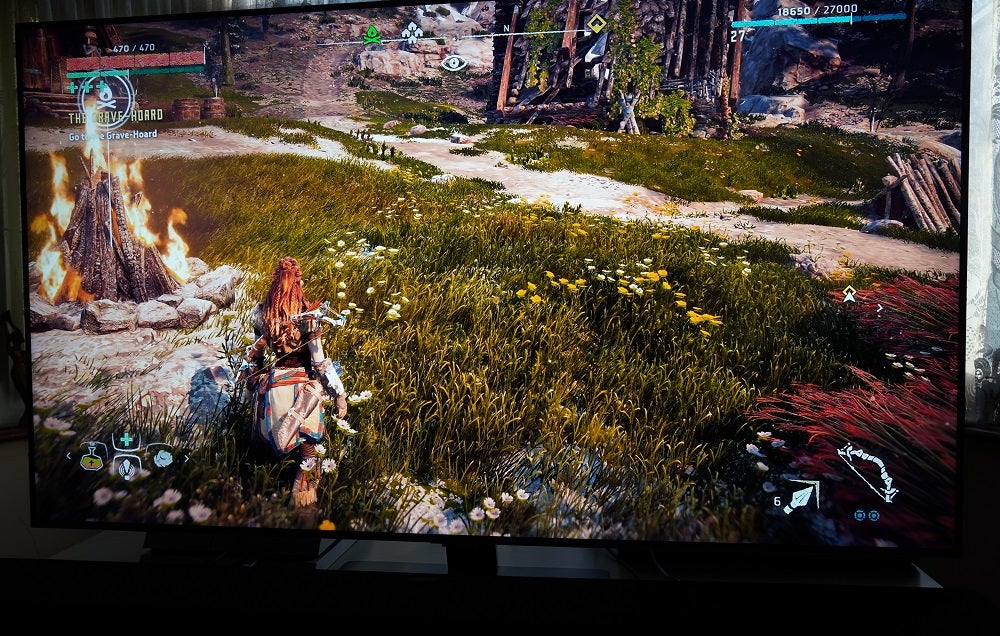 For films, the Samsung Q80T has Filmmaker mode, which disables any background processing. There’s no content available yet, so you’re better served by Samsung’s Movie setting.

Samsung’s Tizen operating system continues to be an excellent resource for streaming features: easy to use and with plenty of apps. All the main streaming and UK catch-up apps present and you can add BBC Sounds, as well as Britbox for UK users.

The SmartThings app offers another way to control the TV, turning your smartphone into a remote and it makes setup a doddle. As for voice assistants, Alexa, Bixby and Google Assistant are all now supported, and there’s AirPlay 2 for streaming from iOS devices. 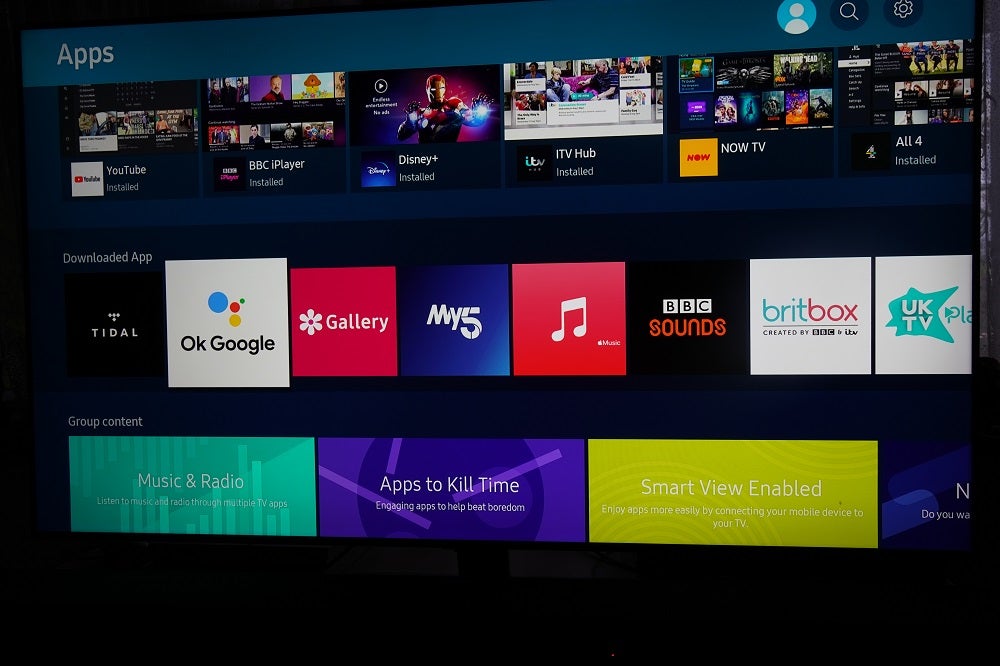 When it comes to picture quality, it’s worth noting the Q80T’s specs are an upgrade on the 2019 Q70R rather than a direct replacement for the Q80R – although just to confuse matters, the performance is closer to the Q85R.

Nevertheless, the Samsung Q80T is a slicker performer than all those sets. Black levels are perceptively inkier and deeper in depth. The Full Array Local Dimming (FALD) panel produces a more image full of contrasts, but shadow detail is diminished, which is evident in darker content such as V For Vendetta (4K HDR) or Mr Robot (HD SDR). 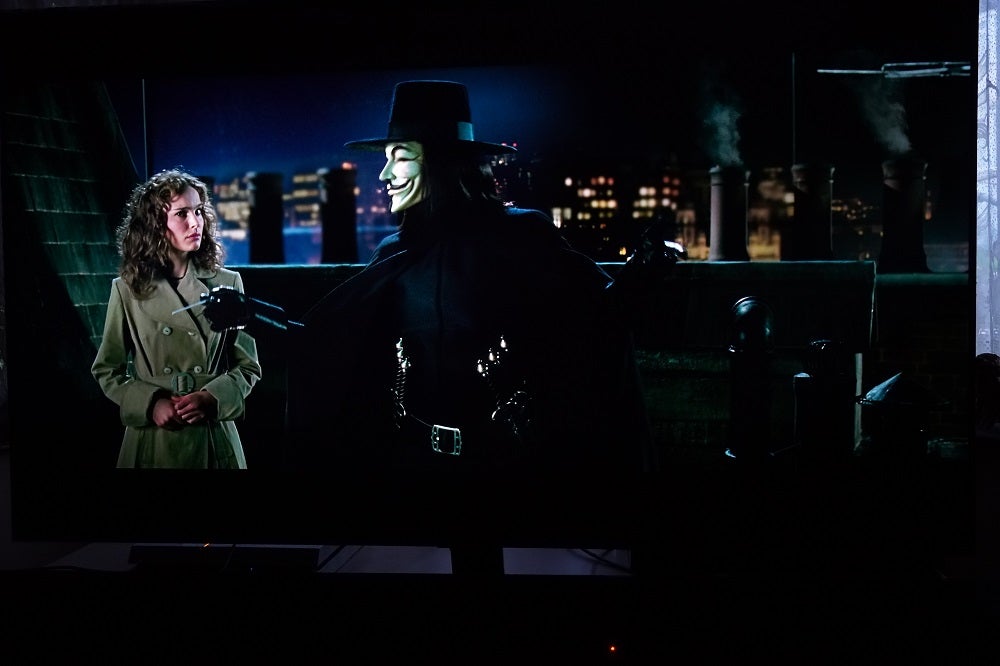 Fine detail is superb. The Martian offers excellent detail from the texture of the Martian sand and detail on the spacesuits (which looks amazing), to the steely, plasticky and shiny surfaces of NASA equipment. The Q80T showcases it all with an exacting sense of detail.

Complexions are handled with a sense of punchiness, too. Jessica Chastain’s pale complexion contrasts with the rest of the crew, as does Mackenzie Davis’ slightly warmer complexion compared to Chiwetel Ejiofor’s richer Vincent Kapoor. The Q80T’s ability to capture the variety of skin tones in a striking manner helps elevate this set above cheaper ones I’ve tested in recent times. 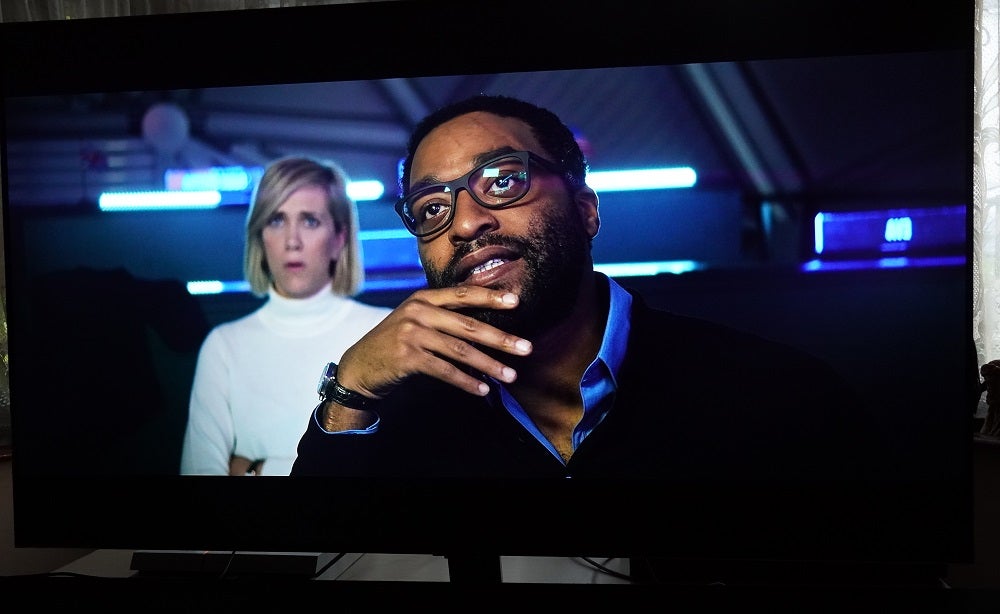 For HDR the Q80T has HDR10, HLG broadcast and HDR10+ dynamic metadata. Dolby Vision is left out again, and there’s still not as much content in HDR10+. It does offer refinement of brightness (luminance) and colours, but the difference is not as striking as Dolby Vision can be. 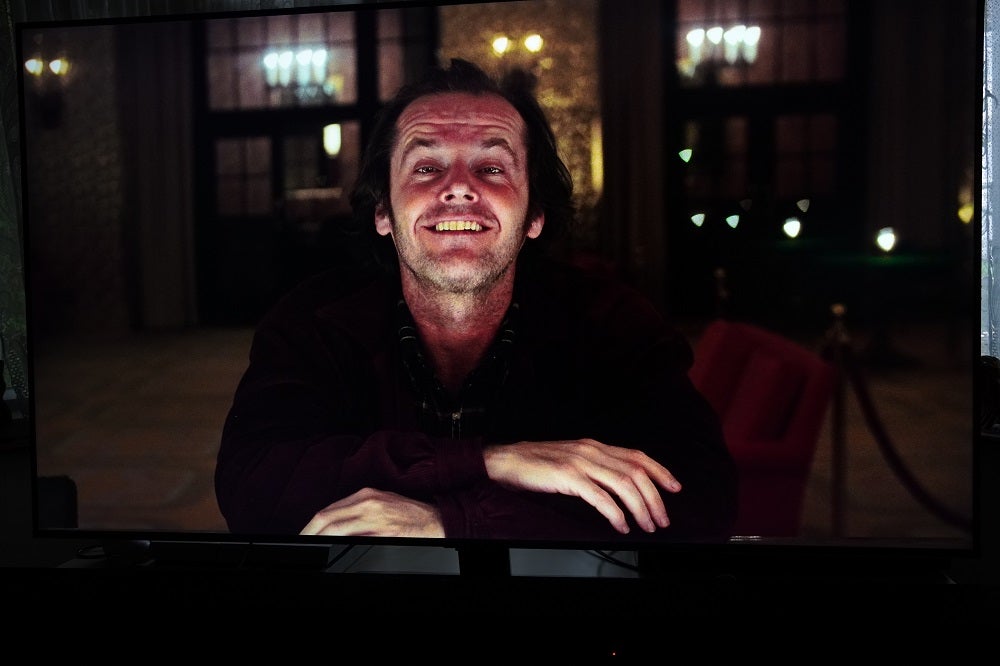 Still, the Q80T’s colours are portrayed in a bright and appealing manner. The rusty red of the Martian landscape is rich in look, and in Star Wars: Revenge of The Sith (4K Blu-ray) the Q80T produces punchy and vibrant images in HDR. Lightsabers have a vigour to their hue, while the fight on Mustafar between Obi-Wan and Anakin produces reds and oranges of eye-catching intensity. Highlights don’t have the intensity of Sony’s FALD sets, but blooming is less noticeable. 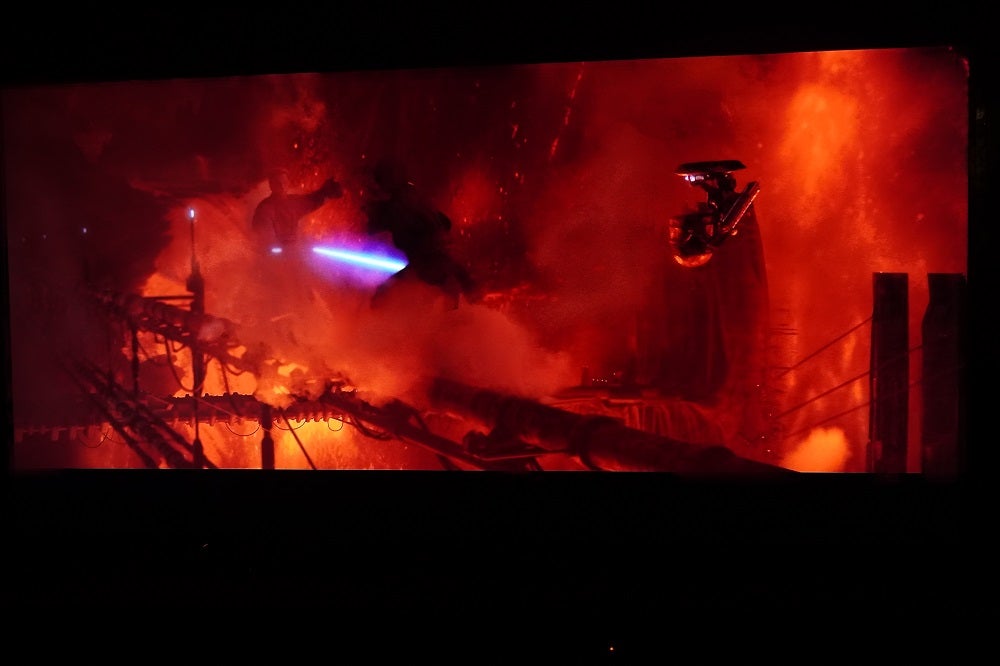 The reduction of blooming along with the set’s bright colours make the Q80T good for either a bright or dark room. The FALD panel is responsive, although it isn’t infallible. One issue I spotted was in First Man as the display flicked off as the Apollo 11 crew came around the moon for the first time (Chapter 16). As it didn’t crop up elsewhere, I’d put it down to the Q80T’s dimming algorithm outsmarting itself.

Like the Q95T, Samsung’s methods of tackling blooming exhibit themselves in the brightness of reduced smaller objects. When Chris sinks into the Sunken Place in Get Out, his falling figure flashes for a moment before reducing in brightness against the black backdrop. 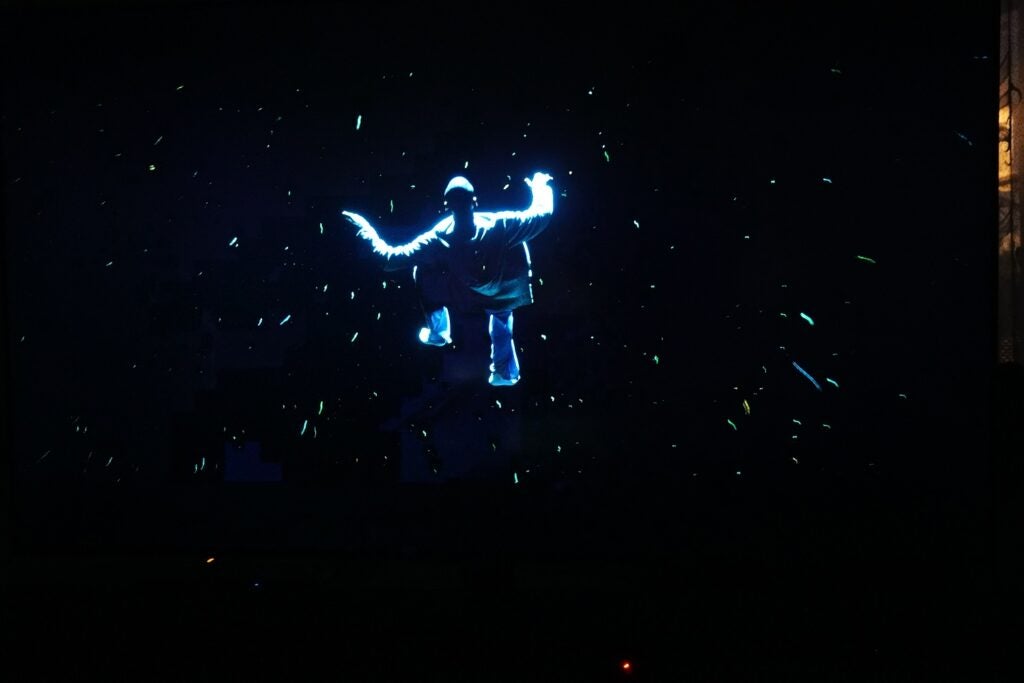 A similar situation occurs with subtitles. Parasite (HD) on Prime Video and the panel detects the subs but brightness varies. Words flash then dim, or the first few letters can be brighter than the rest depending on the scene. It’s small but worth noting for those who use subtitles a lot.

But, back to the positives. High-definition SDR content upscaled to 4K looks excellent, bearing the same characteristics in terms of detail, complexions and colours. Edge definition is handled well, and offers an improvement over the 2019 models, and the Quantum 4K processor with AI also puts in an impressive shift with standard definition content, too. 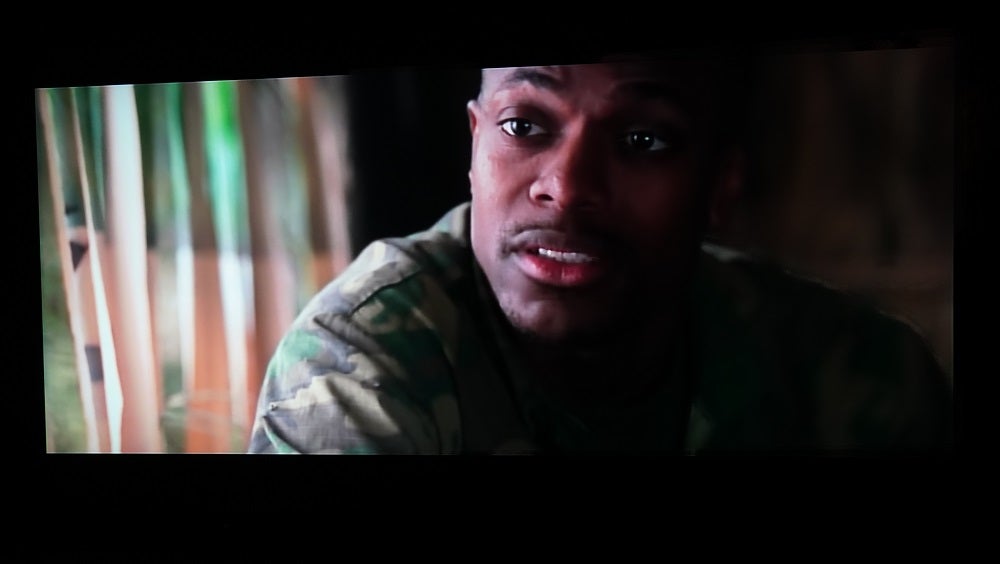 I watched Dead Presidents on an old DVD and although the picture is lacking in expected ways – detail and definition, as well as a softness and blurring with movement – yet it’s watchable with colours conveyed well and a decent amount of detail to faces and objects.

The Samsung Q80T is compatible with Samsung’s Q-Symphony feature that unifies sound from the TV and a supported Q-Series soundbar to create a wider, taller soundfield. This is further aided by the Q80T’s Object Tracking Sound (OTS). Made up of six speakers – two at the top, side and bottom – so the TV can track sound across the screen for a more immersive experience.

It’s expected that a flatscreen TV’s audio will be limited, but like the Q95T, the Q80T’s audio is respectable thanks to the object-tracking sound system. Listening to Parasite (Prime Video) through its 2.2.2 60W system and it produces a defined, wide soundscape. 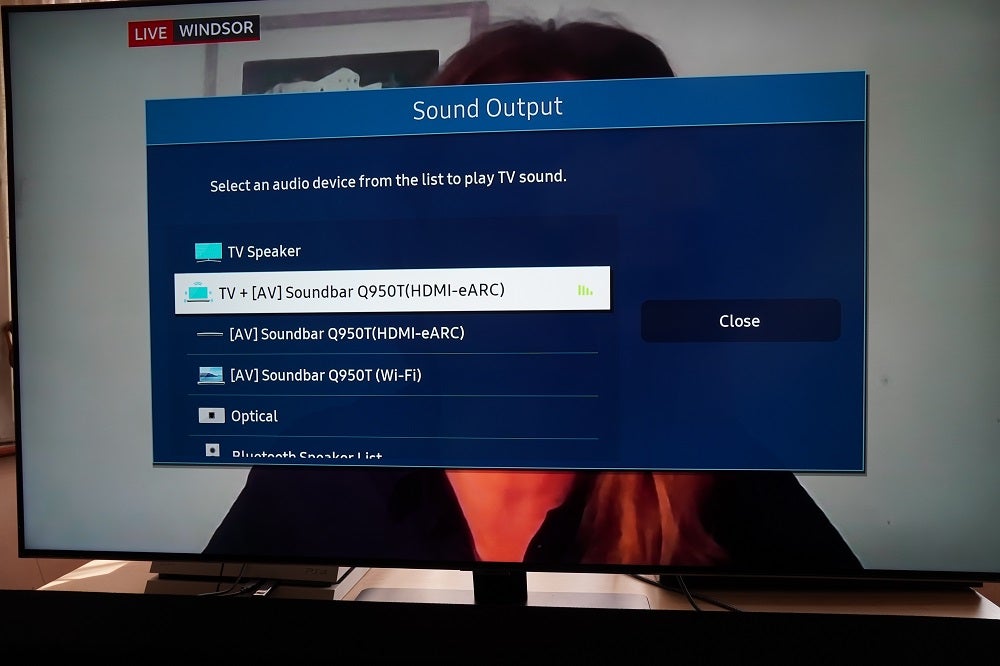 Clarity and detail levels are good, and dialogue is well done. Panning of sounds across the soundstage is recreated well, but perhaps most impressive is the width of the sound – off-screen voices and sounds off-screen can be heard just to the side of screen.

Pair it with a Q-Symphony-compatible soundbar and it’s even better, with the bass taken on by the soundbar for a firmer definition of low-end frequencies.

You should buy the Samsung Q80T if…

The Samsung Q80T is an excellent upscaler of sub-4K content, so if you watch lots of terrestrial TV or still watch Blu-rays and DVDs, the Q80T will make it look pretty good.

Like the QLEDs above it, the Q80T features extensive gaming skills that can take advantage of what the latest gaming consoles can offer. And QLEDs have the best input lag of any TV available.

We tend to recommend a soundbar to go with a TV and the Q80T offers a compelling reason why you should with its OTS system. Married with a compatible Samsung Q-Symphony soundbar and they’ll sync together to create a bigger, broader and better-defined soundstage.

You shouldn’t buy the Samsung Q80T if…

The Q95T is a few hundred pounds more, but if you can stump up the cash it’s even better than the Q80T.

A slight issue with the Q80T is that its dimming system can be over-zealous with applying brightness to subtitles. The effect isn’t bad and you can still see the words, but it can distract from time to time.

Sony’s XH95 is available at a similar price, and it unleashes the potential of HDR better than the Q80T, but it does bring blooming into the mix.