In the simplest terms, the UE43RU7020 is a small, affordable 4K HDR TV that masquerades as a larger, more expensive one. Bear in mind you'll need a speaker system to make up for the TV's audio deficiencies – plus we recommend you avoid using the set's less than useful "Eco" picture mode.

Samsung’s 4K HDR LCD TV model range starts with the small (43in), affordable (£339) UE43RU7020. At this price, with those dimensions, it’s designed to snare customers who may not be inclined to devote a lot of their bank balance, or their home, to watching television.

After all, just because the UE43RU7020 is the smallest and most affordable 4K HDR TV Samsung currently builds, it doesn’t automatically follow that it must be significantly compromised. Samsung has been at the cutting-edge of mainstream TV design and specification for quite a while now, and the RU7020 must benefit from the company’s expertise just as surely as the more glamorous models in its lineup.

On paper, it’s the Samsung’s unremarkable size and price that’s the most remarkable thing about it. 4K HDR TVs such as this are few and far between – so does the 7020 do enough to make you wonder if it’s worth spending more?

Given everything I’ve already mentioned about Samsung’s position in the pecking order, it would be optimistic in the extreme to expect anything out of the ordinary where design is concerned. And, sure enough, the UE43RU7020 is built of standard materials and is as functional-looking a product as Trusted has ever reviewed.

Just because it’s almost entirely plastic – bezels, rear panel, feet, the lot – that doesn’t mean the Samsung feels cheap. The back panel is nicely textured, the bezels are minimal, and the feet are quite elegant in their simplicity. There isn’t anything here that’s unpleasant to the touch – and everything fits perfectly. 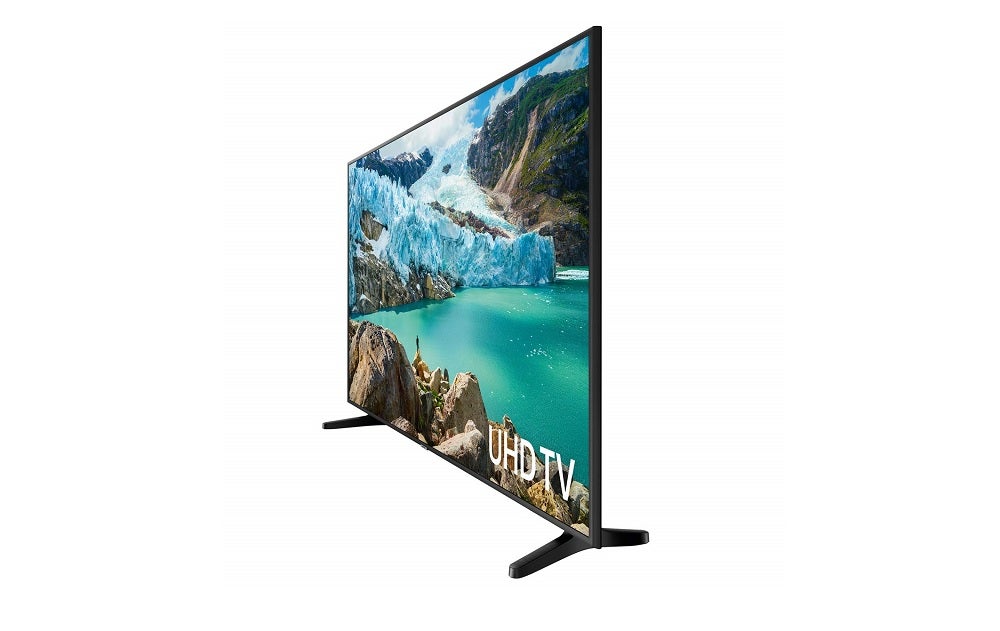 Those feet are quite far apart, mind, and given even this tiddly TV is H56 x W97 x D6cm (without stand), you’ll need a reasonably wide surface to stand it on. It weighs only 9.6kg, though, and it’s ready to accept quite a few different styles of wall-mount.

Anyway, all anyone wants from their new TV is optimal picture quality (when it’s switched on) and unobtrusiveness (when it isn’t) – and, certainly, as far as “unobtrusive” goes the UE43RU7020 is as good as any pricier alternative.

£339 buys you a 43in screen of 3840 x 2160 resolution, one that’s also packing HLG – the broadcaster-standard version of HDR – as well as HDR10+ dynamic metadata capability, too. Naturally, the screen is an LCD affair, edge-lit by LEDs.

It’s fitted with HDMI 2.0 sockets, one of which is ARC-enabled, and there are component and composite analogue inputs too. An Ethernet socket guarantees online stability (there’s integrated Wi-Fi, too), and there are a couple of USB inputs (note that neither will do PVR duty).

Other ins and outs run to a digital optical socket, a CI slot and an RF aerial pole; there’s no satellite tuner here. Bluetooth and Apple AirPlay 2 complete the connectivity story.

Obviously there are a number of viewing modes available here, all offering colour- and contrast-balance variations on “neutral”. The two most notable are Eco (which will be discussed in more detail in the Performance section of this review) and Game.

It’s worth pointing out, here and now, that gamers will love this TV’s 10ms response time. Input lag just isn’t an issue, and that in itself might be enough to sell it to console enthusiasts.

One one hand, the UE43RU7020 has by far and away the best interface of any nominal rival. Samsung’s Tizen-based smart TV interface is similar to that incorporated into its flagship QLED TVs costing ten times this amount, and consequently it’s impeccable.

It’s fast, clear, simple to understand, logical to operate, straightforward to customise and doesn’t hog the entire screen when it’s up and running. Good luck trying to find a non-Samsung TV at this sort of price that comes close.

On the other hand,  – and it’s a big hand, the sort of hand that’s admired in goalkeepers – the brilliant OS is navigated using a remote control of such unyielding unpleasantness that it virtually takes your breath away. The remote handset is small, feels cheap, and features way too many buttons – the majority of which are too small to be operated with any confidence. 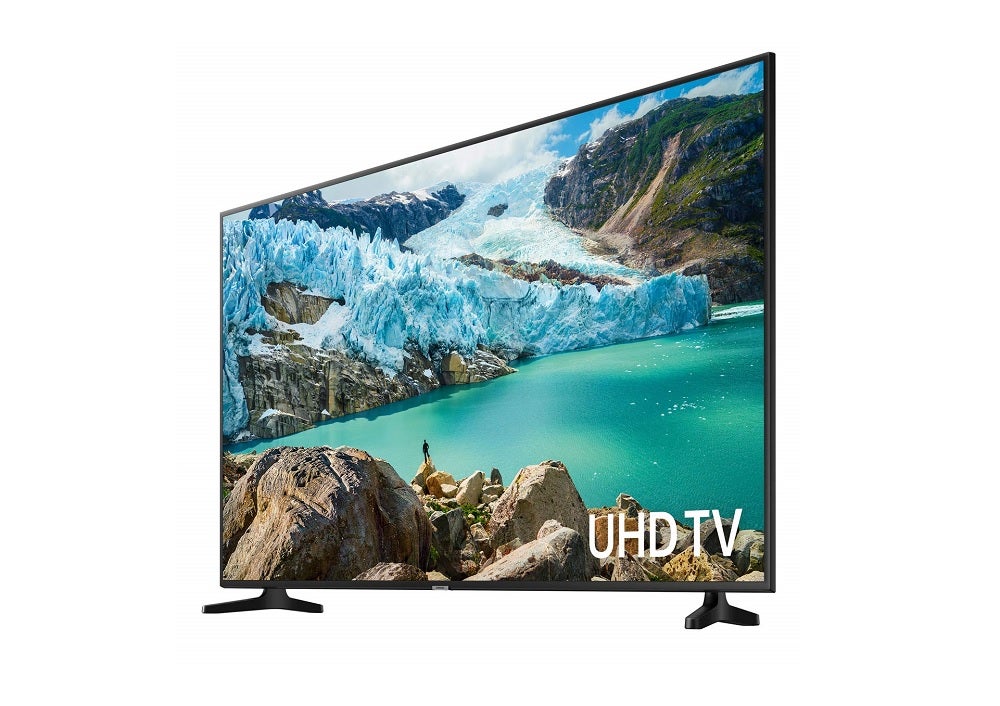 The fact that the very few buttons of realistic size are direct access controls to the likes of Ratuken TV only adds to the impression of an utter lack of care.

Up to this point, the UE43RU7020 has done its utmost to suggest you haven’t taken the cheap option. The remote control just makes you feel like a cheapskate. And while there’s basic voice control available if you put the 7020 on the same network as a mic-equipped Google Assistant or Amazon Alexa device, the majority of control will be using the remote. Thus, every time you pick it up, you’ll wonder if you shouldn’t have bought a different TV after all.

Samsung UE43RU7020 performance – It’s a dab hand with native 4K content and proves to an accomplished upscaler, too

Fear not, though – you shouldn’t have bought a different TV, not if this is the sort of money you have to spend. Select the channel you want to watch, set your preferred volume level, set the remote control to one side and revel in the Samsung’s numerous picture-making attributes.

First, it’s a pretty accomplished upscaler of sub-4K content. Let’s face it, out in the real world the RU7020 will spend a lot of its time dealing with 1080p material (and probably content of a lesser standard, too) – and the Samsung is generally very effective at doing so.

The numerous skin tones and textures in evidence during the BBC’s Question Time are all dealt with skilfully; there’s plenty of detail revealed, good colour consistency and very acceptable contrasts. It’s a similar story where the more testing The NFL Show is concerned.

Sporting highlights shows are notoriously tricky, what with their constant and unpredictable movement, and big blocks of uniform colour. The Samsung maintains a strong grip on motion, keeps picture noise down to unobtrusive levels, and draws edges with a steady and confident hand. 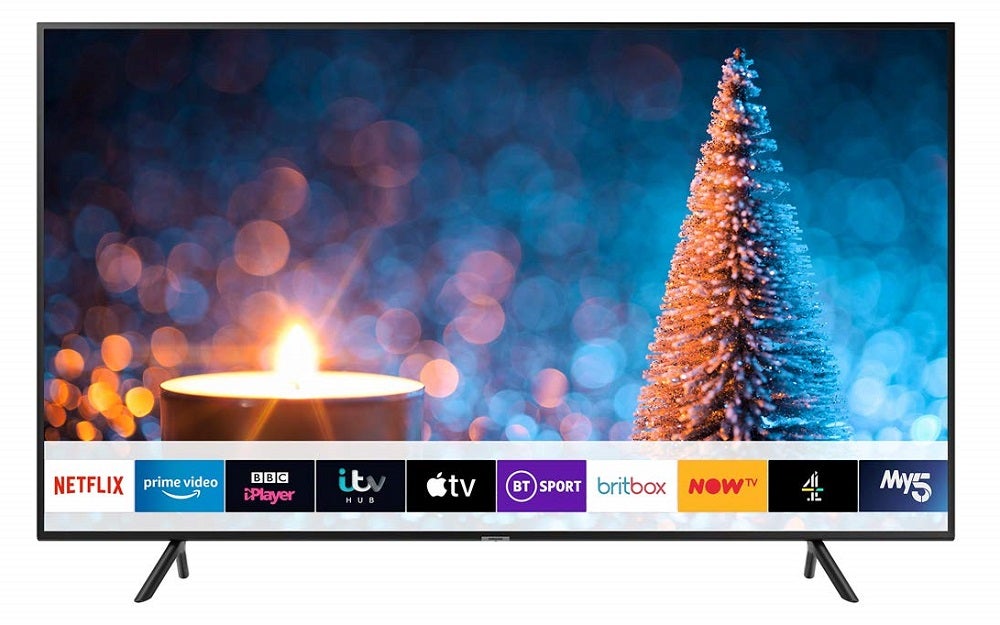 Obviously, this TV isn’t without its shortcomings. The Samsung can struggle with black-tone detail and differentiation in particular – there’s quite often crushing of black tones down to uniformity. But by prevailing standards, the UE43RU7020 fills every one of its pixels confidently when it’s upscaling lower-res material.

Give it some native 4K content and the news gets better. The jaw-dropping food-porn of Netflix’s Chef’s Table enjoys a wide-ranging colour palette of vibrant accuracy, and the levels of detail go through the roof.

Up the game still further with Amazon Prime Video’s “cast of thousands” interpretation of King Lear and the HDR-assisted picture quality is impressive in almost every respect. Skin tones and contrast are entirely convincing, the 7020’s black-tone tribulations all but disappear, and detail levels go from “impressive” to “prodigious”.

At its most potent (when handling a 4K Blu-ray disc of Hot Fuzz with HDR10+), the Samsung is a match for some screens costing twice the money. It balances same-scene instances of deep black and bright white well, it grips onto motion tenaciously, and there’s real depth to the few real long-shots in the movie.

It delivers convincingly natural images, walks the line between “vivid” and “overblown” well where colours are concerned, and serves up utterly convincing textures. 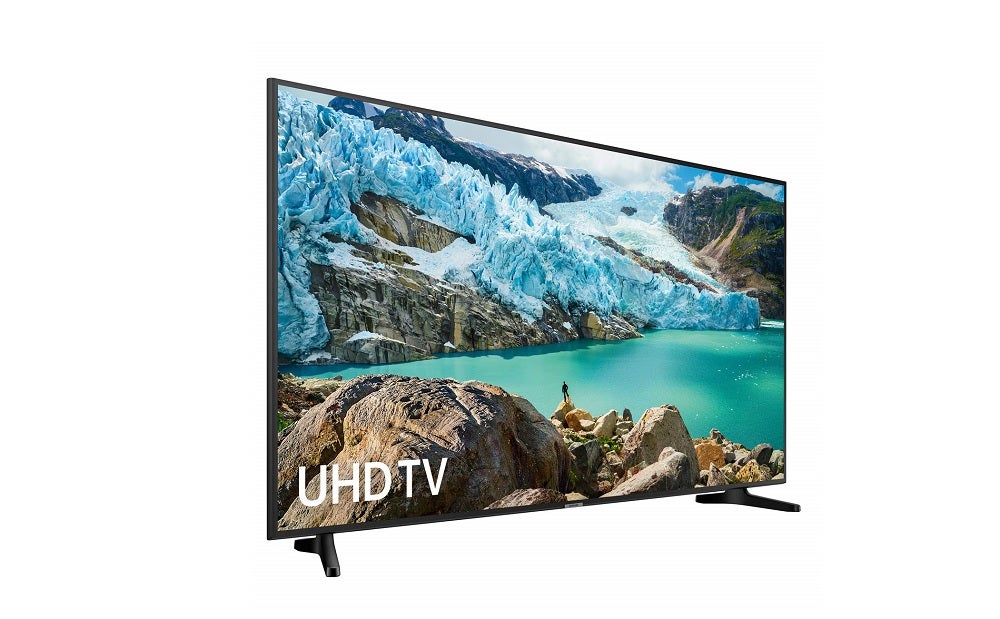 All of the above holds true in every picture mode setting bar Eco. As far as the RU7020 is concerned, Eco is shorthand for “the ruination of your HDR picture quality”. The Samsung is terribly uncertain of itself with this mode engaged, hunting between HDR brightness levels anxiously and restlessly. Our advise is that you leave it well alone.

The only other area where the UE43RU7020 is anything less than impressive is sound. The TV has tricked out with a couple of full-range drivers, each driven by 10W of power – and there’s no doubting the clarity and directness of the 7020’s audio delivery.

It’s predictably short of bass extension and power, of course, but what’s less understandable is the thin, sibilant nature of its sound. At half-decent volume it can verge on shrill, and that’s no way for a TV to sound. Make use of the 7020’s HDMI ARC or digital optical outputs, or suffer the consequences.

In the simplest terms, you should buy the UE43RU7020 because it’s a small, affordable 4K HDR TV masquerading as a larger, more expensive one. Think long and hard about how you’re going to route the TV’s sound, be aware that the Eco picture mode is much more trouble than it’s worth, and you really can’t go far wrong.

Having said that, you always have options – it’s just that they’re not all that numerous in this instance, certainly not if you want to buy a TV from a brand with critical reputation. The obvious alternative is LG’s very agreeable 43UM7500PLA. It’s similarly priced and specified – and, if anything, it’s even more impressive with HDR material than the Samsung. It’s off the 7020’s pace when it comes to black levels, contrast and detail levels, though.

Other than that, options are second tier. The best of these is probably Hisense’s H43B7500, which has most of the specification, if not the performance, of the Samsung, and is significantly cheaper too. But then, at this sort of screen-size and spec you definitely get what you pay for – and I’d find the extra cash and go with the Samsung if I were you.