The Hisense A7500F is ambitious for its price, but it struggles with both its picture and sound. Some may enjoy its bright, punchy colours with upscaled content and Dolby Vision helps the tone mapping and colours, but overall, there are more accomplished budget efforts available such as the Hisense R50B1720UK. The gaming performance is excellent though and may be of interest for those looking for a TV that can double up as a gaming monitor.

The A7500F plonks itself in the mid-range of Hisense’s 2020 line-up, offering up Dolby Vision HDR at a price that’s wallet friendly. Available in 43- and 50-inch guises (the latter reviewed), is the A7500 worth your cash?

In terms of where you can purchase the A7500F, John Lewis and Partners is stocking it. You can find it on eBay too, but prices are more expensive than purchasing direct from John Lewis.

Like the U8Q reviewed earlier in 2020, the A7500 is a handsome-looking set, especially for the asking price. You could have expected another indistinguishable mould of black plastic in the same fashion as the LG UN70, but from the unit’s slim frame to its integrated stand and good finish, the Hisense A7500F looks nice in the middle of a room. 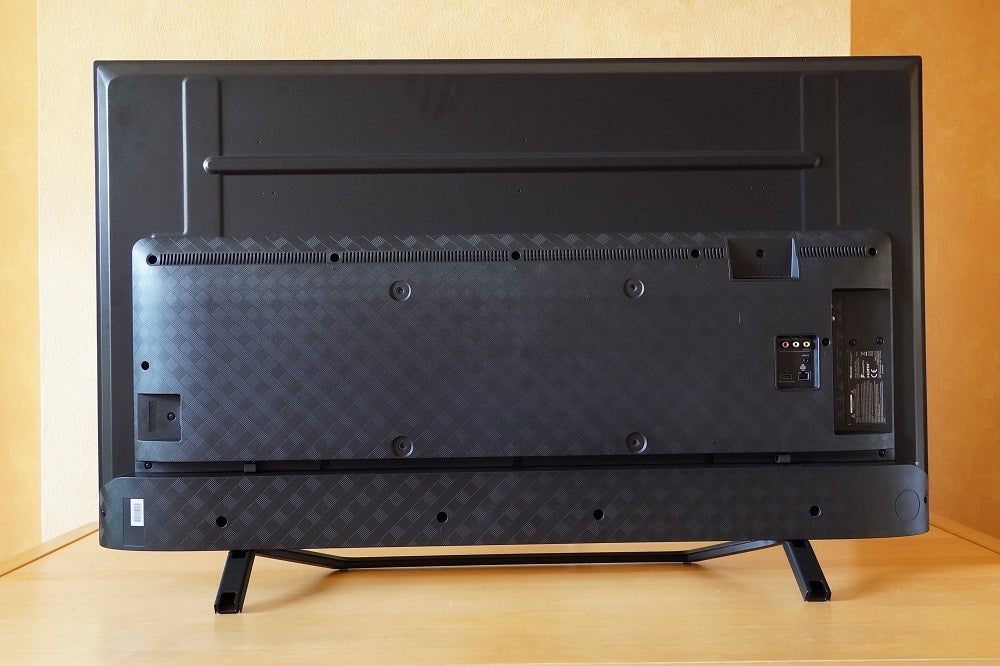 What’s good about it? The bezel is unobtrusive, giving the screen plenty of real estate, and the set depth is surprisingly slim (1112 x 645 x 79mm, whd without stand), which may appeal to those who favour wall-mounting. Assembly is quick and easy, and I was flicking through the TV’s set-up options within minutes. 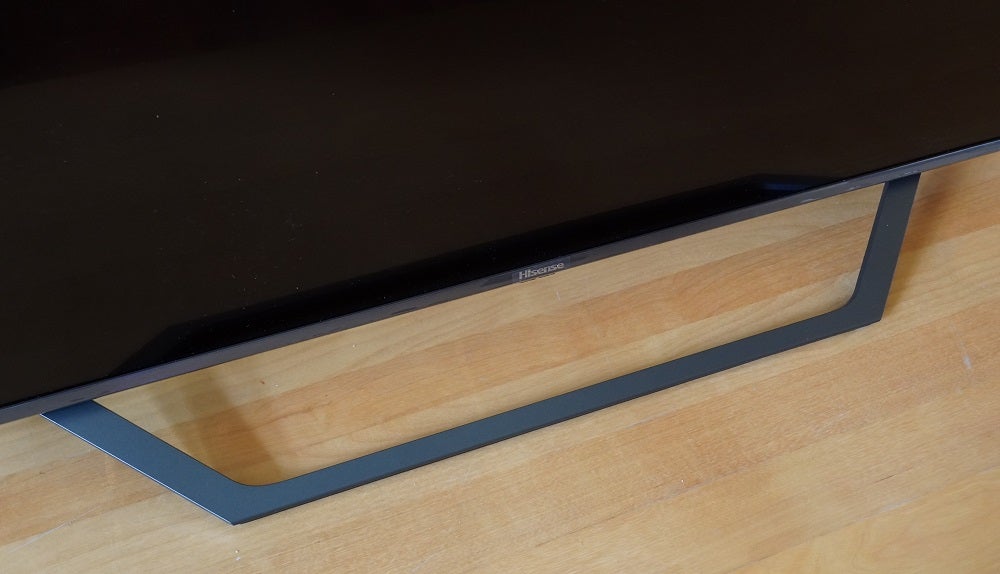 There’s a cable management system around the back, but there appears to be space for only one cable to pass-through. The remote, while plasticky, is comfortable to use with buttons laid-out logically. On the remote are shortcuts for apps such as Prime Video, Netflix, YouTube, and YouTube Music, as well as Freeview Play.

Quite often cheaper sets have a basic look and feel, and the Hisense A7500F bucks that trend. Cheap sets don’t have to look this good.

Hisense’s VIDAA U v4.0 smart portal avoids the gloss of an LG webOS or Samsung Tizen for a nuts-and-bolts presentation. All the obvious apps are there in Netflix, Prime Video, YouTube and Rakuten TV, and in Freeview Play there’s access to UK catch-up apps.

Log-in to Netflix and it will occupy the top row of the UI. You can create a VIDAA account but that’s only necessary for keeping the TV up to date with the latest firmware. For Disney+ or the Apple TV, an additional streaming stick is needed. Other smart features include Alexa voice control via the Remote Now app. 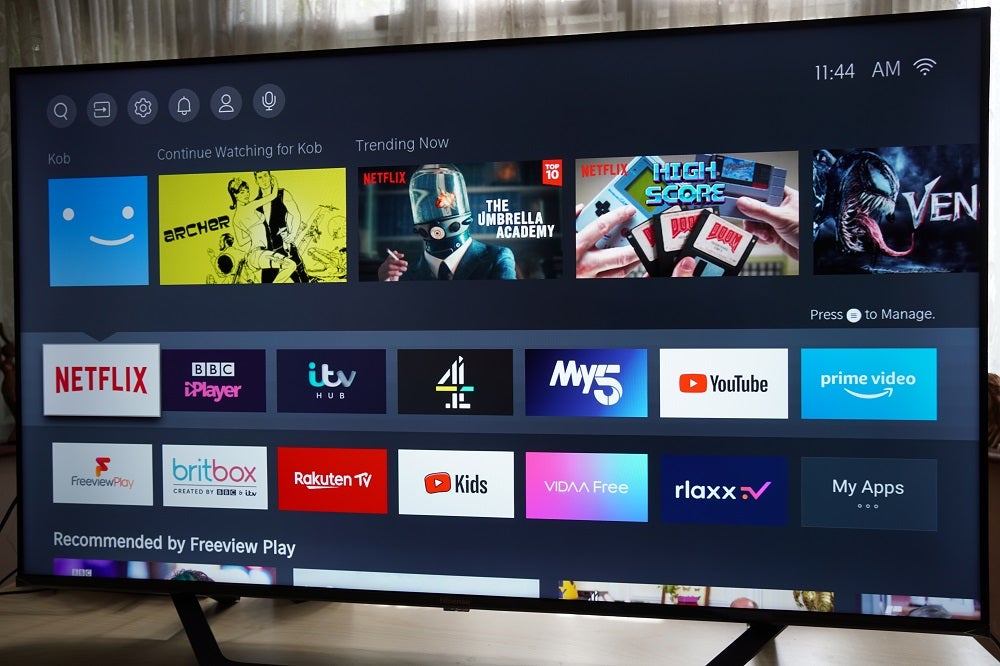 Connectivity is rote and covers the main bases. There are 4x HDMI 2.0 (4K/60Hz), 2x USB 2.0, LAN, Digital Optical out, a CI+ 1.4 Slot, along with a composite input and satellite and antenna RF connections. Wirelessly there’s Wi-Fi (natch), Bluetooth 4.2 and DLNA compatibility if you’re streaming from other devices on the network. 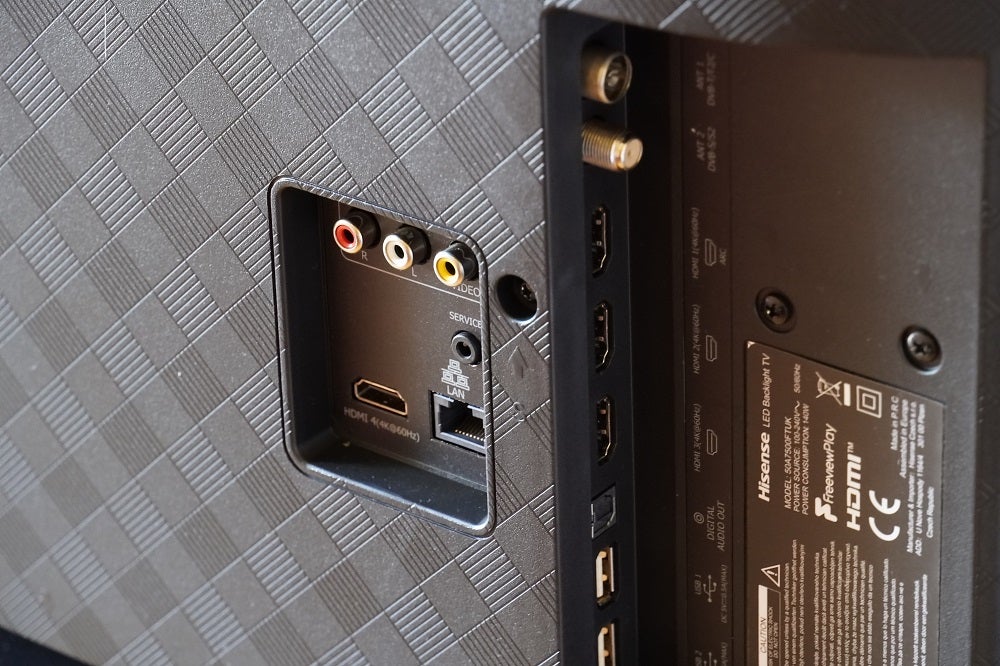 Like the U8Q the A7500F features an 8-bit + FRC panel, so it will be doing some processing to create HDR images instead of delivering a native 10-bit picture. The backlight is DLED (Direct LED) and as such the A7500 doesn’t come with local dimming skills, something that’ll be a factor in terms of contrast and black levels. In terms of gaming the Hisense A7500F excels, achieving a latency of 10.8ms. That’s up there with the likes of Samsung and LG.

When it comes to its picture performance the Hisense A7500F is a distinct disappointment. A bright spot (quite literally) is its HD broadcasts, which show off the set’s bold and vibrant colours, making for a more expressive image than normally expected at this price point.

It’s a set that favours brightness over detail though, which makes it more suitable for bright rooms than dark ones. Problems start to stack up as HD broadcasts lack clarity, definition, and detail, especially in the darker parts of an image. Despite carrying Hisense’s UHD AI Upscaler, there’s quite a bit of noise and shininess that I can see too. 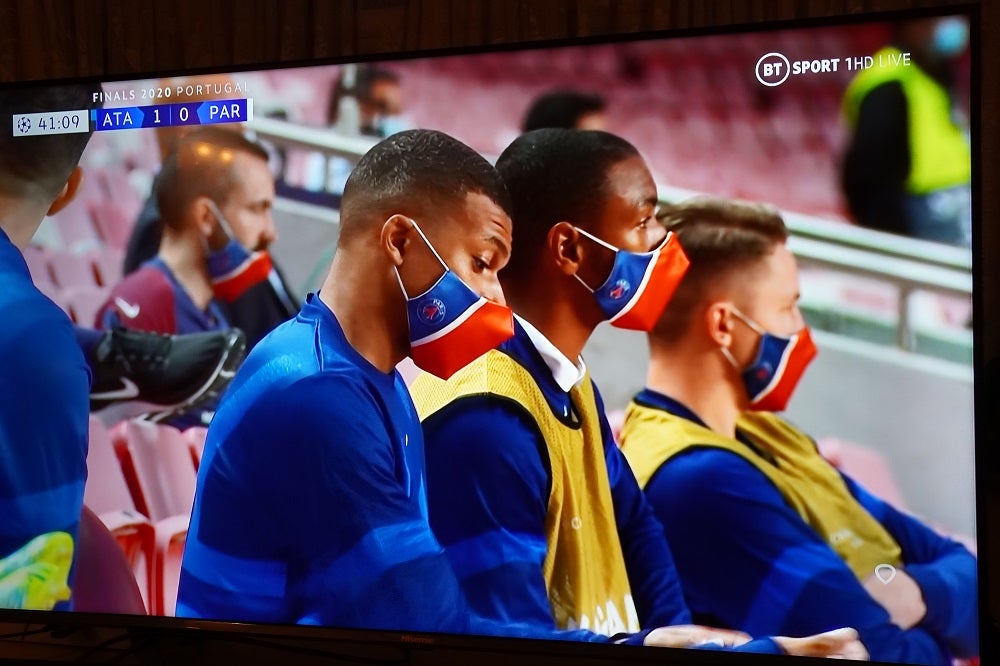 Wide angles are limited as colours lose their intensity as soon as you go off-axis. 4K content on the display looks decent – the set’s talent for expressive colours makes Le Mans 66 an appealing watch.

But in a similar fashion to the (now discontinued) Toshiba U29, there’s more noticeable vertical and horizontal banding with HDR content, with strips on the sides and the bottom. I also spot bleed in the black bars above and below that distracts from what’s on screen. 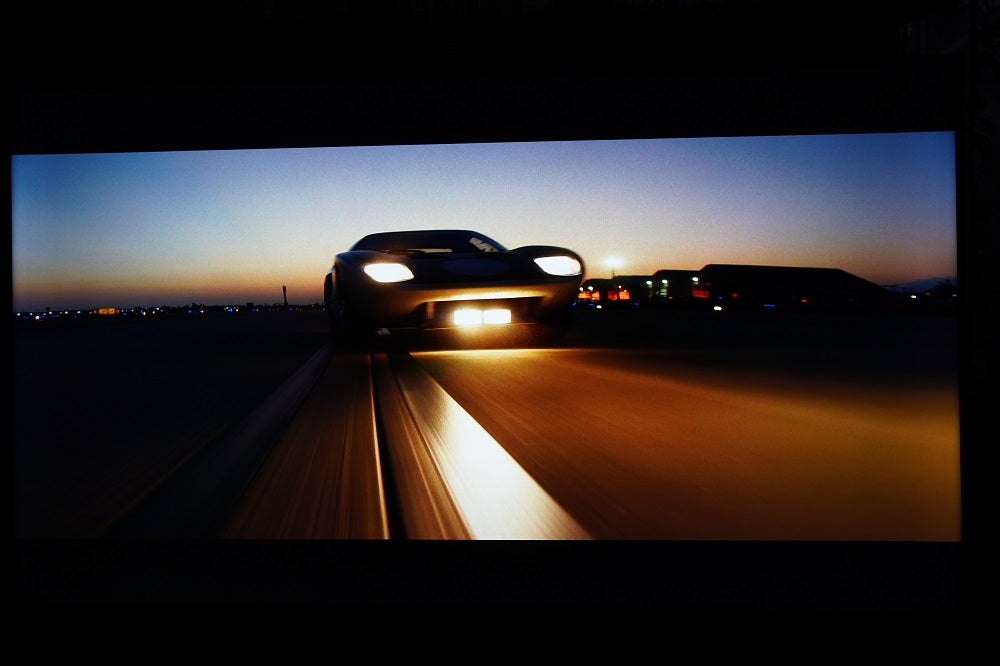 Its black levels are weaker than the similarly-priced Samsung TU7020, as it struggles to describe the Bane vs Batman sewer fight in The Dark Knight Rises with much depth and definition. Colour reproduction adds to its woes, rendering the warm orange glow of Phantom Thread’s opening scene with a bluish tone instead. 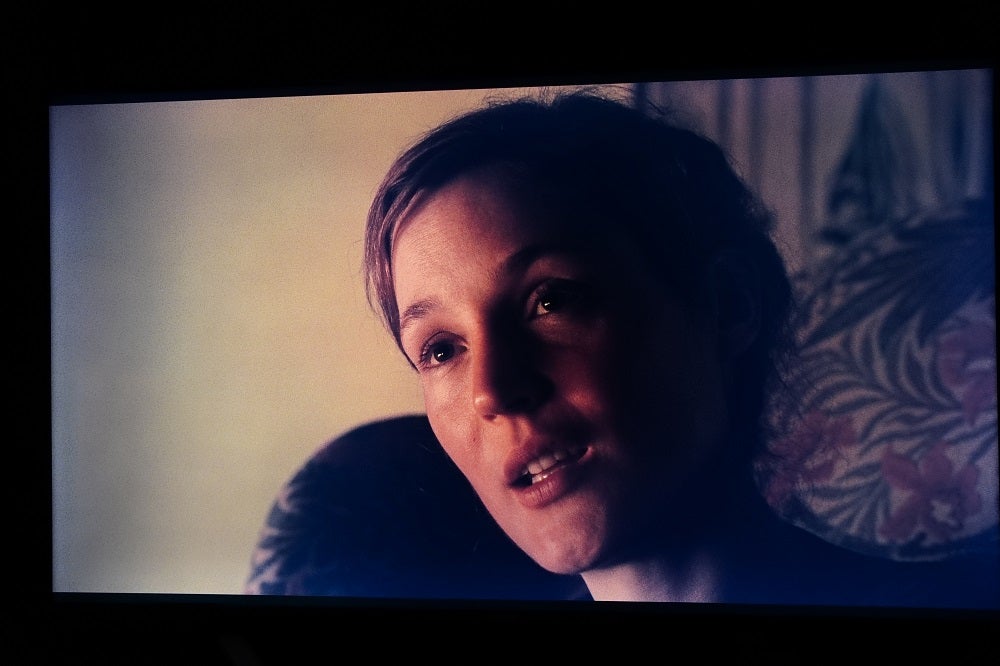 Motion is another aspect the set struggles with and something I’ve noticed on other Hisense sets. The A7500F especially struggles adapting its motion handling to content from connected devices. Streaming Tottenham Hotspur: All or Nothing from a Fire TV Cube and motion artifacts are visible. Streamed from the A7500F’s Prime Video app and it’s better but there are still issues. I’d leave the motion setting off, but if you do use it, Smooth seems the best compromise. 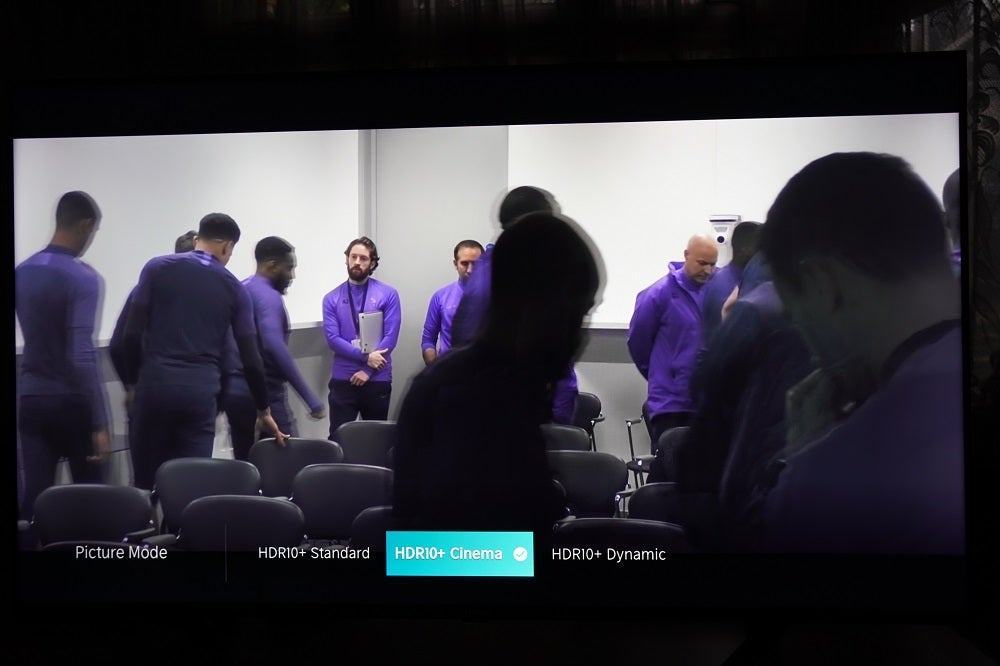 HDR covers HDR10, HLG (used by BBC iPlayer and Sky Q) and Dolby Vision, which you don’t often find at this price but is welcome. The A7500 can decode HDR10+ content, but the TV did not receive certification. Slightly disappointing is the lack of support for Wide Colour Gamut (WCG) for a broader range of colours with HDR content.

Dolby Vision certainly helps for a more nuanced picture. The make-up on Joaquin Phoenix’s face in Joker is more accurate – white instead of the green overtones. The image looks brighter, taking advantage of the dynamic metadata to portray the film’s intended look. The HDR10 version looks darker and offers less pop in comparison. 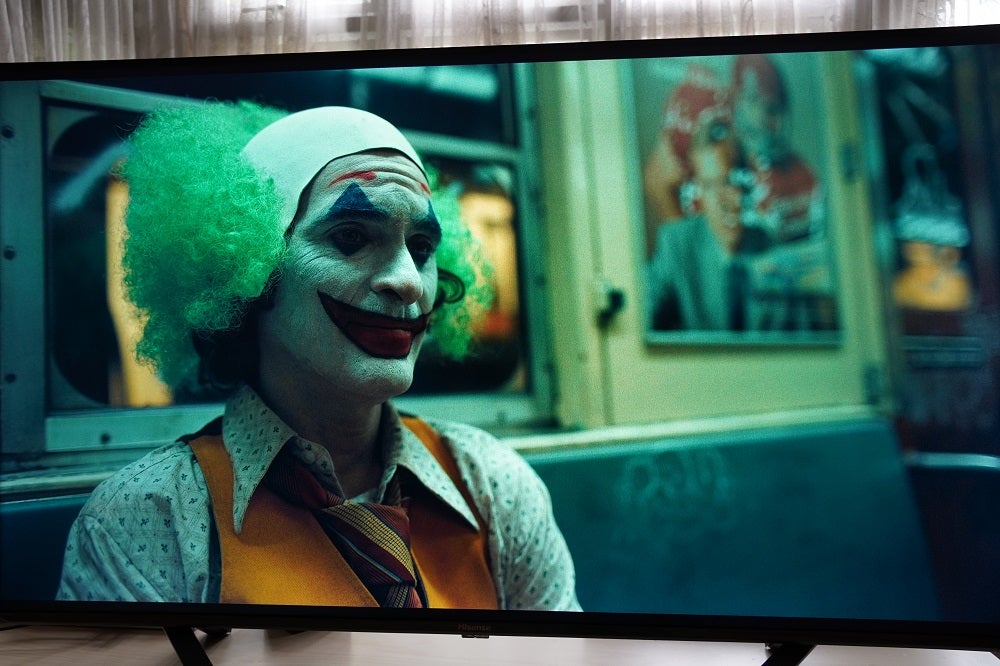 But for all the good DV’s tone mapping offers, the motion issues crop up again. The scene in Skyfall where a bartender makes a martini in a Macau casino, and as she shakes the mixer it smears and pixelates across the screen rather nastily. 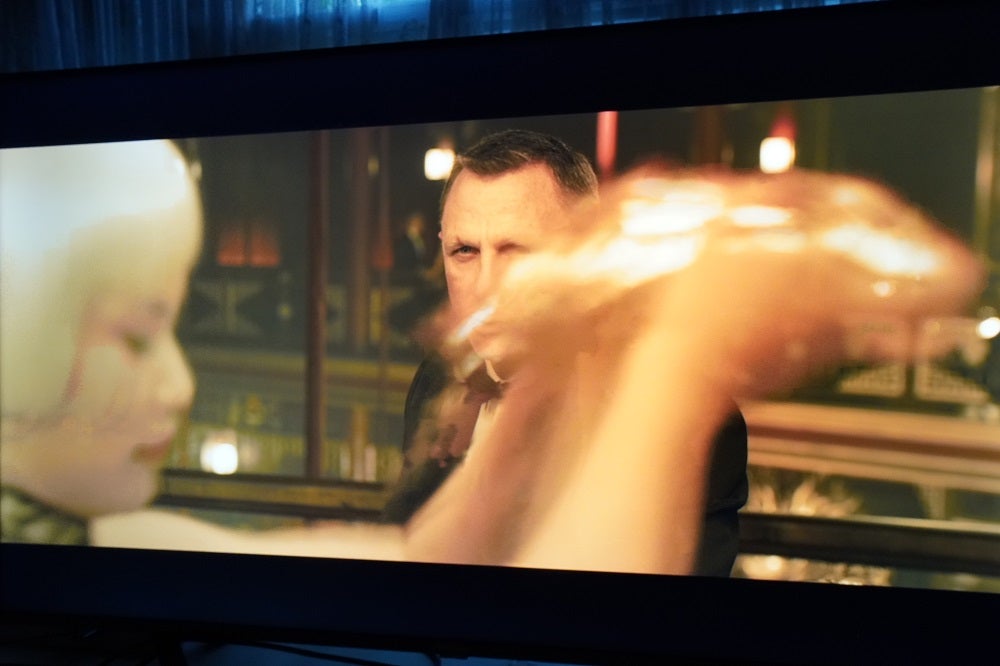 Just to compound matters further, the audio is a muddled disappointment. The TV’s 2x 7W speakers offer decent dialogue reproduction but that’s about it. Despite having Dolby Audio and DTS Virtual:X, and the sound has a squashed aspect to it.

There are ok aspects about it. Switch to Football mode and it serves to make the ‘fake’ crowd noises more pronounced and draws out the commentary. Theatre mode proves to be the most expansive, but no matter which mode is chosen, the same issues crop up. If you are set on this TV, get a soundbar to go with it.

The A7500F’s gaming skills are excellent. The 10.8ms of latency is better than some of the bigger and more established TV brands.

If you’re looking to scrimp on the pennies, then this is a Dolby Vision set for less than £500. There are better alternatives, however.

The squashed and muddled aspect to the Hisense’s audio set-up will mean a soundbar should be on the menu. Flatscreens typically struggle, but the Hisense struggles more than most.

Unless you’re watching Dolby Vision content you won’t get a big boost with 4K HDR films. Black levels are weak and without Wide Colour Gamut, the array of colours is not as wide as it could be.