QLED is more than just a bloody-minded alternative to OLED; it’s a very viable technology

As evidenced by the Q80R, Samsung has had something of a change of heart. The company isn’t about to bin its QLED quantum-dot technology in favour of the OLED alternative that most of its rivals are employing – it’s too committed, and too bloody-minded, for that. No, Samsung has decided its QLED technology needs to be democratised a little.

This time last year, QLED was all about the flagship models. The biggest and priciest screens had every conceivable bell and whistle attached, but moving down the model ranges saw QLED specifications become meagre pretty quickly.

It’s all change for 2019. This Q80R may not have the all-encompassing spec-sheet of the Q90R reviewed here a few months ago, but it’s still a well-equipped TV. And it’s cheaper than its big brother, too.

So can Samsung bring some of its QLED smarts to a more affordable price-point without taking the shine off its range-topping models? Let’s find out.

QLED starts at something of a disadvantage here. Since they’re built around LCD technology, QLED TVs don’t have the crowd-pleasing showroom appeal of the ultra-thin OLED alternatives; this QE55Q80R measures 62mm deep, which by 2019 standards makes it a bit of a biffer.

In addition, it weighs in at a not-inconsiderable 18kg, which means you should think long and hard about attaching it to a plasterboard wall. 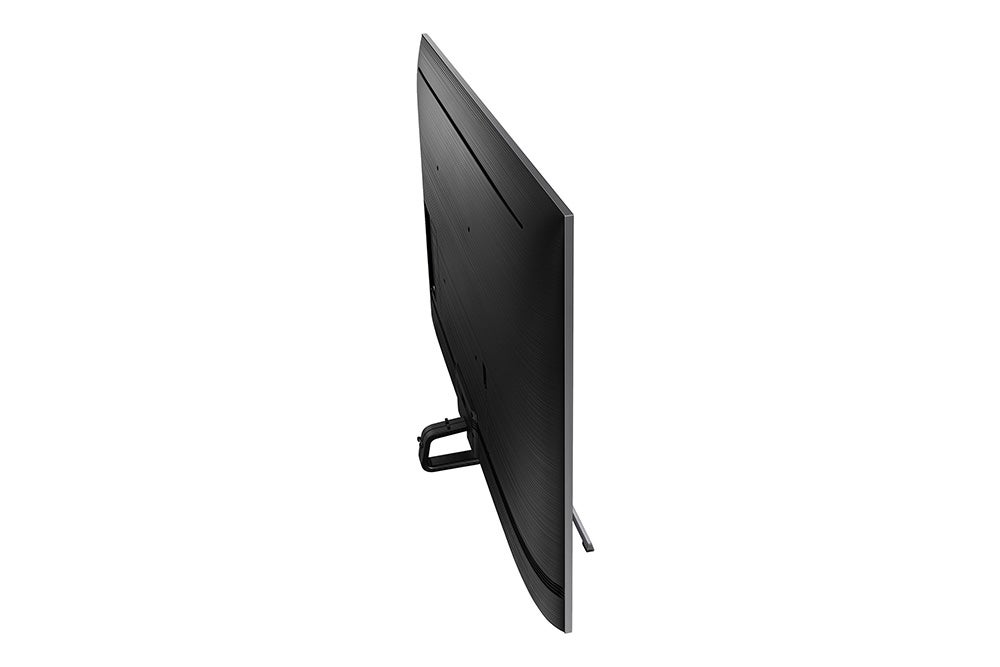 Ignore its unfashionable depth and weight, however, and the QE55Q80R is quite an elegant TV. The minimal metallic bezel is nicely curved at the corners, and (if you’re not wall-mounting it) the stand is central.

This may not sound like a big deal, but the inexplicable fashion for great big TVs with a foot at either end – which necessitate a surface almost as wide as the screen itself to stand the TV on – needs undermining at every opportunity. The stand also puts a useful amount of distance between itself and the bottom of the screen, so there’s room for a soundbar.

Certainly, there’s nothing about the way the Q80R is designed or finished that indicates it comes from a distance down the Samsung QLED pecking order. The range-topping Q90R is no better looking, is only fractionally slimmer and is a wee bit heavier.

The biggest indicator of the Q80R’s position in the QLED lineup concerns Samsung’s brilliant One Connect box – or, in this instance, the lack thereof. More expensive Samsung QLEDs have all their connectivity, including mains power, removed from the screen itself and housed in a separate box, which leaves just one very thin cable running from the screen. The Q80R goes without, which means all connections must be made to the back of the TV itself. 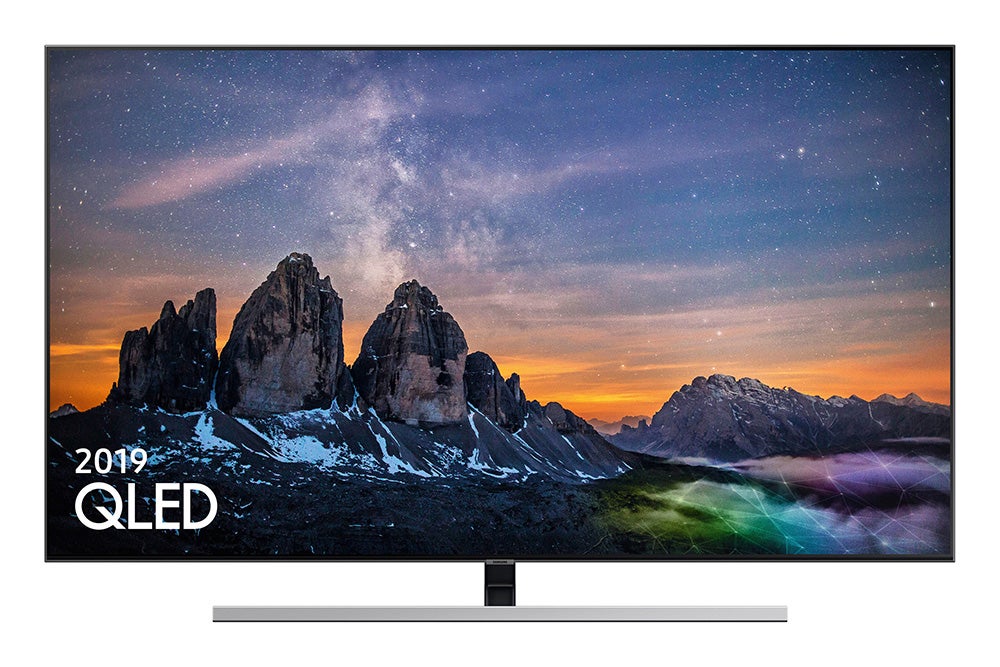 There are plenty of connectivity options, too. Aside from mains power (obviously), the Q80R includes four HDMI sockets, a brace of USBs, Ethernet (Wi-Fi is incorporated too, naturally), a terrestrial TV aerial socket and a couple of satellite TV aerial connections.

The Q80R is also giving away some HDR-maximising brightness to its more expensive sibling. While a peak brightness rating of 1500 nits is something several rival manufacturers would quite possibly kill for, it compares unfavourably with the Q90R’s 2000-nit maximum. And although there remains a full array of local dimming, there are fewer dimming zones here than seen on the pricier screen.

The Q80R keeps pace with its more expensive sibling by including HDR compatibility for HLG, HDR10 and HDR10+, while foregoing Dolby Vision support. Given their relative price tags, it’s an omission that’s easier to handle on this screen.

Want control options? You got ‘em – there’s bound to be a control method here to suit you.

You could use one of the two remote controls. The first is a fairly humdrum handset, recognisable from the entire Samsung TV range. It has too many buttons, and many of them are too small, but it’s at least comprehensive.

Or there’s the smaller, slimmer, altogether curvier wand with just the essential control options on it – it’s identical to the handset bundled with the Q90R, except here it goes without the premium faux-metal finish it enjoys when it comes with the more expensive screen. 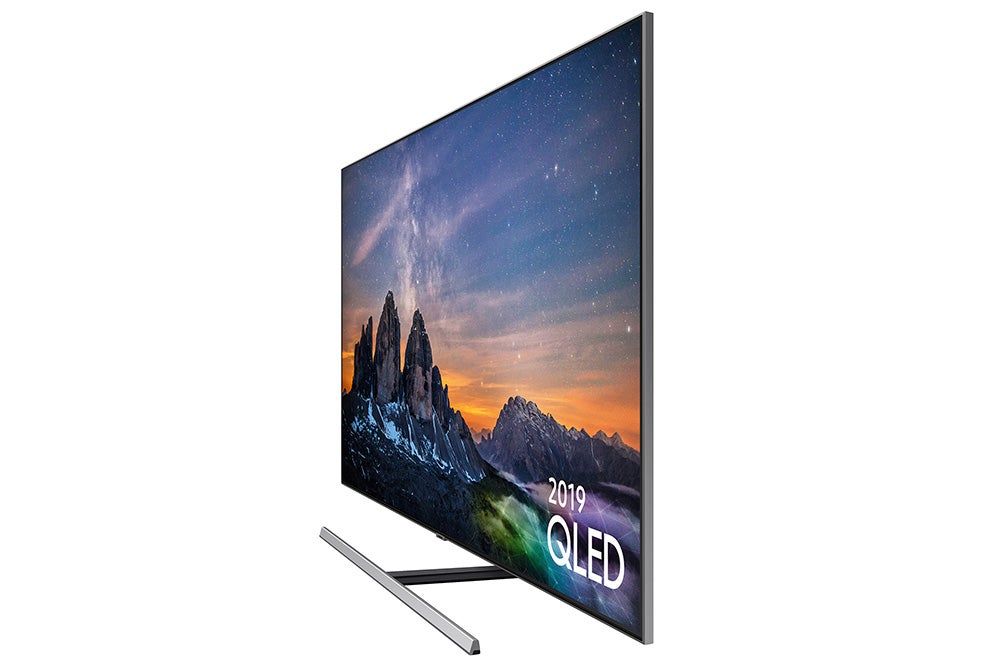 If those options seem a bit 20th-century, there’s always Samsung’s SmartThings control app for iOS and Android. It’s clean, stable, wide-ranging and logical – which sets it apart from quite a few rival brands’ alternatives.

For ultra-modernity – if not absolute convenience – there’s always the option of issuing spoken commands. The Q80R can be understood (most of the time) by both Google Assistant and Amazon Alexa.

No matter how you choose to interact with your TV, you’ll be operating one of TV-land’s least compromised user interfaces. It’s simple to change input, select streaming services, fine-tune the settings (Thankfully, Samsung keeps options brief) or adjust the volume, and the graphics are clean and legible.

Hard-wiring a 4K Blu-ray player to the Q80R should give the Samsung every chance to look its best – and, sure enough, with a disc of Christopher Nolan’s Dunkirk spinning, the Q80R’s combination of lifelike colours, vivid contrasts and assured motion impressed and charmed in equal measure. 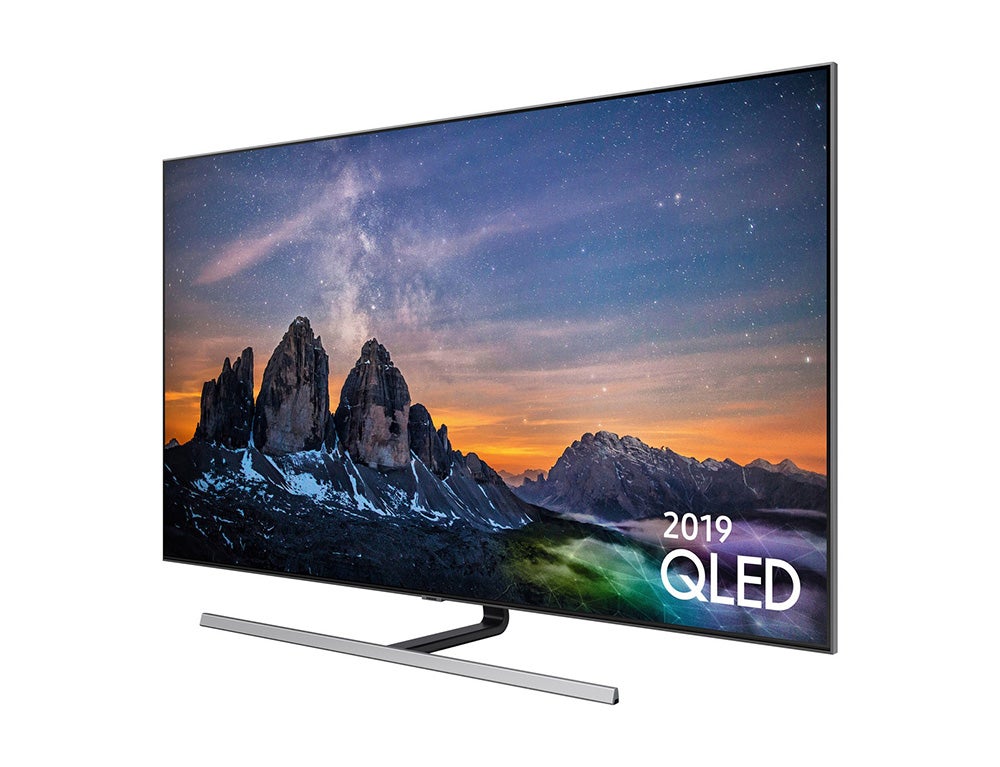 Skin-tones and -textures are convincing, and the Samsung manages to balance bright whites against dark backgrounds without either sacrificing detail or introducing any noticeable haloing. Detail levels are high, noise levels are low and motion is, by and large, handled with great confidence.

It’s possible to detect the TV working hard when the effects are piling up and the on-screen action is hectic and unpredictable, but such moments are rare. In almost every instance, the Q80R managed to control on-screen movement smoothly.

The Ultra Wide Viewing Angle technology is effective, too. Black tones retain most of their depth and detail, even if you’re watching from quite an off-axis position. Colours can’t maintain their dead-ahead vibrancy, but there’s markedly less of the washed-out effect Samsung’s QLEDs suffered from pre-UVA.

Streaming 4K content is an equally enjoyable experience. The splendid A Series of Unfortunate Events on Netflix confirms the Q80R as a high-detail, high-contrast performer, and demonstrates the same authority where even the most testing motion is concerned.

The generally murky colour palette doesn’t pose too many problems, the Samsung proving able to differentiate between shades of grey quite happily. Note, though, that the odd moments of vivid colour (which mostly centre around Lucy Punch’s wardrobe) don’t have quite the “pop” of a disc-derived equivalent. But that’s of negligible consequence; the Samsung’s streaming performance will make your streaming service subscription look like money very well spent. 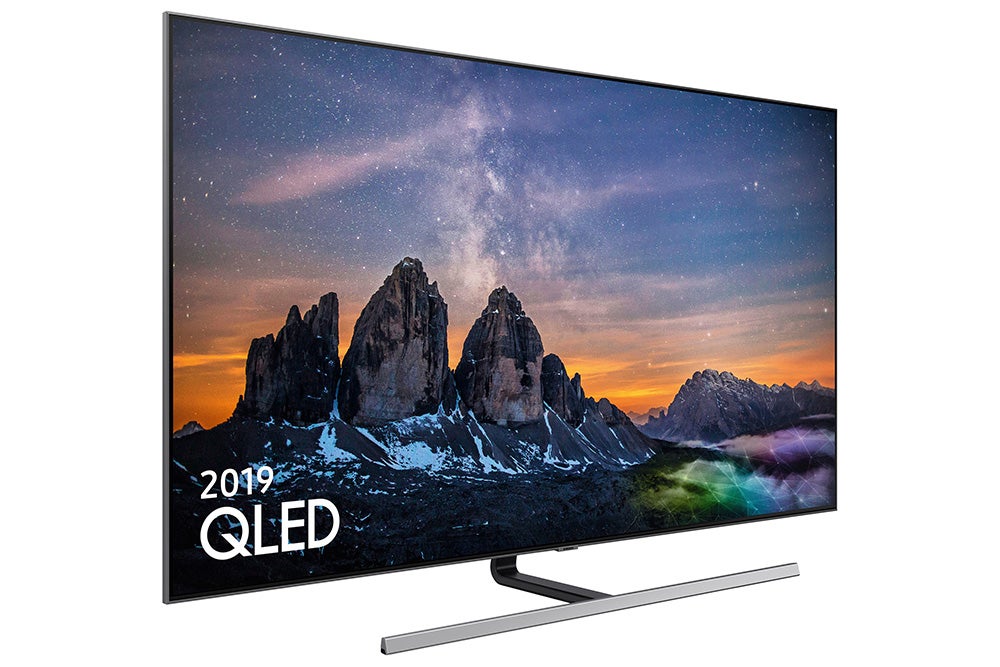 It’s safe to say the Q80R is much happier with native 3840 x 2160 content than when it has to upscale to fit its panel – but, even then, 1920 x 1080 content is eminently watchable. The BBC’s Match of the Day is a stern test, what with all that multi-tempo movement and swathes of unbroken colour, but the Samsung does a manful job.

There’s the inevitable drop-off in vibrancy, detail and contrast, plus a little smattering of picture noise in the extremes, but the images are never less than watchable and compare favourably with those of some nominal rivals.

The Q80R shares the picture processing firepower of its Q90R sibling, and that reveals itself not only in the compelling watchability of its images but also in its extremely rapid 20ms response timer. Gamers know that’s an impressive figure and, allied to its relatively high contrast levels, makes the Q80R well worth considering as a games monitor.

No matter the source material, the Q80R does reasonably strong work with sound; for once that relatively hefty chassis works to the Samsung’s advantage. It’s a bolder, burlier and more assertive listen than its waif-like OLED rivals (except Philips’ B&W-fettled OLED+ 903) – but that big gap between stand and TV is there for a reason. Don’t spend nigh-on £2k on a lovely new Samsung Q80R without budgeting for a half-decent soundbar, too.

With its admirable loyalty to QLED technology, Samsung is fighting a battle against the massed forces of OLED in splendid isolation. All of the Q80R’s worthwhile rivals are OLED TVs – and it’s a measure of the way the mid- to high-end TV market is perceived that this site’s review of the Samsung QE65Q90R praised it as “the most OLED-like LCD TV ever made”.

This TV’s £2k is a not-inconsiderable sum to pay for a 55in 4K model, and there’s no doubt the alternatives are compelling. The aforementioned Philips OLED+903 is available for very similar money, has no need for an additional audio system, features Philips’ remarkable Ambilight technology, and is capable of delivering humbling image quality.

LG, too, to whom every OLED manufacturer owes both a debt of gratitude and of money, has recently served up its OLED55C9 for £2499. It isn’t capable of images as bright as the Samsung, and its lack of HDR10+ support is a bit wilful, but it’s a hugely capable TV nevertheless.

In fact, it’s a measure of just how impressive the QE55Q80R is that it must count as a compulsory audition alongside the Philips and the LG when you’re sizing up your next TV.

QLED is more than just a bloody-minded alternative to OLED; it’s a very viable technology.