The Q85R boasts all the strengths of Samsung's top-tier 2019 QLED range with a bright screen, great HDR and excellent contrast. Blemishes are few and far between, but the lack of Dolby Vision remains a sticking point, and the sound quality would benefit from being beefed up by an external audio system.

The Samsung QE55Q85R is the 55in model in the Q85R QLED range. Sharing a number of features with the Q90R, the Q85R is now available at a more affordable price.

Samsung’s QE55Q85R shares many of the bells and whistles found on the Q90R, but there are a few differences under the hood.

When we reviewed the 65in Q85R earlier in 2019, we found it effective for features and performance, but a touch expensive.

With that in mind, this 55in set could arguably be viewed as something of a bargain. 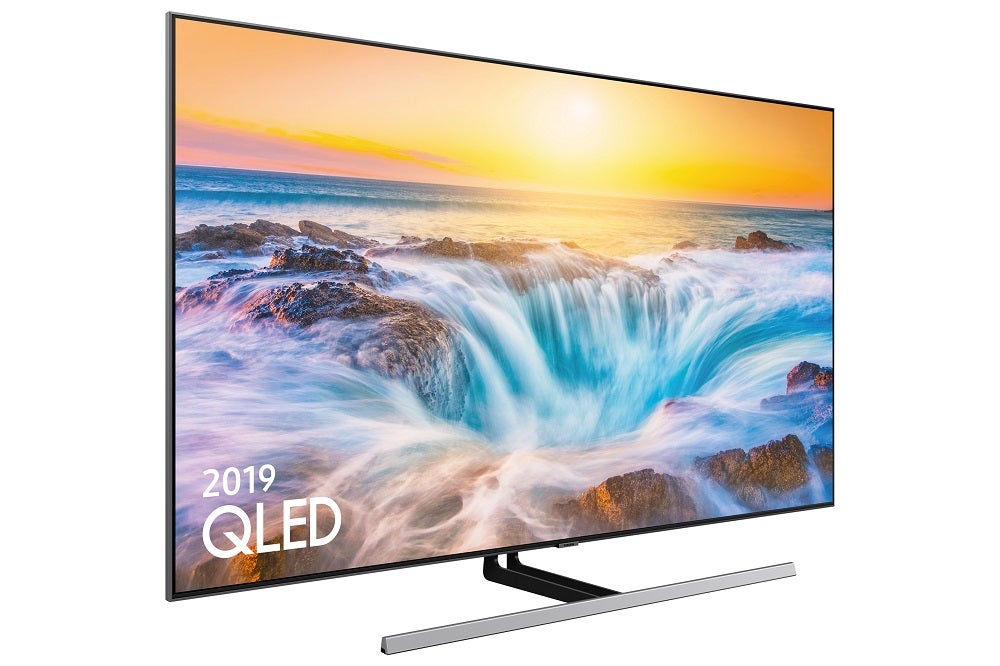 I’ve mentioned this before, but it’s worth reiterating: the Samsung QLED range of TVs are robustly built.

While they aren’t as good-looking as LG’s OLEDs, the QE55Q85R is a pleasing, simple, no-frills affair. Viewed from the front it has a slim profile with a thin bezel. Looked at from the rear it curves outwards, adding slight bulk to the rear end.

The Q85R ships with a central T-stand base that makes the screen look like it’s “floating”, while making it more accommodating for AV racks. The stand is tall enough that it offers enough clearance for a soundbar to be placed beneath it. 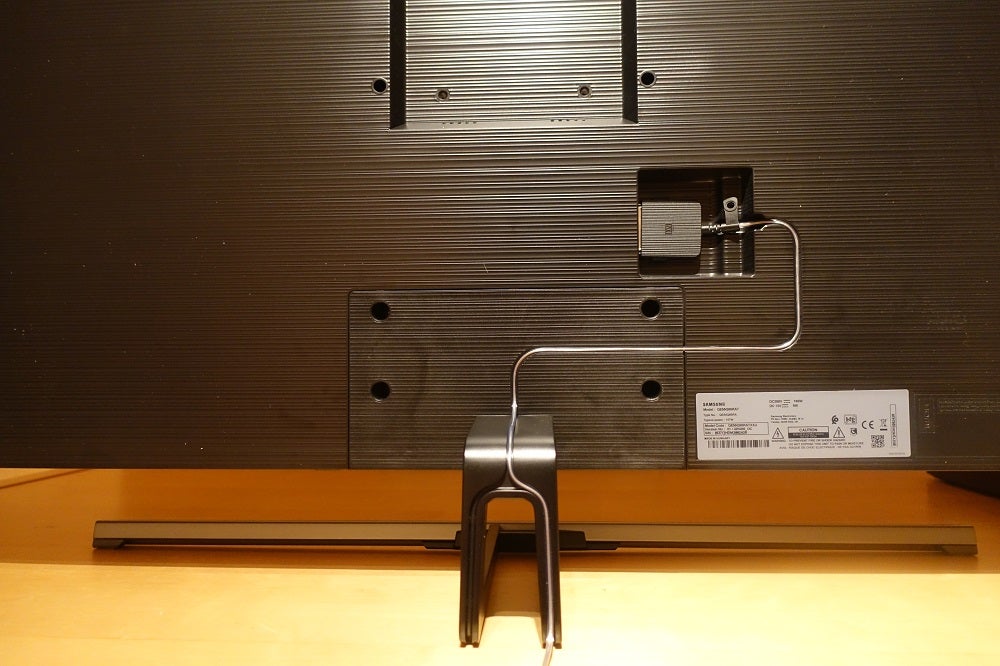 It doesn’t necessarily get rid of the clutter, and the One Connect box is a hefty unit, but it’s a tidier solution than trailing cables from the TV itself. It also makes wall-mounting more conducive with just the one cable flowing down from the TV.

Speaking of wall mounting, the QE55Q85R supports No Gap mounting so it sits flush against the wall. And it’s available in previously reviewed 65in version (£1999), as well as 75in (£2999) for bigger sizes.

While not as highly specced as the Q90R, the QE55Q85R boasts top-of-the-range features.

The Direct Full Array panel isn’t as potent, with 100 dimming zones compared to the Q90R’s 480. Most, if not all, will be satisfied with the contrast and black performance the Q85R offers.

Peak brightness (nits) is around 1500, with average HDR performance closer to 1300 nits. Powering all this is Samsung’s 4K Quantum Processor that covers picture quality, upscaling, audio and the Eden smart interface for a smooth performance. 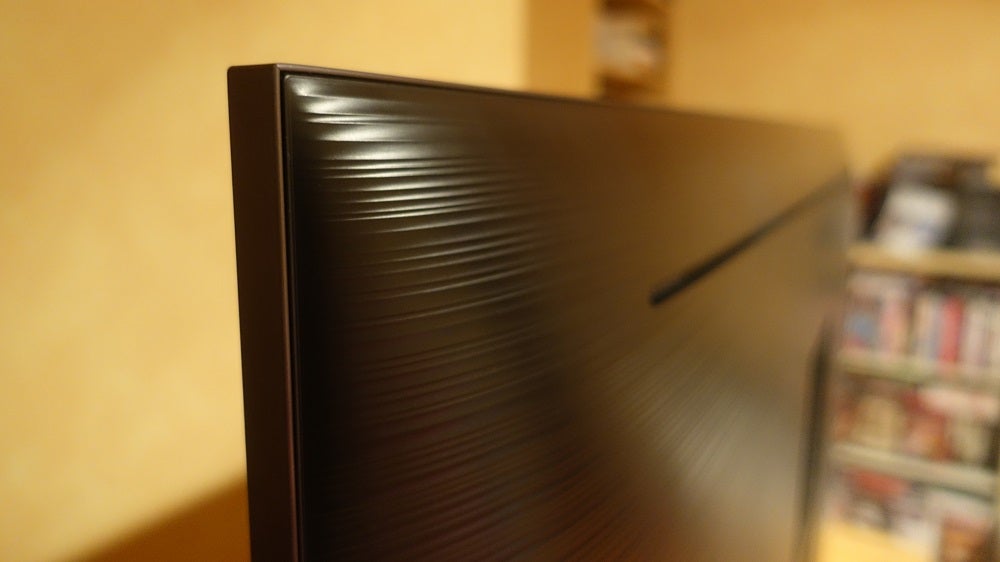 Anyone who’s read a review of a Samsung QLED TV will know they don’t support Dolby Vision HDR.

Instead, Samsung supports its own HDR10+ solution, which fulfils the same function by optimising HDR values in each scene for a more exacting image. The industry standard HDR10 is supported, as is the broadcast Hybrid Log-Gamma (HLG) variant.

It remains a shame Samsung doesn’t support Dolby Vision HDR, especially as Netflix, Apple TV Plus and Disney Plus support it. This is mitigated by Prime Video’s backing of HDR10+, but unless you’re a Prime Video subscriber it feels incomplete alongside TVs from Panasonic and Philips. 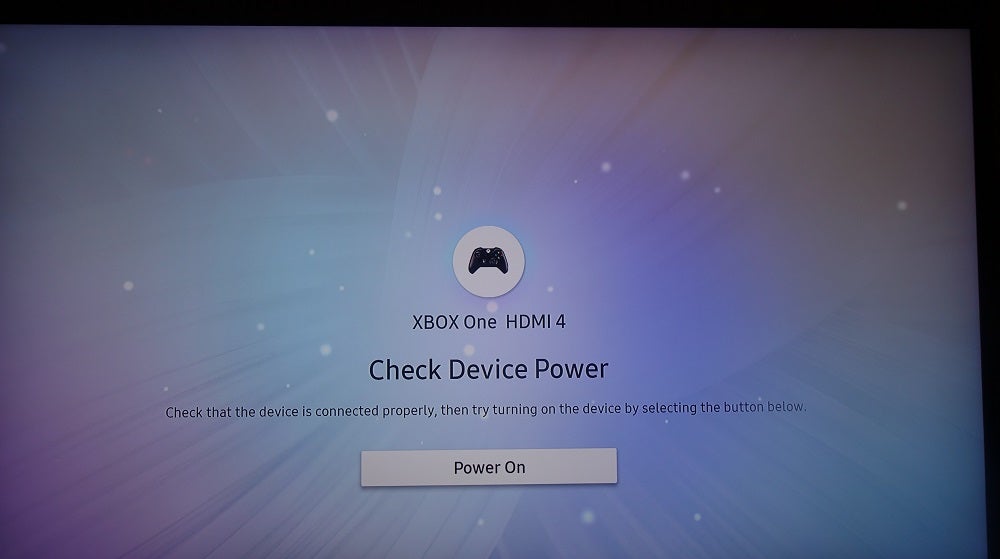 Gamers will be pleased by the presence of the Game Enhancer mode. The TV automatically switches when it recognises a game console, and Xbox One owners can power it on via the TV as well as benefit from HDMI 2.1 features such as Variable Refresh Rate (VRR) and Auto Low Latency Mode (ALLM).

Performance is zippy enough, with smooth inputs that’s most noticeable with driving games. Latency averaged at 28ms after multiple tests, which is quick, but the 65-inch version measured around 15ms.

The QE55Q85R’s Ultra Wide Angle Viewing technology aids colour saturation and contrast at acute angles. There’s no noticeable loss in colour or contrast for a performance that is close to, if not in the same postcode, as viewing angles on an OLED. 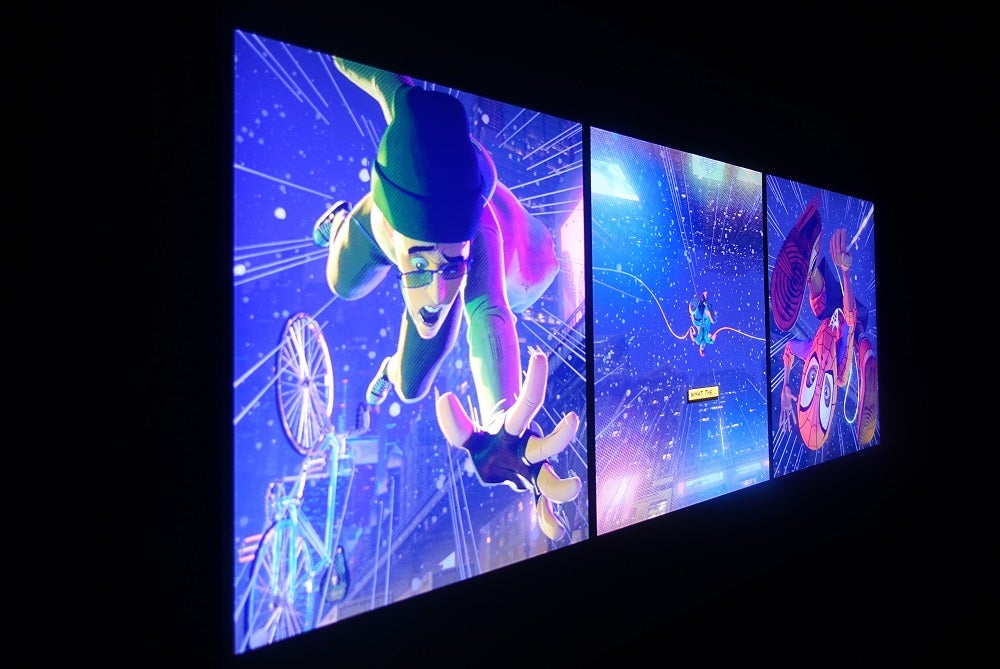 Samsung’s Eden interface is one of the most comprehensively featured for apps. Apple TV Plus is currently exclusive, as is BT Sport, and they sit alongside the usual fare in Netflix, Prime Video, Rakuten TV and BBC iPlayer.

One aspect I’m not a fan of is the requirement of a Samsung account to download other apps after the initial setup, such as Now TV. While it’s understandable to want expedient access to the more popular apps, it seems unnecessary to cordon others off.

And while the Eden platform is fluid and easy-to-use, it does occasionally fail to identify your sources. This is resolved by unplugging and plugging back in, but it happens often enough to be an annoyance. 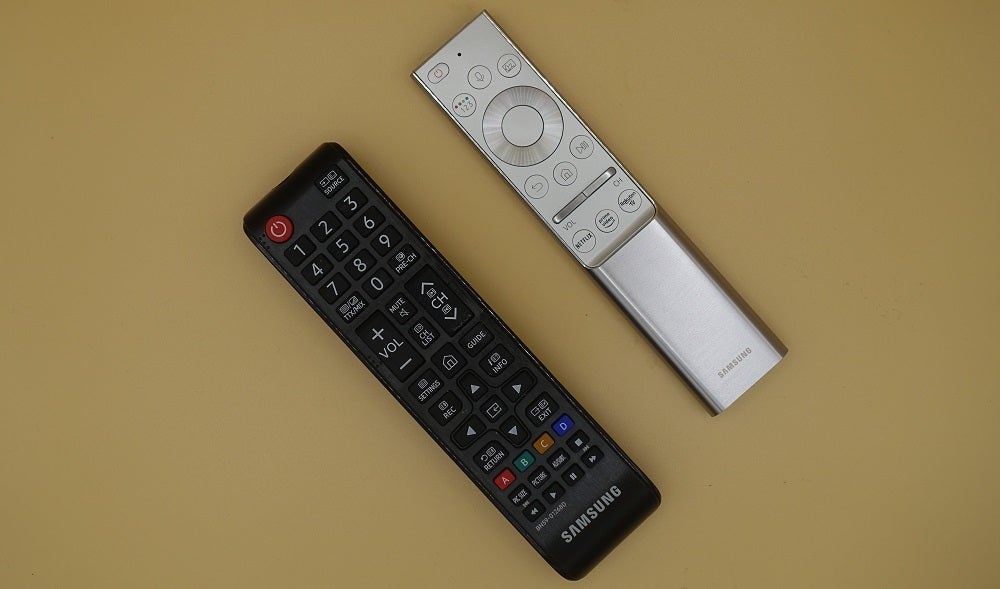 You get two remotes with the Q85R – a standard one and a feather-light, elegantly styled smart version. You get quick-access buttons for Netflix, Prime Video and Rakuten TV and at the top is a microphone for Bixby voice search. Bixby is built-in, but the Q85R “works” with Alexa and Google Assistant speakers, so orders can be barked at the TV via a connected speaker. 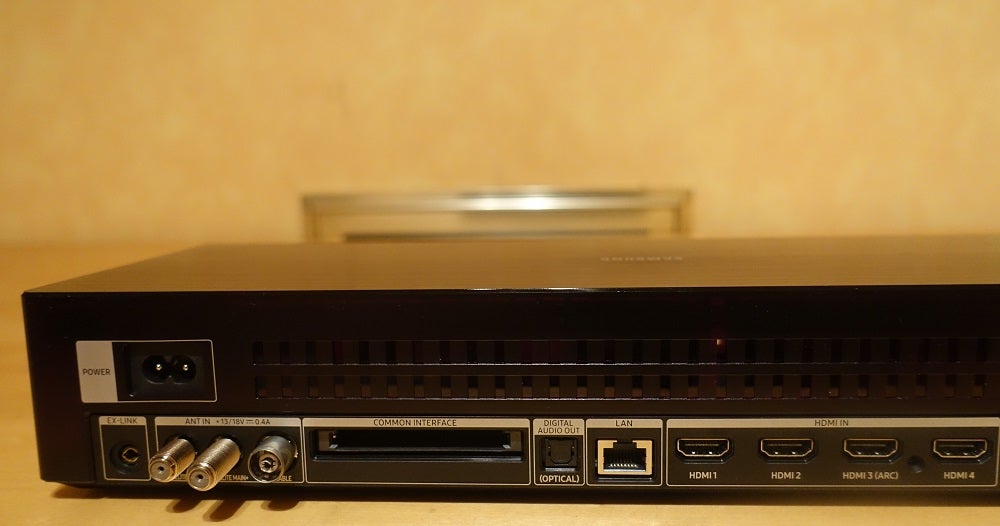 Connections are housed in the aforementioned One Connect box and they number at four HDMI – including ARC for passing audio through HDMI – Ethernet, Digital Audio Out (Optical), a Common Interface connection, three USB 2.0 ports and an EX-Link port, which I haven’t come across before, but apparently is for TV control. Bluetooth is also supported if you want to listen to TV through a pair of headphones.

Before I start it’s worth noting setup and picture modes. Standard mode with the Warm 1 tone was used across all sources, and for 4K content Local Dimming was set to high along with Contrast Enhancer.

For broadcast content, dimming was set to Standard, Contrast Enhancer to low and Auto Motion Plus at custom settings (Judder at 3). 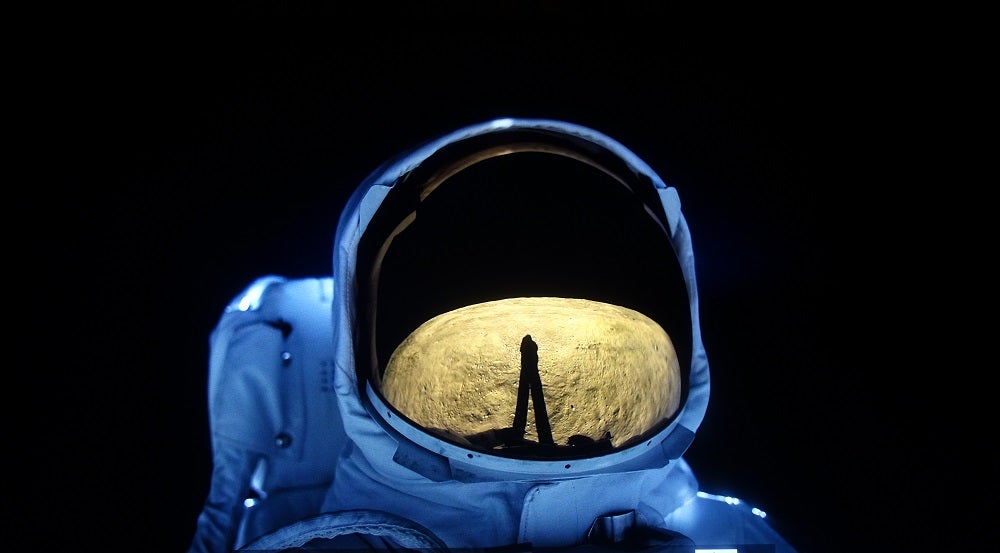 Black performance is very deep, as shown by First Man

Once in full flow the QE55Q85R delivers a clean, refined and bright image. Blacks are inky – arguably, too much – since detail and shadow detail in these areas is lacking. It’s most noticeable where characters wear black on black, with the Q85R not quite having the finesse to pull out the detail. Whites are cleanly reproduced, though, while highlights are strong, retaining a good sense of detail in the brighter parts of a image.

Its brightness makes it an excellent performer for punchy and vibrant native 4K HDR images. A spin of Spider-Man: Into the Spider-Verse via Sony’s UBP-X700 4K player and colours are dazzling in their accuracy and hue. 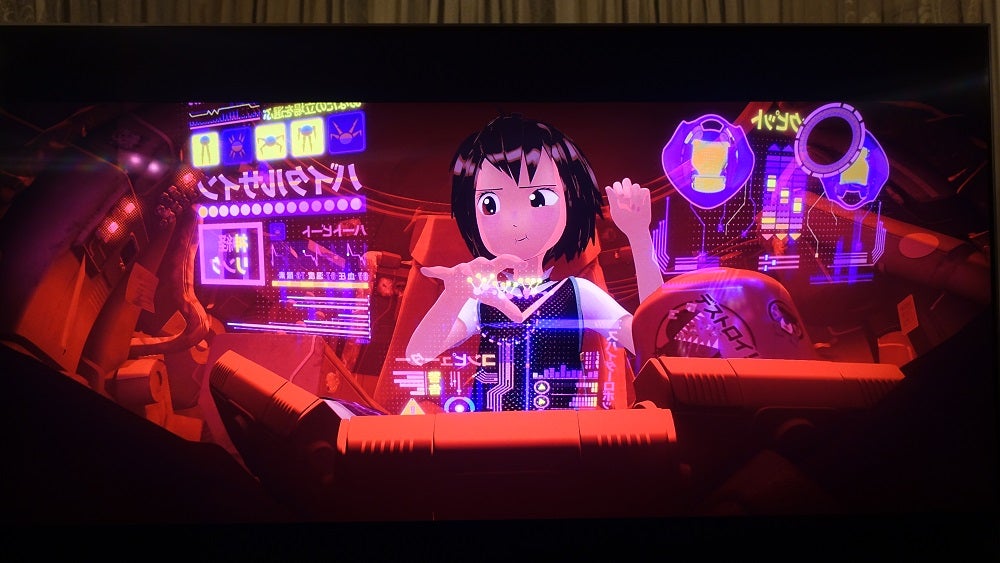 Vibrant, expressive colours are a strength of the Q85R

Compared to OLED colours aren’t as intensely felt, but the inclusion of 100% Colour Volume delivers a diverse and attractive-looking image that pops off the screen.

The Q85R also excels with sharpness and clarity at 4K. Sub-4K content remains impressive, and while HD lacks detail, from a normal viewing position it’s a sharp image with strong clarity that could be forgiven for looking like 4K at times. SD images inevitably struggle with the image less sharp, detailed or clear, but it’s still surprisingly watchable. 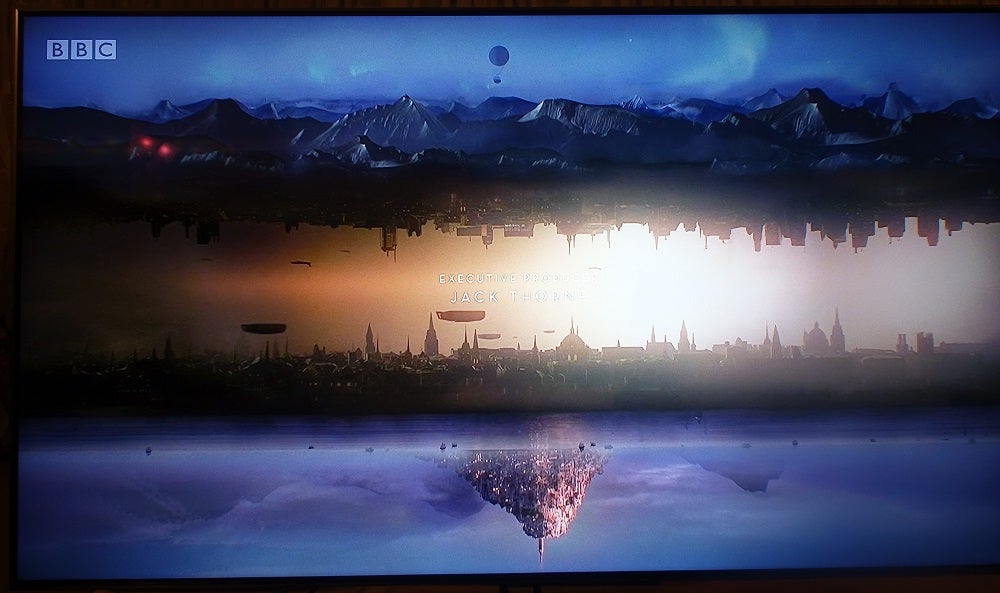 What’s perhaps most impressive is the QE55Q85R’s contrast performance. The delineation between light and dark areas is deftly done. Watching For All Mankind on Apple TV Plus, and the contrast in the scene where Joel Kinnaman’s Ed Baldwin addresses a group of astronauts in a partially lit room is mightily impressive, greatly contributing to the scene’s atmosphere.

Turning to fine detail and Paul Thomas Anderson’s Phantom Thread, and the Q85R scores well, seeking out high levels of detail and texture not just in the clothing, but in the actor’s faces and production design. It’s a measured performance, wringing every last bit of the picture without overdoing it. 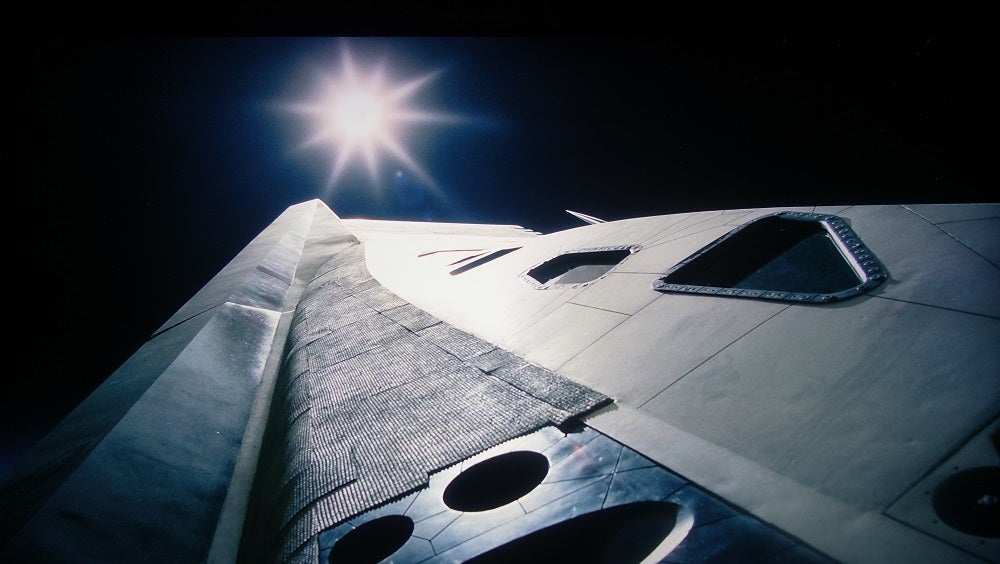 Sound quality is respectable, with the QE55Q85R putting in a performance that produces good clarity with dialogue. You can choose between Standard and Amplify modes, with the latter boosting dialogue levels without requiring a nudge on the remote.

While the TV supports Dolby Atmos via ARC and through Dolby Digital Plus services, we haven’t been able to extract it from OTT apps such as Netflix and Apple TV Plus. Lossless Atmos is coming via an e-ARC update in November.

With that in mind, a soundbar/subwoofer is needed and Samsung offers soundbars that go in tandem with its QLED TV range. The Q85R is fine for watching most TV other than sports, which needs a bit more scale. More beef is definitely required for films.

Should I buy the Samsung QE55Q85R?

Several months ago the Q85R was the odd duck between the Q90R and Q80R. It isn’t as extravagant in terms of specs as the flagship Q90R and it isn’t significantly different from the Q80R aside from more dimming zones.

Other TVs are available in the Philips 55OLED804, which at £1499 (in some stores) offers vibrant Dolby Vision and HDR10+ playback and the fantastic Ambilight projection technology.

Another is the LG OLED55C9. It doesn’t support HDR10+, but looks superb, is capable of great HDR images and excellent sound quality for £1499. Whichever you go for, you’re spoilt for choice.