Aside from the One Connect box, the Q90T has everything the Q95T does. Picture is excellent, features are extensive and the price is more affordable for what is effectively Samsung's flagship 4K TV

Q: When is a flagship TV not a flagship TV? A: When you have to plug all its connections into the back of it.

The Q90T isn’t Samsung’s flagship range of 4K HDR QLED TVs – it sits below the Q95T. What this means for those of us who have even a passing interest in value for money is that we can get all of the Q95T’s clever technologies, functionality and performance without paying the Q95T’s price.

Which leads us to why would I pay more for a Q95T when the Q90T is virtually identical? Because you don’t want to plug all the connections into the back of your TV…

Samsung wants you to choose its QLED technology over the OLED alternative when selecting your new TV. But it’s safe to say ‘design’ is never going to be what tips the balance in QLED’s favour.

QLED can’t compete with OLED’s attention-grabbing slimness. As a refinement of LCD technology, QLED relies on a bank of LEDs to backlight the pixels in its LCD panel, and the result is a screen that’s an unremarkable 35mm deep. Admittedly that’s a lot slimmer than any number of alternative LCD/LED designs, but it’s not OLED-slim, and it’s possible that will be enough to turn some prospective customers off. 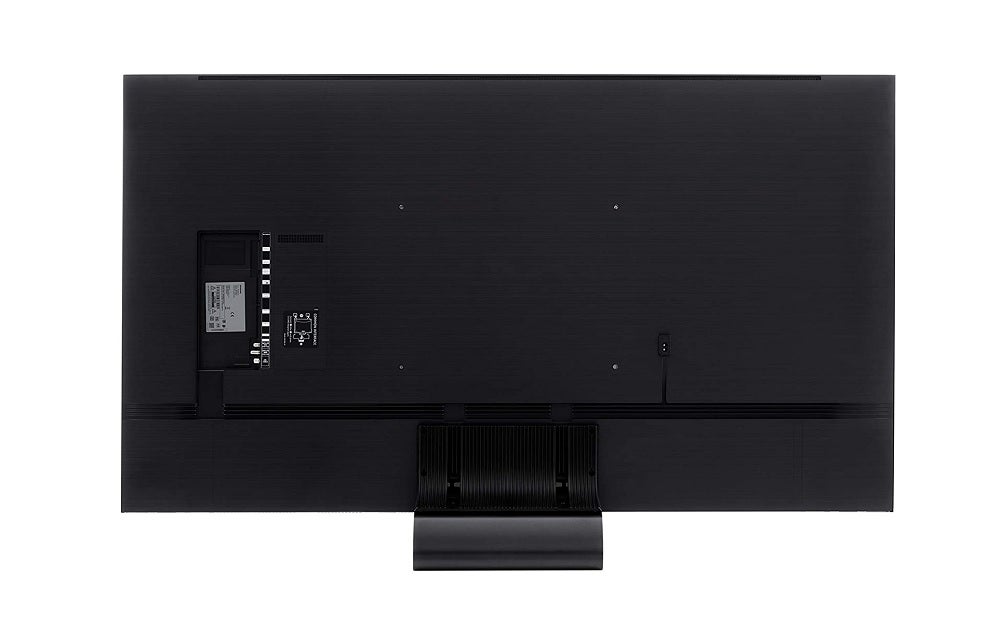 Elsewhere, though, the Samsung Q90T is discreet and actually quite sophisticated in its design. The metal bezel surrounding the screen is brief, tactile and beautifully finished. The central stand supporting the screen is elegantly shaped, sensibly sized and extremely hefty. As much as a television can ever really claim to have a design – when all anyone wants is lots of screen and as little of everything else as possible – the Samsung QE55Q90T ticks all the right boxes.

As is only fitting for a TV that costs a not-inconsiderable sum of money, the Samsung Q90T is extensively packed with features.

It has a 3840 x 2160 resolution, for starters. Those millions of pixels are backlit using a full array local dimming arrangement, which is divided into a little over 100 zones that can be controlled on an individual basis. That’s not a huge number, truth be told, but it should be enough to give the QE55Q90T a chance of offering good bright/dark contrast control and detail levels.

Picture performance is augmented in a number of ways. There’s HDR compatibility with HLG (for broadcast TV), HDR10 and HDR10+ dynamic metadata. This being Samsung there’s no sign of Dolby Vision. ‘Anti-reflective screen’ and ‘ultra-wide angle’ technologies seek to minimise the effects of ambient lighting conditions and your viewing position.

And Samsung has incorporated some of the deeply impressive AI and machine-learning algorithms first seen on its QE75Q950TS 8K behemoth to give the QE55Q90T the best chance of upscaling sub-4K material. 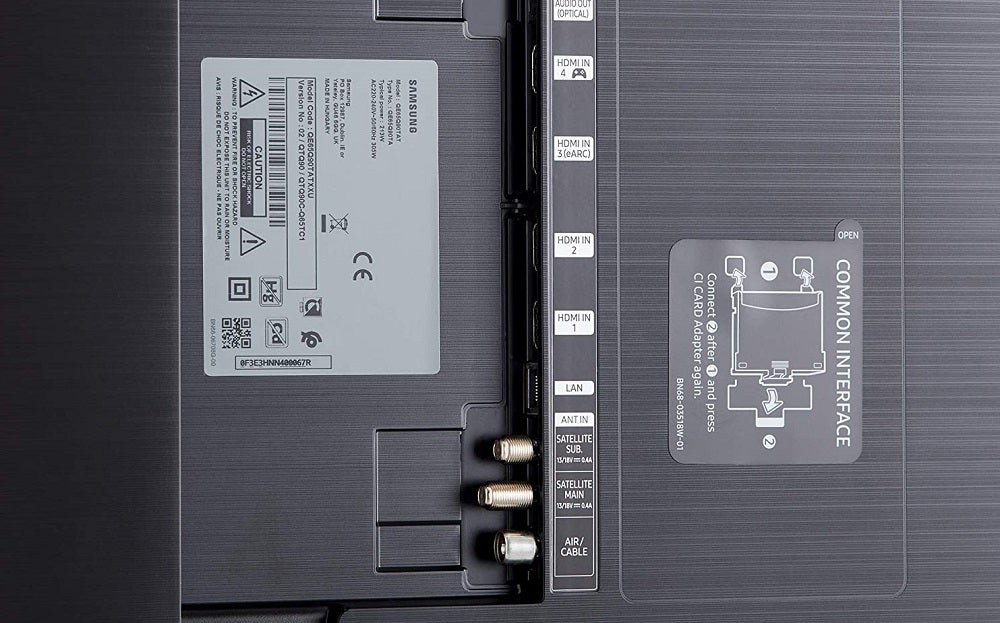 Getting the content on board in the first place can be done in a number of different ways. In terms of wireless connectivity, there’s dual-band Wi-Fi and Bluetooth 4.2, which ought to cover most wireless eventualities. Naturally there are a number of physical connections, arranged on the back of the chassis to back this up.

There are four HDMI inputs, one with eARC compatibility and all four with ‘almost HDMI 2.1’ specification. They’re of  4K@120Hz standard, too, so if you’re itching to get your hands on a PS5 or Xbox Series X console, you can rest assured the Samsung Q90T is ready to make the most of it. There are also two USB 2.0 inputs, a CI card slot, three aerial posts for the integrated terrestrial and satellite TV tuners, an Ethernet socket and a digital optical output.

Connections are what separate the flagship Q95T range from the Q90T. Unlike the Samsung Q90T, the Q95T has just one connection running to it and it’s an extremely slim cable at that. Everything the screen needs – inputs, outputs and mains power – is in an off-board One Connect box. There’s no denying it’s an elegant solution but for a 55-inch screen like this, you’re looking at another 15% on the asking price of the Q90T to get a Q95T with the connections box.

Samsung QE55Q90T interface — Slick, sophisticated and easy to use

Samsung’s Tizen-based operating system and smart TV interface is widely recognised as the best around. Given that it’s demonstrably unbroken, Samsung hasn’t felt the need to fix it. Switching the background colour from white to pale blue makes for an even more relaxing experience, but in every other respect this is the elegant, logical, easily navigated and really quite sophisticated interface we all know and admire. 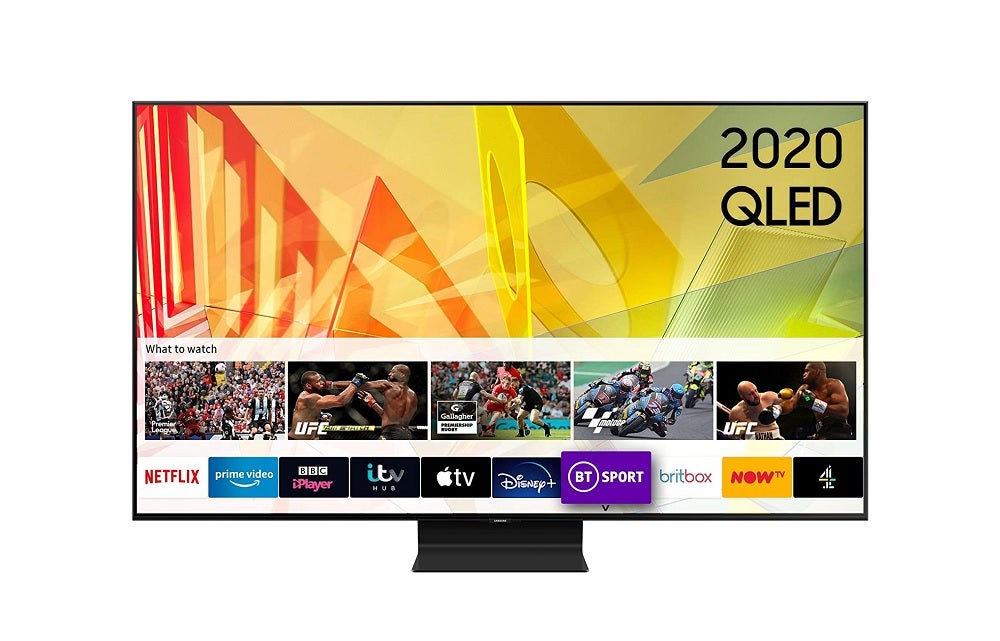 Every worthwhile streaming service (Netflix, Amazon Prime Video, Apple TV, Disney+ etc) is on board, as are all the UK’s catch-up TV services. You’ll never be short of something to watch, in other words.

The smart TV interface and the (fairly extensive) set-up menus can be navigated using one of the two bundled remote control handsets. One is a fairly nasty-looking and -feeling handset with too many buttons (most of them too small) and the other is a more judicious and  expensive-feeling alternative. There’s a degree of voice-control available too, from Bixby, Amazon Alexa and Google Assistant.

Not every product can live up to its on-paper promise. The Samsung Q90T, though, is not every product. This is an outstandingly talented and capable television. Its price might look optimistic at first glance, but you don’t have to be sitting in front of it for long to realise that it’s actually a little bit of a bargain.

Play into its hands with a 4K UHD HDR10+ Blu-ray disc of American Gangster and there isn’t an aspect of picture-making at which the QE55Q90T doesn’t excel. Contrasts are wide, clean and convincing. The Samsung generates very deep, but plentifully detailed, black tones and can keep them potent even when they share the scene with bright, clean (and equally detailed) white tones.

Despite the so-so number of dimming zones, the Q90T’s backlighting control is deeply impressive – even when glaring whites appear on pitch-black backgrounds, there’s no evidence of haloing or smearing. Just crisply described and beautifully defined edges. 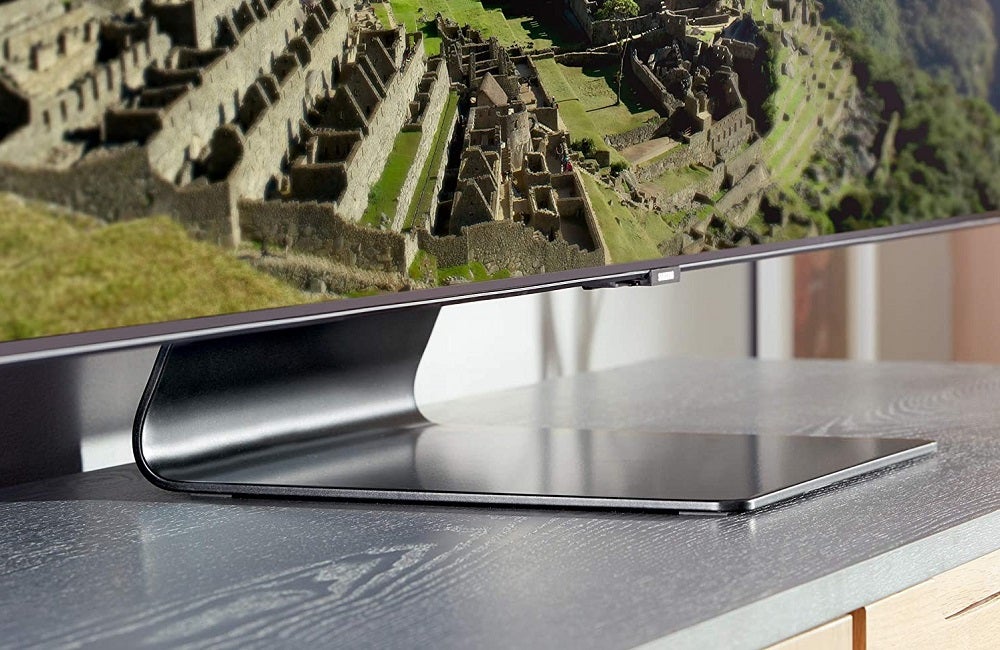 In fact, the QE55Q90T draws clean, believable edges in all circumstances. Similarly, it generates believable colours. Skin-tones are utterly natural, thanks to the epic levels of detail the Samsung is capable of extracting from the source material, and all of this hangs together even if there is movement of the most testing kind happening on the screen.

The Samsung grips motion fanatically, controls contrasts and detail levels unarguably, and basically serves up images that never give the impression of the TV breaking a sweat.

Switching to a Netflix stream of When They See Us is very nearly as satisfying. This is a Dolby Vision-mastered presentation but, of course, but while the colour volume may not be the same as it would on a format-agnostic TV (something from Panasonic or Philips, for example), the QE55Q90T nevertheless serves up great contrasts, great motion control, lavish levels of detail and, yes, great colour fidelity.

Picture noise is basically non-existent, even in scenes of bright uniformity, and the Samsung is nothing short of engrossing. It may seem redundant to talk about a TV in terms of ‘watchability’, but in this case it’s valid. There’s nothing in the way the Q90T performs that doesn’t draw you in. 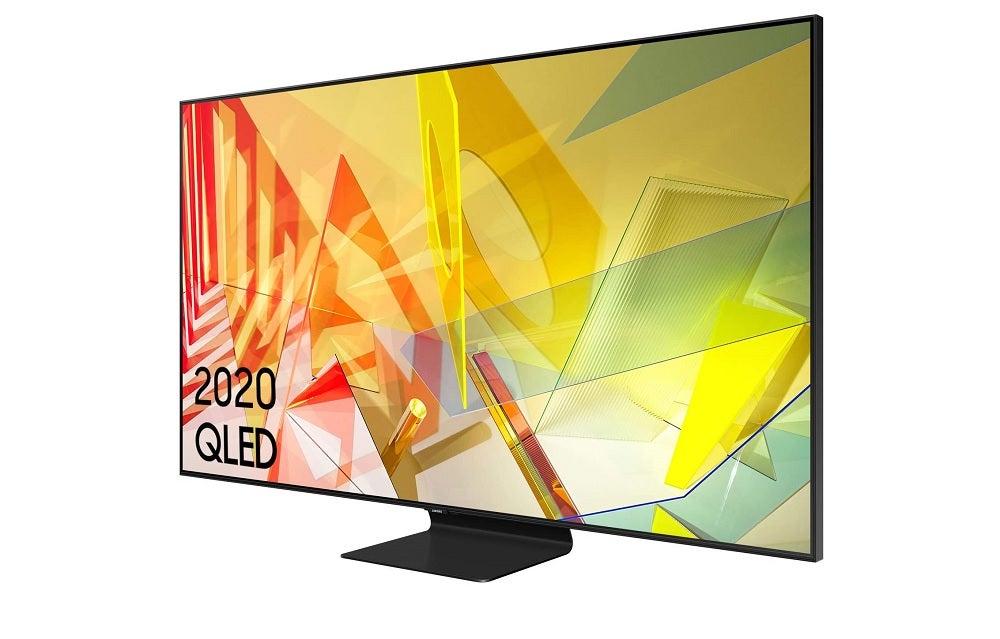 Drop incoming signal down again (a 1080p Blu-ray of Eight Days a Week, a DVD of It’s Not Repetition, It’s Discipline and an off-air broadcast of Would I Lie To You?) and the QE55Q90T remains balanced and poised. Obviously detail levels decrease, edge definition becomes a little less heroic and there’s a definite softening of the overall image with particularly low-resolution content, but picture-noise remains minimal and colours remain convincing. Samsung has demonstrated quite a facility with upscaling in its 2020 TVs, and the Q90T is as good as any of them.

Performance remains excellent even when watching at a less than ideal angle or in sunny or brightly lit rooms. Both the anti-reflective screen’ and ‘ultra-wide angle’ technologies earn their keep, although obviously they’re not miracle-workers. If the sun is shining directly onto the Q90T’s screen, or if you’re sitting at right-angles to it, you won’t enjoy quite the bravura performance you might otherwise be expecting.

After all of this rather breathless praise for the Samsung’s picture quality, it’s almost a relief to report that sound quality is a much more qualified success.

In terms of sound, Samsung has fitted the QE55Q90T with an eight-driver, 60 watt audio system. Speakers are arranged at the bottom, sides and top of the TV chassis in what the company’s calling a ‘4.2.2’ arrangement.

Obviously that’s not to be confused with a Dolby Atmos layout, but Samsung intends this arrangement to offer both more presence than most TVs can deliver and to offer some sonic tracking of the on-screen motion. That’s why it’s rather grandly called ‘Object Tracking Sound’.

There’s certainly a little more power on tap than you’d ordinarily expect, and it’s true that sound does (in a mild way) follow the on-screen action. But you’d never guess it was a 60-watt system, and there’s a degree of flatness to the sound that makes it a lot less luxurious than the images it’s accompanying. Consider a soundbar a compulsory purchase – at least there’s space between the stand and the screen to position it.

You should buy the Samsung QE55Q90T if…

Fundamentally, you want the Samsung Q90T because you want an extremely high-performance TV and you don’t mind paying plenty for it.

The Q90T is furnished with all the latest features to take advantage of the new PS5 and Xboxes.

Tizen has all the apps you could ever want and it’s easy to use.

You shouldn’t buy the Samsung QE55Q90T if…

In this sense, the Q95T is the better option with its slightly slimmer profile and One Connect box.

LG and Philips have OLED TVs at a similar price to the Q90T, and they support Dolby Vision, which Samsung does not.