This mid-range soundbar delivers Dolby Atmos/DTS:X content with panoramic gusto thanks to Acoustic Beam tech, and while the soundstage is understandably front-heavy, its compelling delivery and powerful bass prove ideal for TV, movies, music and games.

The Samsung HW-Q800T is the latest mid-range soundbar from the company, replacing the outgoing HW-Q70R.

Like its predecessor, this new 3.1.2-channel model squeezes three forward-firing drivers and upward-firing Acoustic Beam 2.0 tech into a sleek and slimline chassis.

The Samsung HW-Q800T sports a slightly revised chassis that retains the low form-factor of previous generations, but also reduces the width, making it ideal for TVs with screen sizes ranging from 43- to 65-inches.

The design is slimline and minimalist, with a black finish, a metal wrap-around grille, and a decent level of build quality. The holes for the Acoustic Beam tech have been moved to the top front of the soundbar, thus ensuring they’re not blocked by the TV above.

The LED display is located on the far front right of the soundbar, is large enough to be read from a distance, and lights up when you select inputs, change settings, adjust the volume or choose a sound mode. It certainly makes a nice change from the incomprehensible combination of coloured lights that masquerade as displays on some soundbars.

There are basic controls centrally located on the top rear of the soundbar for multi-function (on/off and source select), volume up/down, and mic on/off; but everything else is done using the included remote control. 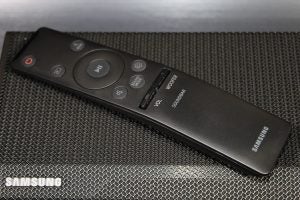 This zapper is ergonomically designed, comfortable to hold and effective to use, with all the controls you’ll need for set-up and operation. The buttons are laid out in a logical fashion, and are easy to reach when using the controller with one hand. There are also control options using the SmartThings app, Amazon Alexa, and even your TV remote via HDMI-CEC.

The wireless active subwoofer is the same design as last year, with a finish and styling that matches the soundbar. It’s a rear-ported model with a side-firing 8″ driver that Samsung claims can get down to 35Hz. Placement is fairly flexible, but for best results try at the front of the room in the left or right hand corner.

The latter is based around 56 holes acting as individual speakers to create a panoramic spread of sound overhead, while the left and right speakers are each composed of a mid-range driver and wide-range tweeter, and the centre channel employs a single wide-range tweeter.

The total amplification is a claimed 330W which is allocated as follows: the front left and right channels each get 60W, the centre channel has 20W, the Acoustic Beam arrays each receive 20W and the sub is powered by a decent 160W. There are no rear speakers, but a virtual setting allows the Dolby and DTS up-mixers to add a surround effect. However if you want actual surround speakers, there’s an optional SWA-9000S wireless speaker pack. 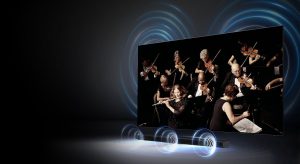 For 2020 Samsung has added a new feature called Q Symphony. This feature integrates the soundbar with compatible Samsung 2020 TVs to make full use of the extra height speakers built into those sets, synchronising the sound from both devices to create a more expansive and immersive front soundstage. It’s a handy feature that allows Samsung owners to get the most out of their TV/soundbar combos, and it’s certainly been impressive in demonstrations.

As with last year, there are four sound modes: Standard, which leaves the audio as encoded; Surround, which adds a greater sense of envelopment to movies and TV dramas; Game Pro, which is designed to immerse you in the gaming environment; and Adaptive Sound, which optimises the sound by adjusting for different types audio using real-time acoustic processing. 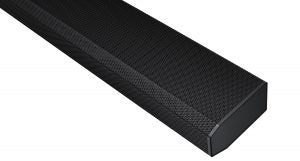 The SmartThings app and Amazon Alexa allow for streaming from a number of services including Apple Music, Amazon Music, Spotify, Deezer, TuneIn and Samsung Music. The SmartThings app also makes setup easier, and allows users to link directly to their Spotify, Deezer or TuneIn accounts. The Q800T supports high-resolution audio up to 24-bit/192kHz, along with the AAC, MP3, WAV, OGG, FLAC, ALAC, and AIFF file formats.

The Q800T doesn’t just work with Amazon Alexa for 2020. It actually has the voice assistant built-in, turning this soundbar into a fully-functioning smart speaker. It’s easy to setup using the Alexa app, and once completed you can ask questions, listen to music or podcasts, and enjoy hands-free voice control. There’s a far-field microphone built into the soundbar itself, but this can be muted for privacy if preferable. 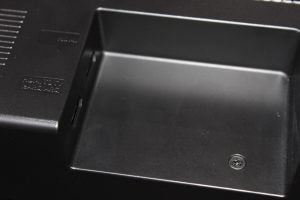 In terms of connections there’s an HDMI output, and a single HDMI input. While it would be nice to see more than one HDMI input on a soundbar at this price, at least the HDMI output supports eARC. As a result you can send lossless audio back from a compatible TV, expanding your connection options, and unlike a lot of soundbars, the HDMI ports pass every version of high dynamic range – HDR10, HLG, HDR10+ and Dolby Vision.

The only other physical connection is an optical digital input, but in terms of wireless connections there’s built-in Bluetooth and Wi-Fi, allowing you to stream music from your home network or via third-party services. A Bluetooth connection is made using the pairing button on the remote, while the Wi-Fi is simply setup using the SmartThings app. Unlike much of the competition, Samsung doesn’t include support for Chromecast or Apple AirPlay.

The Samsung HW-Q800T uses Samsung’s Acoustic Beam 2.0 to create the overhead channels, and while the effectiveness of bouncing sounds off the ceiling largely depends on the ceiling itself, the technology’s 56 angled holes produce a panoramic effect that enhances the feeling of immersion.

The wide-range tweeters in the front-firing speakers also add width to the the overall presentation, creating an expansive soundstage that produces a wall of sound at the front of the room. The well-integrated subwoofer also lays down a solid foundation of bass that supports the entire system with improved weight and dynamism.

Watching the 4K Blu-ray of Midway, the opening attack on Pearl Harbour reveals all the strengths and weaknesses of this soundbar. There’s undeniable scale and scope as the camera follows the Japanese Zeroes down through the US battleships. The machine gun fire strafes across the soundstage, and the flak explodes above you with perceptible verticality. The subwoofer also plays its part, giving explosions an added low-end thump. And yet within this cacophony of destruction the dialogue remains clear and focused. 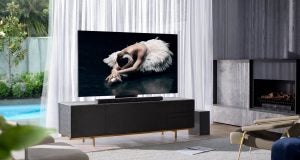 However, what is also apparent is that the soundstage essentially fills the front third of the room, creating a wall of sound. While this is expected of a soundbar without rear speakers, it does result in an acoustical hole behind you. The planes and gunfire essentially disappear as the effects are steered from the front to the rear channels in the sound mix.

You can address this issue by buying the optional rear speakers, and anyone wanting full immersion should probably take this approach. Of course many people don’t want speakers all over their lounge, and if you prefer the simplicity of a soundbar and subwoofer at the front of the room, the Q800T is sure to please with an impressive all-round performance.

Watching the ballistic action of Bad Boys for Life in DTS:X on the 4K Blu-ray reveals the Samsung’s ability to produce an energetic and enjoyable object-based experience; delivering effects with precision and placing them around and above the screen. There’s a warmth to the overall presentation, and a crisp punch to the upbeat tempo of the music on the soundtrack.

The performance remains equally compelling when it comes to streaming Dolby Atmos from Netflix, with the spooky goings on in The Haunting of Hill House scaring up some well-placed bumps in the night. The brutal action flick Extraction also benefits from the Q800T’s detailed performance, with plenty of painfully well-defined punches, kicks and stabs. 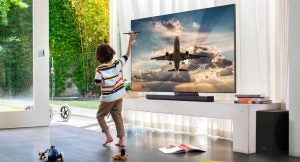 Moving on to broadcast TV and the delivery retains the same sense of composure, whether it’s in terms of the news, game shows, or documentaries. The voiceovers retain clarity, the music sounds natural and uncluttered. While 5.1 soundtracks obviously lose that sense of surround envelopment, panning across the front of the room is good, and the soundbar is able to project effects into the room with ease.

The Q800T certainly has enough amplification to fill even a reasonably large living room, and it can go loud without distorting or sounding strained. The various sound modes each have their advantages, with Standard sounding the smoothest and working best with music. The ability of the Adaptive Sound mode to bring out the fidelity of dialogue works well with general TV viewing, while Surround can give TV dramas and movies a greater sense of envelopment.

Streaming music from Spotify produces a balanced two-channel delivery, with good stereo separation and imaging that results in precise localisation of effects. There’s a pleasing musicality to the delivery, and listening to the La La Land soundtrack reveals the breezy rendition of the jazz-influenced numbers, and a pleasingly precise bass kick to the percussion. Listening to Dolby Atmos music on Tidal also allows the Samsung to display its all-round capabilities with some wonderfully immersive experiences, especially with Riders on the Storm by The Doors.

You should buy the Samsung HW-Q800T if…

The Samsung HW-Q800T is an accomplished all-rounder that produces an expansive and compelling soundstage. The sonic delivery is detailed, dynamic and exciting, creating an immersive wall of sound that enhances whatever you’re watching.

The inclusion or eARC is a major plus point for a ‘full-fat’ Atmos performance, and Q Symphony is a cool feature if you own a compatible Samsung TV.

Built-in Alexa turns the Q800T into a fully-functioning smart assistant. Overall this soundbar is sure to please.

You shouldn’t buy the Samsung HW-Q800T if…

In terms of bang for buck, the Sharp HT-SWB800 uses a 5.1.2-channel system to deliver Atmos/DTS:X, and while it also doesn’t have rear speakers, it is considerably cheaper.