The Nintendo Switch Lite is an excellent portable console that refines the display, buttons and overall form factor of its older sibling. Yet the sacrifice of docked play will be a deal-breaker for some. If you’re yet to purchase a Switch, however, and are purely interested in portable play without the need for local multiplayer, the Nintendo Switch Lite is a no-brainer.

What is the Nintendo Switch Lite?

The Nintendo Switch Lite is a new resigned edition of the standard Nintendo Switch, dedicated entirely to portable play and coming with all the advantages and disadvantages you’d expect from such an ambitious pitch.

The original console was designed as a hybrid machine, capable of acting as a home console while switching to a portable at a moment’s notice. The Switch Lite lacks this versatility, but boasts a design better suited for on-the-go gaming.

Improved battery life and a more comfortable design also sit alongside existing features that have already proved a hit, making this a tempting proposition for both new and existing owners.

This is a handheld console, arguably replacing the 3DS that has seen its first-party releases reach an eventual crescendo in recent months. Now, Nintendo is hoping to move its entire audience onto Switch by offering a wide range of choices. From our testing, it’s definitely on the right track. 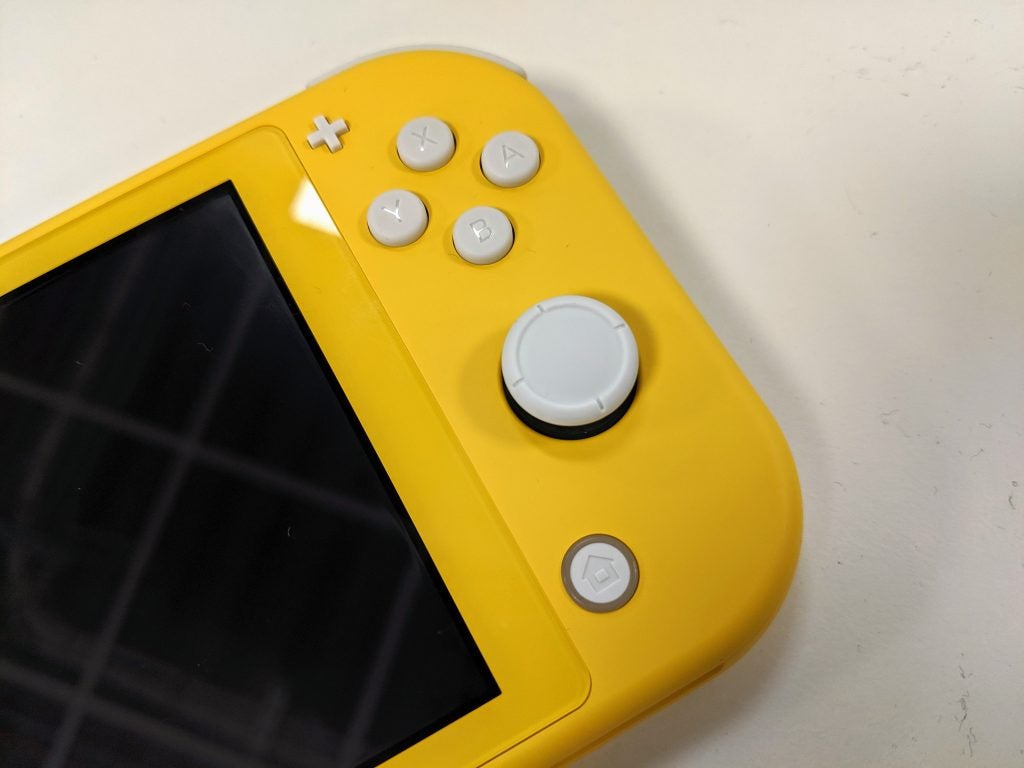 Button layout across the board remains identical, although they do feel a bit different

You can purchase the Nintendo Switch Lite in three colour: Grey, Turquoise and Yellow. We received and are reviewing the latter of the trio, boasting the sharp yellow tones of Pikachu or, heaven forbid, a Minion. It’s a bright and attractive device, fitting perfectly into the palm of an adult hand – although balancing the £200 console was a tiny bit precarious.

Having a decent choice with regards to aesthetics is a nice touch, and this will only get better in the future, with the Pokémon Sword and Shield console looking especially snazzy. The colours on offer  won’t be for everyone, but certainly reflect the happy-go-lucky idea of whipping your Switch out on the commute to hoover up ghoulies in Luigi’s Mansion 3. It’s undeniably eye-catching, a far cry from the blacks and greys that have dominated the console market for so long.

The overall blueprint of the console has been reduced dramatically, now measuring in at 91.1 x 208 x 13.9mm and weighing just 275g compared to the original’s 102mm x 239mm x 13.9mm and 297g. It makes its older sibling look gigantic in comparison, which is something I never expected.

The screen is smaller here, now just 5.5in compared to the original’s 6.2in. Nevertheless, it still possesses the same maximum resolution of 720p.  You aren’t losing anything in terms of picture quality, and a larger pixel density of 267 per inch arguable improves the visual quality.

Due to the lack of docking, there’s no way to upscale anything to 1080p, but the smaller screen real estate makes it difficult to notice any major differences throughout testing. Intensive experiences such as Wolfenstein: Youngblood and Xenoblade Chronicles 2 look better on the smaller screen when things aren’t blown up to fit a 50in plus display too.

Even though the screen is smaller, the lack of an aggressive bezel helps it shine, resulting in the Switch Lite boasting a more distinguished premium feel that won’t fall apart in your hands. I definitely wouldn’t risk dropping it on the floor, though.

The Joy-Con controllers are now built into the console itself, meaning there’s no way to detach them for use in spontaneous multi-player sessions. This also eliminates major features such as the IR sensors and dedicated motion controls in titles such as 1-2 Switch and Just Dance – although, if we’re brutally honest, this is a compromise worth living with for the attractive form factor and luscious design.

This doesn’t discount some of the other qualms that surface with the design. When playing experiences with lots of text, such as Fire Emblem: Three Houses, it can be hard to read smaller portions of text in menus and during dialogue scenes. As such, it’s often necessary to hold the screen closer to your face. It isn’t a deal-breaker, and only surfaces in a handful of games, but certainly worth noting. 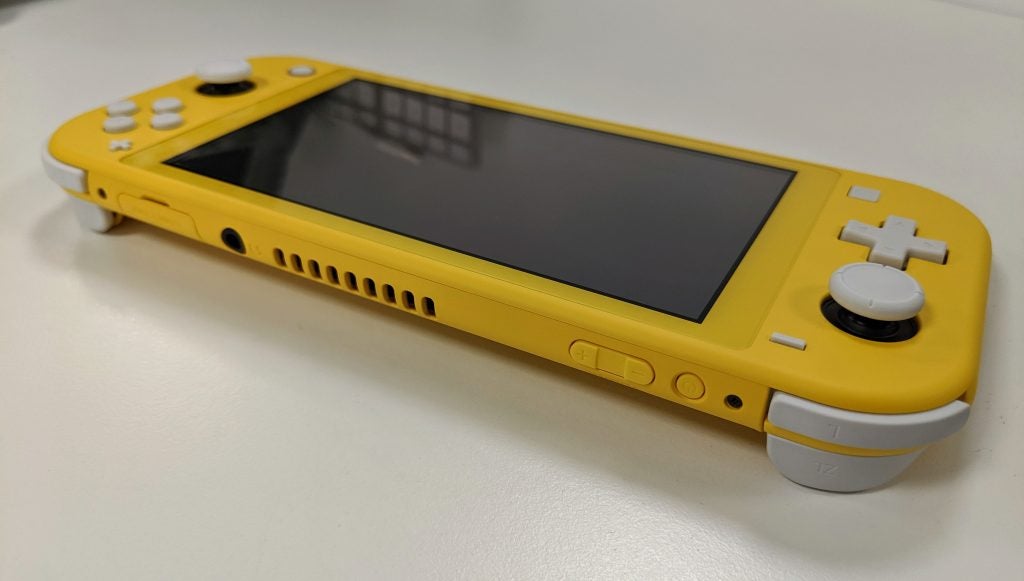 You’ll find no kickstand or detachable controllers on the Switch Lite, which is both a blessing and a curse

Distractions from the small device also emerge with the button layout, particularly with the thumbsticks. It’s likely the size of my hands, but it can be uncomfortable to control a game’s camera using the right stick without developing cramp in my thumb. I soon became used to it, but it seldom felt natural; it lacks the comfort of the original console, or even a Pro Controller when docked.

Thankfully, all of the buttons – whether D-pad or face buttons – feel soft to the touch and beautifully responsive in action, although you’ll quickly notice they lack the clickiness of the vanilla console. You could always connect additional controllers or other peripherals, but the lack of kickstand means there isn’t a way to prop up the console to play alongside friends.

This nullifies a small yet valuable portion of the console’s library. With the exception of wireless connectivity, the Switch Lite feels far more geared towards solo play. I don’t necessarily think this is a bad thing, but sine its inception, the Switch has been marketed as something that brings people together, so it feels strange to abandon so many features that emphasis that quality.

Battery life for the Nintendo Switch Lite can range between three to seven hours, depending on the application being used and the brightness intensity of the screen. There’s myriad factors to consider when testing a console such as this, so we put the Lite through its paces by continuous sessions of Super Smash Bros Ultimate and The Legend of Zelda: Breath of the Wild. On the former, the latter tapped out just shy of the four-hour mark during an eight-player battle.

Less intensive titles such as Undertale and Untitled Goose Game fare better, squeezing far more time out of the battery. You’ll notice increased fan noise and a high temperature towards the top of the unit while playing more graphically intensive games, but it’s seldom distracting enough to be an issue. 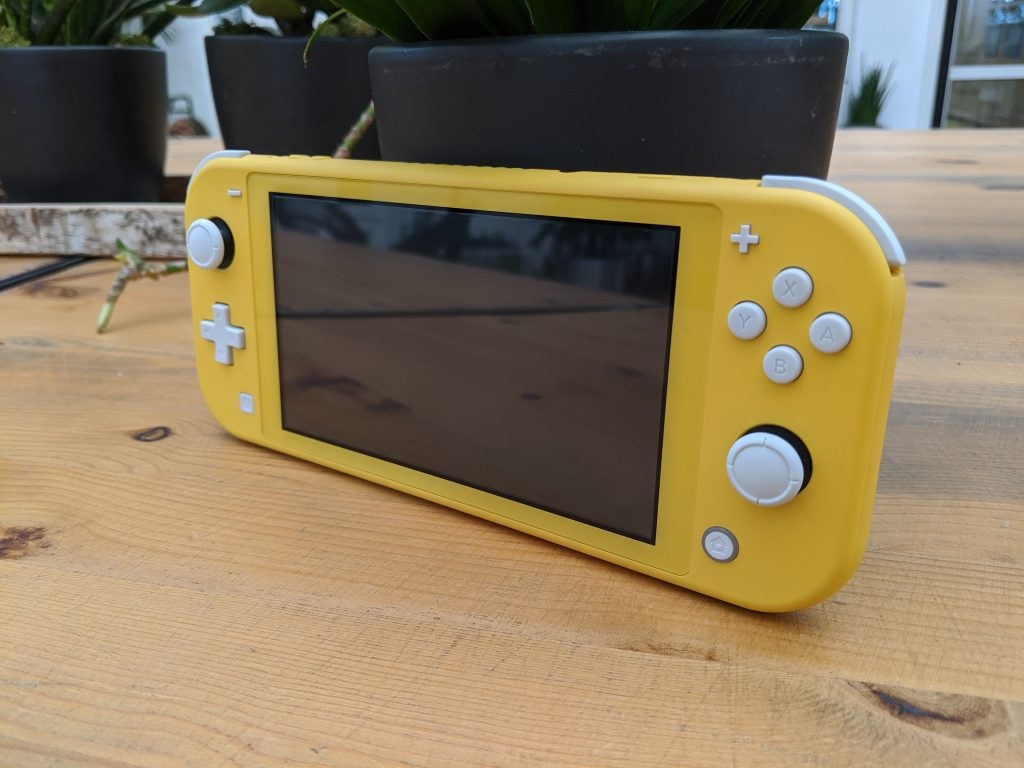 Nintendo Switch Lite Games – Do they all work correctly?

The Nintendo Switch Lite is anomalous in some regards, largely because it makes a small selection of existing games defunct due to the lack of detachable controllers. Titles such as Super Mario Party, Nintendo Labo and 1-2 Switch simply aren’t supported in handheld mode, requiring individual Joy-Cons to function.

In some cases this could be remedied by buying and connecting individual controllers, but the lack of a kickstand makes this a very inconvenient solution. Beyond this, the majority of games I tested using the Switch Lite worked perfectly, with visuals, control methods and performance living up to the original console’s standard – or even beyond in some cases.

You should buy the Nintendo Switch Lite if…

Portable play means the most to you: This is a console which is only playable as a handheld, meaning it will appeal to younger players or those who simply don’t intend to hook it up to their television. Alternatively, it can be a secondary switch for an existing owner. It’s applicable to many situations, which is exactly what makes it so compelling.

You want a stylish, more comfortable Switch: The original Switch feels bulky alongside the Lite, which can almost fit in the palm of my hand. It feels, looks and runs brilliantly – and can be slid into backpack much like a tablet or laptop with ease.

You want access to a growing library of fantastic games: Since its initial release in 2017, the Switch has become home to a fantastic selection of games. Breath of the Wild, Super Mario Galaxy and Xenoblade Chronicles 2 are all classics, and this library will only grow stronger in the years and months to come.

You should not buy the Nintendo Switch Lite if…

You’re into docking: Playing on a television or larger display isn’t possible with the Nintendo Switch Lite. This is a strictly portable console, meaning the box contains a charger, the machine and little else. Those who wish to have the hybrid experience should invest in the base model.

Detachable joy-con matter to you: One of the biggest charms of Nintendo Switch are taken away with the Lite model. You can no longer detach its controllers for a spot of local multiplayer. This alongside the lack of kickstand makes the Lite a far more solitary experience, which won’t be for everyone.

You have large hands: The Switch Lite feels like it would work best with younger gamers and those with smaller hands, since I have trouble using it for prolonged periods of times without suffering from bouts of hand cramp. However, as a secondary console to my docked Switch it is more than ideal.