Do you have zero friends? Is physical interaction with other human beings a rarity? Then 1-2-Switch is not for you. Nintendo’s party game collection, like Nintendoland and Wii Sports before it, is best enjoyed with friends, drinks and pizza, ideally in copious amounts.

Also like its predecessors, 1-2-Switch serves as a showcase for the Nintendo Switch and its myriad functions. Most of these are tied up in the Joy-Con, the deceptively advanced and rather marvellous controllers that form the left and right sides of the Switch when you take it out in portable mode.

Unlike those previous showcase games, 1-2-Switch isn’t included with the console, and despite Nintendo’s protests to the contrary, it really should’ve been. Nothing else on the launch slate does anywhere near as good a job of profiling the Switch’s capabilities, or training new owners in everything that the hardware can do.

It’s perhaps because of the need to introduce players to what the Switch can do that there’s a strange sense of having your hand held when you first boot up the game. With no explanation of what it’s doing, 1-2-Switch will force you to play through five of only a small handful of games on offer. There’s no option to skip; no options at all – just play a few games, complete with the bizarre live-action intros of improbably peppy actors demonstrating what to do – and then it’ll deign to unlock the entire collection. Points lost for UI, there.

Once unlocked, the 28 mini-games included in 1-2-Switch give players a snapshot of everything from basic motion sensing, as with Samurai Training’s wild swinging of imaginary katana, to the remarkably precise HD rumble of the Joy-Con’s vibration in Ball Counting, where you guess how many ball bearings are rolling around inside a “box”. It even highlights near-object sensing, one of the Switch’s less-discussed abilities, in Eating Contest where you guzzle footlong sandwiches by chomping the air in front of a controller. The only other launch title that comes close to showing off the hardware in the same way is Snipperclips, and that’s focused on its own single set of mechanics.

Conversely, some of the titles included here feel a bit too inclined to show off the tech, rather than provide an actual playable experience. The bland Joy-Con Rotation exists to get you to twist the controller around in a circle, the player with the highest total degree of rotation after three turns declared the winner. Yes, it shows off the motion and balance detection very well, but it’s incredibly boring.

Related: Legend of Zelda: Breath of the Wild review 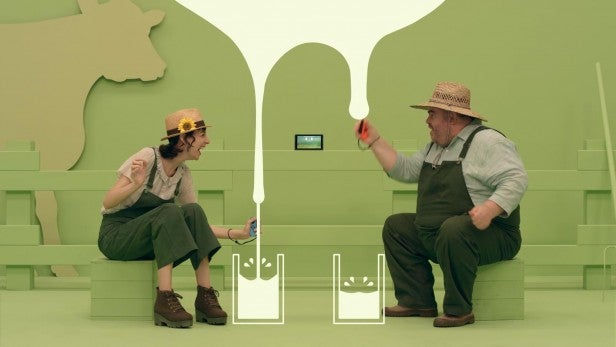 Others are overly complex – something of a death knell for what’s meant to be a pick-up-and-play collection of social games. I’ve had 1-2-Switch for over a week now, and I still don’t think I properly understand Sneaky Dice, a two-player game where you’re meant to psych out your opponent to get the highest score on dice rolls.

The challenge level varies across the board, but perhaps not how you’d expect. The difficulty of each title is represented by a number of chilli peppers on each selection screen, but the real test of your skills will be in how well you perform to the game’s liking. Gorilla, one of the package’s more peculiar additions, where you woo a lady gorilla by beating your chest, is particularly picky – you’re told off if you actually beat your chest, and you have to hold the Joy-Con at a very specific angle. Being admonished by a game really takes the wind out of your sails.

Where the package comes alive though is in its intended party environment. Get some friends together – this is very literally a case of “the more, the merrier” – and it’s genuinely a lot of fun. You’re not even meant to look at the TV for most of the titles, but instead focus on your rivals and figure out when they’re going to strike, or suss out what they’re thinking. When you get into a groove, this is social, real-world gaming at its finest.

You’ll soon pick out favourites to play. Wizard, where you do your best Harry Potter wand-waving impression, cowboy shootout Quick Draw and its tricky cousin Fake Draw, and oddly Baby, where you nurse a bawling infant to sleep, have proven most popular with my crew. Half the fun is how stupid you look and feel doing anything.

The other half – and let’s address the elephant in the room, here – is how much of an innuendo much of 1-2-Switch feels. From the aforementioned Eating Contest, with its questionable positioning of Joy-Con to mouth, to the now-infamous Milk, where you compete to extract the most moo juice while staring into your friends’ increasingly disturbed eyes, this is easily Nintendo’s most euphemistic game ever. They knew what they were doing, and the fact that you know what you’re doing when you’re playing makes it that much more hilarious. 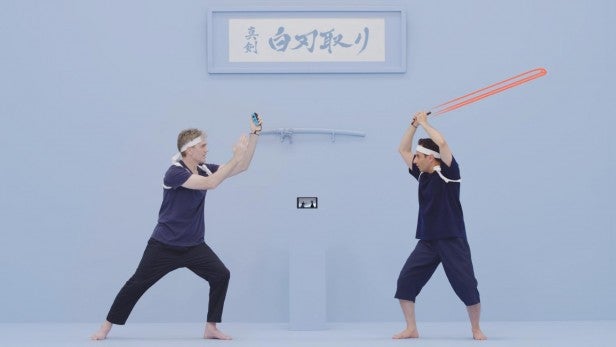 If you’ve got a large group of mates over, Team Battle mode is peak 1-2-Switch. A step beyond Shuffle, which randomly chooses a single game to play, here you’ll split your group into two halves, and the game creates a randomised board game of the minigames. Each team takes it in turns to send a victim up to play, with the winner spinning a dial to determine how many spaces you move along the board. It all gets surprisingly tense and competitive – again, depending on the group you have playing – but there’s a certain magic to the game (or perhaps drinking while playing the game) that gets people weirdly invested.

It’s only in those group situations where you’ll get the best out of 1-2-Switch, though – and how often do you really have a large group over expressly to play video games? Even if you plan a host of Switch parties exclusively centred on this game – and honestly, you should probably plan at least one – the rest of the time it’ll be sitting on the shelf.

1-2-Switch packs in an impressive amount of content, and is legitimately one of the best party games you’ll come across. If it’d been included with the console, it would doubtlessly win over a lot of people. I’m just not sure anything here is compelling enough to entice people to pay an extra £40 for it – especially when Zelda is going to be sat right next to it on shelves.