If there’s a better game out there than Breath of the Wild, I haven’t played it. Nintendo has created, for me, the greatest game of all time. It’s everything I want from a game and one of the most rewarding experiences I’ve ever had.

Available on Nintendo Switch (version tested) and Wii U

My “top five games of all time” list has remained locked for years. The order can fluctuate, but Super Mario 3, Super Mario World, Metal Gear Solid, Ocarina of Time and Dark Souls have stood firm, despite all the other amazing titles there have been in that time.

So when I say Legend of Zelda: Breath of the Wild not only gatecrashes the list, but probably beats the lot as the greatest of them all, I hope you realise how serious an achievement it is. Whatever your feelings on the Nintendo Switch, it’s arguably one of the greatest launch games for any console ever. It’s that good.

Where modern games seem hell bent on telling you exactly how to do every little thing, leading you by the nose with cumbersome tutorials, Breath of the Wild unleashes you on a huge world and dares you to explore. It is, in many respects, a return to the ethos of the original Legend of Zelda. It’s a refreshing change.

I won’t spoil any of it for you, but the plot is interesting enough to hold your attention without intruding on your exploration of Hyrule. Vitally, it’s told through flashbacks, which means you can complete dungeons in any order without it disrupting the flow of the story. It’s a genius move.

It really underlines the total freedom of the game. Right from the beginning, the player is free to approach Breath of the Wild however they choose. Gone is the prolonged prologue that includes the hunt for your first weapon, shield and laying out the now well-established plot. Instead, Link is immediately set loose in the (absolutely enormous) land of Hyrule and is free to explore.

It helps that the landscape is absolutely beautiful. Hyrule is awash with colour, showing off Breath of the Wild’s brilliant visual style. It won’t set any technical benchmarks like Horizon Zero Dawn – at times textures may appear blurry both on the big screen and on the Switch’s 6.2-inch display – but the art is utterly gorgeous. The variety on offer across the land, from the snow-capped mountains up north to the most beautiful realisation yet of Zora’s Domain, or the volcanic reaches of Death Mountain, is jaw dropping. Hyrule is a beautiful place to be.

This is also the largest Hyrule Nintendo has ever created, in both breadth and depth. Having a simply massive open world wouldn’t mean much if there wasn’t so much to do within it, but there’s tons. There are the 100 Shrines – basically mini-puzzles which reward the player with “Spirit Orbs” to earn new hearts or an increased stamina bar – as well as God knows how many Kokiri kids to hunt for their Korok seeds, stables to find and register horses, and towers to climb to unlock more of the map. You can even take photos of everything in sight to complete the Sheikah Slate’s compendium.

There’s nearly endless content to enjoy. And, once again, the game never encourages you to do one thing over another, nor does it tell you how to do anything, which is why this experience is so memorable and rewarding. 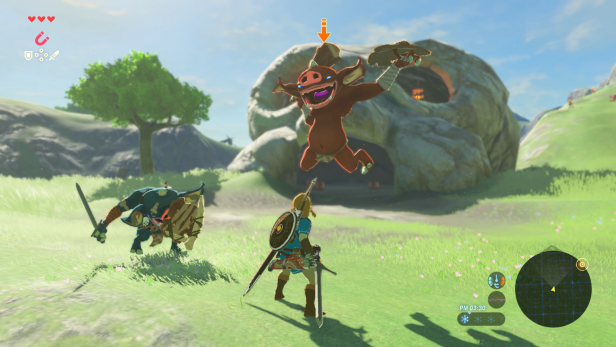 Everything I’ve discovered, I’ve learned simply by playing, either through trial and error or through finding secrets hidden in the nooks and crannies. This inductive learning approach to gaming has always been my favourite. It’s why Mega Man X will remain so incredible to me – even to this day I remember how to do everything in that game because I found it out. Nothing is ever explicitly said in Breath of the Wild, only for it to be quickly forgotten, but instead the game mechanics are a series of wonderful lightbulb moments.

For example, the most iconic weapon possibly in all of gaming, the Master Sword, is hidden deep within part of the world and at no point does the game tell you how to get it. I decided around halfway through the game to go and search for it, having studied the map and having a hunch it was found in a particular area. The nearly two-hour journey of solving puzzles and reading the map to finally see Link standing in front of the plinth housing the Master Sword was one of the most memorable gaming experiences I’ve ever had, simply because I learned how to find it on my own.

This sense of reward is further increased by the surprising challenge offered in Breath of the Wild, which is the toughest of the series to date. Every weapon, bow and shield that Link picks up is perishable, be it through wear and tear or environmental hazards. Learning to forage and scramble is key to survival, and every enemy is likely to give you a very tough time if you’re lacking sufficient meals and backup toys before embarking on the next quest.

The environment can be as frightening and deadly as the enemies, too. After working hard to collect a series of weapons and shields with great stats, I made my way towards the next dungeon. It was about a 15-minute walk, and in that time a lightning storm had formed overhead. What I didn’t know was that, if Link is carrying metal items in a storm, the lightning is attracted to his weapons and can strike our hero down. The only way to save him is by either hiding under shelter until the storm passes, or tossing all of the hard-earned offending objects. It’s fiendish and unforgiving, but never unfair. 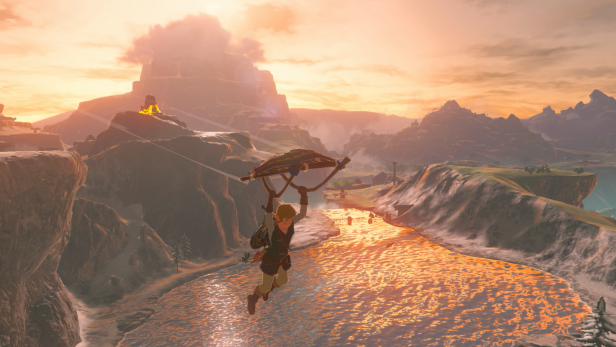 Cooking is also one of the surprising joys in Breath of the Wild. There’s no cookbook to teach you which ingredients blend to the greatest reward, meaning you simply have to throw things together in the pot and hope that what comes out is edible. Different mixtures of ingredients will have different outcomes – some will simply replenish Link’s health or increase his resistance to cold or hot climates, while others will offer extra hearts or even an extra stamina wheel. Learning what combinations work best is the key to taking on tougher enemies – but the only way to learn is through experimentation.

There have been plenty of times when I’ve thrown a Lizalfos tail, Bokobilin heart and some mushrooms into the mix, hoping for the elixir I need to fight the next boss, only for the hilarious noise of pots and pans clanging together as glass shatters to inform me that in fact I’ve cooked something rotten. I probably should’ve guessed from the recipe I used.

The general plot leaves things entirely up to the player in how they choose to tackle Ganon. A century prior to the start of the game, the “Great Calamity” saw Ganon destroy Link and his band of heroes, kidnapping Zelda in the process. In order to protect Link in the hope that one day he’ll return and save her, Zelda sends him to a cave to rest and recover. Link awakens with amnesia, and must then undertake a journey of rediscovery, retracing his steps and working out both who he is and who his heroic friends were, in order to take down Calamity Ganon. 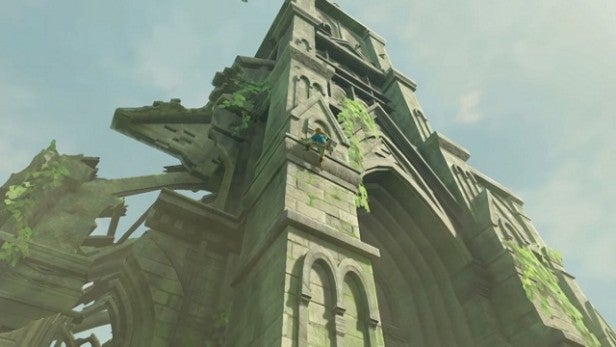 Only a couple of niggles might put you off. One is the somewhat hammy voice acting, though it’s only used in cut scenes so doesn’t impact the game too much. It’s the first time a Zelda game has had voice acting in it, and I think Nintendo’s inexperience with this shows.

The other is an occasional dip in performance. While Zelda mostly runs at a solid 30fps on Switch, when things get heated, or in particular when Link is running through a dense patch of grass, it can take a pretty substantial hit.

But neither of these are enough to stand in the way of what is an amazing experience. I’m consistently staggered by how good this game is. The ingenious design of its Shrines and the “big four” dungeons alone will make your jaw drop. I don’t want to spoil them here, but just know you’re in for an absolute treat. It’s staggering how much content there is outside of the main questline, too, and how seemingly innocuous side quests feel compelling in their own way.

I’ve spent several hours trying to chase down “Restless Crickets” through the grass for someone in Kakariko Village so he can impress a girl, and if you ask me I’ll never be able to explain why.

If there’s a better game out there than Breath of the Wild, I haven’t played it. Nintendo has created, for me, the greatest game of all time. It’s everything I want from a game and one of the most rewarding experiences I’ve ever had.

With the incredible variety of gameplay on offer, it’s understandable why Nintendo cleared the Switch launch schedule for Zelda. There’s a good chance you’ll be absorbed in everything it has to offer all the way up until the release of Mario Kart 8 Deluxe.

For me, there isn’t a better experience to be found on the Switch or anywhere else.