That isn’t to say I’m particularly good at the Mario Party mode, which is ostensibly the title’s main attraction. Mario Party sees you and three friends (or a combination of friends and AI players) stomping around a game board with the aim of collecting the most stars, except that everything is in constant flux.

You can’t play to win Mario Party, because it is often chaos in its purest form. Elements of the gameboard, special power-ups and events, and even the character’s unique dice rolls can help or hinder you at a moment’s notice, and at the end of each game several stars are handed out at random for excellence in certain areas – I was awarded a star at one stage for using the most items, and in another game for having Yoshi as an ‘ally’ – before the smoke clears.

When the smoke has cleared on the 5-10 games of Mario Party I’ve played this week against real players, I’ve been crowned the winner. Sometimes I’ve been deserving, other times I’ve been elevated from last to first place on the back of the AI’s random whims. Once, a sentient stone block — a Thwomp, in Mario parlance — bet on me to win, giving me a golden pipe that could teleport me directly next to a star. This item, and indeed the Thwomp’s confidence, were randomly generated. What I’m saying is, despite your best efforts, you’re not playing to survive here. You’re playing to wind up your friends. 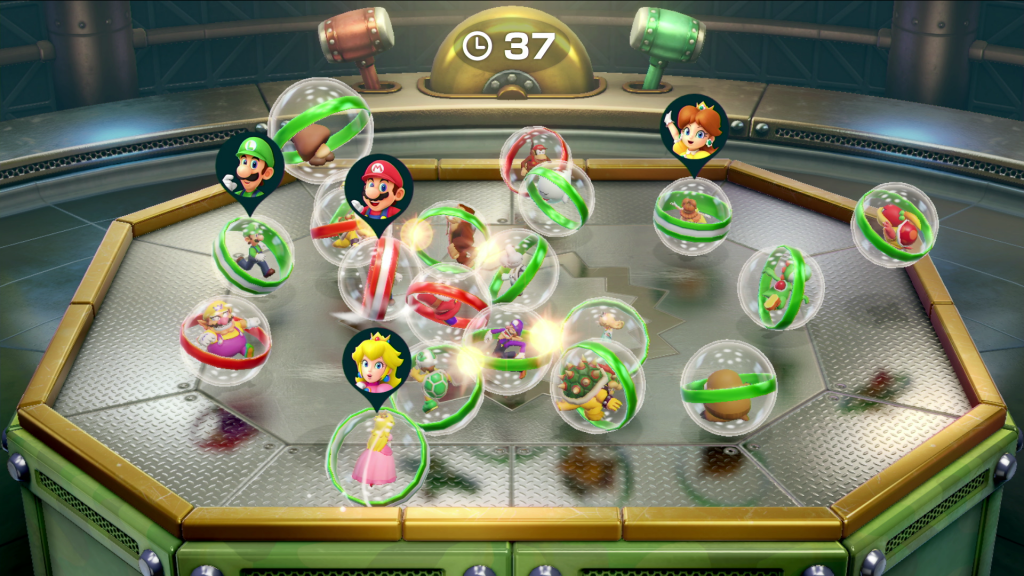 As a result, the game sings when you have four players in the same space clutching a Joy-Con — each playing a solitary Joy-Con, no other controller set-up is supported — and playing their hearts out. The AI can make weird decisions, seemingly trying to set you up for the win in normal mode, while at harder difficulty levels they are near-superhuman.

But Super Mario Party isn’t just a game about the main event anymore. There’s a competitive mode, River Survival, which I adored as it has four players working together to get a boat to the end of a river against a timer. This mode apes classic Outrun, even letting you choose whether to turn left or right at the end of each segment. The challenge comes from getting your four players to row at the right time, in the right direction. With two players on each side, you’ll need to coordinate so as to best avoid hazards and pick your way down the river.

As with the rest of this package, it’s manic. Throw into this a time limit and the need to complete minigames to extend this timer, and you’ve got a great alternative to the competitive mode that is no less ridiculous, and no less enjoyable.

If you’re after a smaller bite, there’s a variety of different minigames available, with the game offering numerous ways to play them in a competitive structure, but also just letting you play the ones you want. 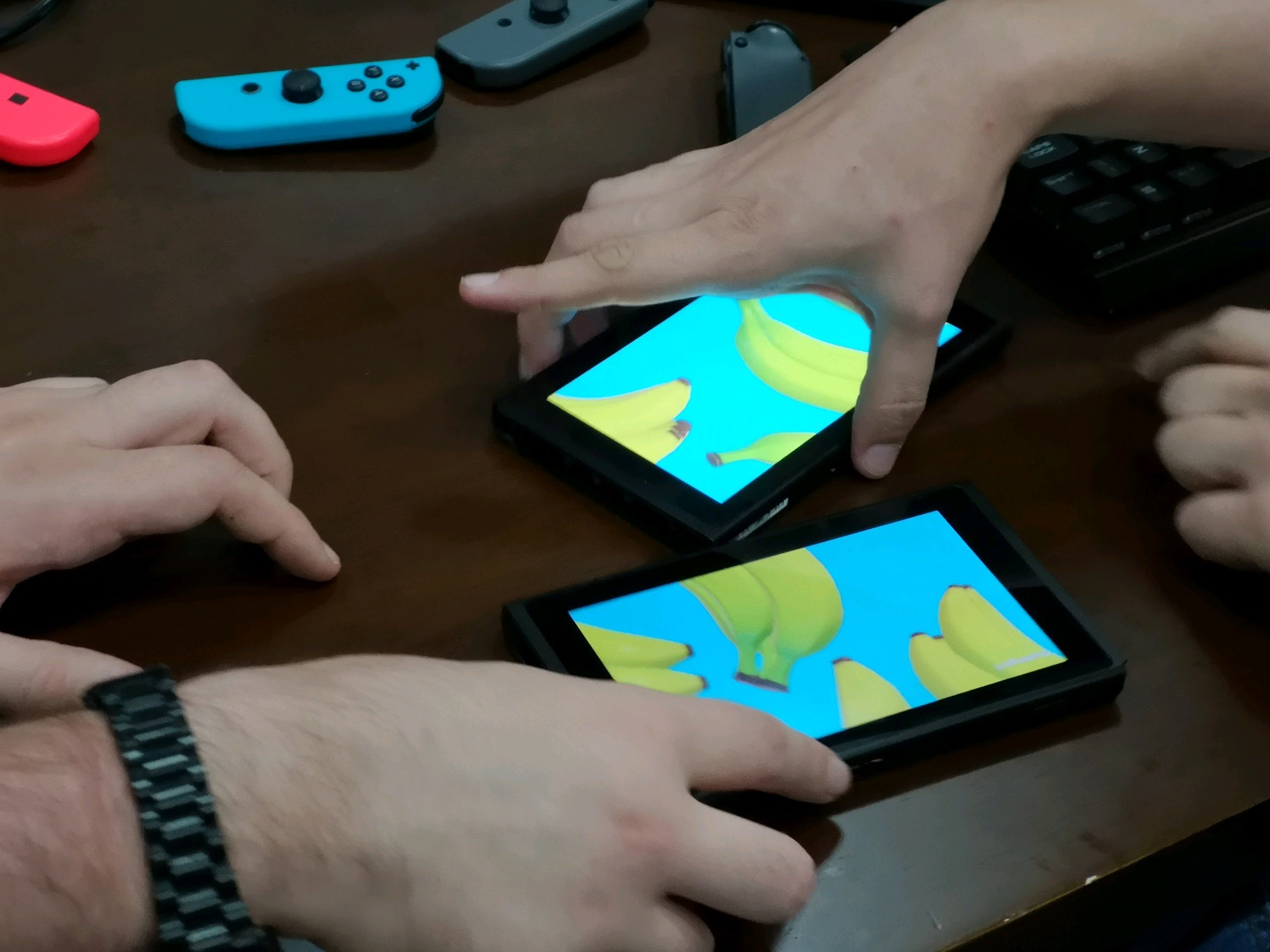 The games team get to the bottom of this whole banana business – photo credit: Alex Walker-Todd

Elsewhere, there are unlockable characters, minigames, boards and all sorts of things. These emerge through repeated play, so shouldn’t require you to grind through the game alone to have all the options for your friends — however, I must confess that I’ve not unlocked everything yet.

So far, however, playing and unlocking new items has been a breeze, and there are plenty of new areas to Toad’s Plaza, the living main menu, that I haven’t yet had the time to fully explore. What the game has on offer here, to bracket the minigames that drive the whole thing, feels generous.

It’s true that the game is largely minigames. As a result, I’d half-expected the onboarding to be a little rough — cue childhood memories of battering my friends at Bishi Bashi Special because they didn’t have the time to learn each game before my victory surface — but a practice area before each minigame letting you play the game as a tutorial meant that when playing it in the office with a mix of first-timers and Mario Party vets, there wasn’t a handicap. This despite the fact that games can have you doing anything from trying to grab coins while avoiding lightning to solving puzzles to riding a Chain Chomp after your friends/enemies.

The game probably sets the gold standard for onboarding as a party game, and this means that it’ll probably get heavy rotation out of people with four Joy-Con and the friends to clutch them.

Add more systems and the game opens up further, letting you use multiple systems to play games. The quality on the four games that support multi-device play varies, with a game about turning bananas the right way up a mind-bending delight, while a game about playing baseball had charm – with the game area being a perfect representation of a plasticky boardgame complete with awkward moving parts and faux grass – but the actual art of playing it was bizarrely soulless, a rare miss in an otherwise well-balanced collection of minigames.

Truth be told, no matter which part of Super Mario Party you play, it’s joyous. This is a game that gives you bonuses across most of its modes for high-fiving your fellow players. It’s a game that lets you play as Mario universe MVP Shy Guy. As a game, it has some limits, but it’s hard to begrudge them when it all feels so wholesome to play. Super Mario Party has that Nintendo quality that ensures nearly every element is polished to a high shine, but if the connective tissue that holds this collection of minigames together leaves you cold, there’s not a lot here to engage with. But hey, if you buy in you’re not going to have this problem at all.

Super Mario Party is a joyous bounty of content picked out in lurid colours that comes together as a great way to play games with friends after a couple of drinks, or with younger relatives.

However, it really only works as a multiplayer title with friends sat around in the same physical space. Strip that away, and you’re just shaking a Joy-Con in a room, alone.

The real Super Mario Party, truly, is the friends you made along the way.