We’re gearing up for the launch of the next Nexus, or are we? Rumours point to the next phone from Google to come with a new moniker. Google could use the Pixel branding this time around, and here’s everything you need to know about Pixel and Pixel XL.

The Nexus 6P was the first phone I ever scored a perfect 5/5, and at the time I said it was the best Android phone you could buy. It’s about 7 months later now, and I’m still confident in saying this is one of the best phones out there. Yes, the Samsung Galaxy S7 and HTC 10 scored 5/5 and 4.5/5 respectively and are both great phones, but if you’re looking for something with a bigger screen I would still highly recommend Google and Huawei’s 6P.

The Snapdragon 810 and 3GB RAM is still a fine combination and it makes for a fast phone. While the Nexus 5X seems to have suffered some performance issues, the 6P is as smooth and quick as it was on day one.

There have been a couple of updates to the camera – it’s much faster now – and you’ve of course got Android N (which we’ll hear more about at Google I/O) coming at some point towards the end of the year.

My one quibble about the longevity of the Nexus 6P comes with its build. I’ve been using a silver model and it’s fine, but I have seen a couple of black models with much of the back paint coming off. This leaves an ugly finish, and not something you’d expect from a pricey phone.

That aside, everything else still gets the thumbs up. The screen is great, camera reliable and the battery will easily make it through the day. It struggles to go two days though, but then so do most phones of this size.

I noted in my original review that USB-C was something of an annoyance simply because it wasn’t widely adopted but I feel that issue has subsided somewhat. A lot of the 2016 flagships have USB-C – LG G5, Huawei P9 and HTC 10 – and it’s becoming more and more common in laptops too.

I still love the Nexus 6P. It’s easily the best phone Google and Huawei have ever made and it seems to stand the test of time very well. Considering Google often has it on special offer, it can be even more of a bargain.

Read my original review below…

What is the Nexus 6P?

The Nexus 6P is the follow up to the poor Nexus 6 and the second pure Android device we’ve seen from Google this year after the mostly impressive Nexus 5X. It’s made by Huawei, and it’s fantastic.

It’s the first Nexus that doesn’t make any compromises and offers buyers a stunning metal design, high-end specs and an unadulterated version of Android. It’s pricier than the 5X, but it’s clear to see where the extra money has gone.

Armed with these perks the Nexus 6P impresses in every area and is, along with the Samsung Galaxy S7, the best high end Android smartphone you can buy right now.

Apparently the ‘P’ in the 6P stands for ‘premium’. Premium is a word overused in reviews but, as much as I hate it, it’s the best way to describe the overall design of the Nexus 6P.

And, that shouldn’t really be a surprise. Even though Huawei’s own phones always fall down due to overbearing software, the Chinese firm has been excelling in design for a while now. This year’s Mate S being the best yet. 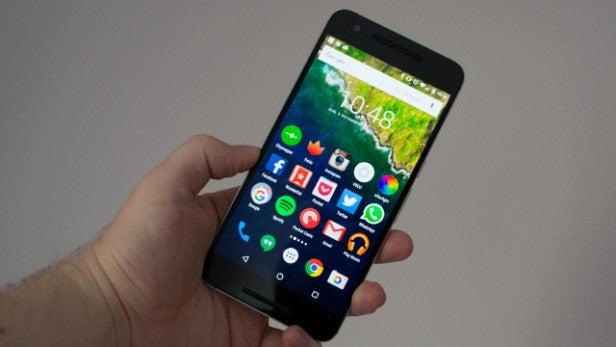 Just like the Mate S, the Nexus 6P has an all metal design, with heavily chamfered edges leading into a Gorilla Glass 4 coated display. The antenna bands are cleverly hidden, while the flat sides and ever so slightly curved back make it a thing of pleasure to hold.

Along the sides you’ve got a well placed standby button just above a nice, clicky volume rocker. That power button is slightly textured, so you can easily jump straight to it. This is a small touch, but the details are important.

Flip the phone over and the Nexus branding is stencilled in vertically with the circular fingerprint scanner sitting just above. Google is calling this Nexus Imprint – I’m not sure why it needs a name – and it’s up there with the iPhone 6S and Xperia Z5 in terms of speed. 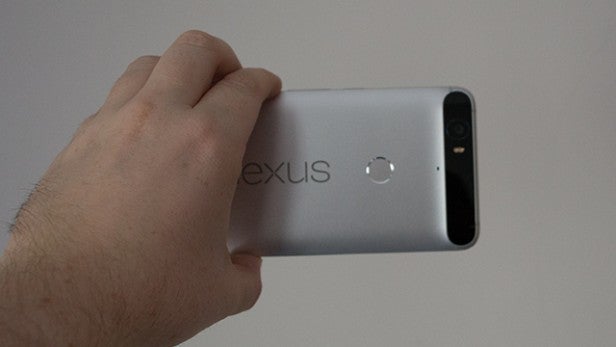 I’m a big fan of the fingerprint reader being on the back. It’s the natural place my finger reaches for when I pick the phone up and it takes just a slight touch to zip past the lockscreen and plonk you right on the homescreen. Pair it with the super fast set-up process – it takes about 20-seconds, whereas the iPhone can take over a minute – and Marshmallow’s baked in fingerprint scanner support and you’ve got a fantastic security package.

Now, if there’s one Nexus 6P design choice that’s caused a bit of a stir since the leaked images first hit the interwebs it’s the glass covered hump running across the top.

This houses the camera, flash plus a bevy of sensors. Others might disagree, but I like it. Unlike the smaller humps on the iPhone 6S or Galaxy S6, having it across the whole width means it doesn’t wobble when I use the phone on a table and the periscope-like design is nicely eye-catching.

It’s far from the ugly, eyesore some refer to it as, and if it makes the camera better then I’m even more for it. But, if you’re still against it, I would suggest grabbing the black model as it hides it better than the white or silver versions. 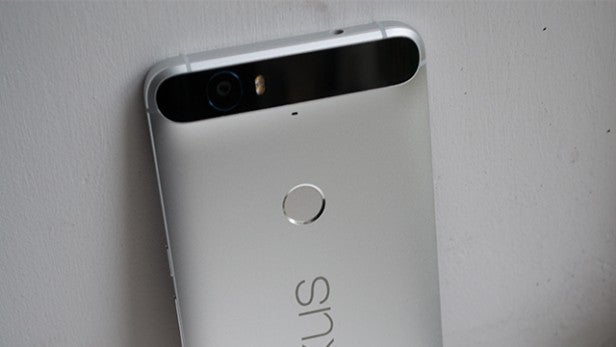 With a 5.7-inch screen, the Nexus 6P is a big phone. But, phones in general are getting bigger and it doesn’t feel anywhere near as cumbersome as the Nexus 6. It’s slimmer and lacks the monstrous width that ruined the 2014 Nexus.

Thanks to the almost non-existent side bezels the whole phone isn’t much bigger than the 5.4-inch screen toting Blackberry Priv and it’s slightly smaller than the 5.5-inch iPhone 6S Plus.

It could be smaller too, but Google and Huawei decided to have dual front-facing stereo speakers flank the display. Again, they made the right choice. Proper sounding speakers are always better than a few weedy holes on the back.

My only criticism about the Nexus 6P, and this is ridiculously minor, is I would prefer the headphone jack to be on the bottom, rather than on the top.

This is by far and away the best looking Nexus yet, and its use of metal, glass and eye-catching design choices put it right up there with Samsung’s Note 5 and Apple’s iPhone 6S when it comes to visual allure. 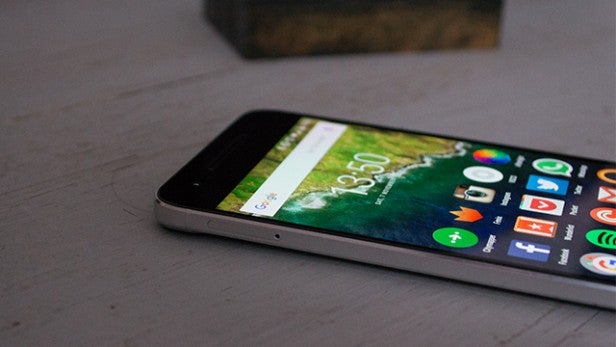 The Nexus 6P’s 5.7-inch display features a Samsung AMOLED panel, with a pixel-dense quad-HD resolution and boy, is it good.

While the Nexus 6 suffered with poor viewing angles and whites that almost looked pink, the screen on the 6P is rich in accurate colours and has nicely inky blacks. As it’s AMOLED, whites can look a little muddy but really, come on, that’s a small sacrifice I can live with.

Colours have a vivid punch – blues, reds and oranges pop out, but they’re still accurately shown, while the green shades in Marshmallow’s stock wallpaper look exceptional. Some might say they’re too saturated, but I’d disagree, especially when you compare it to those truly over-saturated panels Samsung used a couple of years ago. 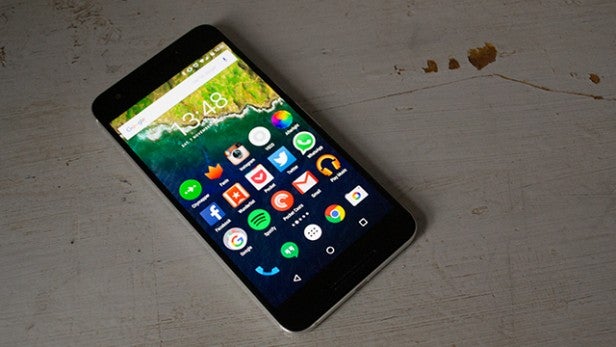 If you prefer things a little more toned down, Google has sneakily added an sRGB display mode deep inside the Settings menu. It cools the colours down a bit, but I prefer the original mode.

Viewing angles are fantastic, as is outdoor visibility. I’d like a slight hint more brightness though, and the screen’s auto setting is a bit dodgy. It judders noticeably as it changes, but i’ve found this an issue on most Android phones.

Ambient Display is another bonus that comes from the AMOLED panel. Pick the phone up, or wave your hand over it, and a brief black and white view of the time or any current notifications will pop-up. It’s great – handy if the phones on your desk and it doesn’t use as much battery as lighting up the whole panel.