When I first reviewed the Nexus 5X it was one of the best mid-range phone’s available. For less than £400 you got a stellar handset that offer all the perks of Google’s then new Android Marshmallow operating system, without the bundled bloatware often found on third party skins.

However, having used it as my primary personal smartphone for over six months I encountered a number of significant issues.   For starters, the performance has dramatically dropped. Like the OnePlus 2, the Nexus 5X performance has gradually gotten worse the more I’ve used it. After my first three months the device would on occasion inexplicably stutter. Another month on it began completely stalling about once a week.

Four weeks later I found myself having to restart the phone every other day to get it to run smoothly.  The Nexus 5X’s battery life has also suffered. Smartphone’s battery lives always gradually deteriorate, but since an early software update at the end of 2015 the Nexus 5X’s has outright bombed.

Overnight the phone went from lasting between one and a half to two days use off one charge to struggling to make it through the day. With heavy use I’ve also managed to wipe the battery within four hours.   Intensive use entailed listening to music while browsing the web on a 30 minute train journey, periodically playing games, like Banner Saga, regularly checking my email, messages and social media feeds and watching a episode of Vikings on Amazon Instant Video.

The issues are a shame, as outside of them, the Nexus 5X remains a great phone. The fingerprint scanner is one of the fastest and most accurate around and it’s display is still one of the best seen on a phone in its price point.  It remains one of the most future proof Android phones around when it comes to software. Nexus devices always get updates to future versions of Android as long as their hardware is technically able.

As a result, the Nexus 5X is one of a select few handsets likely to get upgraded to the final version of Android N when it launches at an unspecified point later this year.

The Nexus 5X is a phone that hasn’t stood the test of time all too well. Deteriorating battery and performance are a noticeable and ongoing frustration at the moment Hopefully a future Android update will fix the issues, but for now you’d be better of paying a little more and getting the larger Nexus 6P if you want the best unskinned Android experience.  You can read my original Nexus 5X review below.

What is the Nexus 5X?

The Nexus 5X is the smaller and more affordable choice in Google’s current smartphone line-up. It sits behind the Huawei-made Nexus 6P, which carries a larger 6-inch screen, slightly faster hardware and a higher, £449 asking price.

In contrast, the £339 Nexus 5X is significantly cheaper than the 6P and slightly more affordable than Apple’s new iPhone SE. But, it is more expensive than some competing handsets, such as the £250 OnePlus 2, which on paper match many of its specs. It isn’t quite the straightforward bargain the classic Nexus 5 was.

But the 5X goes a long way to justify its increased price tag thanks to its completely unskinned, future-proof version of Google’s latest Android 6.0 Marshmallow operating system. In fact, the software makes the Nexus 5X one of the best smaller smartphones on the market. 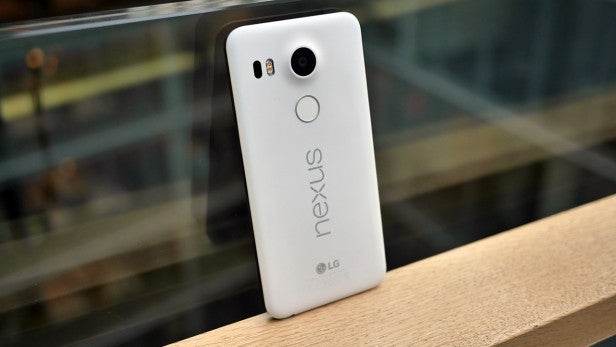 The Nexus 5X has a similar design to its spiritual predecessor the Nexus 5, which isn’t surprising given both were built by LG.

Some will feel the Nexus 5X looks a little dull, or unimaginative, but I’m a big fan of its design. The original Nexus 5’s soft touch back made it one of the most comfortable handsets I’ve ever used. This remains true on the Nexus 5X thanks to a similar, soft-touch rear. LG has clearly taken what people liked about the Nexus 5 and refined it, which is great news.

Its 5.2-inch screen means this isn’t a giant phone, either. It’s about the same size and weight as the Samsung Galaxy S6 – it’s just a few centimetres taller and wider, and weighs just 136g. Very little space is taken up by the bezel surrounding the screen, a fact helped by the new fingerprint scanner being on the back.

LG has made a few important design upgrades that separate it from its 2013 predecessor, though. The phone features a USB Type-C port, as opposed to the Nexus 5’s older microUSB input. Google claims the input will offer improved data transfer and charge speeds.

As noted just now, LG has also taken advantage of Android Marshmallow’s built-in “Nexus Imprint” support and added a fingerprint scanner to the back of the Nexus 5X.

The scanner offers similar functionality to Apple’s Touch ID sensor, so you can set the Nexus 5X to unlock or approve certain actions – Android Pay purchases, for example – only after its user has proven their identity.

The setup process is easy as pie and simply required me to tap a finger on the scanner a few times.

Once set up, I found the scanner is one of the best available on an Android smartphone. It read my fingerprint in nano-seconds and during my whole week with the Nexus 5X never once failed to recognise me – even when being used in the pouring rain. 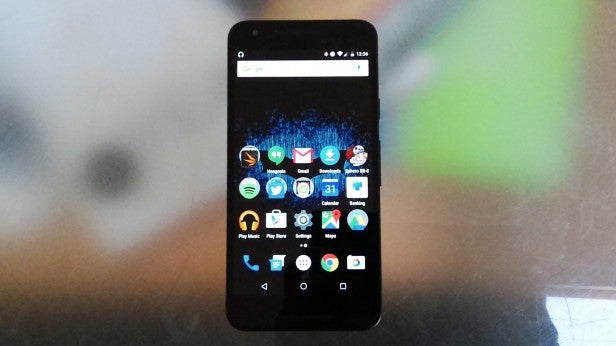 The original Nexus 5 and Nexus 6’s screens were both sub-par. The Nexus 5’s screen was slightly washed out and a little dull to look at. The Nexus 6 took things to the other extreme by featuring a horribly oversaturated display that distorted colours.

The Nexus 5X’s 5.2-inch, 424-pixel per inch (ppi) display sits in a happy middle ground between the two. Colours are well balanced and don’t suffer from the same oversaturation seen on the Nexus 6. They’re also reasonably vibrant and don’t look overly dull, as they did on the Nexus 5.

Black levels are also fairly good, though they aren’t as deep as those seen on top end competing handsets’ AMOLED displays, like the Galaxy S6. Whites are clean and the viewing angle is wonderfully wide and in my mind beat those of the competing OnePlus 2.

While it isn’t ‘Quad HD’ like the Nexus 6P, icons and text on the the 5X’s Full HD (424ppi) screen look suitably sharp. I don’t have any serious quibbles with the Nexus 5X’s screen.