The OG Google Pixel cemented itself as one of the best phones of 2016 and it’s still a great choice for those after a more affordable flagship experience today. Despite this fact, Google’s first flagship after refocussing its efforts has some rather notable holes, compared to the top devices now dominating the smartphone space. Its design is unimaginative and chunky, the storage skews it’s available in are limited, there’s no water resistance and the display on-hand is comparatively archaic by today’s standards.

Yet, the Google Pixel still has a stupendous camera that makes it instantly appealing. The photos captured by this dinky, chunky phone are sublime and unmatched even by other 2016 flagships such as the LG G6 and Samsung Galaxy S8.

The software too plays a big part in this phone’s success. Pure Android 7.1.1 is smooth and well designed, something a lot of the skins on competing phones just aren’t. Plus it was first in the queue for Android O.

Having used the Pixel since its release, there are a few things that stop me wholeheartedly recommending this phone. For one, it’s very expensive, especially for the meagre 32GB option. There’s also no expandable storage, so I would thoroughly recommend saving up a bit more and going for the 128GB model.

It’s also not the most durable phone, in fact I don’t think I have come across a metal phone that picks up dents and dings quite so much as the Google Pixel. The paint on the back is also prone to scratching off, so a case is probably in order.

Performance has stayed consistently fantastic, I think this phone is faster in general use than the Snapdragon 835-packing Galaxy S8, and Google’s steady stream of updates have kept it feeling fresh. I was never completely impressed by the battery life, but it still manages to get through the day.

If you want a phone with the best camera and software available, the Google Pixel remains a fantastic choice. It’s not the flashiest phone in 2017 and the fact it still commands a high price might put some off, but if you want the best photos from a phone that this is your top pick.

What is the Google Pixel?

The Google Pixel is a landmark device, signalling the first proper foray into phones by the search engine giant. And boy, has it done a good job.

The Pixel is available in two sizes – the smaller one reviewed here and a larger 5.5-inch Pixel XL – and has one of the best cameras on any phone, along with a software experience that’s better than any other Android device.

You have to pay a premium for these features – this certainly isn’t a Nexus-priced device – but it’s far from the first phone to cost a pretty penny. And when it’s this good, it’s worth paying that bit extra.

The least exciting part about the whole idea of the Google Pixel is its design. I know many people who dislike it completely, but I find it perfectly serviceable. It isn’t as flashy as Samsung’s Galaxy S7, but it’s much nicer than than the latest batch of iPhones.

The body is made from metal and glass – pretty much a given these days – and it tapers down ever so slightly on the rear to help avoid any unnecessary camera bumps. A circular fingerprint sensor sits below the camera sensor, and both are encased in a divisive glass panel that runs about a third of the way down the back. Some in the TrustedReviews’ office hate it, but I think it adds some flair, catching the light nicely. It is a fingerprint magnet and scratches very easily, however.

Unlike Apple, Google includes a 3.5mm headphone jack – but I’d have preferred for it to have been placed at the bottom rather than the top of the phone. In addition, Google has used a wide bezel above and below the screen – just like the iPhone. It would have been good to see this space used for a pair of front-facing speakers – maybe this will come with the Pixel 2.

The sides are heavily chamfered, and this helps the device to fit comfortably in your hand. This is one of the easiest phones to hold, helped by the fact it isn’t overly thin.

It’s also completely usable in one hand, something that can’t be said for the larger Pixel XL. It’s roughly the same size as an iPhone 7, just a little taller and marginally thicker. 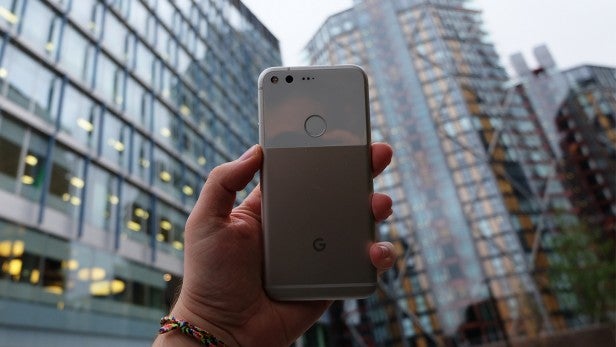 5-inch displays are becoming a rarity in the Android space, but for many they provide the perfect mix of portability and size. However, the problem – aside from the dearth of choice – is that smaller phones tend to be hamstrung by weak components and a lack of features.

Thankfully, this isn’t the case here. This is a 5-inch display phone with the innards of a larger device – and that’s great news.

The Pixel’s display is fantastic, comfortably one of the best at this size. It’s an AMOLED panel – the same tech Samsung uses on its Galaxy series – with a 1080p resolution. This isn’t as high as the larger Pixel XL and its quad-HD panel, but due to its smaller size you really won’t notice the difference.

It’s pin-sharp with zero jagged edges around icons when you’re looking at it from a normal distance. Get right up close, with your eye almost touching the screen, and you might notice a tiny bit of pixellation around the battery icons and on-screen buttons. Realistically, though, you won’t be using the phone from such a distance.

I only question Google’s decision to use a 1080p panel here when it comes to VR. With the upcoming Daydream View headset using the phone display, the experience might be worse on the Pixel’s lower-resolution screen as opposed to the Pixel XL. I haven’t had the opportunity to use them together yet, so will keep my thoughts open until I do.

Everything else about the screen is great. Since it’s AMOLED, there’s a lovely kick to the colours, yet saturation looks accurate. Often these display types overblow reds and greens, but they look fine here. Blacks, too, are deep and inky – although there’s a slight grey tinge to the Pixel when it’s placed side-by-side with the Pixel XL or a Samsung Galaxy S7.