Update 21/04/2016: Even though the Galaxy Note 5 has been on shevles for over 6-months now, us UK dwellers have still yet to see an official release. We’d say the time has been and gone for the Sammy’s latest 5.7-inch device ever hitting these shores, but fear not. We’re already starting to hear rumours about the upcoming Note 6 and it sounds rather special. Early internet talk speaks of a 4K display, 6GB RAM and 256GB storage, with a release day of ‘mid-May’.

If you can’t wait that long, you’re not out of luck. The Samsung Galaxy S7 Edge boasts a 5.5-inch quad-HD display, though it feels much smaller, and packs a nicer overall build than the Note 5. You don’t get the S-Pen, though.

What is the Samsung Galaxy Note 5?

The Samsung Galaxy Note 5 is the 5.7-inch smartphone successor to the Note 4, arguably one of the standout phones of 2014. So it’s somewhat surprising that Samsung has taken the decision not to bring its new phablet to the UK.

Instead, it’s hoping the S6 Edge Plus, along with the S6 and S6 Edge will fly the flag and battle against the iPhone 6S and 6S Plus. But it still seems like a strange decision considering how well received last year’s Note was.

Was it the wrong decision? I’m not so sure. Having lived with the new Note and the Note 4 before it, I can see why Samsung may have decided to leave its latest phablet on the sidelines in the UK, as there are a few design changes that may alienate diehard fans of the series. But, even with these issues the Note 5 remains one of the best phablets on the market.

Tempted by the S6 Edge+? Here’s our hands-on video:

I didn’t think there was a great deal wrong with the Note 4’s look, but as is custom with Samsung, it does like to make some improvements where it can. In the case of the Note 5, it’s quite a dramatic design overhaul. It’s basically a Samsung Galaxy S6 blown up. There’s glass on the front and back, the cool silver anodised aluminium metal trim and a rear camera sensor that protrudes even more than it does on the Note 4. It also takes the curved edges on the S6 Edge and Edge Plus and puts them on the back. In my opinion, it makes more sense ergonomically than having them up front and as a result makes it a much more comfortable to hold.

The most noticeable difference when you get it in your hand is that it’s not as wide as last year’s phone. Samsung were more successful than most at making its big phone easier to use in one hand, and it’s more of the same with the Note 5. In fact it’s better. The screen bezel has been reduced significantly down the sides of the 5.7-inch screen and it’s better-looking phone as a result.

Samsung has waved goodbye to the textured plastic back and replaced it with a glass panel, similar to that seen on the Galaxy S6. The bad news is the back is no longer removable. That means no micro SD card support or removable battery. Personally, I’m not disheartened by the fact Samsung has taken this option to follow Apple’s approach, but I can see why micro SD card support would be beneficial to loyal Note users who don’t want to rely on cloud services. 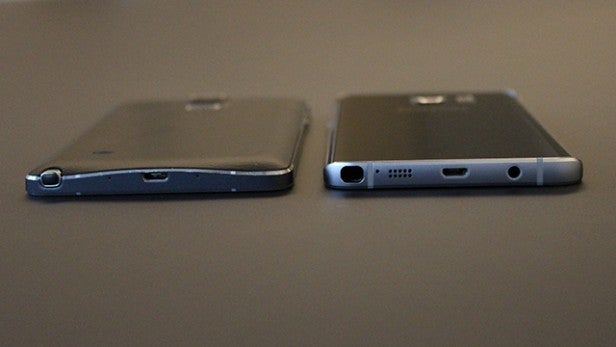 The headphone jack has moved to the bottom of the phone alongside the micro USB charging port and single speaker. In its place is the Nano-SIM card slot, which will mean a change for Note 4 users. There’s now even more sensors above the screen and both multitasking and back buttons are more prominent alongside a smaller home button with the improved built-in fingerprint sensor. It’s the same one as the S6, so you can tap instead of swipe to unlock your phone. It’ll also support Samsung Pay when it launches outside of the US. IR blaster fans will be disappointed to find out that this is missing in action, so you’lll have to look elsewhere for a backup remote control.

The standby buttons and volume rocker are in an identical place and I’ve not forgotten about the S Pen. It’s still tucked away at the bottom of the phone but you no longer have to dig your finger into the gap behind it to remove it. Now you simply press the top of the stylus in and it’ll pop out thanks to the spring loaded mechanism. Apart from a change in colour and finish, it’s not a dramatically new experience holding it. It does now have a ball point-style button up top that doesn’t have any function apart from making it feel more like a pen. The grippy texture on the Note 4’s one is now replaced with a flat light grey surface and there’s just a single button on the side. Samsung still packs a set of additional nibs in the box along with a tool to easily remove them. The nibs let you choose between two pressure sensitivities.

Using it day to day, the Note 5 manages to retain that great big screen in a smaller body that’s easier to stretch your fingers across. It’s noticeably heavier than the S6 Edge Plus, but less so than the Note 4 (there’s a 6g difference). Having a big glass back worries me especially having dropped the S6 and seen the back crack. But I can’t question that the Note 5 looks the part and the changes on the whole are welcome ones. 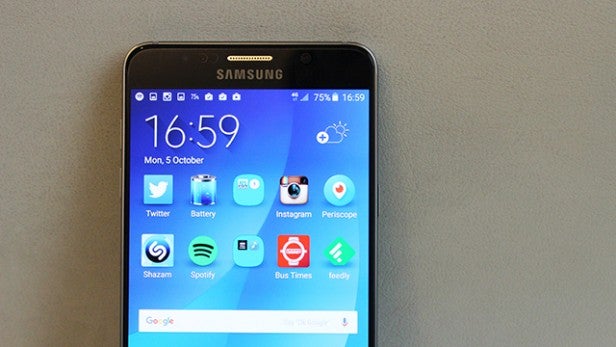 The Note 5 has the same 5.7-inch screen with Gorilla Glass 4 as its predecessor, which means you get all the benefits of the 1440×2560 QHD resolution display. It also has the same Wacom digitized layer to help sense the pressure when you pop out the S Pen from its little compartment.

The display has the same punchy colours and exceptional black levels as the Note 4’s. Get up close though and the slight increase in PPI pixel density pays off. It looks sharper and you can notice it especially on the home screen where app icons look cleaner and clearer.

The Note’s Super AMOLED screen is built for watching videos and that’s inevitably where the Note 5 excels. You still get those deep blacks and the bump in PPI and brightness helps things feel all that more vivid. Brightness has been cranked up notch, not that things were dull on the Note 4, but it’s a notable improvement.

If there’s one criticism it’s that out of the box screen colours look a little oversaturated. Samsung does still offer screen mode options to turn things down a notch. Opt for the basic mode and it doesn’t feel as bad. But I’m nitpicking here.