The iPad mini is still available to buy but you shouldn’t confuse it with the new iPad mini 2 Retina which looks exactly the same but is more expensive and has some significant improvements over its predecessor.

Key differences between the iPad mini and iPad mini 2:

Screen:
The newer iPad mini comes with a Retina display. This offers a much higher resolution than the original iPad mini and it really tells. The screen is much sharper and brighter – it’s one of the best tablet screens around. That’s not to say that the original iPad mini’s screen is rubbish. In fact it’s decent. Video and pictures look good, it’s when reading text that you’ll wish for a higher resolution.

Processor:
The iPad mini comes with the iPad 2’s A5 processor in tow. It’s a little long in the tooth now but has no problem running apps. The newer iPad mini comes with the same processor as the iPhone 5S, the 64-bit A7. You’ll find that 3D games, like Infinity Blade 3, offer more detail and 3D effects on the Retina screen of the new iPad mini. If you want to use heavy duty apps like 3D rendering and video/photo editing you may want to pick up the more expensive iPad mini, but if not the processor jump is less of an issue than the screen.

Camera:
The new iPad mini has a slightly better front and rear camera. You’ll get better shots in lower light conditions with it.

Battery life:
Both iPad minis last about the same amount of time – 10 hours of constant use.

Cost:
This is the other big difference between the original iPad mini and the new one. The original has dropped in price and costs £249 for the entry level 16GB Wi-Fi only model. The iPad mini Retina costs £70 at £319. If you only intend to use your iPad for light apps and browsing then the original iPad mini should suffice, but if you can afford the extra £70 you won’t be disappointed by the stunning screen on the newer model.

Living with the iPad mini

Previously tipping the iPad mini as one of the first true rivals to the iPad’s mantle of tablet king, and a few months on from launch and the Google Nexus 7 rival is still coming into its own, outselling its 9.7-inch sibling and marking itself out as the most desirable offering in all of tablet land. What’s more, since the iPad mini hit retailers, there has been no sign of a device to truly rival it despite the MWC unveiling of the stylus toting Samsung Galaxy Note 8.0.

Virtually as good as new five months into life, the brushed aluminium rear of the iPad mini review unit we have been making use of plays host to just a couple of small scratches, despite being tossed around in bags, suffered a few knocks and drops and accompanied us on multiple trips to the US and across Europe. Protected only by the official iPad mini Smart Cover, the device’s screen is without damage, standing up well to the rigors of heavy, everyday use. That said, the iPad mini’s oleophobic coating isn’t all that it is cracked up to be, with smeared fingerprints the cause for a screenwipe always being at hand.

In terms of connectivity, the 4G iPad mini, paired with an EE contract has come into its own, allowing us largely uninterrupted access to online content whilst on the move and away from Wi-Fi hotspots.

Offering strong signal strength in areas of good coverage, the 4G iPad mini connection is let down only by the limited 4G coverage currently bestowed upon the UK. Although the 4G services can be patchy at times, the tablet seamlessly transitions to 3G networks when required, ensuring our online activities have remain uninterrupted. What’s more, with EE recently confirming 4G is now available across 50 UK towns and cities, the draw of a 4G contract continues to grow stronger.

The main area where the iPad mini has failed to continue to shine five months after launch, is its display. Although we highlighted the iPad mini screen as an area for improvement during the original review, during the past few months, the niggling issue of its lack of a Retina display has continued to grow. Although still more than perfectly acceptable, when reading text-based content, such as through apps such as Pages, there is noticeable pixilation to the characters.

Although the 64GB iPad mini is now brimmed with all manner of content, from photos, videos and music to apps and games, the tablet shows no sign of slowing down, quickly and effortlessly jumping between content and keeping the user experience, smooth, free-flowing and efficient.

Apple might have revolutionised the tablet market back in 2010 with the launch of the 9.7-inch original iPad, but the Cupertino based company is late to the 7-inch tablet party. With the iPad mini, however, it is certainly a case of better late than never.

Not your typical 7-inch device, the iPad mini is in fact a 7.9-inch tablet, with that extra 0.9 of an inch providing you with a very welcome 35 per cent more on-screen real-estate without adding too much to the device’s overall size. Able to be held in a single hand, the iPad mini answers many of the gripes with the original iPad’s difficult, at times cumbersome, size.

Featuring Apple’s customary premium price tag, iPad mini prices kick off at £269, a figure that is pleasingly £139 cheaper than the entry level iPad 4. Despite this, the iPad mini still costs £110 more than the basic Google Nexus 7, arguably the iPad mini’s closest competitor and a device that, on paper at least, is a more specs impressive offering.

With the iPad mini screen featuring an iPad 2 mimicking 1024 x 768p screen resolution, Apple’s stunningly designed, brushed aluminium beauty backs this up with a dual-core A5 processor. The Android 4.1 Jelly Bean running Google Nexus 7, on the other hand, boasts a 1280 x 800p HD display and NVIDIA Tegra 3 quad-core processor, both of which are considerable upgrades.

Cameras front and rear, the iOS 6 operating system, Apple’s compact and fast new Lightning connector (as debuted on the iPhone 5) and a claimed 10 hour battery life complete the core iPad mini features list but, if we are being honest, this is not where the iPad mini excels. Unrivalled in terms of design and build quality, the iPad mini looks, feels and acts like a premium device and one which has the presence of an advancement of the 7-inch tablet market. 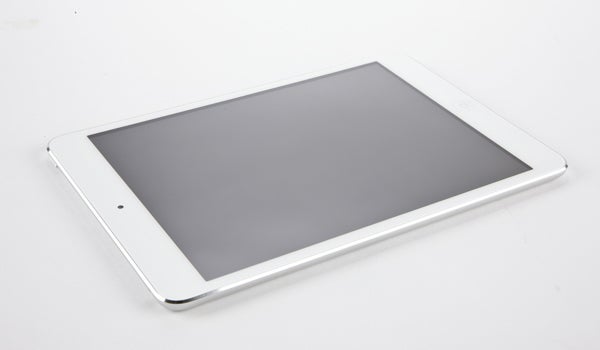 As with virtually all Apple devices, the iPad mini is an undeniable beauty, combining sleek, seamless edges, a stunning brushed metal back and strong build quality that is unrivalled by anything else on the 7-inch tablet market.

On first looks, it is most certainly a case of ‘Apple has done it once again’. A company that has a knack for producing some of the best looking gadgets on the market has instantly transformed the 7-inch tablet scene with the iPad mini, a device that oozes style and offers a pleasingly friendly user experience from the off. Whereas many of the other 7-inch devices on the market feature plastic heavy constructions, with the iPad mini Apple has taken the premium approach, a move that, although showing in the price tag, is one which separates the device from its competition.

Lining up at a svelte 7.2mm thick and just 308g in weight, despite the iPad mini’s additional screen size, Apple’s first 7.9-inch tablet enters the market with a more solid and reassuring build than the competition. With no flex or creaking when putting the device under considerable amounts of pressure, the iPad mini puts your mind at ease and offers a strong yet lightweight form factor that is more than just easy on the eye. Press the centre of the back and there’s just a little give which you don’t get on the larger iPad, and pressing the screen does result in the LCD distorting more readily but neither detract from the overall effect. 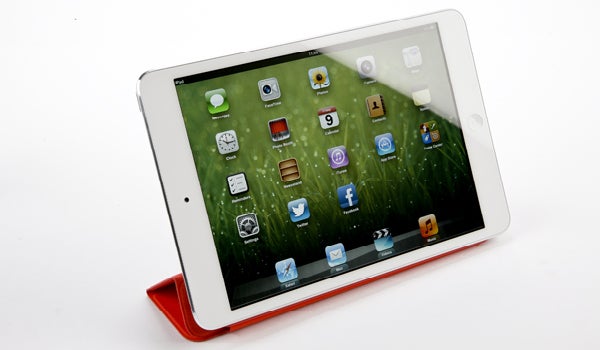 With Apple keen to reassure us that this is not a mere 7-inch tablet, but in fact a game changing 7.9-inch device, it is clear to see why the iPod Touch manufacturer has plumped for the near extra inch. Although not as sharp as some the extra screen space creates a more immersive viewing experience that draws you in.

Despite being a couple of millimetres too wide to be held comfortably across the centre for prolonged periods, you can at least do so. And, if you do grip the corner instead, the lower weight means it remains comfortable for hours on end. With the tablet’s minimalist weight distributed evenly throughout the device’s body, the iPad mini is also well balanced in the hand not proving awkward to hold or tiresome to keep steady.

With few physical connection ports, the iPad mini’s power providing Lightning connector is hidden discretely out of the way on the device’s base whilst, somewhat strangely, the 3.5mm audio connector is situated on the top of the tablet. Having recently moved the iPhone 5’s audio connector from the top of the device to the base for improved, less intrusive access, it would have been expected to see Apple do the same with the iPad mini. As it is, however, the top-mounted connection can cause headphone cables to droop across the screen on occasion; an issue that although only minor can grate when attempting to watch a movie. 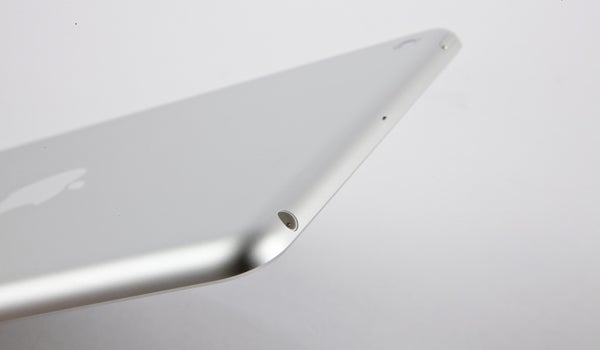 This seemingly seamless design isn’t without a slight gripe, however. When playing a game such as Need for Speed: Most Wanted in which the device needs to be held in a landscape manner, the iPad mini speaker location becomes a cause for concern. Situated on the base of the tablet, either side of the new 8-pin Lightning dock connector, the speakers are easily muffled by the hand when holding the device in a standard and conventional manner, an issue that can severely diminish the sound quality and deplete the overall enjoyment of the experience.

Also, as visually appealing as the slim, brushed metal, flat backed design is, it does have a slight cost in terms of practicality. With little area to gain a finger hold, it can prove irritatingly difficult to pick the iPad mini up off of a hard flat surface without having to drag it to the edge of the table or desktop first.

Next
Screen, Interface and Usability Review