Before Burnout developer Criterion came along, the Need for Speed franchise was rapidly declining, and had become little more than a chance for Fast and the Furious fans to live out their daydreams. Fast forward a few years and Criterion has had a large hand in saving the franchise, thanks to some tender loving care and a substantial dose of Burnout inspired features.

Need for Speed: Most Wanted is Criterion’s second game in the franchise, and builds on the excellent Need for Speed: Hot Pursuit by attacking with the same formula as the previous games: classic arcade handling, thrilling joyrides and plenty of cars to find, billboards to smash and records to beat.

Whether that is enough is another story altogether – Need for Speed: Most Wanted arrives just a week after Forza Horizon touched down with a V12 roar and parked itself in our disc drives, and Criterion will have its work cut out competing with Playground Games’ masterpiece. 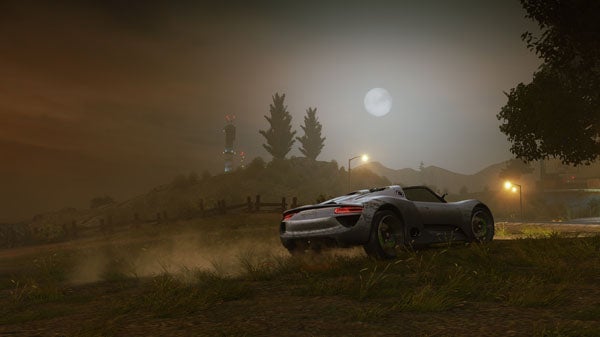 Need for Speed: Most Wanted Storyline

As you can imagine, there’s a simple plot to Need of Speed: Most Wanted. You’re a racer in Freehaven, the self-proclaimed home of illegal street racing, and you’re looking to make your way to the top of the tree. The top 10 street racers of Freehaven are known as the ‘Most Wanted’ – 10 racers who continually flaunt the law and get away with it, rumbling around the virtual environment in a variety of growling supercars.

Becoming the top dog in Freehaven requires the earning of many experience points, thankfully something that comes with practically everything you do, from winning races to finding new cars. At various XP thresholds you can challenge one of the Most Wanted, for a place among the elite and the chance to shut them down (i.e. ram them into a wall) and win their car off them. And, that’s really it. 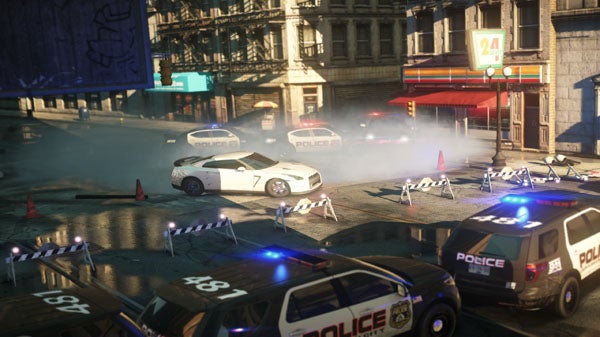 Need for Speed: Most Wanted Graphics

On a graphical front, for the most part Need for Speed: Most Wanted impresses. Freehaven looks fantastic, with the urban sprawl of the inner city accompanied by forested country-side as you wind your way around the environment. Dynamic lighting really is a double-edged sword though. Buildings look fantastic as the sun hits them, but if you come over the hill into a bit of solar-flare, everything looks a bit blurry, like your driver’s contact lenses just fell out.

Need for Speed: Most Wanted also suffers from considerable frame-rate issues. Hit wanted level five or six and a swarm of angry police cars can cause a significant and sudden drop in frame rate, and we’ve noticed occasional points where the game will seemingly drop a number of frames, suddenly jolting you forward (or often, into an oncoming truck). Whether these issues are present on PS3 or PC we couldn’t say for sure, this review is based on the Xbox 360 version of the game. 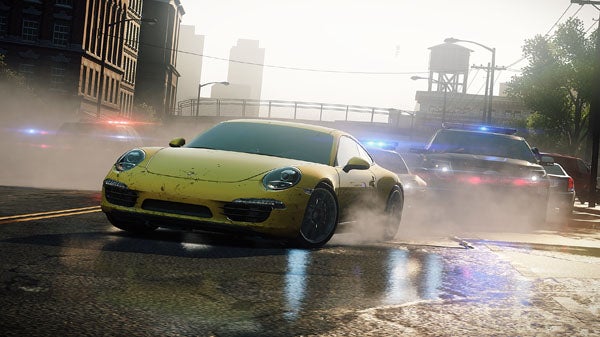 Need for Speed: Most Wanted Gameplay

If you’ve played Criterion’s preceding games, you’ll immediately recognise that Need for Speed: Most Wanted builds on the foundations of past releases. The first is Need for Speed: Hot Pursuit – Criterion’s first bite at the Need for Speed apple, which introduced the friend-tracking autolog system that Most Wanted uses so well to monitor your friends and their records. The second is Burnout Paradise, Criterion’s magnum opus that really proved that an open world competitive driving game could be done well.

The combination of these two ideas already makes for a fantastic game. The crux involves racing, obviously but Need for Speed: Most Wanted is about racing dirty, and no trick is too filthy. If you’re struggling to get past an opponent, a quick shunt can send them hurtling into a wall, or even another car, giving you a bit of a lead and a bit of extra experience into the bargain.

The basic gameplay in Need for Speed: Most Wanted is simple, but fun and satisfying in equal measure. Don’t get us wrong, this is obviously a recipe for success, but Most Wanted’s single player could be so much better.

Need for Speed: Most Wanted Cars

Cars are found, rather than being earned or unlocked in Need for Speed: Most Wanted, with the exception of those driven by Freehaven’s Most Wanted that is. The cars that you find in so called ‘jack spots’ can be obtained with a simple tap of a button, and once you’ve found them you can drive them at any point, from their spot in the city. This is all well and good, but it does feel a bit alien, and there doesn’t seem to be an obvious reason for this change in mechanic.

Many events are unique to the vehicle you’re driving, so if you want to do a race with the Bugatti Veyron for example, you have to get into your Bugatti (you can fast travel to it once you’ve found the car) and then drive it all the way to the start line – a pretty tedious process to go through for every race, in every car. And god forbid you run into the cops… 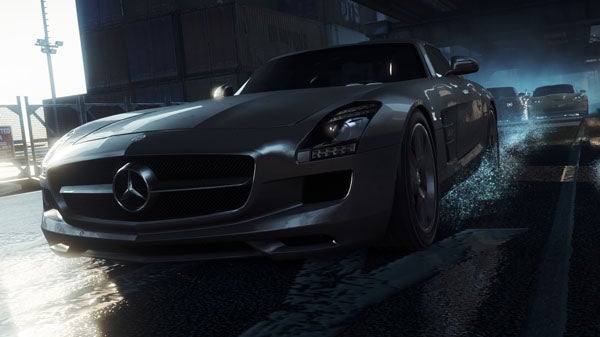 Although they provide some of the games most fun and most thrilling moments, the cops quickly become incredibly annoying. More than just annoying, downright soul-crushing. If you’re early in the game, or driving a car that hasn’t had any upgrades yet, namely nitrous oxide, getting away from the cops is really, really tough. It goes against every fibre of our beings to give ourselves up on the spot (the easiest course of action) but running away normally results in a never-ending chase, one that only finishes when you give up, fall asleep or manage to wedge yourself into a corner. We even drove off a cliff one time, and still spawned at the top and drove away again, with a small herd of flashing rozzer-mobiles in tow.

To add insult to injury, if you’ve driven across the map to get to an event, and you manage to attract the attention of a police car, you can’t do anything until you’ve successfully escaped the pursuit (did we mention this is practically impossible without nitrous?) And if you simply allow yourself to get caught, the game will spawn you back in the jack spot of the car you’re driving, potentially back where you came from. It’s maddening, and yet so obvious. 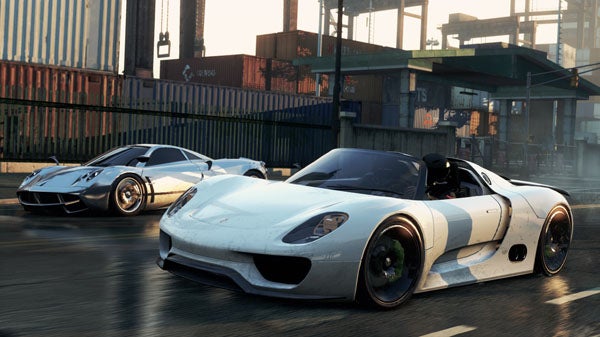 Need for Speed: Most Wanted Multiplayer

Where the single player feels let down by lack of care, the Need for Speed: Most Wanted multiplayer options feel incredibly well-devised and every bit worth the box price in their own right.

The multiplayer is very reminiscent of Burnout Paradise, as Need for Speed: Most Wanted takes everything that was good about the mix of free-roaming and racing events that the former did so well. At the same time, the developers have clearly thought about how to improve on a formula that was so good already, and the result is absolute genius.

Jump into a game, and you’ll be prompted to go and meet up with the rest of the group. Like Burnout Paradise, events can be anything from races, to speed tests, to acrobatic challenges such as jumping off ramps or between roofs. There are even co-op challenges, where you have to reach a team total, such as jump or drift distances.

It isn’t just about the events though, you can earn points for absolutely everything. Being first to the meet-up point gets you points. Taking down your opponents earns you points, and also freezes their score if you get them in the middle of an event. Playing this game online is absolutely filthy, but in a hugely enjoyable way. As good as Burnout Paradise was online, Need for Speed: Most Wanted does everything that its spiritual predecessor did, and it does it a lot better. 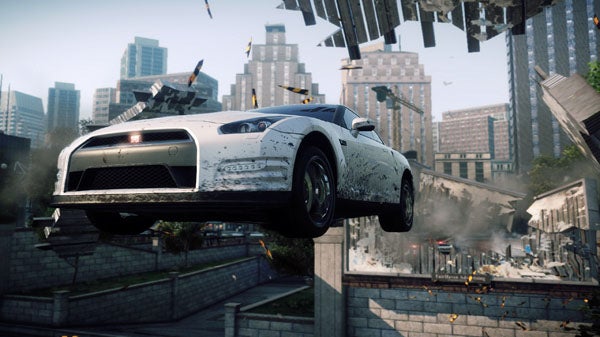 Need for Speed: Most Wanted Verdict

Ultimately, if you’re looking for a driving game, you’ve got two options. The first is Need for Speed: Most Wanted, the second is Forza Horizon. And boy is it a tough call.

We’ve already extolled the virtues of Forza, and in comparison, it’s a real, real shame that Most Wanted’s single player is so ordinary. The game itself is enjoyable to play, but it’s hard to get away from the few, mostly cop-based niggles that can make it so infuriating.

That said, the gap between Need for Speed: Most Wanted’s single and multiplayer is astonishing – as average as the single player is, the multiplayer is absolutely outstanding. It’s built on a tried and tested framework, but Criterion has put real care and thought into the changes it’s made. The result is – for our money – a multiplayer experience that is bettered by none on console or PC, certainly the most fun we’ve had in a long time.