Introduction
The iPhone 5 launch brought with it a brand new version of the iOS software. iOS 6 takes over from iOS 5.1.1, the first big update in around a year. It’ll power iPads, iPhones and iPod touches, but in a world where Windows Phone 8 is about to launch and Google just got rid of a load of problems with Android 4.1 Jelly Bean. Has Apple done enough to keep up?

iOS 6 Maps
The most dramatic move Apple has made with iOS 6 is in dumping the Google Maps-powered Maps app, replacing it with its own mapping system. Could it be fuelled by the heating up of the already forest fire-like rivalry between Apple and Google? Perhaps, and in making its own solution from the ground up, Apple could be stepping into a giant cow pat.

Loading up the iOS 6 Maps app for the first time in Central London, first impressions are pretty good. The look of the standard view maps is more carefully styled than the often prosaic-looking Google alternative, and it makes key local attractions more clearly-visible than the old app. 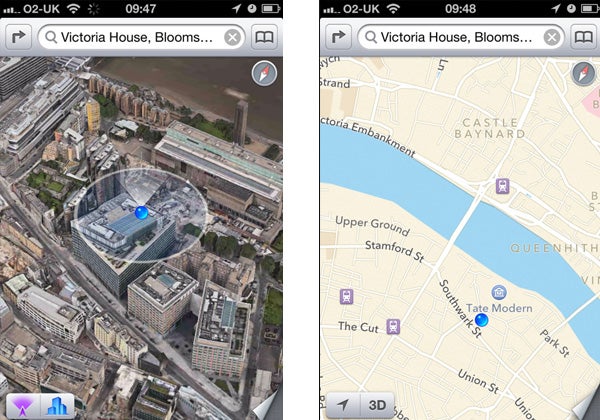 What has been much more of a draw in the lead-up to the iOS release is the new fancy 3D graphics in the new app. This takes over from the flat satellite view of its predecessor, and adds to it land contours and even separate building models in cities. It makes Apple Maps look a little like a flight simulator game, and should – in theory at least – make it easier to navigate in a big city, where a flat satellite view can seem like a mush of grey shapes. We don’t walk on rooftops, after all.

However, in use Apple Maps has a way to go. Its journey planner engine seems to be pretty idiosyncratic, generally delivering less reliable results than we’re used to. And there are many reports that some parts of the UK are not yet well-served by Apple’s points of interest database.

Many tech companies release work-in-progress efforts – all the time, in fact – but that the Apple Maps app can feel like a bit of a step back (albeit a pretty one) is a most un-Apple like disappointment. iPhone 4 users don’t get the snazzy 3D mode, either, which feels like a bit of an unnecessary cut.

iOS 6 Facebook integration
If Apple Maps has more than a hint of Apple ego to it, the improved social network integration in iOS 6 is quite the opposite. It amounts to an opening-up of the Apple system, even if the safe door’s only cracked open enough to let a thin sliver of light through. 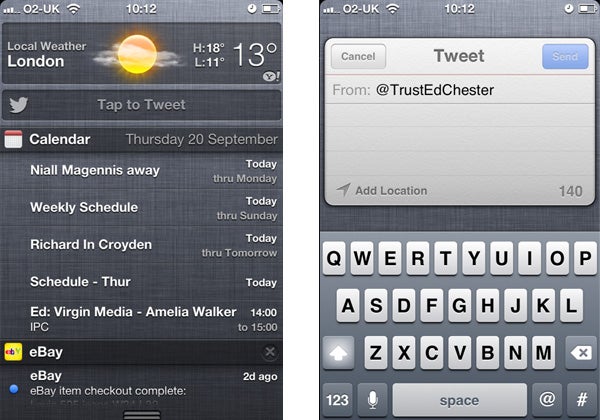 Facebook and Twitter are the two social networks that have been meshed into iOS 6, and they have been jammed into some of the system’s core bits. Most usefully, there’s a status posting box in the drag-down notifications bar. While it can leave the bar looking in an Android-like state of busyness once you’ve plugged a few apps in, it’ll come in handy for Twitter addicts in particular.

The uploading part of the Photo Gallery app has been redesigned too. Rather than a dull-looking list of options, Apple has instated a colourful panel of icons for various ports of call including – you guessed it – Facebook and Twitter. 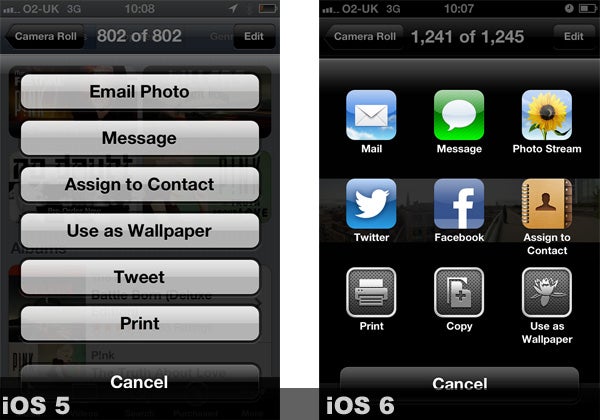 Neither of these feels like a particularly drastic change, though. It’s simply jamming Facebook and Twitter into parts of the system that existed beforehand, making us wonder why it took Apple so long.

iOS 6 Siri
Continuing the theme of iterative updates, the Hal-9000-a-like virtual buddy Siri has been given an overhaul. It’ll now let you check up information on things such as sports fixtures plus movie information and reviews. 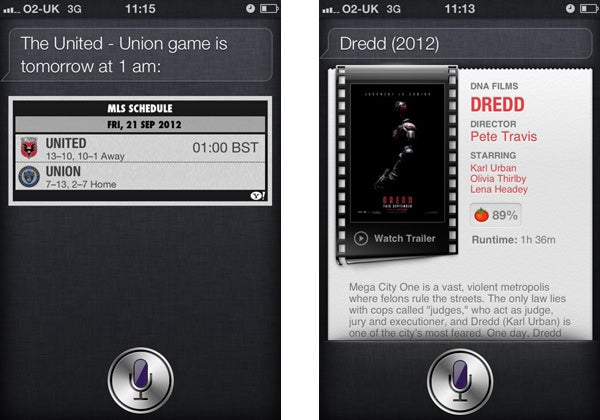 You could ask Siri these sorts of questions before, but it would invariably boot you out into the Safari browser, the equivalent of getting your Mum to do your homework for you. Now, though, it all stays within Siri. 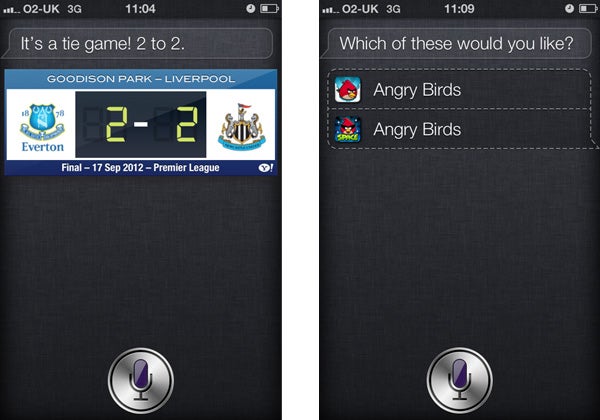 You can now launch apps from Siri too

The info that’s available in the UK seems to be pretty limited, though. Film information fared well enough, as there’s less of a UK-US disconnect there, but when looking for football details, anything less high-profile than Premiership football led to answers relating to US teams and sports. When asking Siri about Leeds United’s latest goings-on, it came back with some nonsense about the MLS league – not what we were after at all. Siri is getting better though, slowly.

iOS 6 Passbook
Another potentially-exciting aspect of iOS 6 that seems to be hampered by being a UK-er is Passbook. This is Apple’s main excuse for not including iPhone 5 NFC connectivity as it claims Passbook can do everything you need. We’re not so sure. 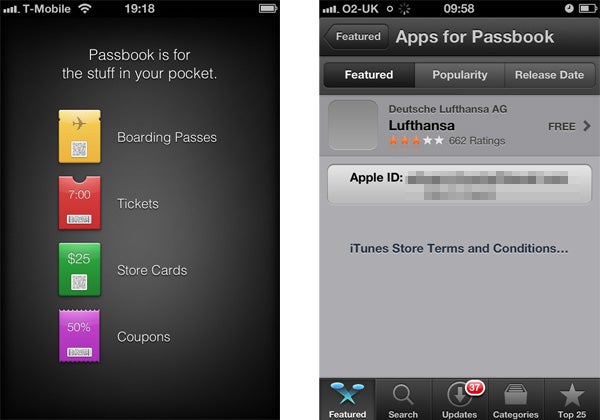 Passbook is a place to keep things like digital cinema tickets, train tickets, plane boarding passes and so on. It works like a virtual documents folder, and requires you to plug-in apps relating to the companies on the other end, apps downloaded from the App Store.

At the time of writing, only the Lufthansa app turned up from an App Store search. So right now, unless you’re a major traveller and a big fan of that German airline, it’s not particularly useful. We expect this feature will grow quickly in the coming weeks and months, but for now it doesn’t have us feeling confident in Apple’s decision to leave out a proper wireless payments standard. Whatever Apple says, Passbook isn’t really a replacement for such tech.

iOS 6 Camera and Panorama
From a UK perspective, it’s starting to sound like we’re not getting a particularly good deal with iOS 6, an update that’s supposedly pretty major. However, look at the less location-centric updates and we do get a few worthwhile goodies. 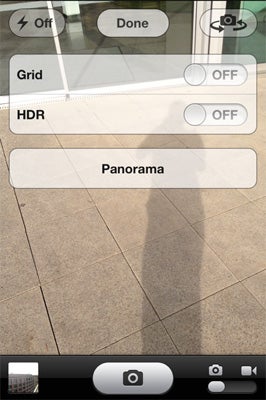 The best of the lot, arguably, is the new camera panorama mode. This sits innocuously in the Settings menu of the standard camera app, and takes a high-resolution, roughly-3MB wide shot of your surroundings. In typical Apple style, it’s dead easy to use – you just slowly turn your iPhone, trying to keep the guide line level.

Quality is impressive, with good management of changes in light intensity. However, as with most panorama apps, it struggles with some straight lines, as you can see in the distortion of the handrail below. As you can see, there’s little-to-no distortion elsewhere, so we can’t have been jiggling the handset about all that much.

It’s disappointment time again for iPhone 4 users, though, because Panorama doesn’t feature in that model.

iOS 6 iTunes and App Store
Not all of iOS 6’s new bits are functional changes. Some are aesthetic. The colour scheme of many part of the OS have changed, for example. The light blues and greys of menus have been switched for moodier-looking dark greys and blacks. Apple is donning the Ray-Bans and doing its best to look cool, and while it’s something that may look a little odd to you for about 22 minutes, we imagine most people will have forgotten that there was even a change within a week or two. 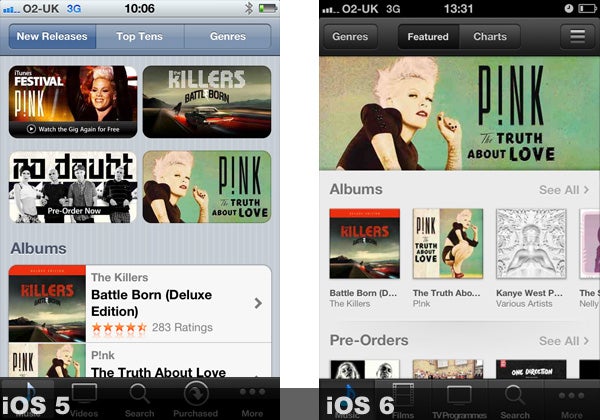 Apple has also made some more significant changes to the looks of its digital storefronts. iTunes’s frontend is a lot more flash than it used to be, with an interface that’s actually closer to the Spotify app’s than the rather staid approach iTunes used to have. It’s more visually-driven now, letting album covers themselves act as part of the visual architecture of the portal, rather than hemming everything in with drawn interface lines.

It’s doesn’t fundamentally change how iTunes work, but it does make it look more modern.

iOS 6 Browser and email
Visual tweaks blend with functional benefits in the Safari browser’s updates. Apple has added a full-screen landscape mode in iOS 6, letting you get rid of all space-consuming UI elements with a new button lodged in the main nav menu.

You can also save full web pages for offline viewing, which will come in handy if you travel underground on the way to work, or live in an area with poor 3G reception. As with the long-time-coming social network updates, these feel like features that could have been implemented a while back, and are already available through third-party apps. 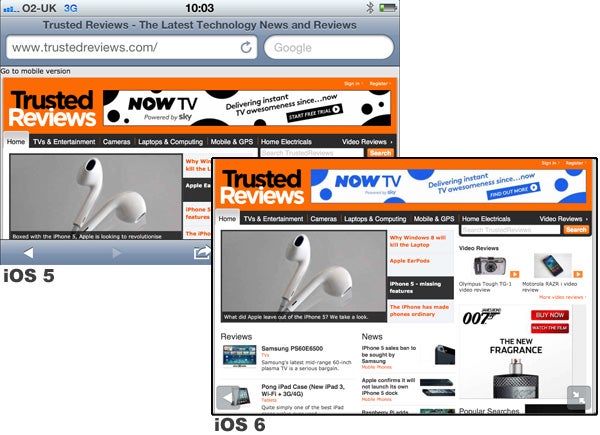 The email app gets a few similarly-enriching tweaks. You can now label email contacts as “VIP”, which will direct them into a special, important inbox. It’s email streamlining, the Apple way. 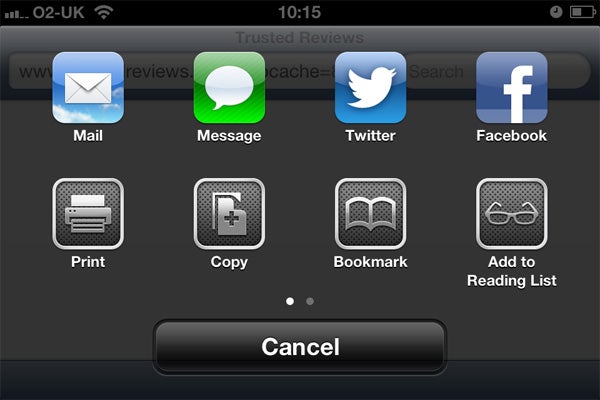 iOS 6 Game Center
More interesting, but also more likely to get overlooked, are the iOS 6 improvements made to Game Center, Apple’s take on Xbox Live. It looks more-or-less the same, but you can now send game challenges to your friends.

Once they beat them, you’ll be notified, and you can send your own personal, taunting messages along with each challenge. We have a feeling this may not catch on all that well with many who would actually have good fun using it, but it’s a neat addition that should add an extra shot of adrenaline to the already-vibrant iPhone games scene. 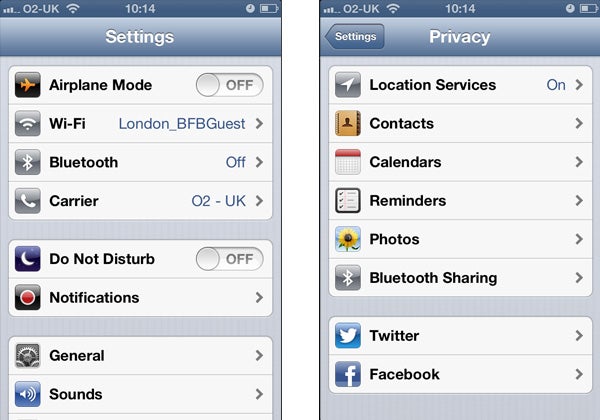 This will come in particularly handy for those who don’t want the horrible chorus of the alarm clock to be followed up by the bleating coda of the iPhone email notification sound. Blessed be.

iOS 6 Performance
So far, we’ve mostly looked at the new features of iOS 6 and whether they’re worth bothering with, but perhaps the most crucial thing is that it doesn’t ruin the basic iOS experience. It doesn’t add anything too flashy – no widgets, no added home screen customisation – but it does run quickly enough on an iPhone 4S, and while some slight slow-down does appear to have been introduced to the iPhone 4, it’s not going to make you run out to buy an iPhone 5. Apple’s marketing is there to do that.

iOS 6 Verdict
Those who think that iOS is due a change, one that will start to bring in the customisation features offered by Android and the upcoming Windows Phone 8 platform that will feature on the Nokia Lumia 920, may be disappointed by iOS 6. Many of the best bits of iOS are ones you won’t necessarily notice instantly, and when you do they’ll simply implicate themselves into your day-to-day life to the extent that you’ll soon forget they’re “new” at all.

Some of the changes, such as Apple Maps and Passbook, feel a little limited in the UK at the moment, and iPhone 4 users will undoubtedly be disappointed at the number of features they miss out on. iOS 6 doesn’t spoil iOS, but it’ll be a few weeks or months before its benefits become more apparent, as features develop and a few niggles are squished.