What is the Samsung Galaxy Note 8.0?

Samsung is infamous for making tablets and phones in just about every size. But the Samsung Galaxy Note 8.0 is one that makes sense. With an 8-inch screen it’s the size of a large notepad, it comes with a stylus that turns it into a handy digital notepad and tablet in one. But does it do enough to justify its £350 price tag? 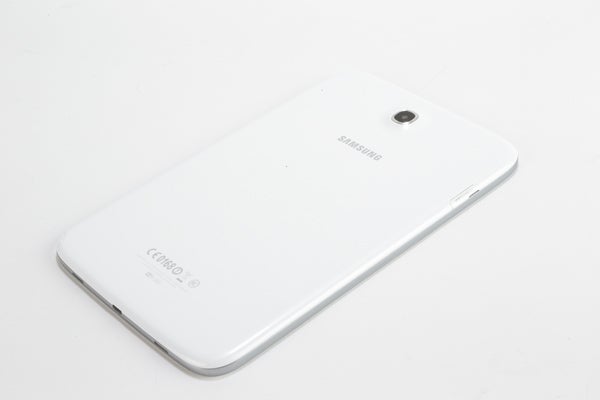 One of the most-criticised elements of the top-end Galaxy devices, such as the Galaxy S4, is the ‘plastic-fantastic’ design. The Galaxy Note 8.0 is no exception thanks to its white plastic rear, and it doesn’t feel fancy. Not at all.

The back is non-removable, so you have no access to the battery, and there is a tiny bit of give to some parts of the back panel. Part of the left side clicks disconcertingly when put under pressure, too. In other words, it has all the disadvantages of a unibody design, like the iPad mini or HTC One, without the sturdy, quality feel. Some might even say it feels ‘toy-like’.

It’s not all doom and gloom, however. One benefit is the cheerily curvy profile the plastic design allows, and at 338g and 8mm thick the Galaxy Note 8.0 is the kind of tablet you can hold comfortably in one hand without complaint.

Likewise, while the thick bezel is a departure from slimmer rivals, it makes the Galaxy Note 8.0 easier to hold – a useful thing considering the ‘digital notepad’ focus. 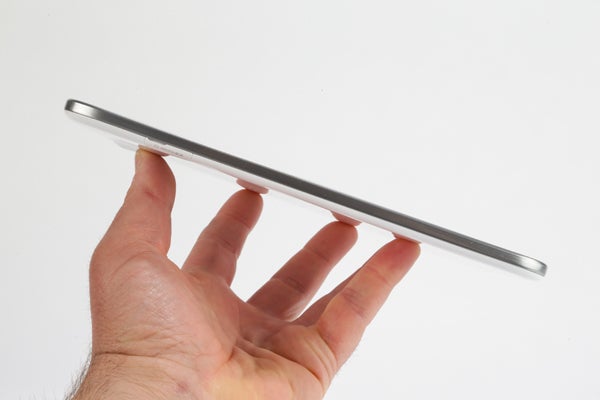 There’s even space for stereo speakers, which are impressively loud even if the actual sound is a little forced and lacking fidelity.

The Samsung Galaxy Note 8.0 has (yes, you guessed it) an 8-inch screen. It’s a PLS display, similar to the IPS kind used in Apple’s iPads, and most higher-end tablets. 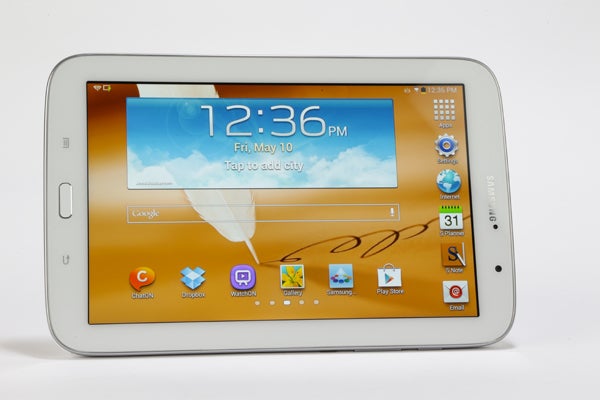 If this was a cheaper tablet, the Galaxy Note 8.0’s display would seem pretty good. Contrast, colour and top brightness are all commendable, with rich images that have none of that washed-out quality that afflicts lower-quality screens.

However, it’s still left seemingly distinctly last-gen because of one crucial aspect – resolution. It has a 1,280 x 800 pixel display, the same resolution seen in the smaller, much cheaper Google Nexus 7. 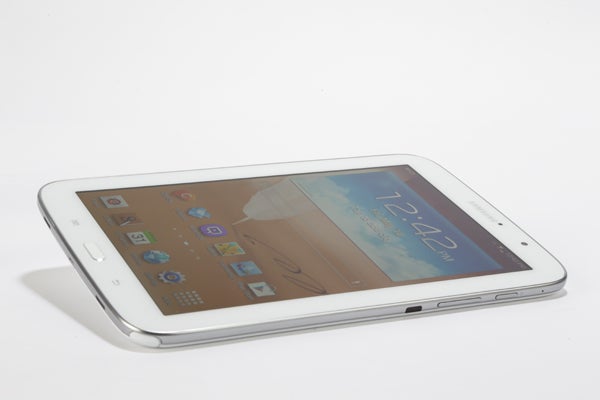 This means the Samsung Galaxy Note 8.0 pixel density is 189ppi. That’s much better than we put up with the first generations of iPads and Android tablets, but now that we’re used to seeing ultra-high resolution screens in tablets, it’s far too easy to notice the pixelated edges of characters.

This is a good screen, but it doesn’t feel like a current one – something that will become all the more apparent once Apple reveals the iPad mini 2 later this year.  Given the Galaxy Note 8.0 costs only slightly less than a full-size, retina iPad, which has a gorgeous screen, this is a big problem.

The Samsung Galaxy Note 8.0 runs a customised version of Android version 4.1.2, which is not the latest version of the OS and is about to become even more behind-the-times thanks to the upcoming release of Android Key Lime Pie. 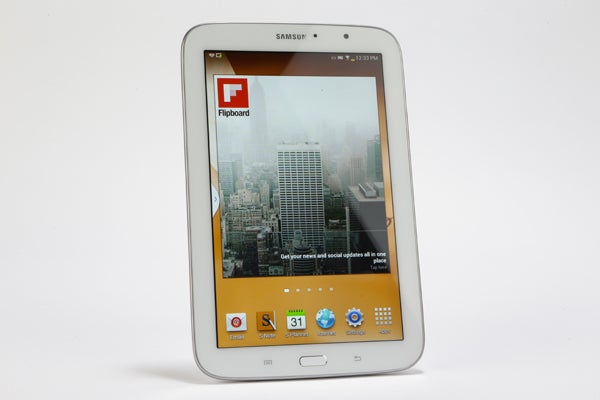 The software differences are muted a little by the Samsung unifying TouchWiz interface that sits on top, though. This is a feature-rich custom skin, but is not the best-looking one around. Its colourful and cheery visual style can look a little cheap, which doesn’t help the Note 8.0’s claim as a serious device when the body feels a little toy-like too.

As this is an Android device, though, you’re free to customise the look of the system a fair bit, with widgets on the home screen, custom wallpapers and – taking it a step further – even third-party launcher apps that paste a new interface over TouchWiz.

TouchWiz does provide a few great features, too. Our favourite is Multi-Screen. This brings true multi-tasking to the Galaxy Note 8.0, letting you run two apps at the same time, on one screen. You simply drag the apps you want from a side-bar accessed (or hidden) by holding down on the ‘back’ soft key. 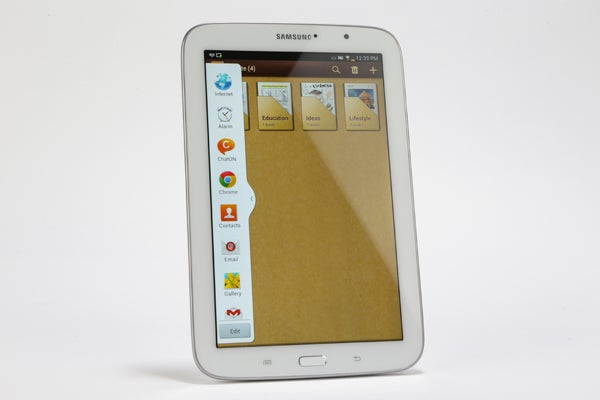 Other Samsung extras are of more questionable use – such as being able to take a screenshot by swiping the side of your palm from left to right on the screen, or pausing a media file by putting your whole palm on the screen. Some may like them, but they’re gimmicks – not a reason to buy the Samsung Galaxy Note 8.0.