For TV buyers interested in a big-screen display at a relatively affordable price, the Hisense 65U8QFTUK is worth a look. Its upscaling is solid, its HDR performance can impress, and it offers plenty of value – but its larger size highlights several picture issues. Similar-sized efforts from bigger brands are available around the same price, so perhaps avid film fans with a 4K HDR library should consider other options.

The Hisense 65U8QFTUK is at the top of Hisense’s 2020 TV range, and it looks to provide a value-added and simple smart experience compared to the big guns in the market.

Having looked at the 55-inch model, we’ve lassoed Hisense’s 65-inch flagship ahead of the 2021 TV range being released. While we liked the 55-inch model enough to give it a recommended badge, there were niggling issues about its performance.

With prices now below the £1000 mark, the 65U8QFTUK has now moved into that sweet spot of a big-screen TV at a tempting price. So, is it a case of more of the same from this Hisense model? Well, yes and also no.

Where to start with this larger model? Build quality is just as solid as the 55-inch set, the bezel is slim enough to have minimal impact on the screen, and the V-shaped pedestal has a bigger footprint – even more so at this size. 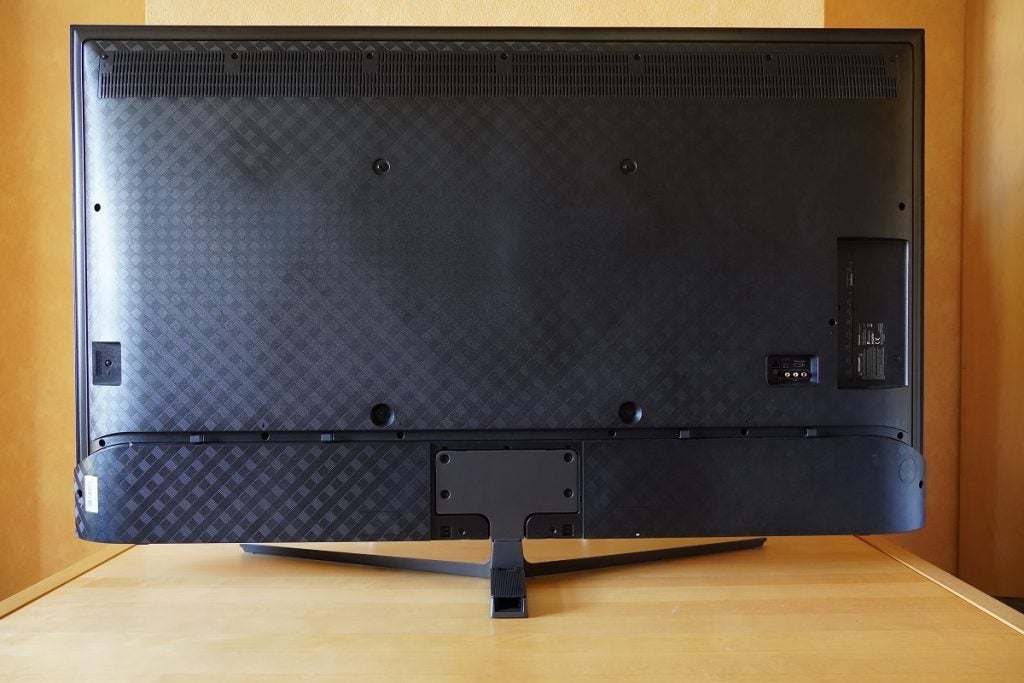 The shape of the stand isn’t conducive to placing a soundbar in front of the unit, unless it’s a compact one. Attaching the stand is easy – simply a case of uniting the three pieces together and screwing the top panel into the TV. There’s a slight give; but the stand isn’t one for swivelling to and fro. 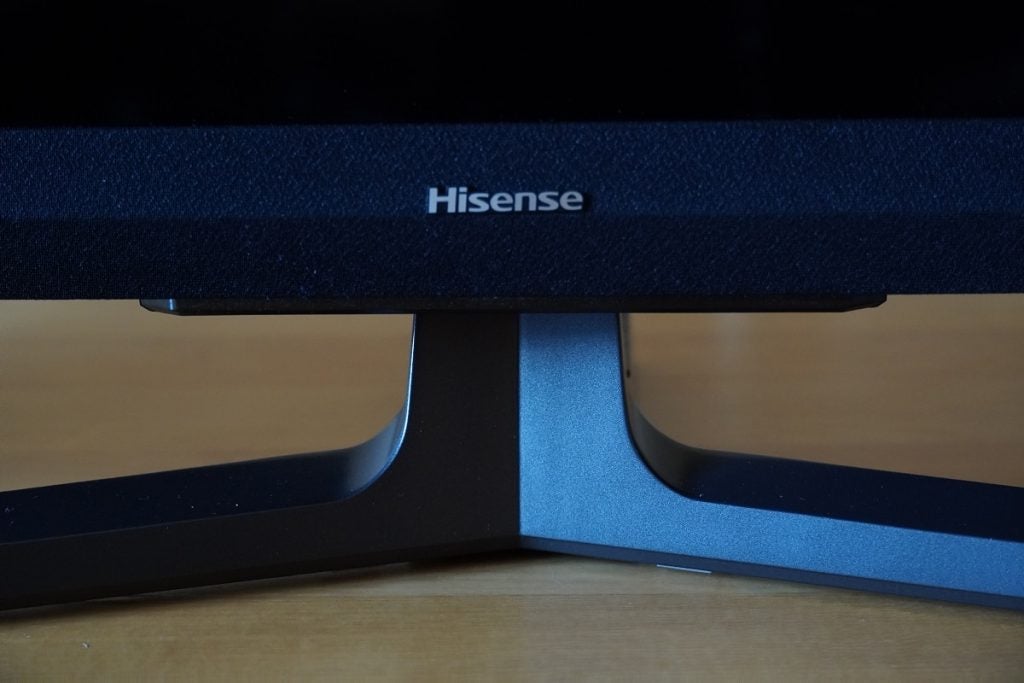 The rear panel sports a checkerboard design – I’ve no idea why, but it looks neat – and there’s a cable clutter feature for tidying up the rear area. There’s space for probably two, potentially three cables, to be ferried through the back of the stand. It’s neat and tidy, which sums up the overall aesthetic. 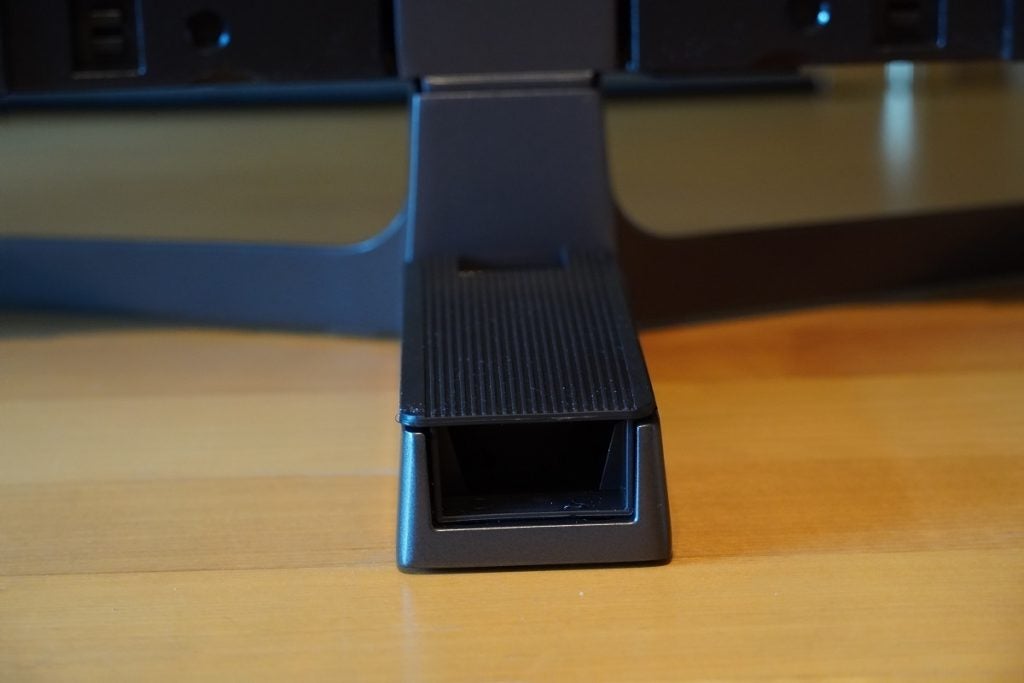 The remote isn’t a favourite of mine. Slim with raised, clickable buttons, I find the layout too busy. If you have big digits like myself you’ll often jab at multiple buttons. Hotkeys for Netflix, Prime Video, Rakuten TV, YouTube and Freeview Play are present, as well as microphone button for activating a voice assistant. 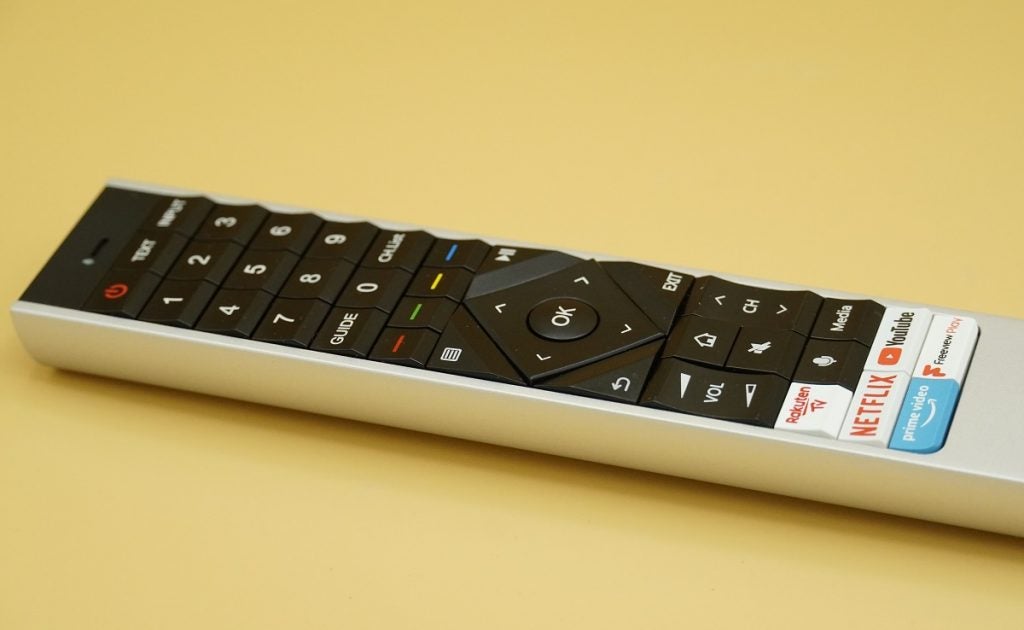 Hisense 65U8QFTUK features – None of the new headline features, but these arguably won’t matter to most

Hisense hasn’t pursued any of the new-fangled TV features that have come to prominence recently, so there’s no VRR, ALLM, HFR or eARC; no Filmmaker mode, no Dolby Vision IQ or Netflix Calibrated mode.

If any of the above are what you’re after then have a look at our best 4K TVs. The Hisense’s simplicity will be more suited to casual TV users. 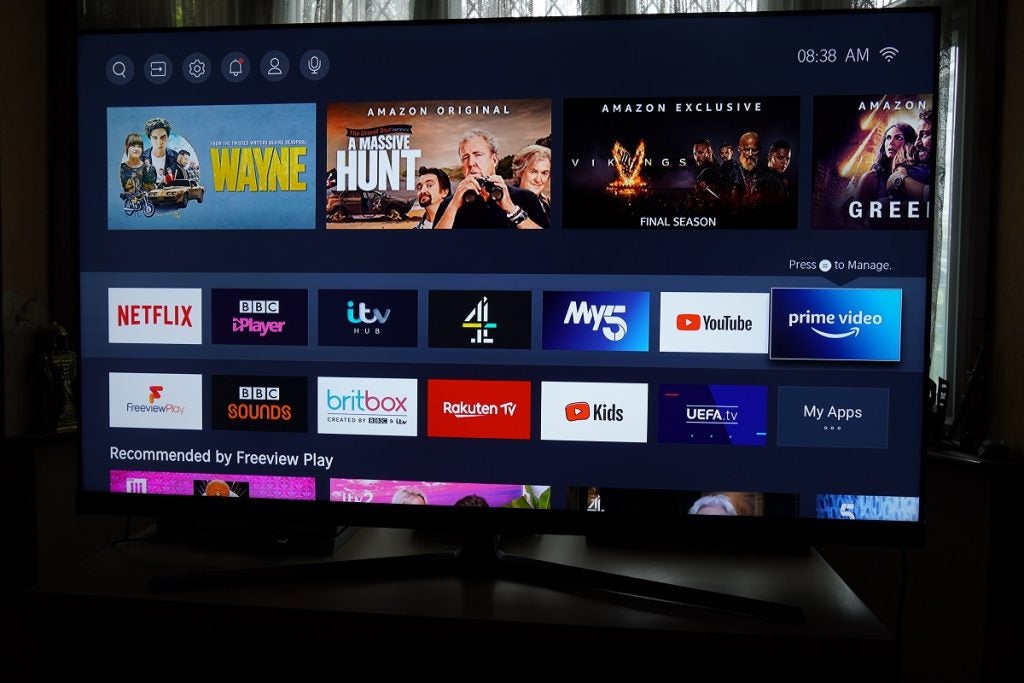 That’s evident in the VIDAA U 4.0 smart portal, which is about as plain and simple a smart TV interface as you can find. All the main apps are covered, with Netflix occupying prime spot and followed by the likes of Prime Video, YouTube, Rakuten TV, BritBox as well as the various UK catch-up and on-demand apps with its Freeview Play integration.

BBC Sounds and UEFA TV have been added, while the likes of Apple TV, Disney Plus, Spotify and Tidal remain unsupported.

There are added smarts in Chromecast support and built-in Alexa. Although there’s none of the new advanced gaming features, the 65U8QFTUK marks itself out as an excellent set for gamers with older consoles. I recorded latency at 1080p/60Hz at 14.1ms, and you can feel the smoothness in the inputs for a game, such as Project Cars 3, which requires precise responses. 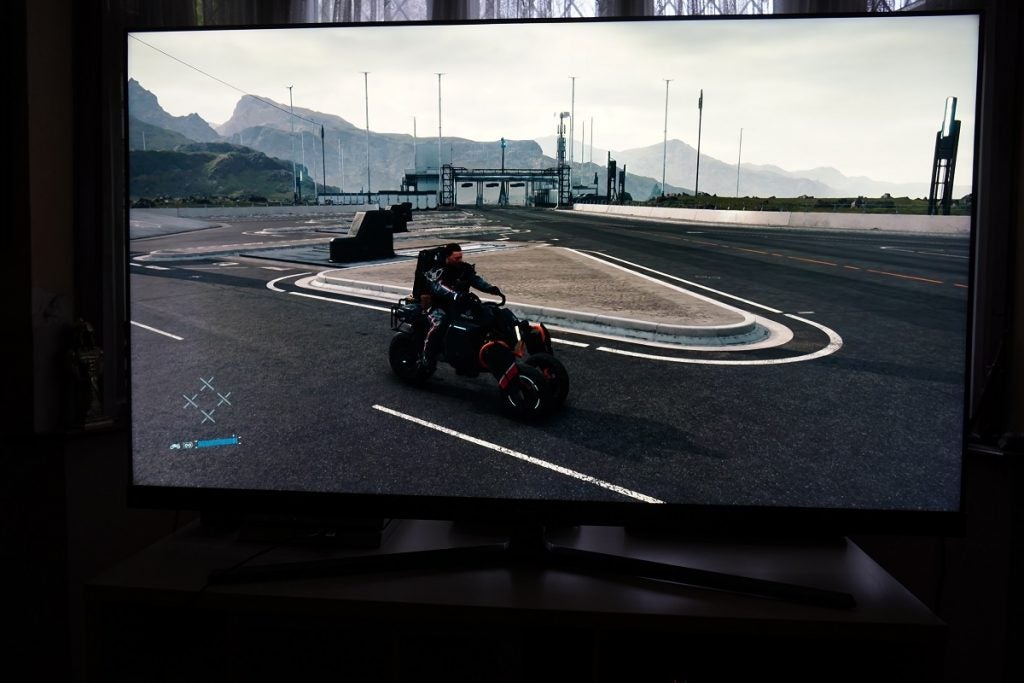 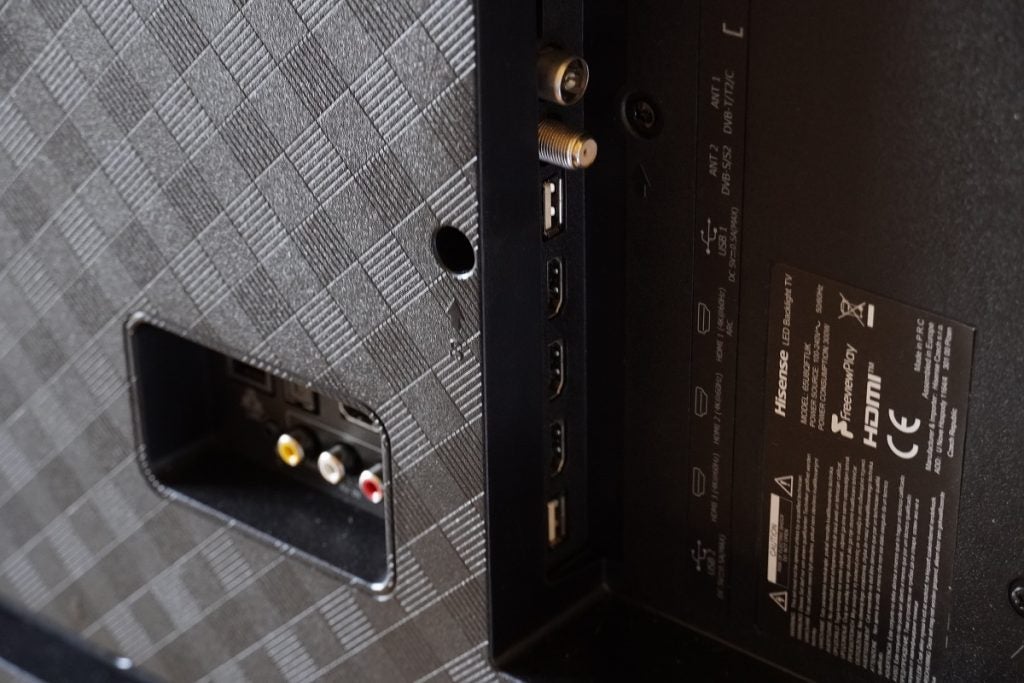 When I reviewed the 55U8QFT it had a few issues, several of which have been ironed out since launch. However, the bigger screen highlights some remaining niggles and shines a light on some that I hadn’t spotted before.

One such issue is the 65U8QF’s backlight performance. Despite a VA panel and full-array local dimming system, it’s imprecise when dealt small, bright objects. The beginning of Predator (4K Blu-ray HDR10) opens on a shot of outer space, and the halos around the stars add a cloudy aspect to the image. In a bright room it’s less noticeable, but in the dark it stands out more.

There’s blooming off-axis and, disappointingly, a slight shift in seating is all that’s needed for it to manifest. Also a problem is a green tint to shadows. You can see a green emphasis on the wall behind Peter Parker in Spider-Man: Far From Home in the Dolby Vision Dark profile that isn’t apparent in the Dolby Vision Bright mode – and this issue ranges from slight to more visible, depending on the content. 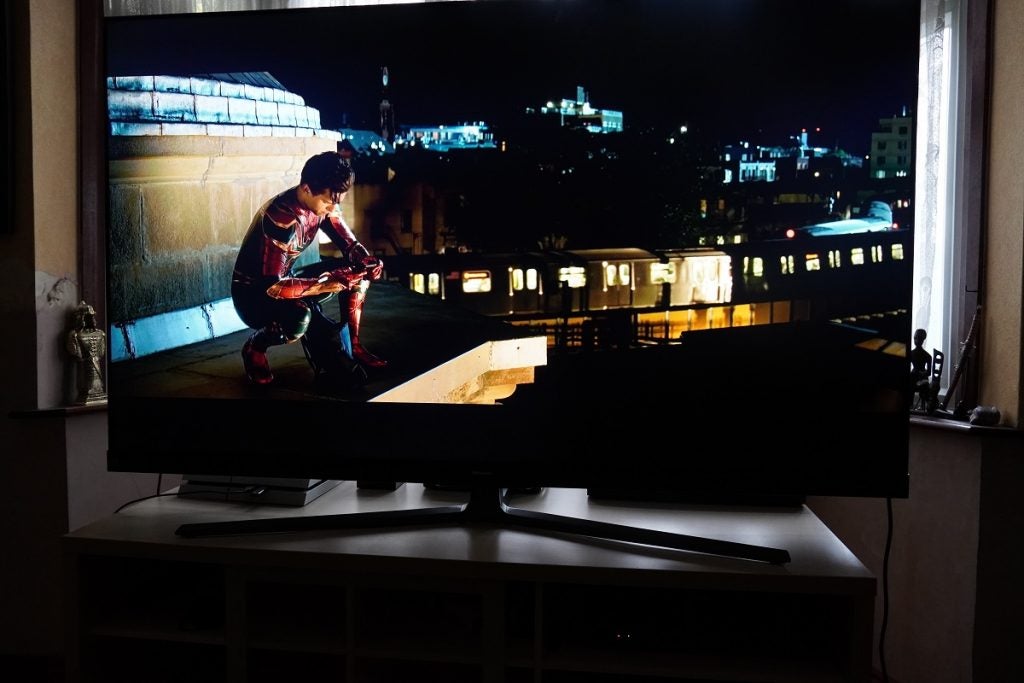 Then there’s the red/green blur that occurs around faces and bodies with quick movement. When Dani Reyes is held back as Grace battles the Rev-9  in Terminator: Dark Fate, there’s an odd red outline to her face. It crops up across a number of films, and once you see it, it becomes rather distracting.

While those issues dilute the 65U8QF’s potential, I’m still on the favourable side since this TV is capable of delivering impressive images. Despite the blooming, black levels are often solid and deep, elevating the contrast between the bright and dark aspects of an image. 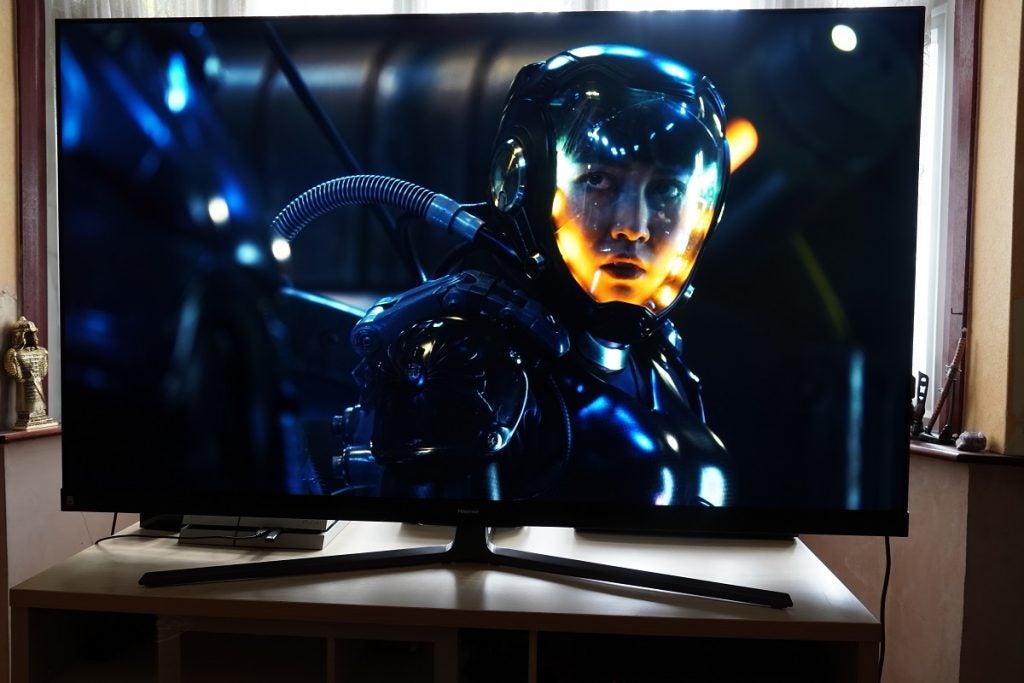 The Hisense’s Ultra Smooth Motion feature is improved, mirroring the gains found in the step-down 65U7QFTUK. It won’t bother class-leaders Sony and Panasonic, but it is done with greater confidence. Streaming Everton vs Manchester City on Prime Video, while an element of judder remains, it’s watchable. There’s little difference between the Smooth, Standard and Clear options, and I’m not sure what the Film option achieves since all it does is add stutter.

The 65U8QFTUK proves to be a solid upscaler of sub-4K content, but at this size, a 1080p image stretched to 65 inches reveals a deficit in clarity and sharpness. The Panasonic 65HZ1000 OLED was similar – and despite the 65U8QF boasting AI optimisation with its Hi-View chip – the results aren’t as good as the best TVs on the market.

However, I doubt many casual viewers will be upset by the results. Standard Definition SDR content displays an unsurprising lack of detail, with noisy-looking facial features and a general lack of sharpness. But colours are strongly portrayed, so while you ought not to make a regular habit of watching SD content, you won’t have to avert your eyes… too much. 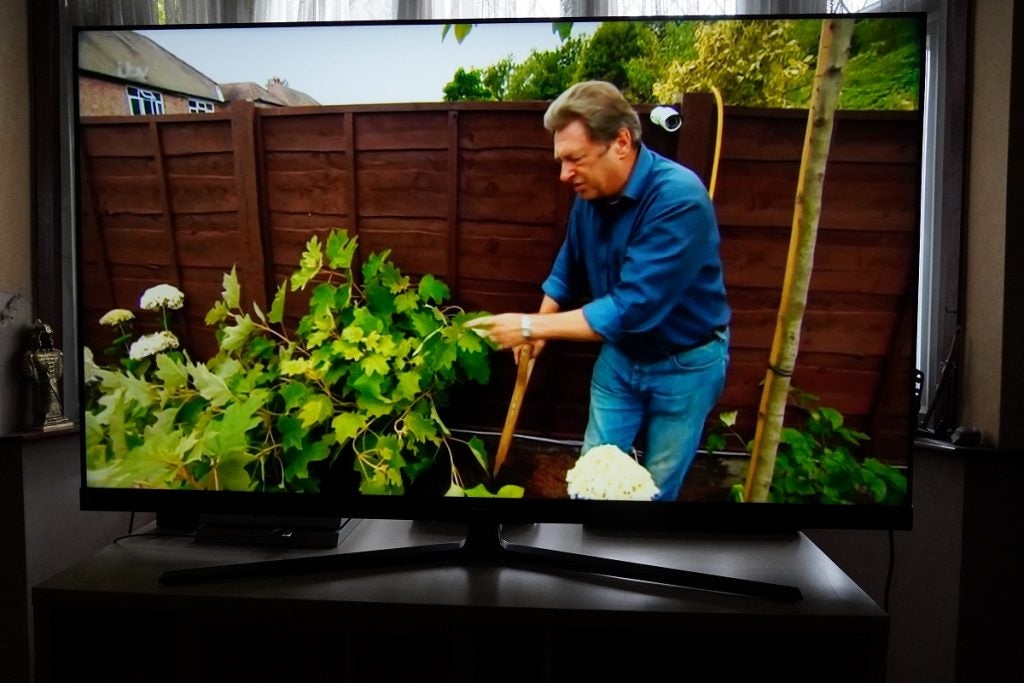 HD SDR is a step up in all regards. There’s the same strength to colours, but they’re more accurate, while the image is sharper, clearer and more detailed. There is, again, a lack of sharpness and a softness that’s most obvious in faces, but skin tones appear on point and it’s just an enjoyable image overall.

The main HDR formats are repped in HDR10, HLG, HDR10+ and Dolby Vision. Hisense says the 65U8QFTUK can hit a peak brightness of 1000 nits – and it can certainly go bright. HDR content is given a punchy, gleaming, near three-dimensional presentation at times. 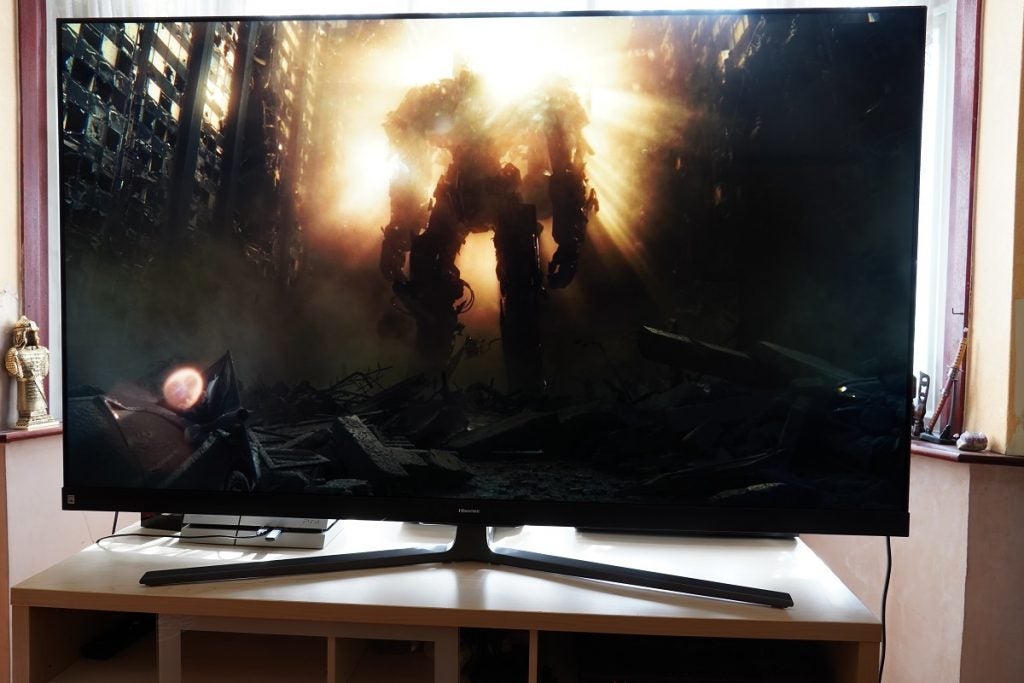 Watching Pacific Rim (again) via the Panasonic UB820 4K player, the Hisense delivers on the film’s expressive colours and sense of scale. As Jaeger and Kaiju go fist-to-fist, there’s an intensity to colours and a good degree of accuracy, too. The image isn’t as cinematic as the Panasonic TX-65HX940, but it’s striking nonetheless. 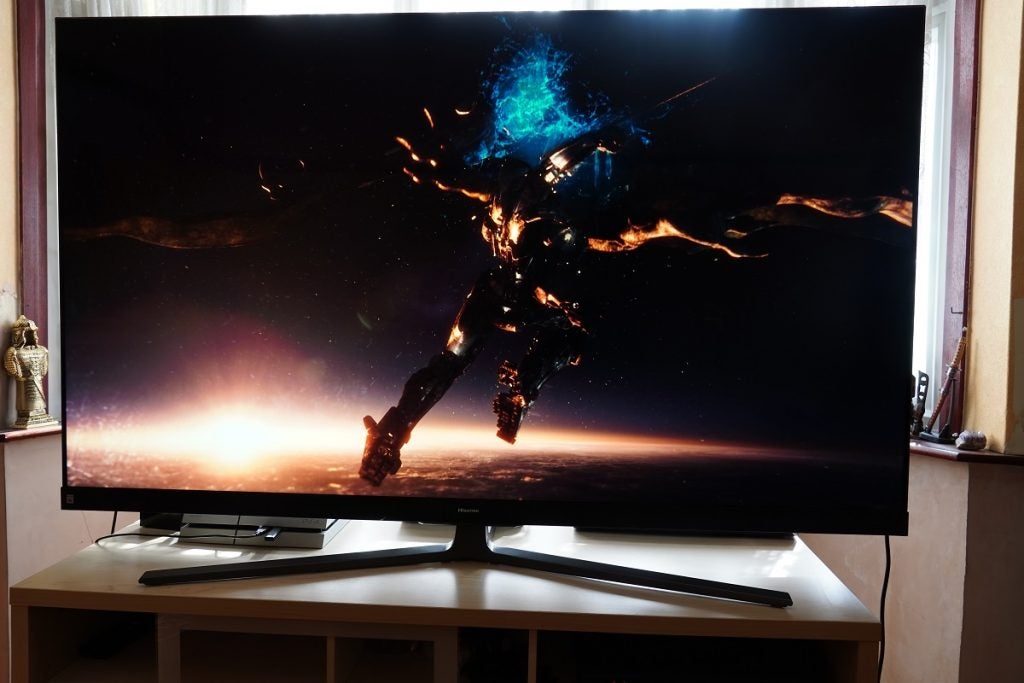 I’m not as convinced by the set’s Dolby Vision Bright and Dark profiles. The former leads to less potent black levels, while the latter emphasises blacks at the expense of detail. There’s a Dolby Vision custom option, but it’s always struck me as odd considering Dolby Vision should display content as the filmmaker intended.

Still, the 65U8QFTUK feels best suited when given Dolby Vision HDR content with the black levels of the moon landing in First Man, again, impressing with their depth. 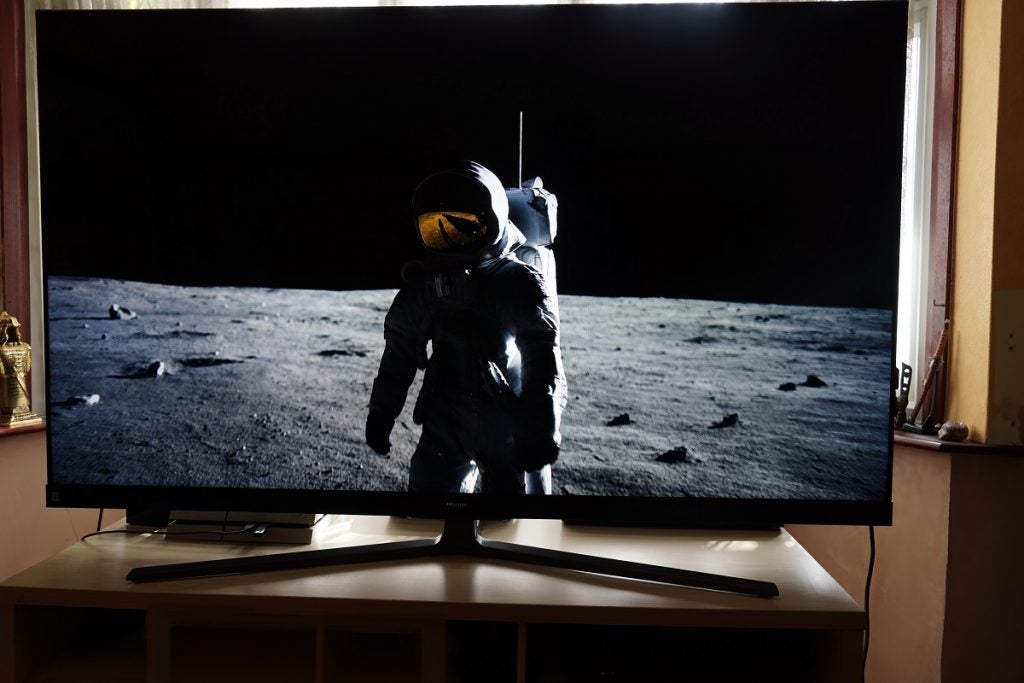 I’m less confident with its HDR10+ performance, however. A HDR10+ stream of 1917 on Prime Video looks close to – but less refined – than its disc-based counterpart. 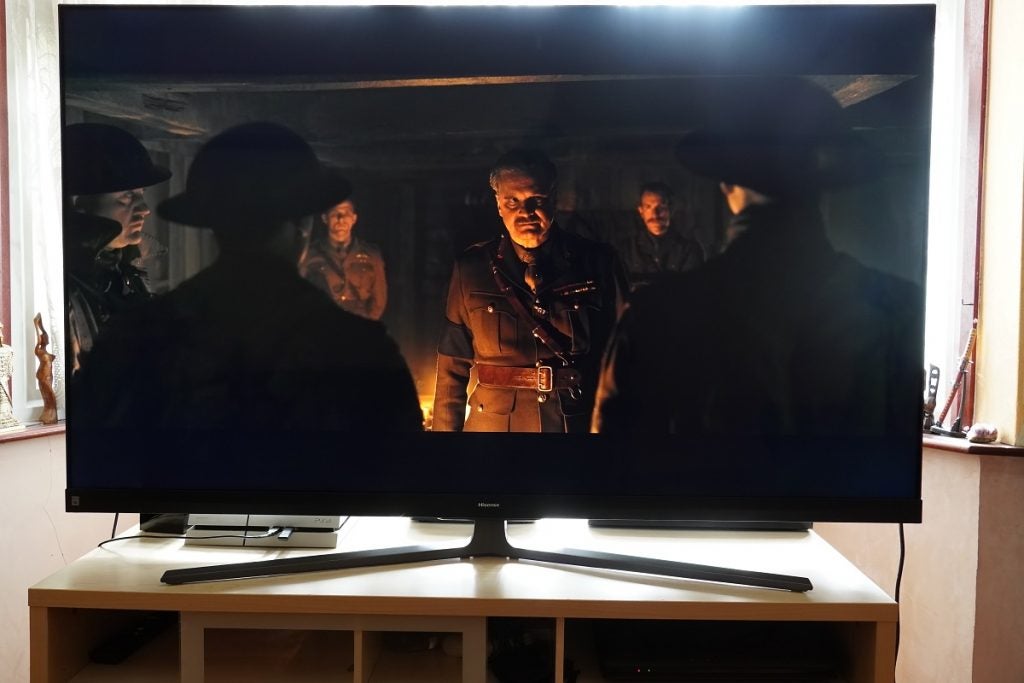 Doctor Sleep wasn’t quite tip-top in terms of black levels with what appeared to be some dirty screen effects during the sequence where Rose the Hat searches for Abra, and the same can be said for The Invisible Man. Alita: Battle Angel fared better, so it would seem it varies film to film. 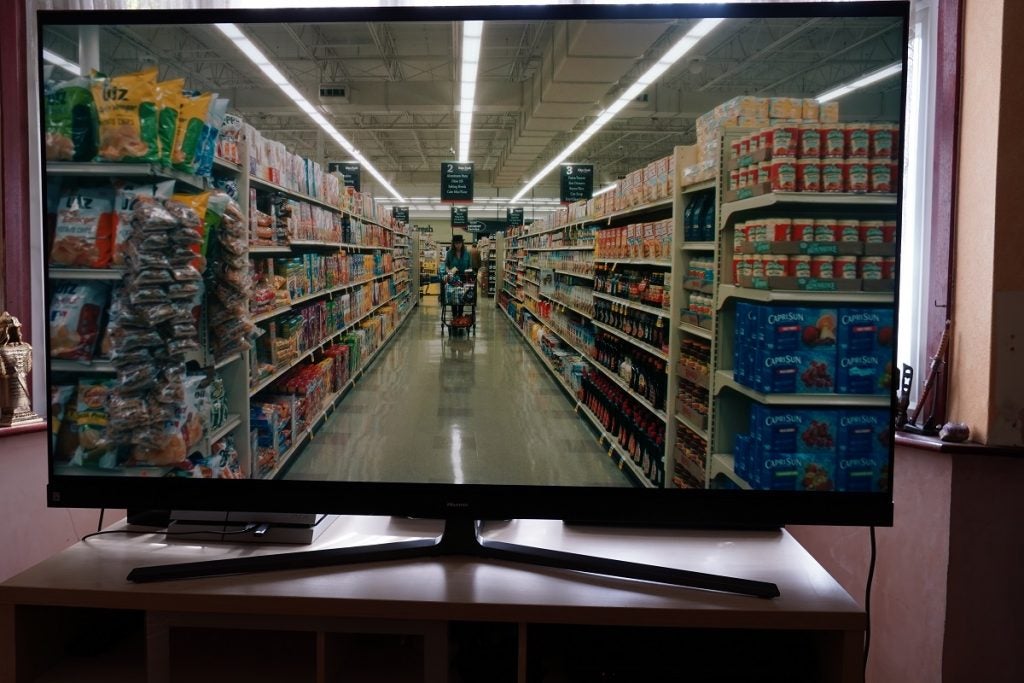 The 65U8QF packs 2 x 10W front-firing system tuned by JBL – and I can’t help feel that’s disappointing for a TV of this size.

The delivery in Standard mode is deliberately flat and balanced, and while that works for everyday TV viewing, films demand more dynamism. The Theatre setting offers a bigger sound, but it isn’t one that escapes the confines of the TV. The setting also gives dialogue a slight boxed-in feel. 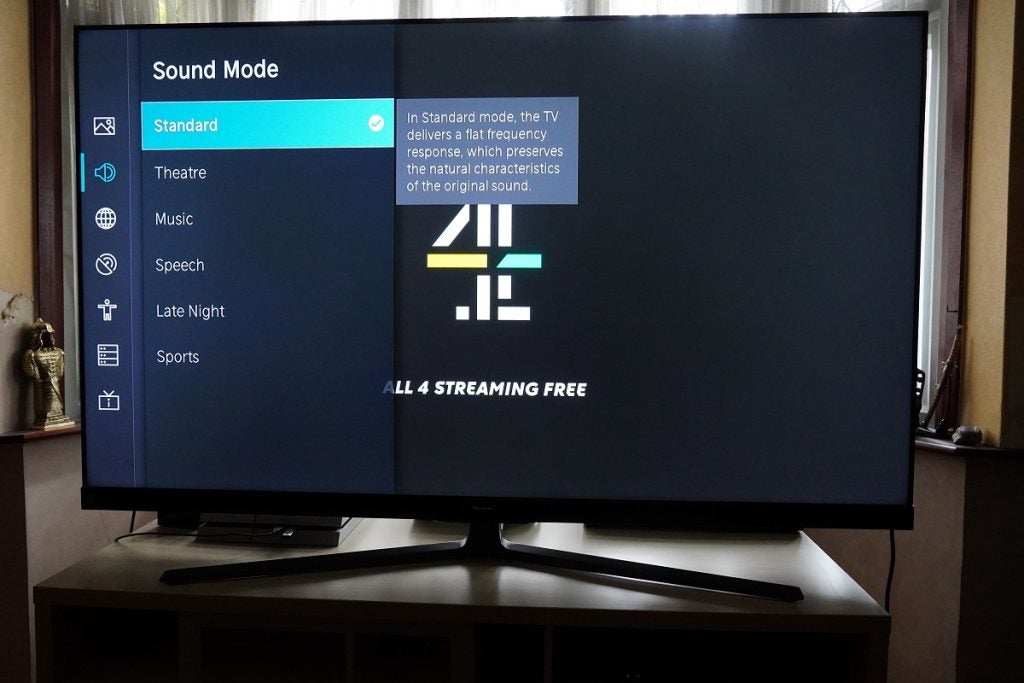 Watching football with the Sports mode, it comes across like an amorphous blob, the fake crowd noise not helping the overall flatness to the point where it’s difficult to decipher everything the commentators are saying. Their voices rarely sit above the crowd noises. It does, at least, refrain from harsh or shrill tones.

The performance in the 55-inch model doesn’t scale up as well to the 65-inch unit. Although there’s Dolby Atmos support for a more spacious presentation, for a screen of this size a soundbar is a must if the audio is to match the visuals the Hisense 65U8QFTUK can produce.

The 65U8QFTUK loses a half star compared to the 55U8QF – but I remain positive about it. As a big screen for films and TV series there are a few too many issues, and given the 65-inch Samsung Q80T is hovering around the £1000 mark, it’s just too good an opportunity to miss (although you’ll miss out on Dolby Vision).

For people with less lofty expectations, this screen will likely be an attractive one, especially if you factor in its multi-HDR support. Its SDR performance is satisfying and its HDR performance can be impressive. I’m interested to see what Hisense does with its 2021 TV range.

You should buy the Hisense 65U8QFTUK if…

You should not buy the Hisense 65U8QFTUK if…