Some of the issues with previous Hisense TVs have been smoothed out, and with the right settings this 65-inch set offers colourful and detailed images at an affordable price. Blooming, weak wide angles and average black levels persist, but if you can’t stretch your budget far for premium options then the U7QF comes recommend as a budget focused alternative.

The Hisense U7QF is the step down 4K ULED in Hisense’s 2020 TV range. Like the rest of Hisense’s output there’s an emphasis on performance and affordability, packing multi-HDR formats, a full array local dimming panel and Atmos sound for £799.

Having liked the U8Q well enough – less so the mid-range A7500F – where does the U7QF fit in? Well, after some updates, we’re quite upbeat about the U7QF’s prospects.

The Hisense U7QFTUK (its UK designation) costs £799/€599 for the 65-inch model at the time of review. Head online and you can find it stocked for £849 at Richer Sounds, Currys UK and John Lewis.

Available in 50-, 55- and 65-inch models, the U7Q has an understated appearance. The bezel around the top and sides is thin, met by a discrete silver trim at the bottom. The chassis is made from plastic, and in terms of depth it’s surprisingly slim. The U-shaped central stand is made from aluminium, but it’s sturdy and supports the set well. 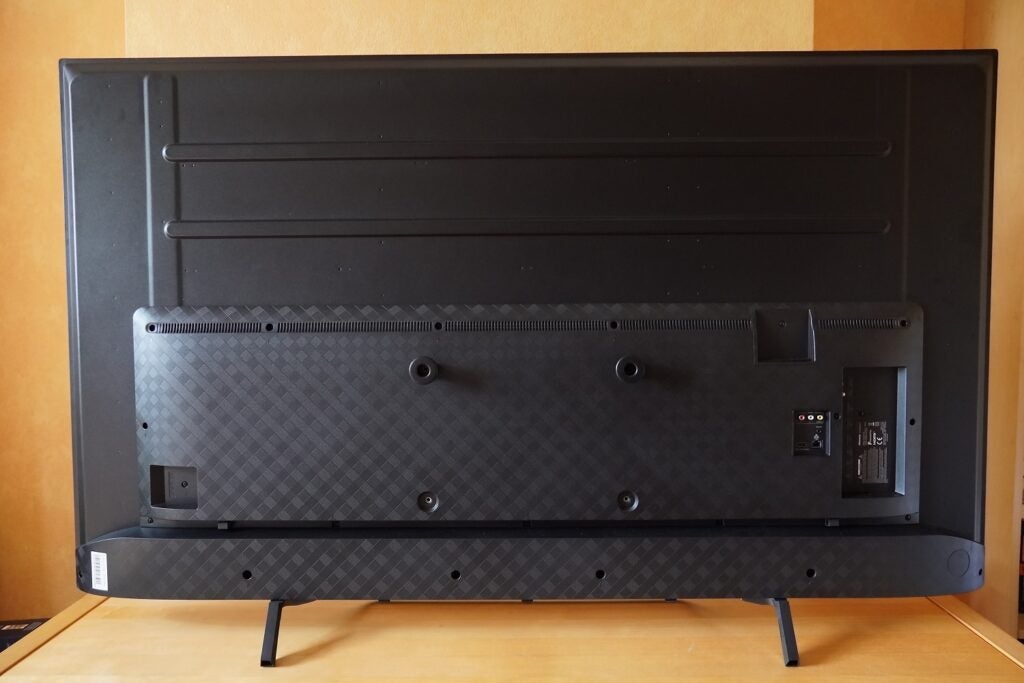 Assembly of the TV is simple, requiring little more than slotting in the stand and tightening the screws. The stand juts out, and I can imagine would make placement of a soundbar awkward for smaller tables and stands. To wall-mount the set you’ll need a compatible VESA wall-mount.

There’s a cable system that you can funnel through to the back of each foot, but it’s only big enough for one cable each. The remote is the black version of the one included with the U8Q. While it looks premium, it’s very compact and buttons are tightly packed, and that can lead to the wrong buttons being pressed. 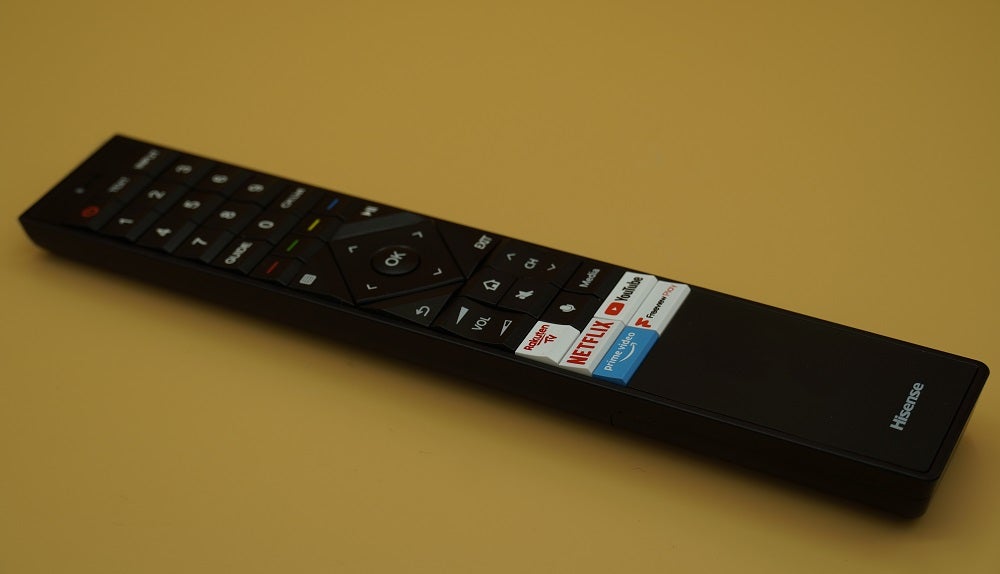 As I’ve mentioned in other Hisense TV reviews, VIDAA U 4.0 interface is very plain but hits the basics with access to 4K streaming apps in Netflix, Prime Video, YouTube and Rakuten TV. For Disney+ or Apple TV a streaming stick is needed. Freeview Play is there for access to UK catch-up apps such as BBC iPlayer, ITV Hub and All 4. 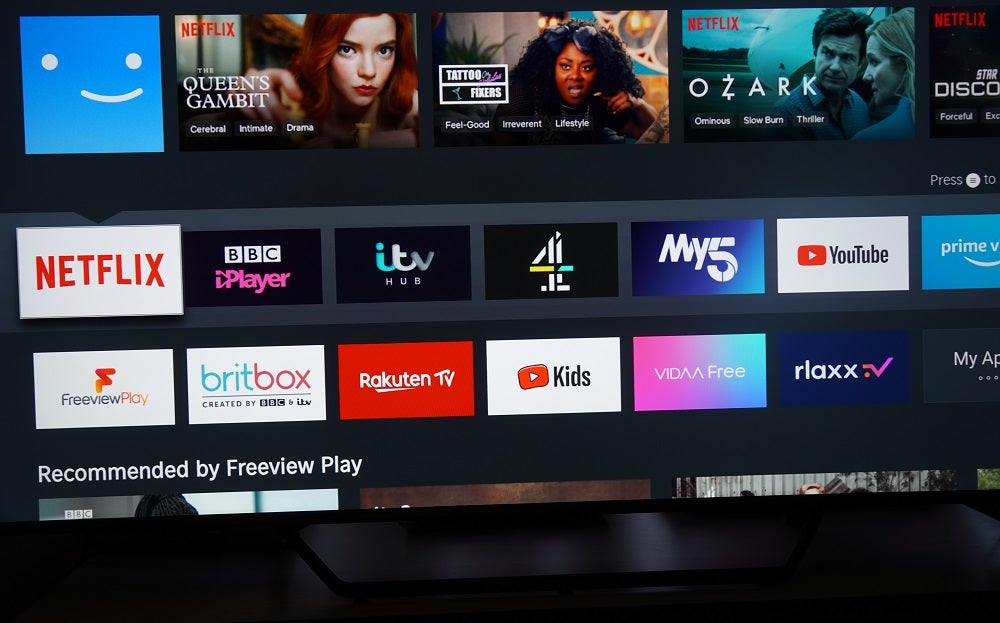 Connections are your usual lot: 4x HDMI 2.0, 2x USB 2.0, a Digital optical out, LAN, Composite, CI Slot and satellite and aerial inputs. HDMI 1 is ARC (for a soundbar), and all four HDMI ports are 4K/60Hz compatible. For wireless connectivity there’s Wi-Fi (2.4/5GHz) and Bluetooth. 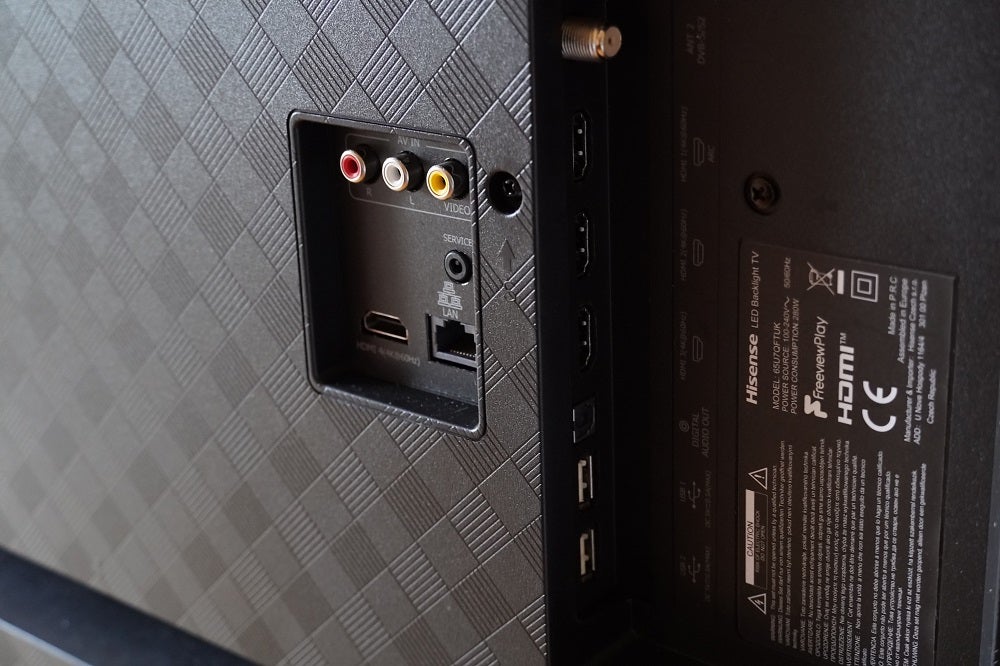 Although it’s not mentioned in the specs, streaming via Chromecast is an option. Alexa is available through the Remote Now app (iOS and Android), and it’s happy to ‘work with’ Google Assistant via external speakers. The U7Q doesn’t have a glut of smart features, but it serves anyone after the fundamentals.

Like the U8Q the display is not native 10-bit. It uses an 8-bit + FRC panel that uses dithering to replicate the range of colours of a 10-bit panel. The Full Array Local Dimming (FALD) system should, in theory, produce better black and contrast levels.

The Hisense U7QF wasn’t built with the PS5 or Xbox Series X in mind, so you won’t find High Frame Rate (4K/120Hz), Variable Refresh Rate or Auto Low Latency Mode. Game Mode needs to be turned on manually and when it is, input lag delivers a speedy 10.5ms.

Let’s start with the issue that caused the most grief with previous Hisense sets: motion. Initially the U7Q’s motion remained awkward and in Dolby Vision films there was smearing at the slightest of movements.

However, an update appears to have ironed this out. It’s not perfect, but motion is smoother. Judder is still apparent, but less egregious. Smooth and Standard Ultra Smooth Motion settings serve up the subtlest performance, though the Film works well for movies.

Problems still persist. The scene in Skyfall (Dolby Vision Bright) where Bond is served a martini at the Macau gambling palace features smearing, but at least it’s better controlled (just). Animation can suffer too, as an episode of The Simpsons eluded the Hisense’s grip. 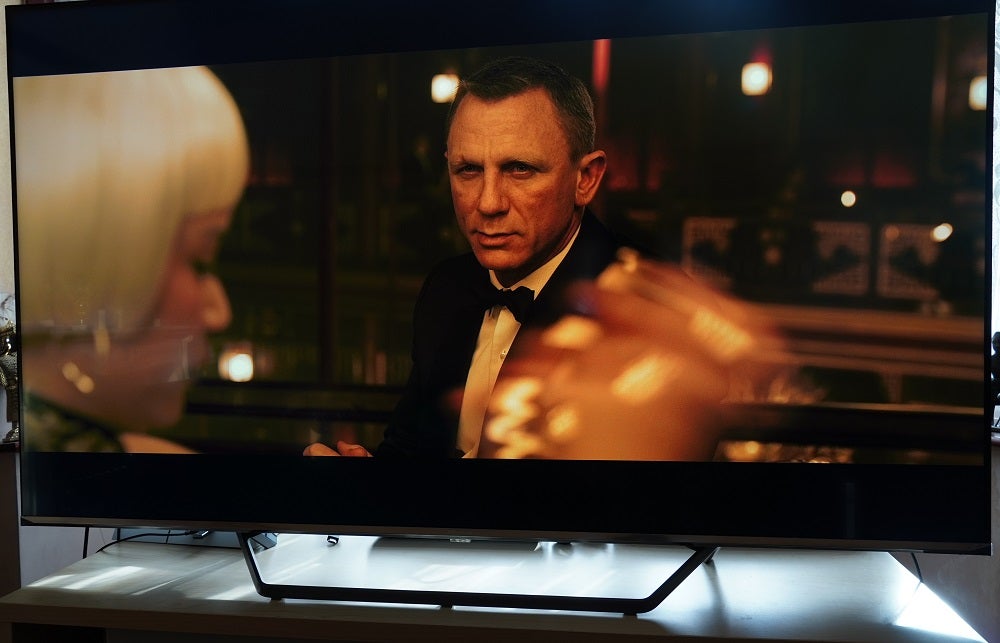 Despite that, the opening ten minutes of 1917 (Dolby Vision) shows solid motion stability as Schofield and Blake make their way through the trenches. The only noticeable effect is some blurry edge definition as a group of soldiers walk by. The same can be said for the shaky-camera races in Days of Thunder (Dolby Vision). The U7Q is more confident in this aspect than it was pre-update. 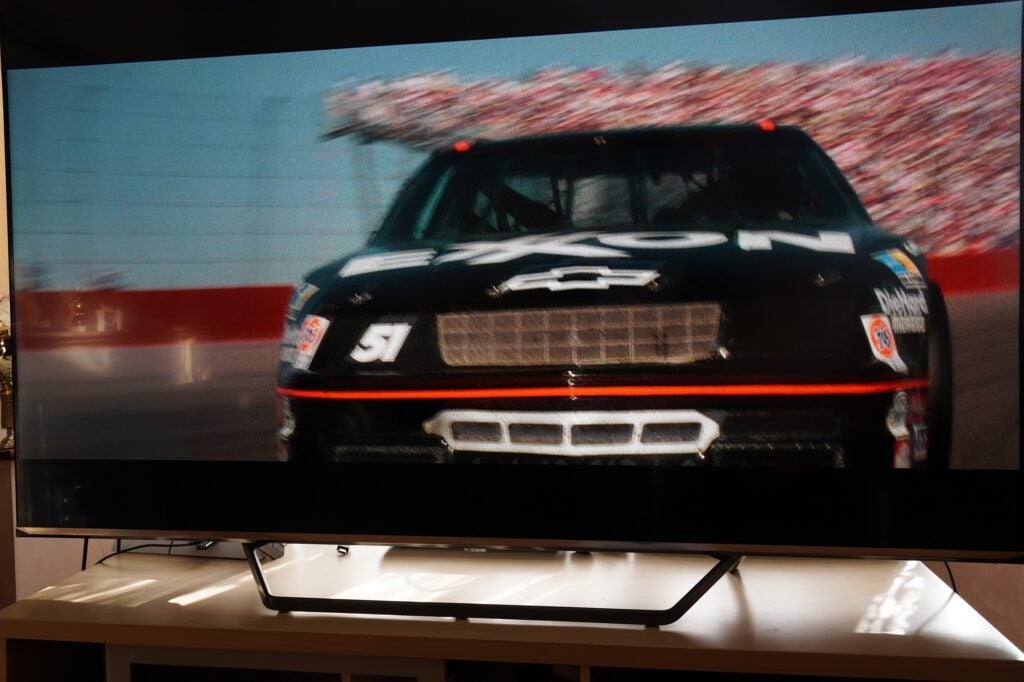 Head-on viewing is fine but move off-axis and there’s blooming as well as a green tint to blacks. It’s similar to what I encountered with the U8Q despite the U7Q’s Full Array Local Dimming panel. The U7Q is better suited to brighter rooms than darker ones, especially for dark HDR scenes.

Black levels are decent but lack depth, as shadow detail is affected by the spectre of blooming. Viewing angles are average as colours lose vibrancy. You can enable the TV’s Viewing Angle technology (Expert Settings), which adds a warm filter, but to my eye looks less natural. 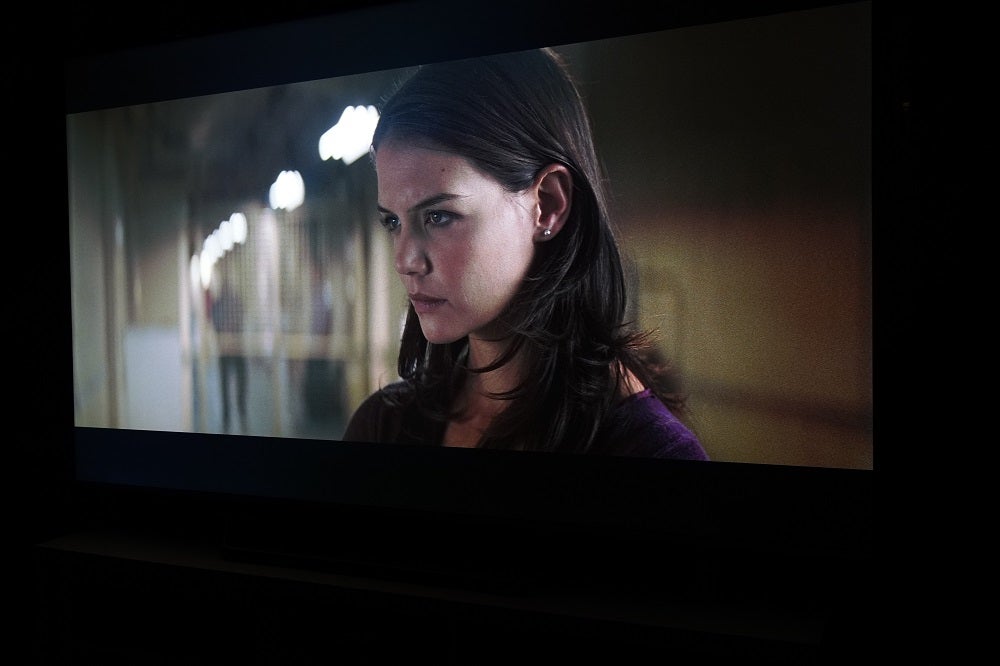 There’s much to enjoy about the U7Q’s picture performance. In terms of set-up, I’d suggest turning off Ultra Smooth Motion for 4K, as well as Noise Reduction and MPEG Noise Reduction as they produce noise. For Blu-rays pick Cinema Day over Standard as the latter makes blues and whites teal in appearance and pushes contrast to a more ‘Vivid’ look.

All the main HDR formats are here, which means HDR10, HLG (used by iPlayer and Sky Q), along with HDR10+ and Dolby Vision. The latter two add dynamic metadata to the HDR signal, optimising the performance to give the Hisense a better chance at HDR with its relative 700 nits of (peak) brightness.

And the Hisense’s HDR performance is likable. Colours are bright, well balanced, and punchy in HDR Standard mode. Complexions convince and are further refined by Dolby Vision. The kids of Spider-Man: Far From Home have punch and colour to their skin tone and it adds to the Hisense’s attractive picture. 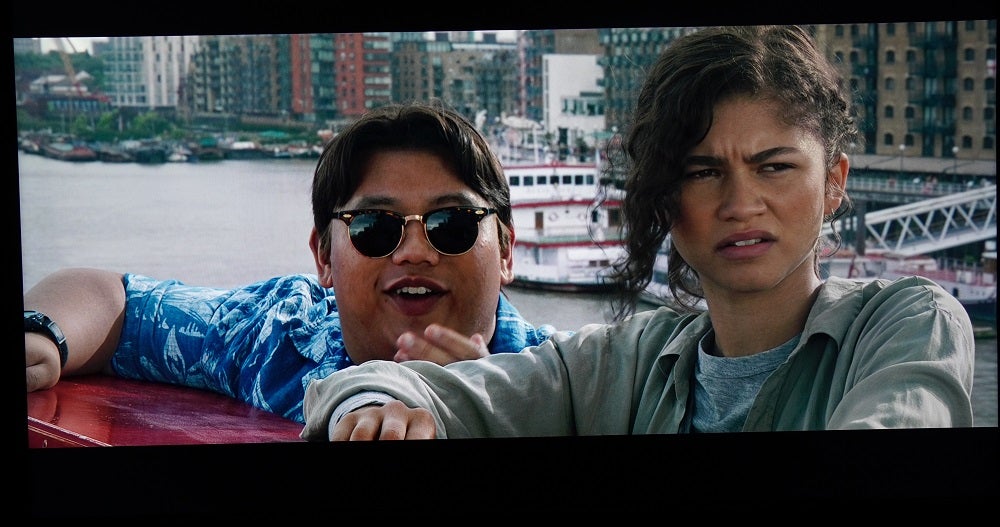 Detail levels are very good, bringing out the fine detail of the Forties’ clothing, Spitfire cockpits and faces in Dunkirk. It lacks a little sharpness, but overall fidelity is good.

The Hisense U7QF’s HDR prowess has enough juice for some impactful highlights. The opening scene of John Wick: Chapter 2 and the headlights and taillights of cars, as well as the wet shiny surfaces ‘pop’ off the screen. Dolby Vision improves the set’s tone-mapping, colours, and black levels, while minimising blooming (to an extent). The U7Q seems tailored to Dolby Vision over HDR10+ as black levels in the latter (Alien and Widows) look dull. 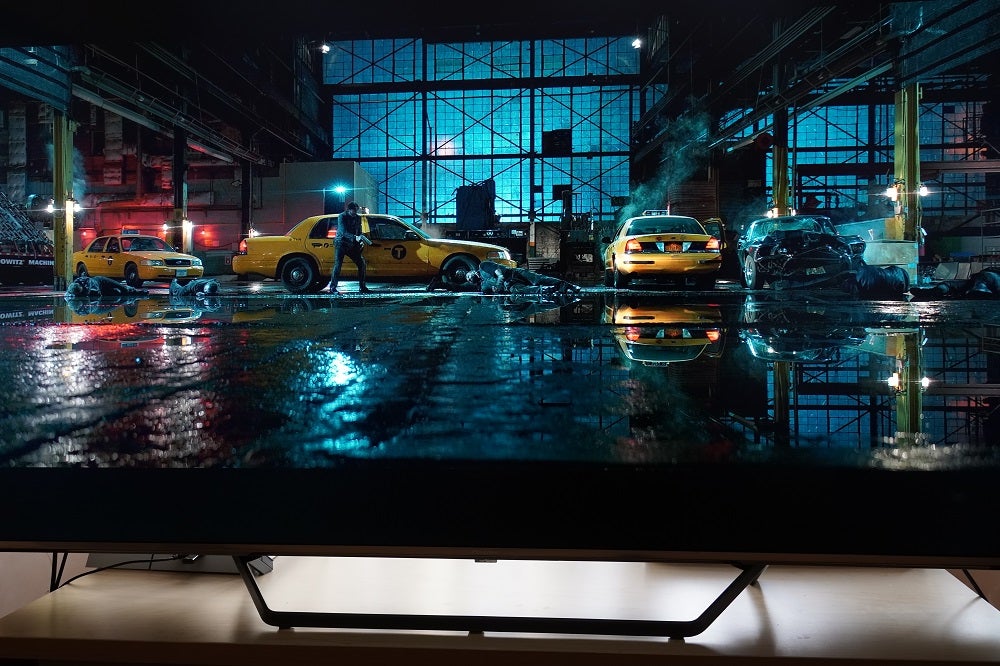 Upscaled HD broadcasts are punchy, bright and have a strong sense of colour. Again, there’s a slight softness, especially with faces, but there’s enough detail for the Hisense U7QF to feed on. Turning Adaptive Contrast to Low amps up colours and black levels, but higher settings have an impact on detail. Edge definition around people and objects is mostly reliable, but movement causes some fussiness.

Standard definition lacks, well, definition, clarity and sharpness. Again, I like how the Hisense portrays colours, and there’s not as much noise as you might expect. 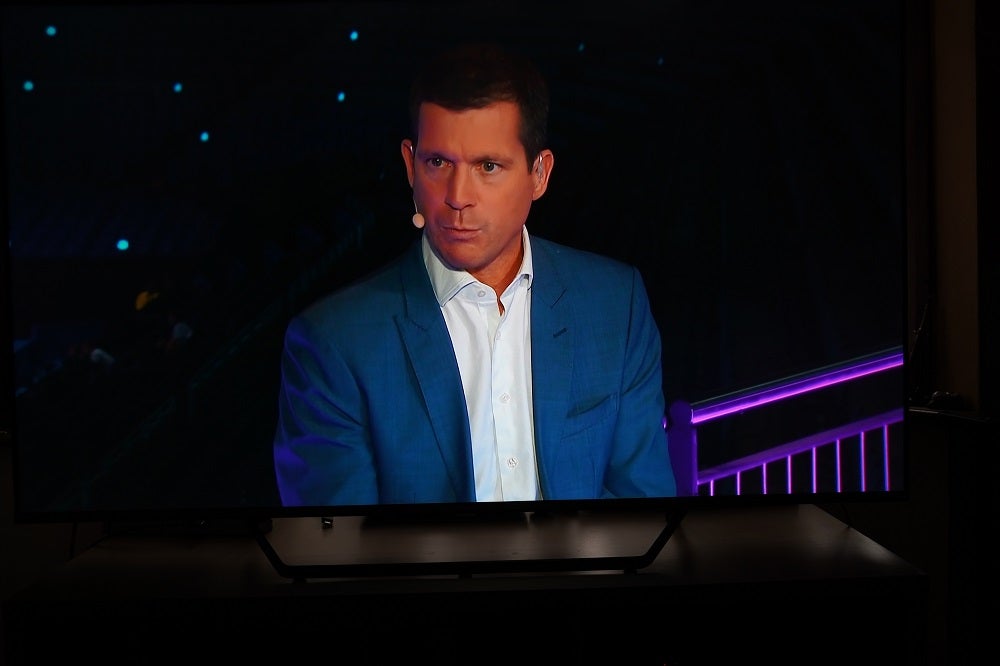 Audio is funnelled through 2x 10W speaker system and there’s support for Dolby Atmos. This isn’t the immersive sound of soundbars and surround systems, but an attempt to produce better sound through the TV’s speakers. 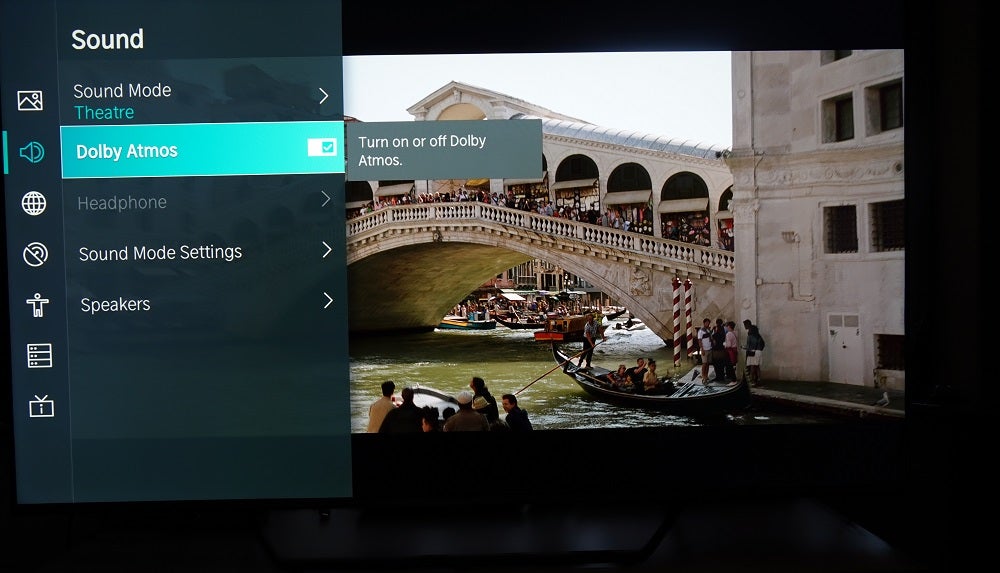 The performance is decent and best suited for broadcast as it serves up clear dialogue quality. It’s also offers decent panning across the soundstage, as well as offering some specificity in terms of where sounds emanate from.

Anything that requires dynamism and a sense of punchiness sounds timid, though. Turning on the TV’s Atmos mode creates height – Thor’s thunder in Thor: Ragnarok echoes from the top of the screen – but there’s also a thin, muffled tone with impact sounds lacking force. Non-Atmos soundtracks fare better, but I’d advise a soundbar.

You should buy the Hisense U7QF if…

65-inches for less than £900 is a good deal in our book, and while the U7Q has a few issues, it’s an enjoyable performer.

There’s no support for silly acronyms such as VRR and ALLM, but the Hisense’s performance is quick at 10.8ms. That’s LG/Samsung territory.

You’ll know if a show or film is in Dolby Vision when the logo pops up, and the U7Q is at its best in this mode with less blooming, better colours and black levels.

You shouldn’t buy the Hisense U7QF if…

There’s none of the headline features here, so if a brand-new console is of interest then the Hisense is not optimised for it.

Updates have made the U7QF better, but not completely absolved it of motion handling issues. It lags behind other manufacturers in this regard.

It sounds rather obvious, but the reason we say this is that we’d recommend a soundbar for the U7QF, but the awkward stand design means you’ll need even more space to accommodate both the TV and an external sound system.