Panasonic makes a compelling argument for big screen 4K HDR viewing with the HZ1000. Picture quality with HD and 4K sources is fabulous, the multi-HDR support covers the basis and the sound quality is better than expected. This TV is all about home cinema viewing, making few concessions for gamers.

The Panasonic HZ1000 is the Japanese TV manufacturer’s third tier OLED for 2020 and arrives with improvements and new features over the 2019 GZ1000.

The Panasonic HZ1000 boasts a similar feature set to the HZ1500 and HZ2000 OLEDs but drops some of the higher picture and sound specs to make it more affordable.

At the time of review the 65-inch Panasonic HZ1000B was priced at £2399/€2699, and is available for purchase from the Panasonic Store, Richer Sounds, Sevenoaks Sound & Vision, Hughes Electricals and John Lewis. In Germany, the HZ1000 is known as the TX-65HZW1004, while Panasonic does not sell TVs in the US or Canada and the HZ1000 is not on sale in Australia.

The build quality of Panasonic’s OLEDs is of the no-frills, no-fuss kind. The uniform lines and black finish give the HZ1000 a utilitarian feel – and that’s fine. It’s robustly built set not inclined to be as flashy as its competitors. After all, a TV is meant for watching.

Connections are a combination of side-facing and downward-facing ports. That makes it easier for wall-mounting but introduces some awkwardness in locating the right port. 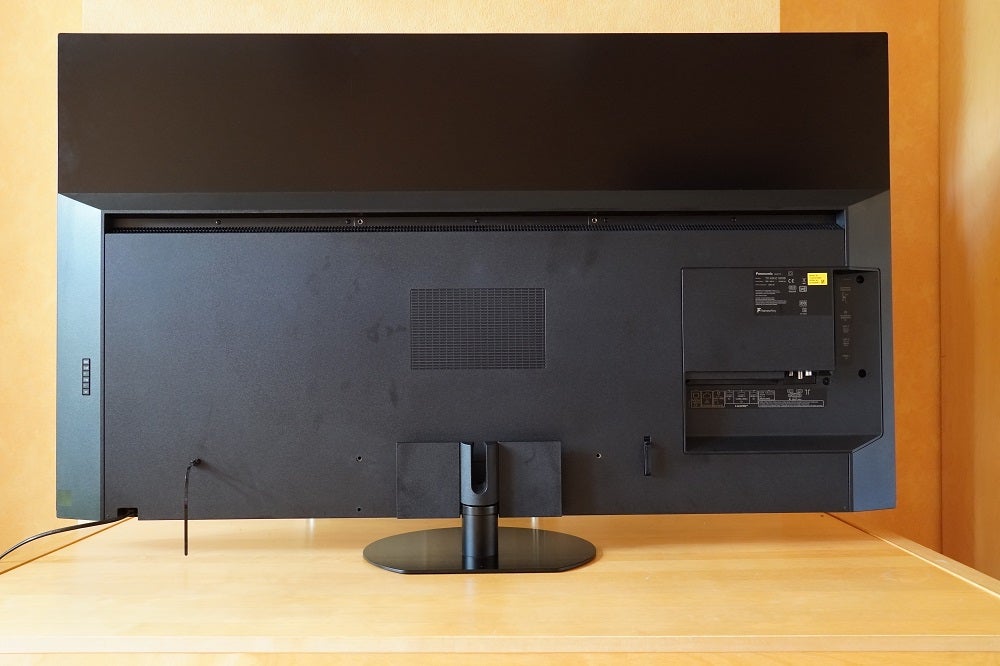 Though the HZ1000 omits the integrated upward-firing Atmos speakers, at 1449 x 896 x 350mm (whd) it’s virtually the same size as its 65-inch siblings. On the left-hand side of the rear panel are physical controls for volume, channel hopping and power.

2020 brings a change with the adoption of a swivel stand. That helps position the screen to avoid sun glare or reflections. Around the back is a cable holder that can be attached to the main stand. In my view it’s the only part of the design that feels flimsy, but once attached the cable clutter implementation brings some order to the back area. 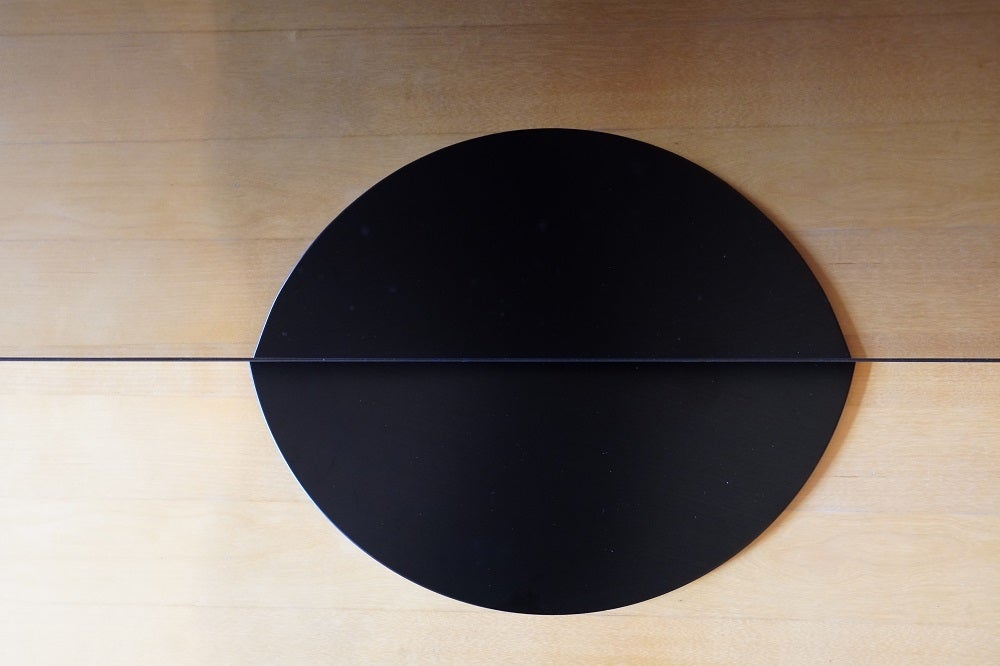 The remote is an old-fashioned chunky zapper that almost feels like you’re holding some sort of miniature cricket bat. It is responsive though, with buttons well laid out and access to Netflix and Freeview Play. The much-hyped button for Filmmaker Mode button simply brings up a list of various picture modes, of which Filmmaker is one. 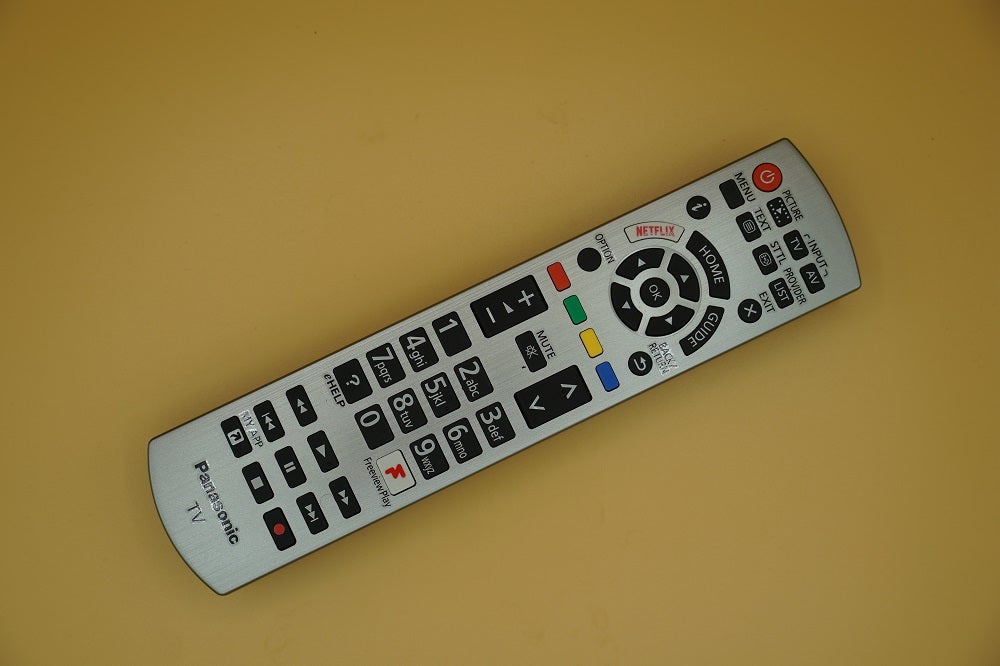 Connections tally at 4x HDMI (one side-facing, three downward-facing), with one eARC input (HDMI 2). The HZ1000 also supports HDMI 2.1 in its Auto Low Latency Mode, which detects a game console and puts the TV automatically into Game Mode.

Panasonic hasn’t tailored the HZ1000 for the PS5 or Xbox Series X, so there’s no VRR or HFR (also known as 4K@120Hz). Gaming latency is not enough to trouble the best, but respectable with our tests measuring it at 21.7ms. Other connections include 3x USB (including a USB 3.0 port), a Headphone/Sub out, Ethernet, CI+ 1.4 slot, satellite/aerial tuners, analogue video input and a digital optical output. Wireless connectivity includes Bluetooth 4.2, Wi-Fi and DLNA protocols. 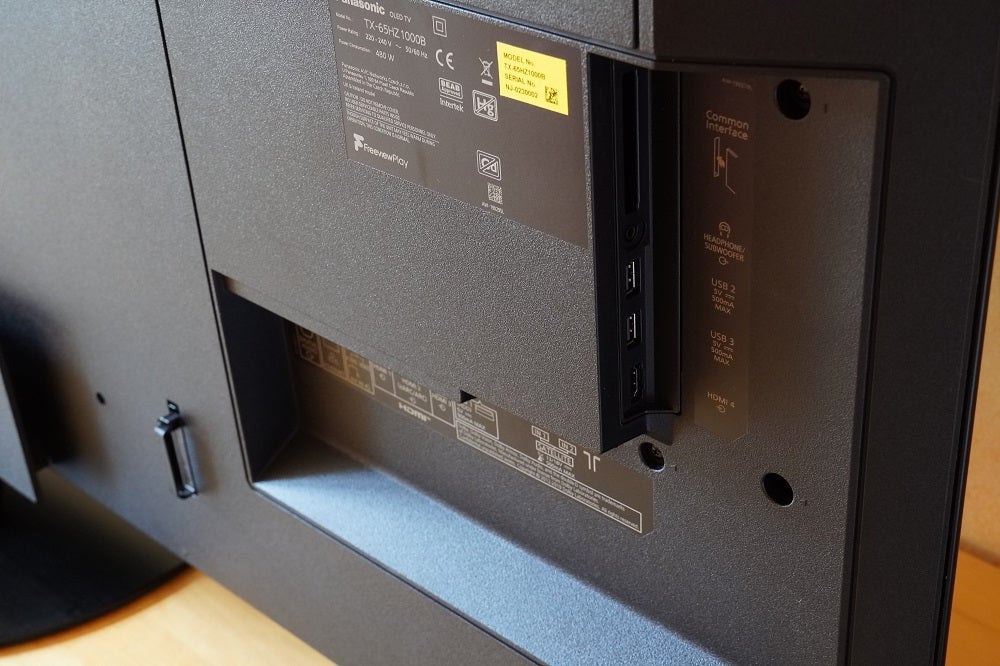 Panasonic’s move towards Dolby Vision in 2019 meant it racked up all the HDR variants (including HLG Photo). For 2020 they’ve also added Dolby Vision IQ. IQ replaces the ‘normal’ Dolby Vision mode and uses the HZ1000’s light sensor to adjust picture quality according to the level of ambient light in a room. In theory, a TV with IQ should retain detail that would be lost in a bright or darker room. 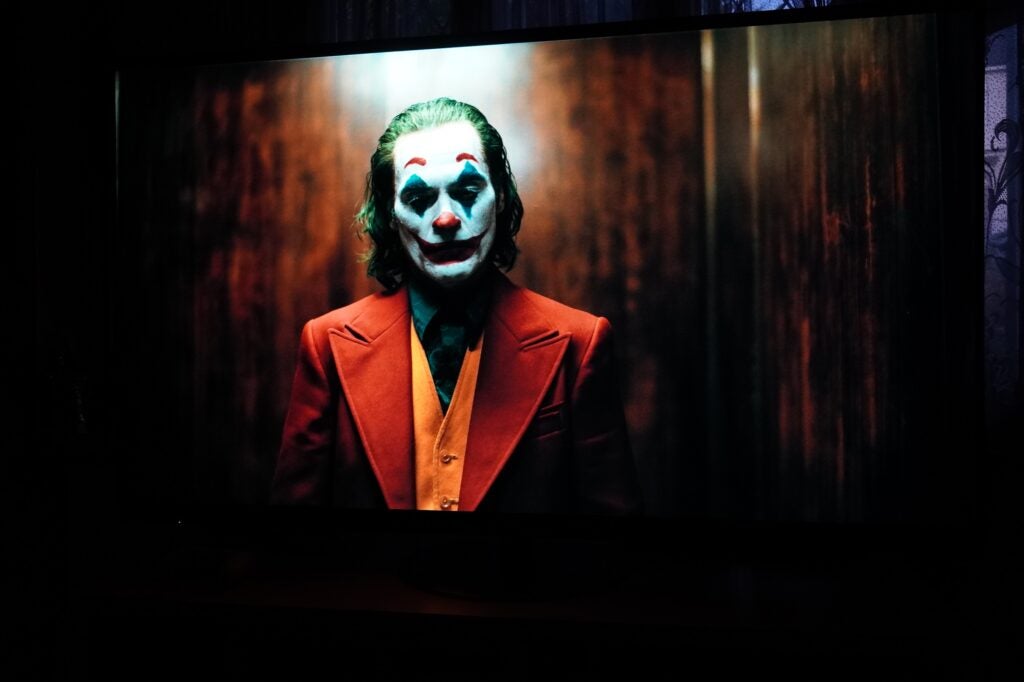 The much-touted Filmmaker Mode disables a TV’s processing to reflect the original intent of a film or TV show. There’s no content available that brings up Filmmaker Mode yet, and so it needs to be turned on manually.

Racking up further picture quality modes there’s also Netflix Calibrated Mode – effectively Cinema mode for Netflix. The HZ1000 is also certified as a Netflix Recommended TV by hitting various mandates such as quick access to the app and frequent updates. 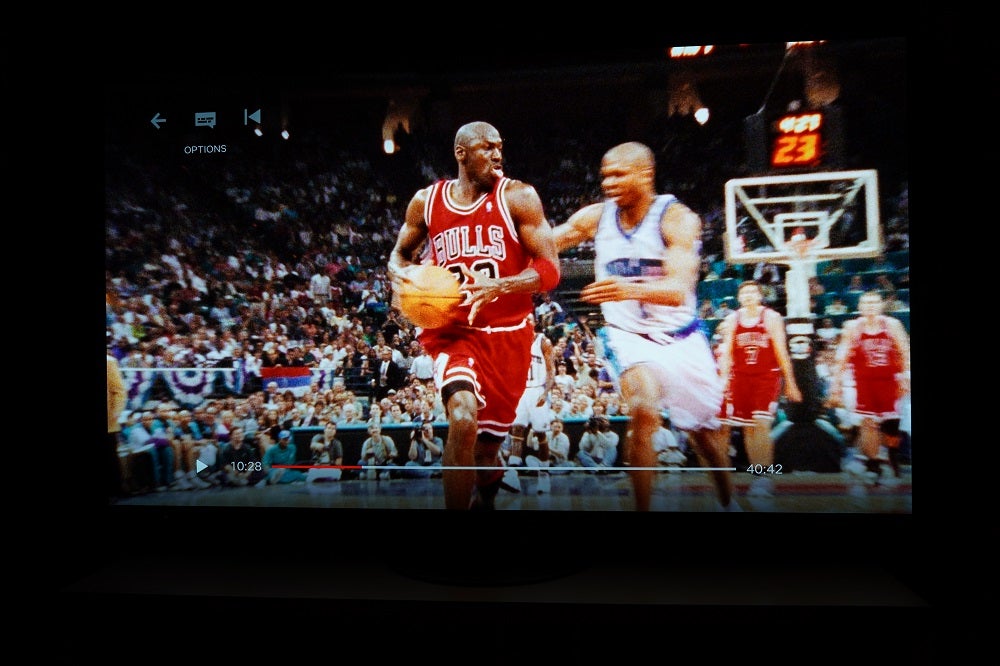 Powering the image is Panasonic’s HCX Pro Intelligent processor, which beams images to the Master HDR OLED screen (which has again had input from Hollywood colourist Stefan Sonnenfeld). Panasonic says it’s improved its Black Frame Insertion (BFI) tech, which inserts a black frame in between each broadcast frame. It makes the image darker, but there’s no noticeable flicker, blurring or stutter. 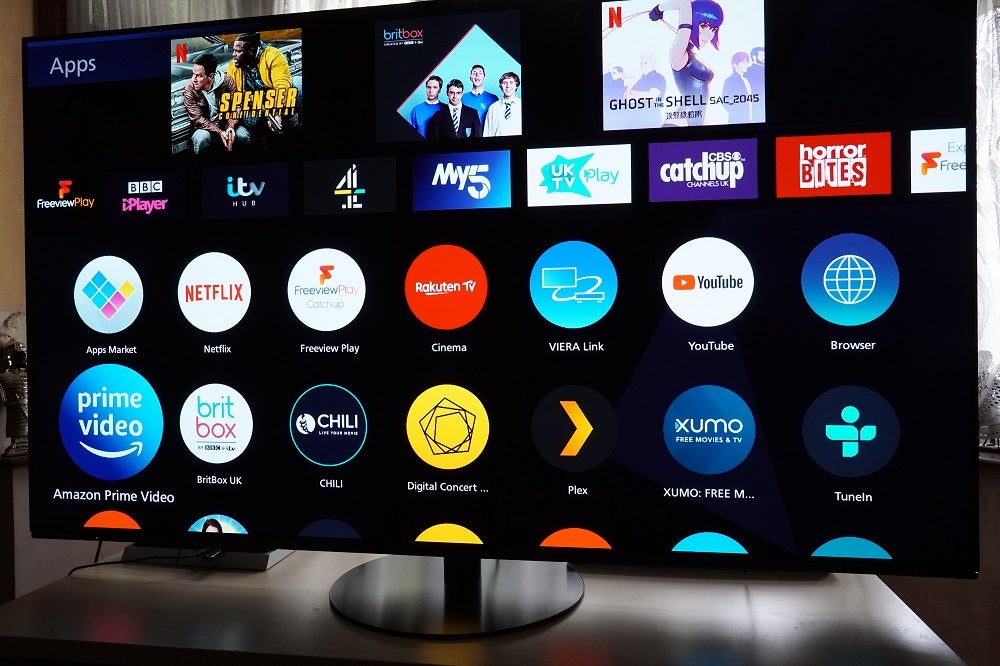 The smart UI is version 5.0 of the My Home Screen interface and it’s simple to use, employing big colourful roundels to display apps. The landing area for My Home Screen can be customised to create shortcuts for apps you use the most. There’s no Apple TV or Disney+, so consider a streaming stick to go with the HZ1000.

The Panasonic HZ1000’s general menu system feels functional and perhaps in need of a refresh, but again it’s straightforward to use with more settings and customisations than you’ll know what to do with.

Freeview Play includes access to UK catch-up apps in BBC iPlayer, All 4 and ITV Hub etc. There’s a sprinkle of Internet of Things (IoT) with Amazon Alexa and Google Assistant compatibility through an external speaker.

As sure as the sun rises in the east and the sets in the west, you can rely on a Panasonic OLED for impressive picture quality. The 65-inch model is best for those who enjoy a big canvas to watch their films in 4K HDR.

Where the size doesn’t do the picture quality as many favours is the upscaling, at least for HD broadcast TV. It’s still a very good performance but it lacks sharpness. It makes up for it with colours that are bold in description, well-conveyed skin tones and what noise there is barely registers. 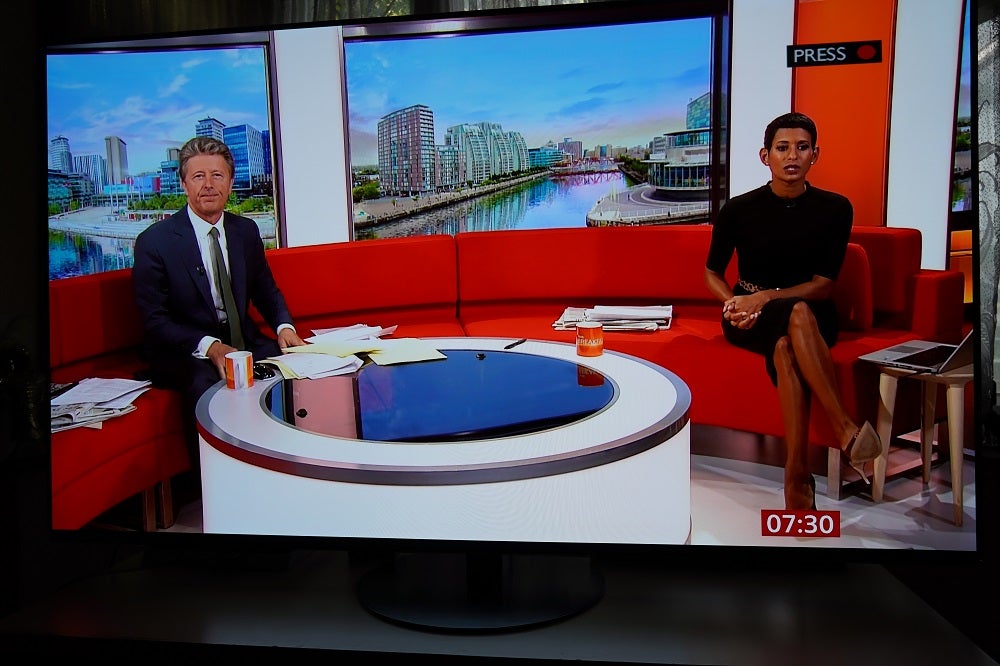 A spin of Speed Racer on Blu-ray via the UB820 4K player and the Panasonic rolls up its sleeves for a dazzling display of expressive colours. The first race at Thunderhead is a dizzying showcase of colours, translating the Anime feel of the film in a manner that leaps off the screen. Scott Pilgrim vs the World’s (Blu-ray) detail levels and clarity are so good you could almost mistake it for 4K. Standard definition fares less well with fuzzier edge definition and lack of sharpness. While detail and clarity are a premium with a DVD of Immortals, it’s watchable enough – especially with Dynamic mode switched – the pumped-up colours masking the lack of definition to a point.

Motion-handling is impressive with Panasonic’s Intelligent Frame Creation offering a range of options (Custom, Max, Mid, Min, Off). Even with IFC off its smooth, with only slight blurring and stutter in camera pans. Set IFC at Min for broadcast TV and that offers a stable performance without tipping into the ‘soap opera’ effect. I’d be inclined to keep it a Min for 4K if you’re someone who prefers smoothness over 24fps’ stutter. 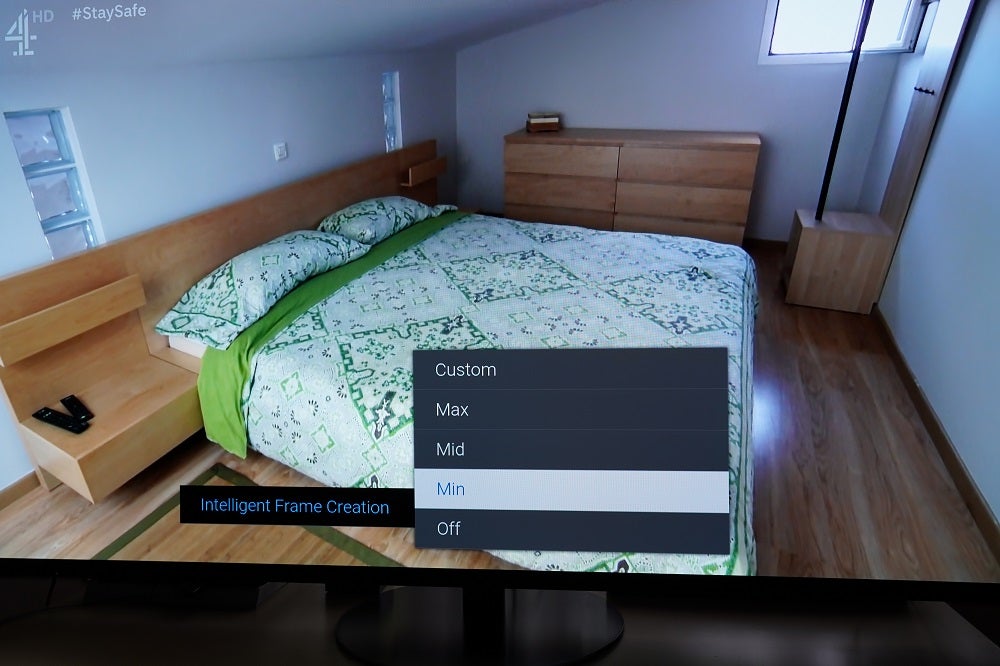 Along with Dolby Vision IQ, the HZ1000B retains HDR10, HDR10+ and broadcast HLG for services such as iPlayer and Sky Q. Differences between HDR10+ and Dolby Vision can be either small or significant. 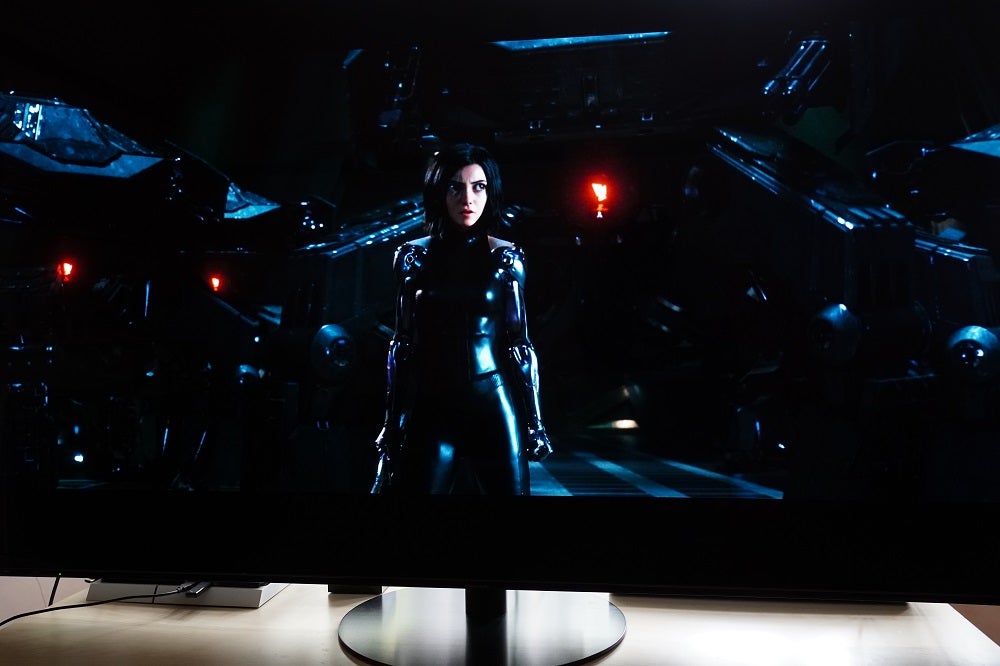 And it’s with 4K HDR content where this TV sings. Black levels are impeccably deep, and contrast is excellent as befitting an OLED and that makes for a gorgeously saturated and detailed image. 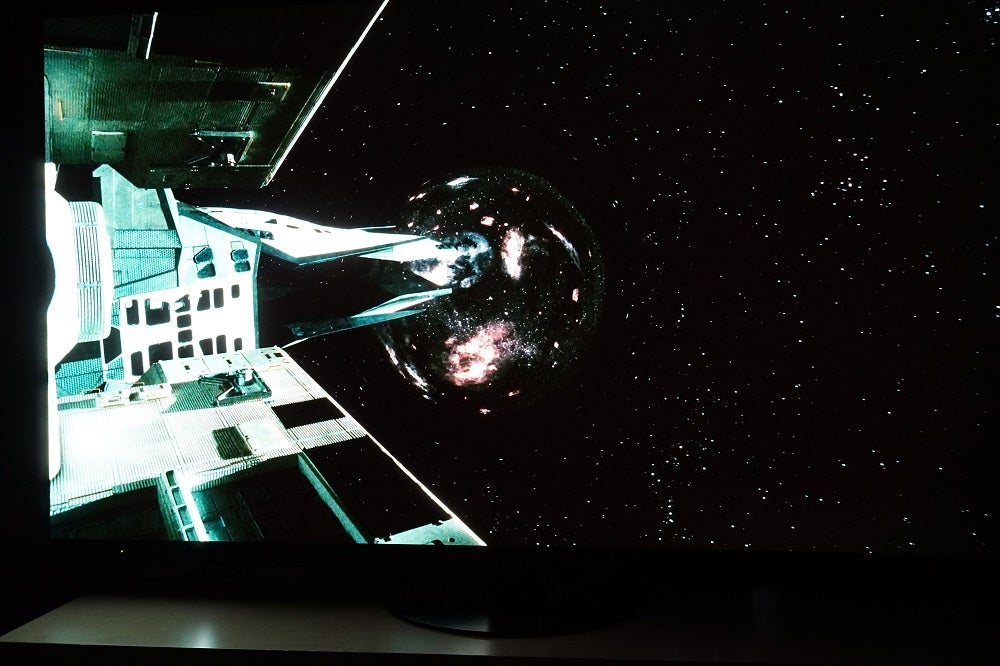 While colours lack the outright brightness and punchiness of a QLED, they’re meticulously described and wholly convincing in tone. The HZ1000 provides sumptuous image after sumptuous image, selling Panasonic’s motto of “Bringing Hollywood to the Home” with some filmic images.

Fine detail levels are exacting, clarity is excellent, and images look wonderfully naturalistic. Contrast produces a sense of depth that grabs your attention, while colour gradations alternate between subtle and rich, adding up to an arresting image.

Near dark details are captured in an almost effortless manner, and it’s a TV that loves a close-up, the 65-inch screen giving a huge scope to the framing and compositions of Ang Lee’s Hulk. 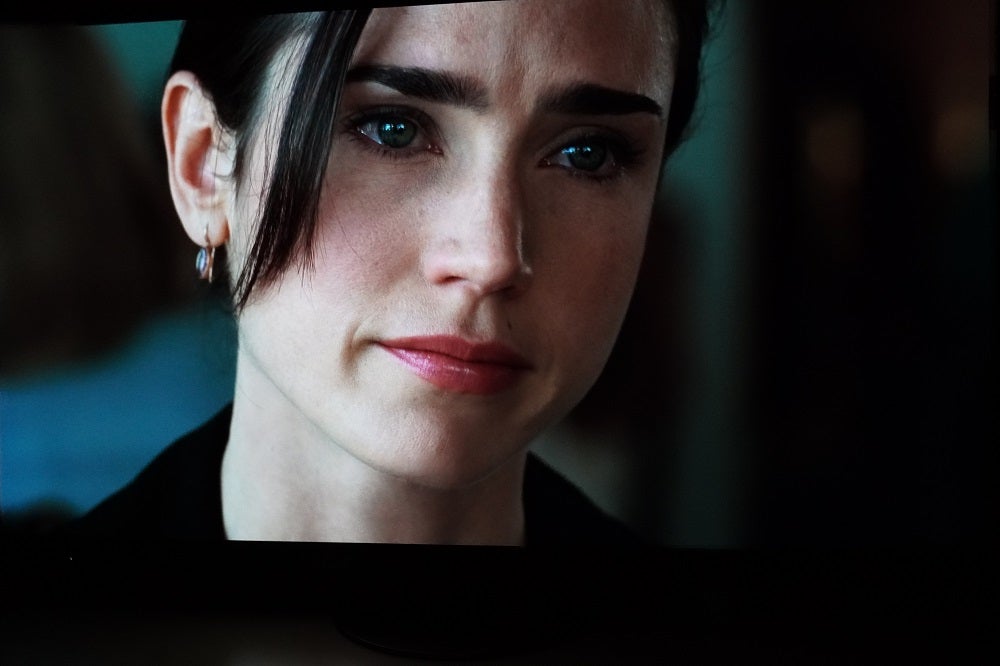 Support for Dolby Vision and HDR10+ makes the HZ1000 a TV not just for 4K Blu-rays but for streaming services too. Viewing from wide angles is superb, and you’d have to approach the set from an acute angle to notice a drop off in intensity. While Dolby Vision IQ brings out perceptible detail; in a darker room I’d wager the Dark setting is brighter – but the difference is minimal.

If there’s a blemish (or two) there are times where images can look slightly soft as noted earlier. Another is the Dolby Vision Bright setting, which sparks questions with regards to its accuracy. It’s so far off the IQ setting that it leaves you wondering if what you’re watching is the ‘filmmaker’s intent.

There’s not much gained with Filmmaker Mode. With Interstellar the difference between it and the Professional 1 picture setting is little more than a slight increase in brightness. Filmmaker Mode with HD SDR content drums up a more filmic look but watching Ex Machina (Blu-ray) and brightness levels drop in a way I don’t think many will appreciate. 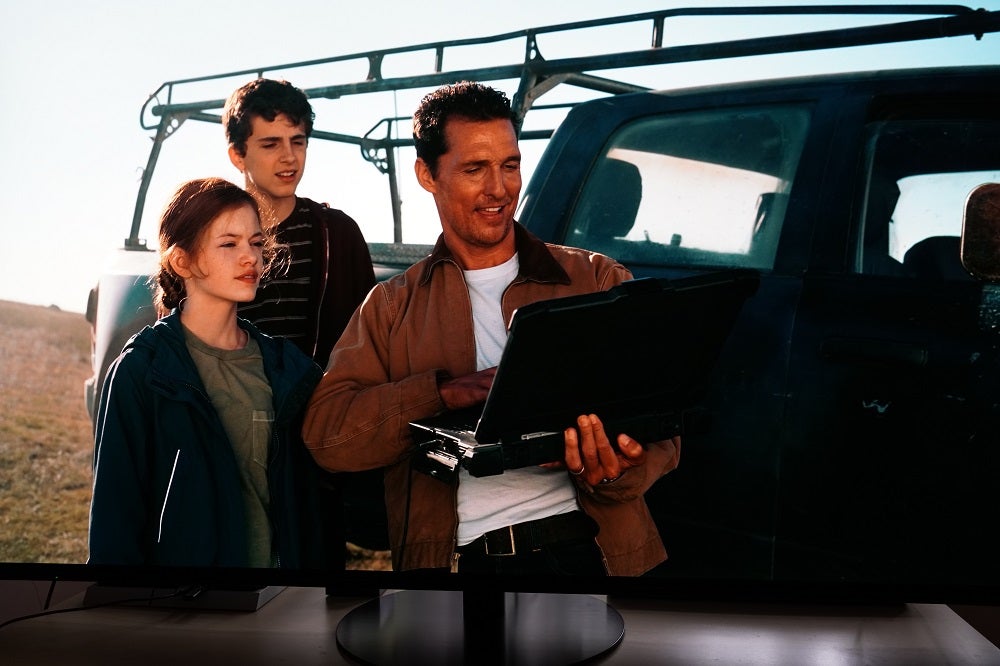 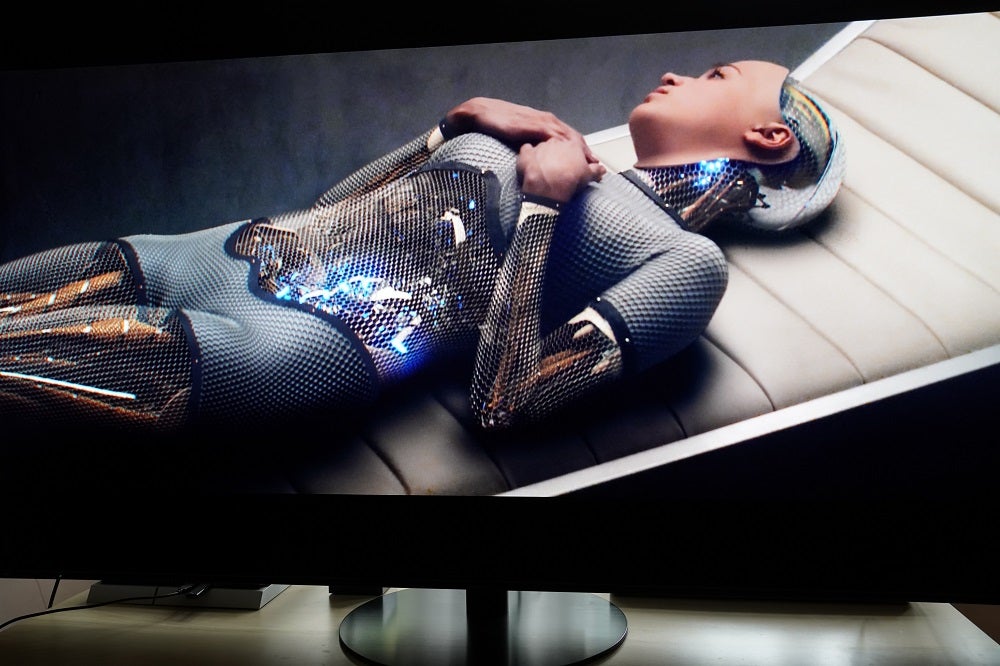 The Panasonic HZ1000 supports Dolby Atmos but there’s no overhead theatrics. Its purpose is to evince a better audio performance and it does with good dynamics and a spacious, defined and detailed presentation.

It’s a big-ish sound – not one that escapes the confines of the screen, though that’s not what this set appears to be going for. Audio pours off the screen towards the viewer, with good placement of effects in the left and right channels that create space and some depth. 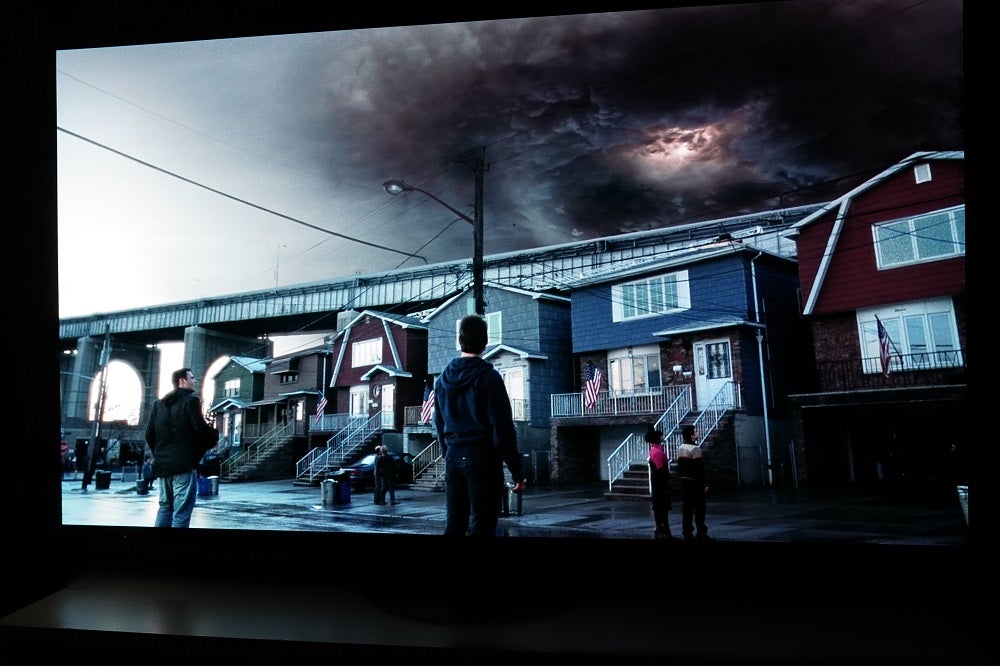 It’s capable of decent intensity – the lightning storm in War of the Worlds is given a jolt of energy by the HZ1000’s 30W sound system – and the bass is fine. For images this good, you’d want a soundbar or a surround system to complement the HZ1000.

It’s hard to imagine the picture quality of the HZ1500 and HZ2000 besting what the HZ100 is capable of. If you’re not fussed by the upfiring speakers, this is the Panasonic OLED to get.

The HZ1000B’s motion handling is excellent, smooth as butter and avoiding the ‘soap opera’ effect.

The HZ1000 is a Netflix Recommended TV and boasts support for Dolby Vision IQ, optimising the image automatically day or night.

Panasonic isn’t going for the gaming market with its 2020 OLEDs. Gaming performance is fine but it’s not tuned for consoles such as the PS5 or Xbox Series X.

Panasonic is light on the apps compared to its rivals. There’s no Disney+ or Apple TV, along with many others.

The Panasonic isn’t loaded with many smarts compared to its rivals. Philips 65-inch OLED805 is cheaper, stacked with more smart features and has Ambilight.