The Hisense U8Q puts itself into contention with a satisfying upscaling performance and enjoyable 4K performance. Gamers will also enjoy the fast performance on tap. It’s not the all-rounder it could have been due to some iffy motion and backlight issues. Consider a soundbar if you want a beefier presentation too.

The Hisense U8Q is its flagship 2020 television, featuring wide HDR support and an integrated speaker system from audio brand JBL.

After a dabble with OLED displays, Hisense has gone back to promoting its ULED technology as its main draw, with the U8Q sitting at the top of the 2020 TV tree.

And judging from the spec sheet, Hisense are pressing full steam ahead in their attempt to attract potential buyers to their TVs. The 55U8QFUK has multi-HDR support, a full array local dimming backlight and an integrated speaker system tuned by JBL. Is this the TV that places Hisense as a viable alternative to the likes of LG, Panasonic and Samsung?

At the time of review the 55-inch version of Hisense U8Q (also known as the 55U8QFTUK in the UK) had a price of £1099. In the subsequent months since its initial release, it’s gone down to £849/€879 at most retailers and is available to purchase from outfits such as Amazon, AO.com and Currys.

By and large the Hisense U8Q is an attractive-looking set. Available in 55- and 65-inch models, the bezel is unobtrusive, and the build quality is what I’d call robust. From the V-shaped pedestal – which unless you have a compact soundbar does restrict placement of sound systems in front of the TV – to the fetching material that covers the integrated front-firing speakers, the U8Q is a well put-together set. 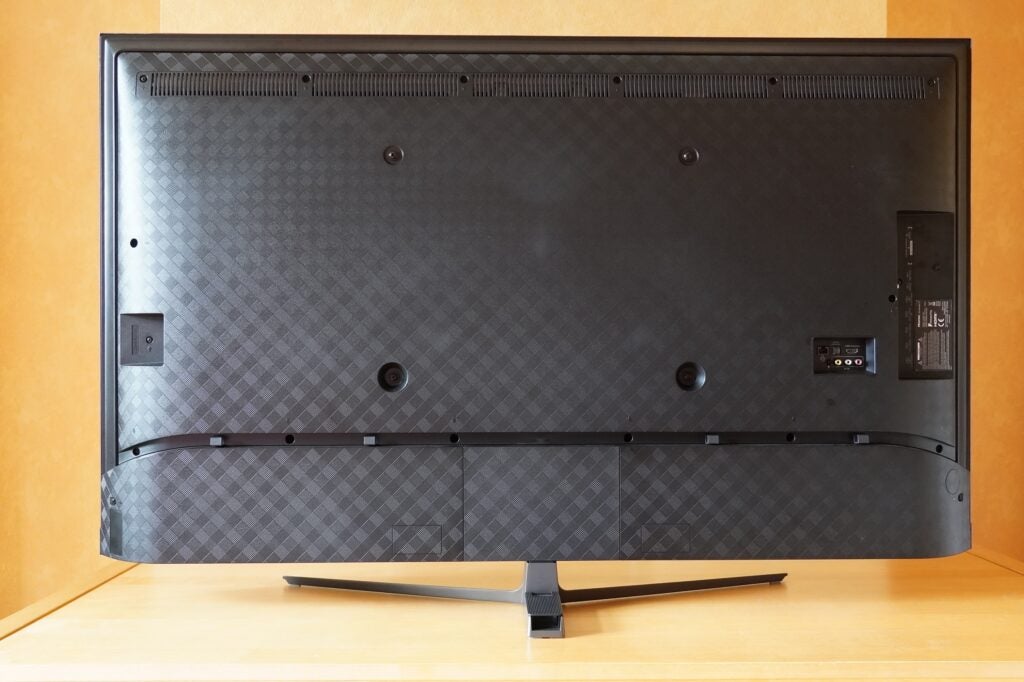 Assembly isn’t too laborious. Start with the various parts of the stand (which should be screwed in all at once), slot it into the main body, tighten the screws and attach a panel to cover it up. There’s a cable clutter feature for routing cables through the bottom of the rear panel and out through the stand. 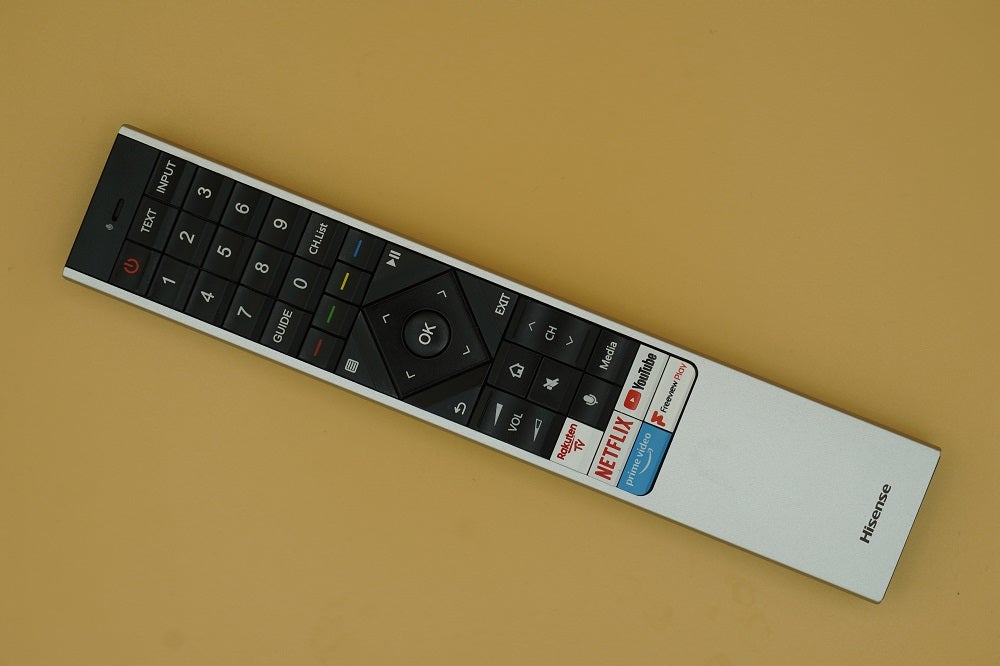 The remote is a slim effort but too compact for my liking. Buttons are smushed close together and if you have sizeable digits such as myself, you’ll jab at the wrong button with regularity. It’s also not the most responsive, which doesn’t help. Netflix, Prime Video, Rakuten TV, YouTube and Freeview Play have dedicated buttons, so you can hotfoot to the service you fancy.

Hisense U8Q features — Covers the basics for picture and gaming

The Hisense U8QF comes with plenty of features but compared to an LG or Samsung it is more limited in scope. Despite its premium status, we’re still hovering around the value-added area here.

The U8Q does not factor in HDMI 2.1, so remove VRR, ALLM, HFR (4K@120Hz) and eARC from the equation. There are no buzz-worthy modes in Filmmaker Mode or Dolby Vision IQ either, so if you’re not concerned by any of those features here’s what the U8Q has to offer. 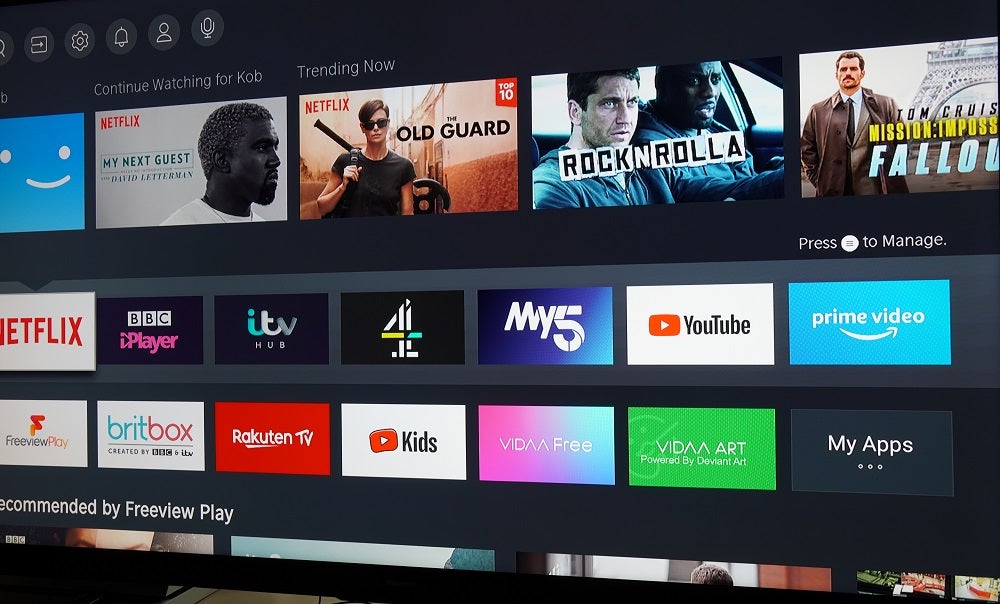 There’s the VIDAA U smart portal – version 4.0 – which avoids whizz-bang stylings and settles on a plain look. A VIDAA account can be created to keep the TV up to date, although the TV does download important firmware updates. In any case it’s not necessary for downloading apps. Netflix, Prime Video, YouTube and Rakuten TV are available, and with Freeview Play there’s access to UK catch-up apps. Disney Plus and Apple TV are not supported.

There’s an aspect of personalisation to the VIDAA interface with app recommendations and a peak at what’s trending for those with Netflix accounts. VIDAA is also Chromecast-able for flinging content at the TV. Alexa is built in, so the TV can be controlled by your voice if you fancy a chat.

There is a Game Mode and switching it on (manually) brings latency down to very speedy and consistent 14.2ms. 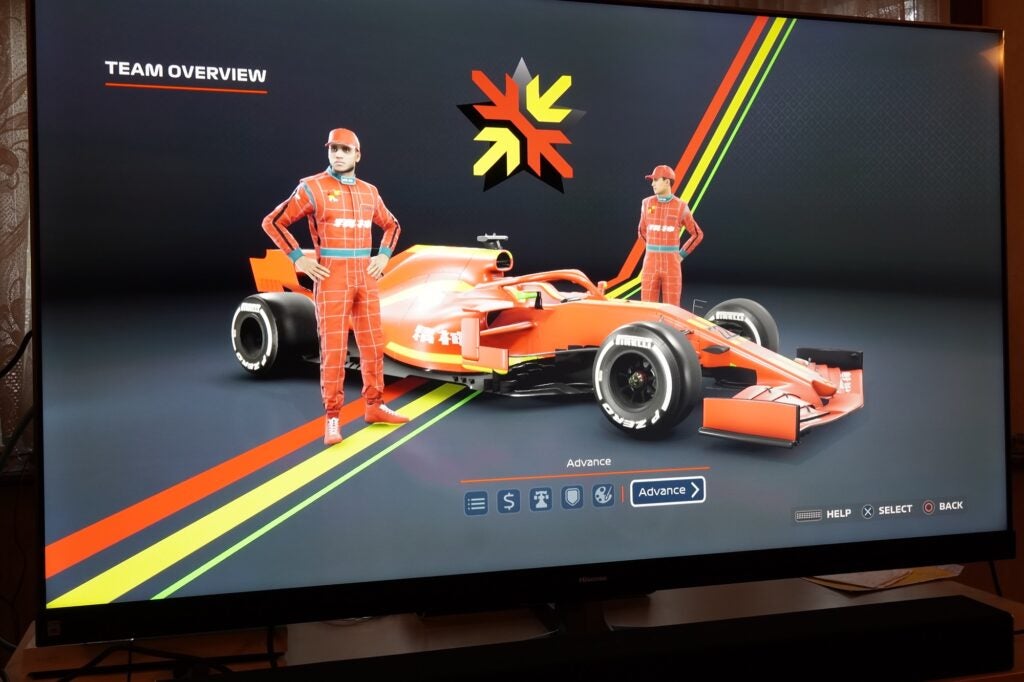 Hisense’s top-range TVs feature a full array local dimming backlight to aid with contrast and black levels. Hisense says the U8Q features 132 zones, and with a refresh rate of 120Hz, it in theory should produce smoother images with less flicker or stutter. Hisense says the set’s Quantum Dot Colour technology covers a wide spectrum of colours – a billion – for subtle shades and more realistic tones. 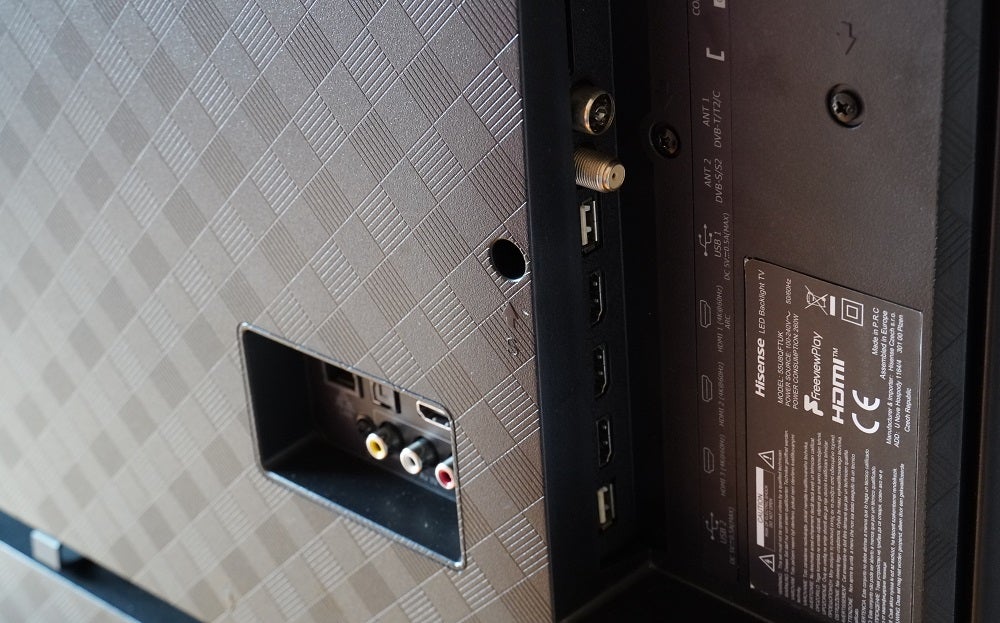 The U8Q’s upscaling prowess is decent with SD content and pretty good with HD. With the former, content is unsurprisingly blurry, lacking detail and sharpness. But it’s watchable, moreso with Ultra Smooth Motion enabled.

HD is a step up in all regards. Colours are better defined and there’s more fine detail for a pleasing picture. There’s a bit of noise around faces, noticeably with wrinkles, and while it’s not the sharpest, it is a satisfactory looking image. 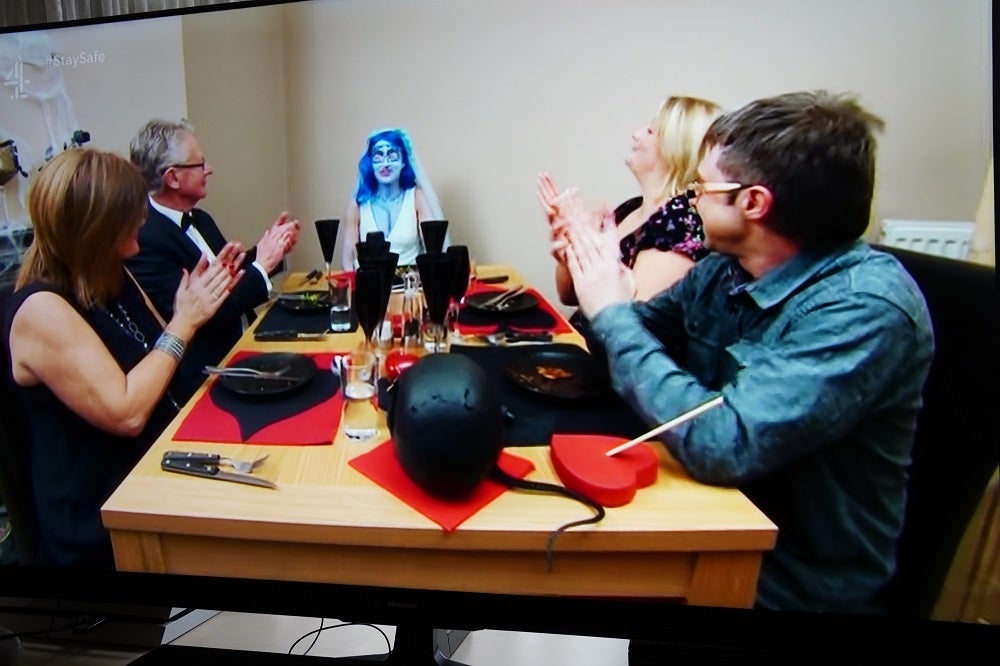 What plagues the U8Q is motion. The Ultra Smooth Motion feature should be turned on, as terrestrial signals can be rather staccato without it, but the U8Q doesn’t handle motion with a huge degree of confidence.

It’s most evident during a stream of a Premier League match on Prime Video. The jerky nature of the image is never fully resolved regardless of which Ultra Smooth Motion mode is used, or whether the de-judder setting is customised. Smooth or Standard are your best bets, but the slight blur and jittery motion that still pervades is distracting.

All forms of HDR are supported in HDR10, HLG, HDR10+ and Dolby Vision. Hisense says the panel can achieve a peak brightness of 1000 nits, but I’d imagine it’s less than that figure. Nevertheless, there’s a brightness and punchiness to 4K HDR sources that gives a good impression of what HDR can do.

Content from streaming services provides plenty of expressive colours, detail and clarity. Dolby Vision HDR viewed on Netflix looks slick, but the quality isn’t as good as the implementation on the OLED55CX.

With 4K Blu-ray content the Hisense stretches its legs. It doesn’t have a native 10-bit panel commonly used for HDR, instead employing 8-bit + FRC– a form of dithering that cycles between different colours with each new frame to match the colour range of a 10-bit panel – and results are pretty good.

Clint Eastwood’s Unforgiven is a good showcase for landscapes and skies, and the smooth transition between colours appears capably handled; the TV giving a good sense of the film’s picaresque beauty with its different tones and hues. Contrast is also pretty good, with dark and bright elements coexisting to create a sense of depth. 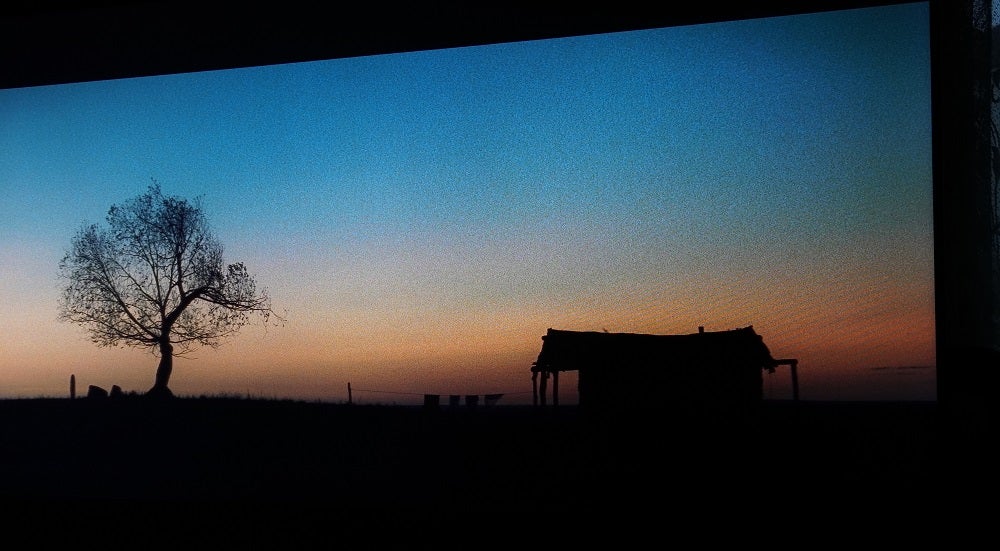 Shadow detail (that’s detail in the darkest parts of an image) is not the U8Q’s strongest suit. A whirl through The Dark Knight Rises and the TV can’t lift all the detail from the Batman suit. Raise the brightness and there’s more to be found, but there’s not much room to play with. A point up is all that’s needed, but anything more and scenes look washed out.

If you have a 4K player and discs capable of both HDR10+/Dolby Vision, I’d say the U8Q is better suited to the latter. Colours are more on point, as are textures, and the tonally its darker, which in Doctor Sleep makes for a more convincing picture. Dolby Vision Bright and Dark modes are available alongside a custom version. 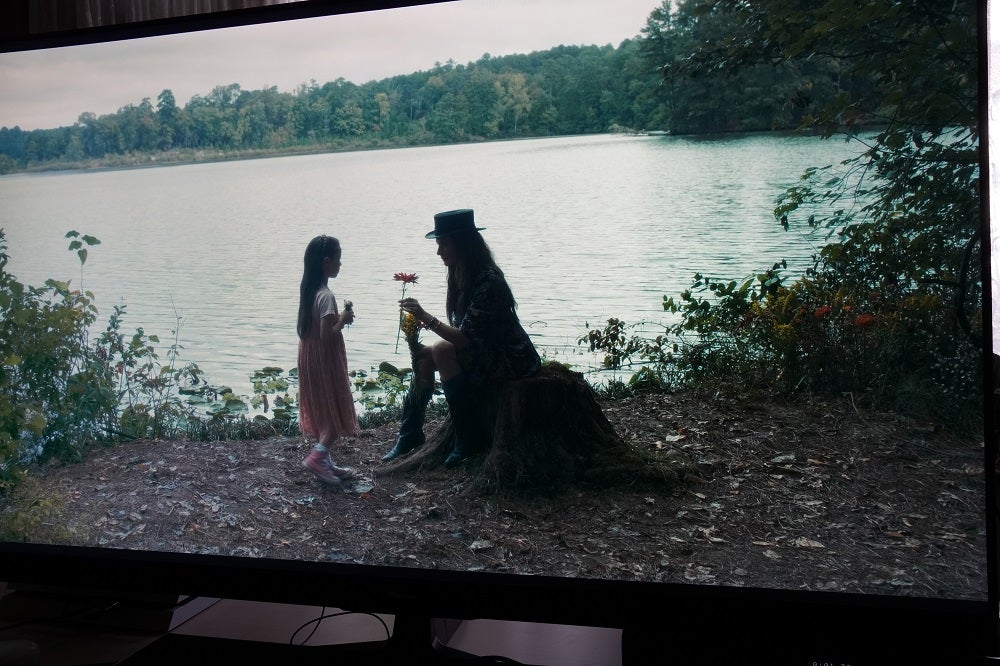 The vivid colours of Pacific Rim bring the Hisense U8Q’s aptitude with colour to the fore. Whites are clean and bright, fine detail is excellent – spot all the nicks and scratches on the Gipsy Danger jaeger – and the bright and vibrant palette of the film is well handled. The intensity of the colours; the reflection of the city lights on Danger – it all looks great in 4K HDR. 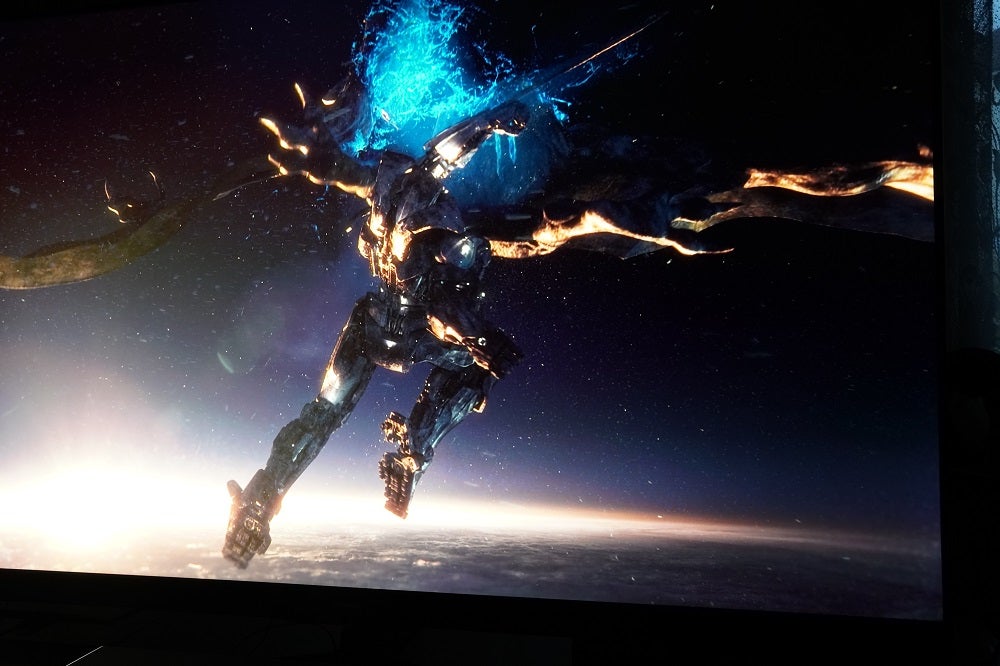 Black levels are solid from a head-on position but move off-axis and colours lose their potency and blooming becomes more noticeable. Backlight bleed can become an issue with HDR content into the black bars above and below content. 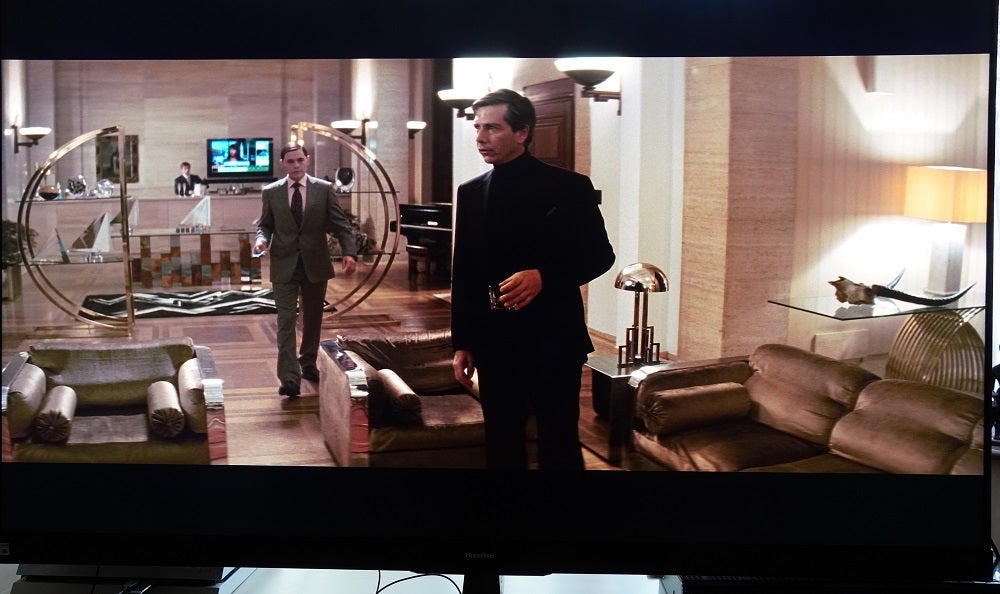 One thing to add is the Hisense U8Q doesn’t seem to automatically switch into Enhanced mode when it detects a device that can do 4K/60Hz or 4.4.4, 4.2.2, 4.2.0 chroma sampling. Head into the menu settings for whichever HDMI port the device is connected to and switch it on. 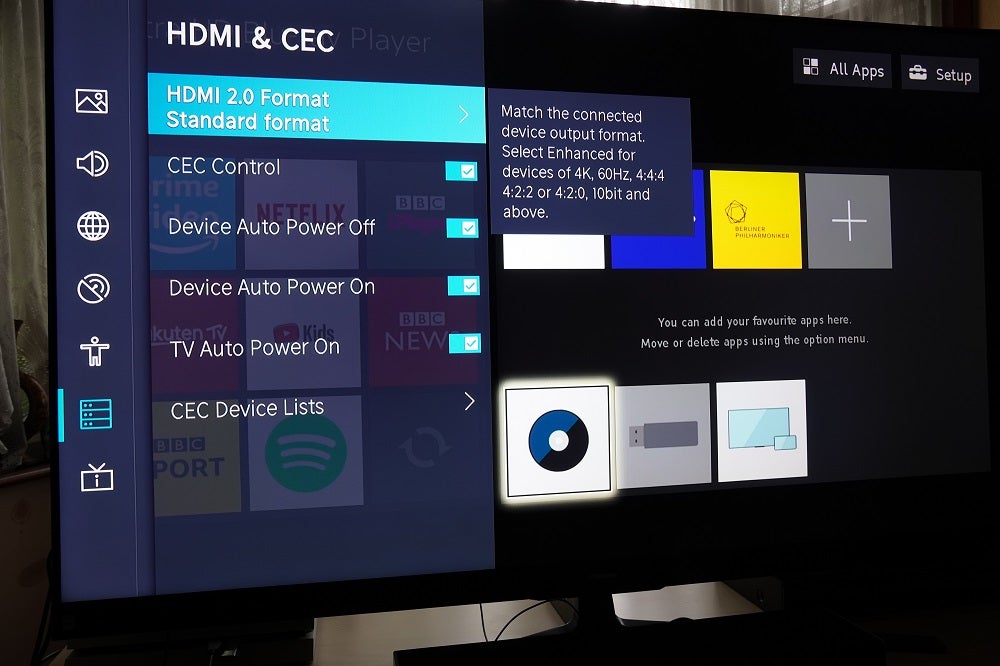 Playing The Dark Knight Rises’ 5.1 track through the front-firing speakers and it does a decent job. Tom Hardy’s vocalisation of Bane stands out, and there’s decent dynamic range and placement of effects. There’s not much bass to speak of – the reverb of Bane’s voice to the various punches, kicks and explosions lack heft – but treble and midrange frequencies are capably handled. 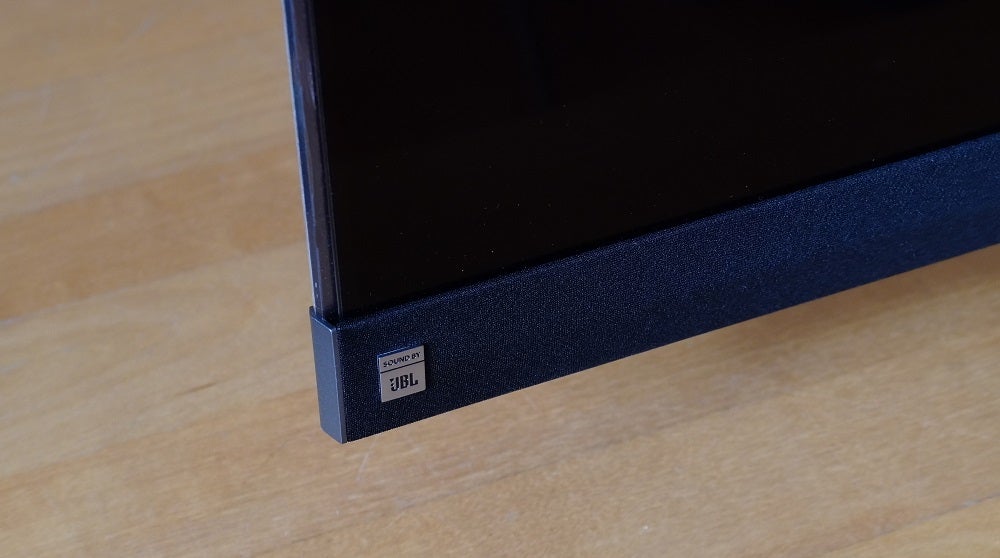 In the Standard mode the speaker’s delivery is deliberately flat. I think it works well. Vocals are prioritised and it’s easy to understand what’s being said. It’s not particularly wide or tall, but the Theatre option is there for a more expansive presentation. Vocals, however, are less emphasised.

Funnel Dolby Atmos content – the Brad Pitt-starring Fury – and it sounds more expansive, taller and with more depth, if not much width. There’s still a tendency for the audio to stay rooted to the lower half of the screen though. For daytime TV this is fine, for anything more, consider a soundbar.

You should buy the Hisense 55U8QFTUK if…

You shouldn’t buy the Hisense 55U8QFTUK if…