An all Originals lineup in 4K HDR makes for an interesting counterpoint to other video streaming services, but the relegation of TV+' status in Apple TV app does not help in discovering what it offers, nor does the lack of support for some popular devices (particularly game consoles). For existing Apple users it's a nice addition, for others it's not yet the compelling narrative it wants to be

Apple TV Plus is the tech giant’s video streaming service, one of several vying for attention in Netflix, Prime Video, Now TV and Disney Plus.

When Apple TV Plus launched in November 2019, it drew a mixed response from observers. At £4.99 it was affordable, but to some, the price masked the service’s lack of content.

While Apple TV Plus is flawed, some aspects work, including its all-original approach to stories. Assessing the service several months after launch offers some perspective on what’s fast becoming a crowded space for video streamers.

One of the missives fired at Apple TV Plus was that there was not enough content. It seemed harsh considering Netflix and Prime Video served up less at their respective launches.

Apple TV Plus began life with eight series in Dickinson; Helpers, For All Mankind, Oprah’s Book Club, Ghostwriter, Snoopy in Space, See and The Morning Show and one film/documentary in The Elephant Queen.

At the time of review that’s grown to 14 with Servant, Truth Be Told, Little America, Mythic Quest: Raven’s Banquet, Visible: Out on Television and Amazing Stories added. 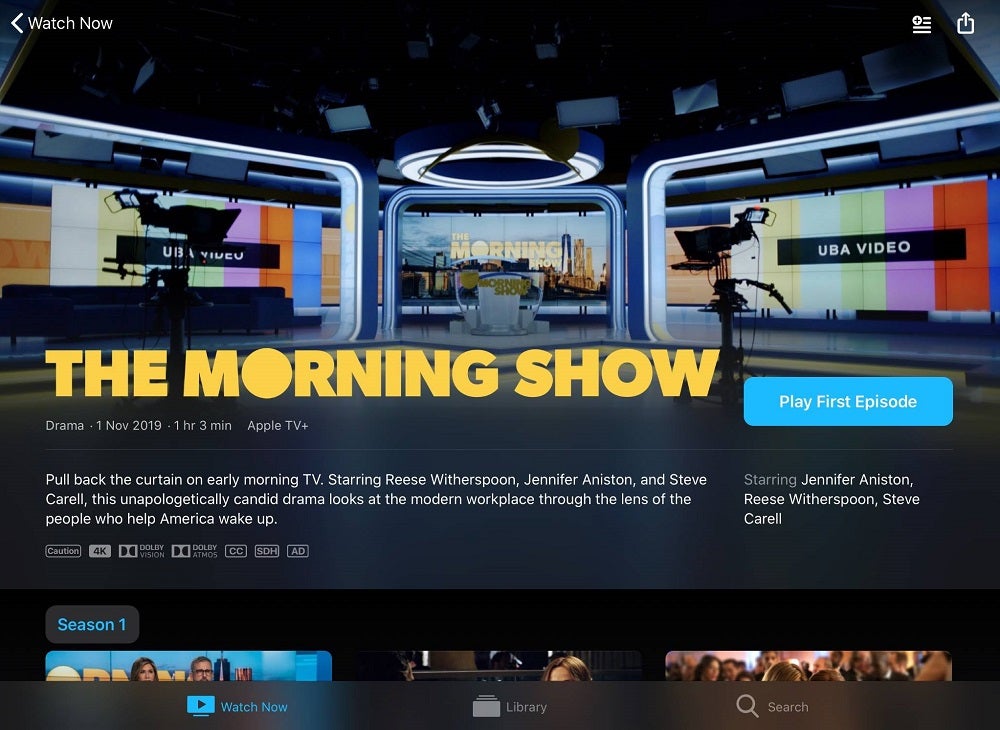 Netflix’s Originals started with House of Cards at launch, followed by Hemlock Grove and Orange Is the New Black in 2013. Prime Video offered three in its first year in Bosch, Hand of God and The Man in the High Castle, so it seems churlish to moan about Apple TV Plus dropping eight shows on day one.

Not all of Apple TV Plus’ content will be to viewers’ liking though, and unlike Netflix and Prime Video, it isn’t supplemented by content included in the subscription.

The line-up is diverse – not as international as Netflix – but does feature a strong roster of talent both in front and behind the camera. The Morning Show eventually finds its groove after a slow start and Dickinson is full of charming performances and an offbeat vibe – the standout being lead Hailee Steinfeld – although its modern anachronisms may grate.

Apocalyptic adventure See is surprisingly compelling; For All Mankind is an interesting ‘What If’ about the Space Race and Little America may be the service’s most endearing show, taking real-life stories of immigrants living in America and dramatising them.

That said there’s nothing particularly innovative, and TV Plus lacks a watercooler-type show Disney Plus had in The Mandalorian or Netflix with House of Cards. What it has offered so far has been entertaining and consistent. The question is whether Apple can build momentum with new releases.

Whichever device I’ve watched Apple TV Plus on, the picture has looked great. For this review, TV Plus has been viewed on Samsung Tizen TVs, Hisense Roku TV, Roku streaming device, Fire TV Cube and an iPad. Quality has been enjoyable across the board with some differences in brightness levels, depending on the device.

Apple Originals are available in 4K HDR, with support for Dolby Vision and Dolby Atmos. 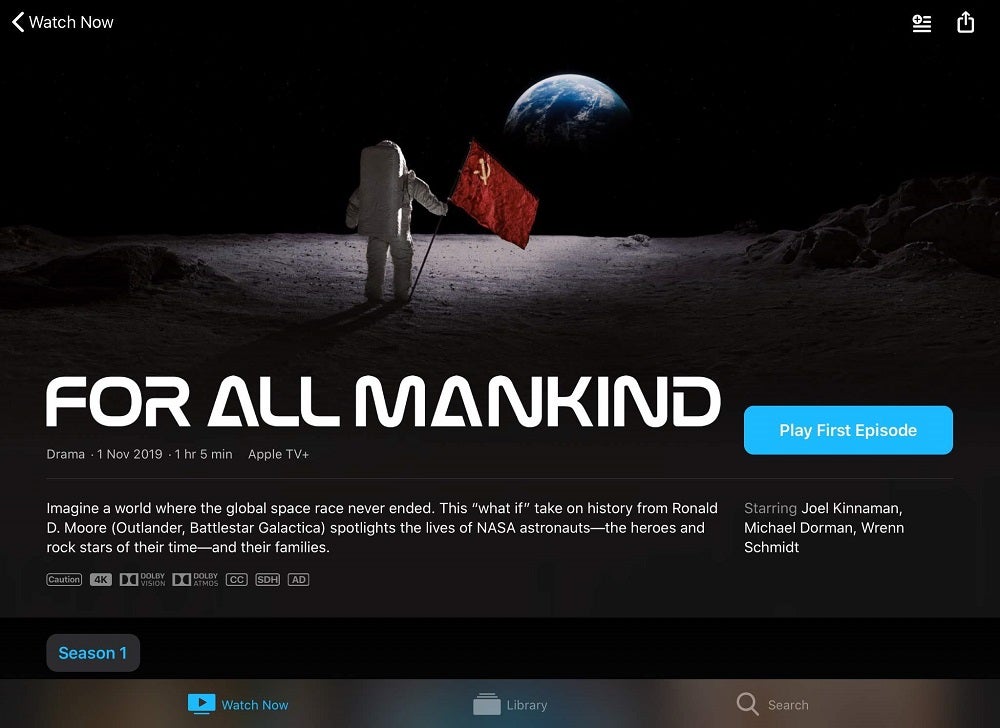 The Morning Show, Dickinson and For All Mankind demonstrate the greatest pop in terms of colours – the crimson red dress Emily wears or the opening titles of The Morning Show stand out from memory, but they’re nevertheless reasonably naturalistic looking productions.

Blacks are deep in For All Mankind and light sources/HDR is used well to create a sense of depth. HDR seems to be subtly used to strengthen colours rather than radically embellish them. Dolby Vision HDR wasn’t viewed for this review.

The digital sheen gives TV Plus productions a clean, sharp and detailed look. Whether it’s the natural landscapes in See and The Elephant Queen or the Manhattan/Los Angeles settings of The Morning Show, it all looks impressively refined.

Viewers would also benefit from a sound system as Atmos is supported in several titles. Action and music are frequently placed in rear speakers, creating a sense of space and distance. The opening titles of See are a great example of using the rear channels immersing the viewer.

Apple TV Plus interface — Easy to use, but TV Plus content feels lost among the various options

You can’t talk about Apple TV Plus without mentioning the Apple TV app. TV Plus is contained in the main TV app, but it doesn’t have its own section.

Instead, TV Plus is given prominence in the ‘Watch Now’ section, found on the navigation bar at the top of the screen alongside Movies, TV Shows, Kids, Library, Search and Settings (if you’re watching on a TV). 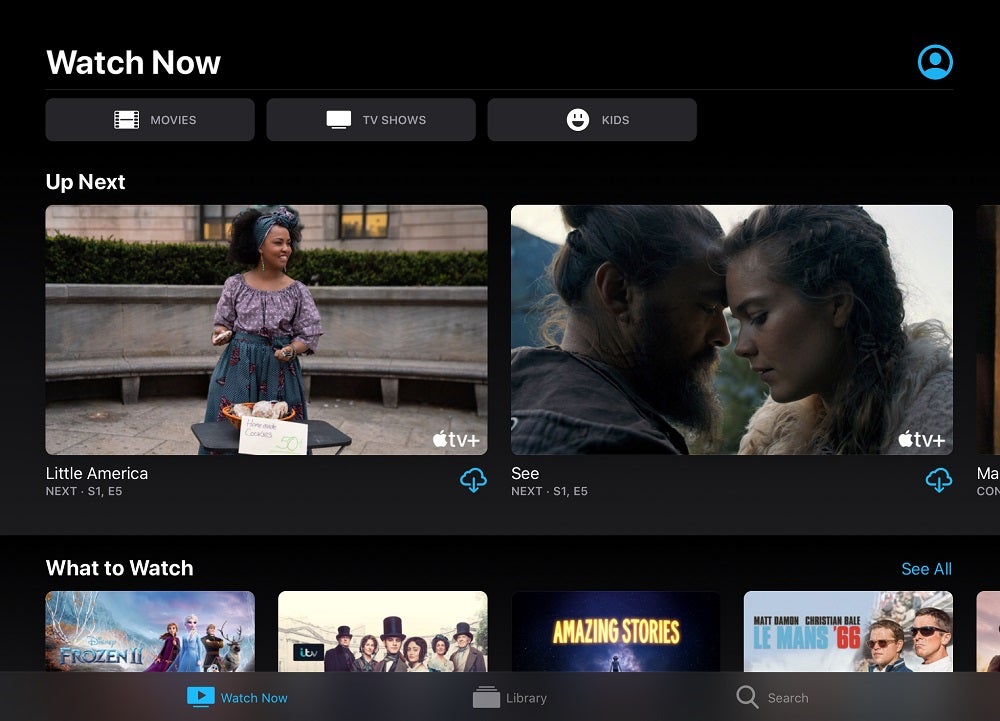 The interface is clean and responsive, as well as being easy to navigate. Like most streaming services, the TV app orders content in horizontal rows.

The first row down is ‘Up Next’, which makes sense as the first thought should be to pick up where you left off. Next is ‘What to Watch’, which offers a mix of curated TV Plus, film and TV content followed by a big scrolling section that spotlights Apple TV Plus Originals. 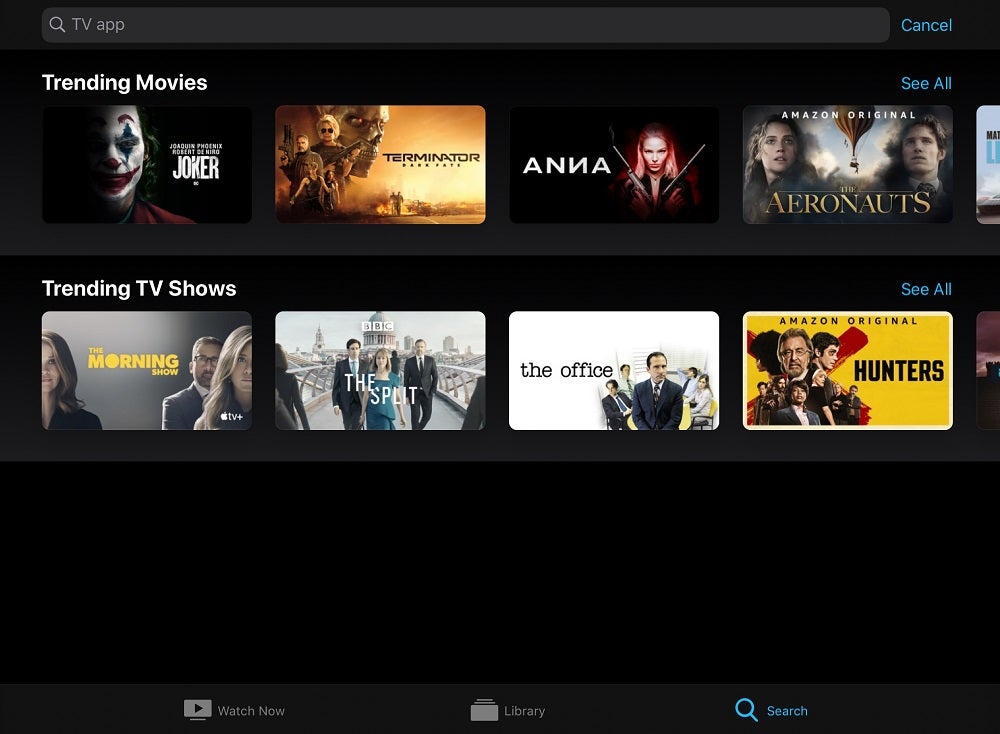 Search is similar to Netflix with a keypad to the left-hand side (for TVs) that makes it quick to type or correct errors. You also get trending movies and TV shows to the side to scroll through.

It’s clear Apple TV Plus is additive to the whole experience, but that makes for muddled integration. If the goal of TV Plus is a Trojan Horse to the TV app where viewers can choose from a more extensive selection of content to rent or buy, then it mitigates the importance of Originals in doing so.

Apple TV Plus Price/platforms — Cheap, but not universally available

TVs with the app that feature the TV app include Samsung’s Tizen OS (2018 onwards) and Roku TV (or the Hisense Roku TV in the UK).

LG said the app would feature at launch for its 2020 models. In February 2020 the TV app rolled out to LG OLEDs, NanoCell TVs and selected UHD TVs. LG’s 2018 models are due to get it later this year. Select Sony and VIZIO TVs are expected to receive it later this year, but no models have been specified. 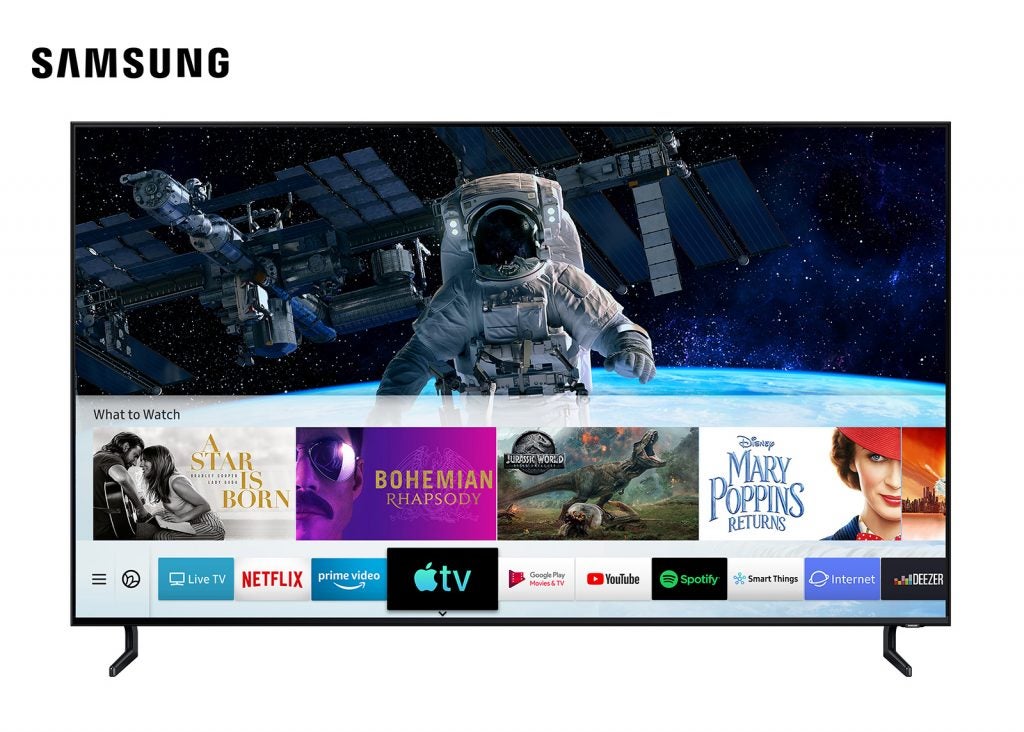 Although Apple claims the TV app is everywhere, PlayStation and Xbox consoles are conspicuous by their absence. Other TVs in Panasonic, Philips and Hisense TVs aren’t supported either.

Content can be viewed offline with one subscription offering six simultaneous streams. The TV app also supports the resumption of content across devices. There did appear to be some issues with synchronisation of playback and the Up Next tab across multiple devices at launch, but both seem to be resolved. 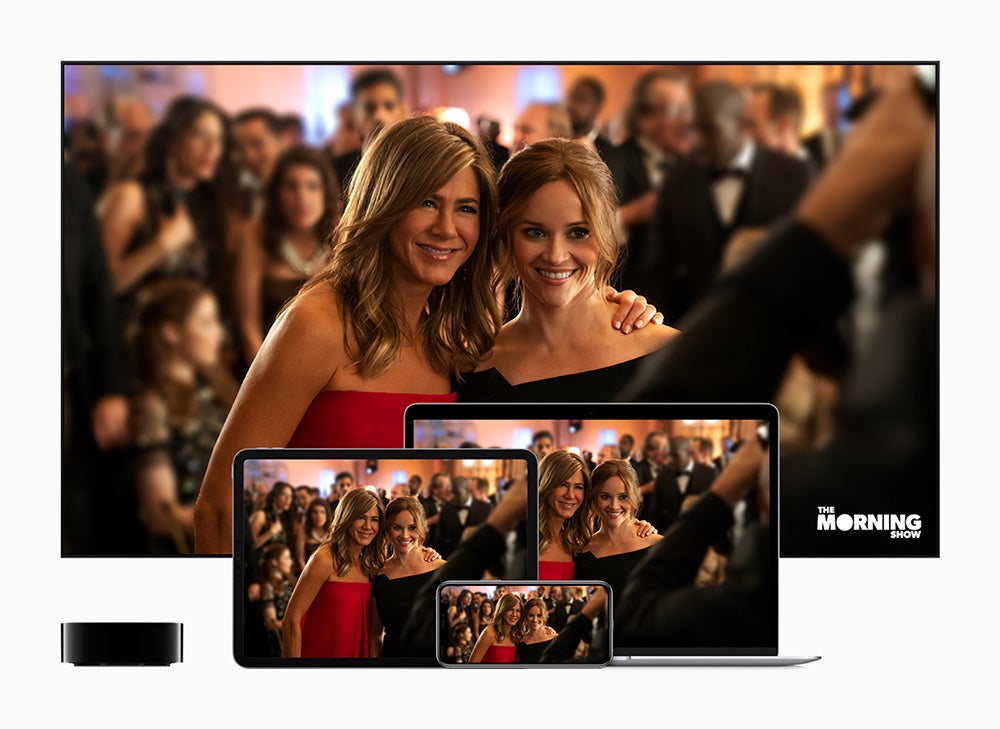 Apple TV plus costs £4.99 a month after the seven day free trial period has elapsed. That’s cheaper than either Netflix, Amazon or Disney Plus. However, TV Plus has less content and doesn’t include content from other sources in its subscription. Instead, you’ll have to pay to buy or rent anything not included in the TV Plus sub.

For anyone who purchases a new iPhone, iPad, Apple TV, Mac or iPod Touch gets a year of Apple TV Plus free, and you have three months from device activation to get it.

If you’re immersed in the Apple ecosystem, TV Plus serves as a good addition. For everyone else, Apple TV Plus hasn’t built up a compelling narrative just yet.

This may sound familiar for an Apple product, but unless you’re already in the Apple ecosystem, there’s no compelling reason to get Apple TV Plus. It’s made its own niche with star-studded dramas and slick production values, but it is a niche.

It looks great and sounds excellent; has support for Dolby Vision and Atmos and costs £4.99, which makes it a lot cheaper than Netflix’s 4K tier.

It’s up against established players such as Netflix and Prime Video, not to mention Rakuten TV and NOW TV. Compared to Disney Plus, it has a head start in original programming, but Disney has 100 years of history to bank on. If you want a wider selection of content to view, then you should look elsewhere.