A 58-inch TV for £349 is surely too good to be true? Offering solid picture and sound, a good selection of video streaming apps and Dolby Vision HDR support, the Toshiba U29 puts in a decent performance for an affordable price

The Toshiba 58U2963DB is the TV brand’s affordable 4K HDR set with support for Dolby Vision.

After a spell on the sidelines, Toshiba made a comeback in 2019 with a brand new range of budget 4K TVs. However, the results of its attempt to bring cutting-edge tech to a broader audience felt as though Toshiba had tried to run before it could walk again, evidenced by a design that was stuck in the past with a shaky implementation of its newest features.

So it’s with slight trepidation that we turn our eye to the brand’s latest TV, the U29. The Hisense Roku H50B7120UK demonstrated that a budget model needn’t sacrifice much in the way of quality. Can Toshiba achieve something similar?

Toshiba 58U2963DB design – Decent build quality, despite the use of plastic

The Toshiba 58U2963DB’s design is less about style and more concerned with practical considerations. It’s use of plastic is par for the course for a budget TV, but it’s a tidy, efficient looking set that’s slimmer than you might expect. The TV supports wall-mounting, but the VESA bracket kit must be purchased separately. 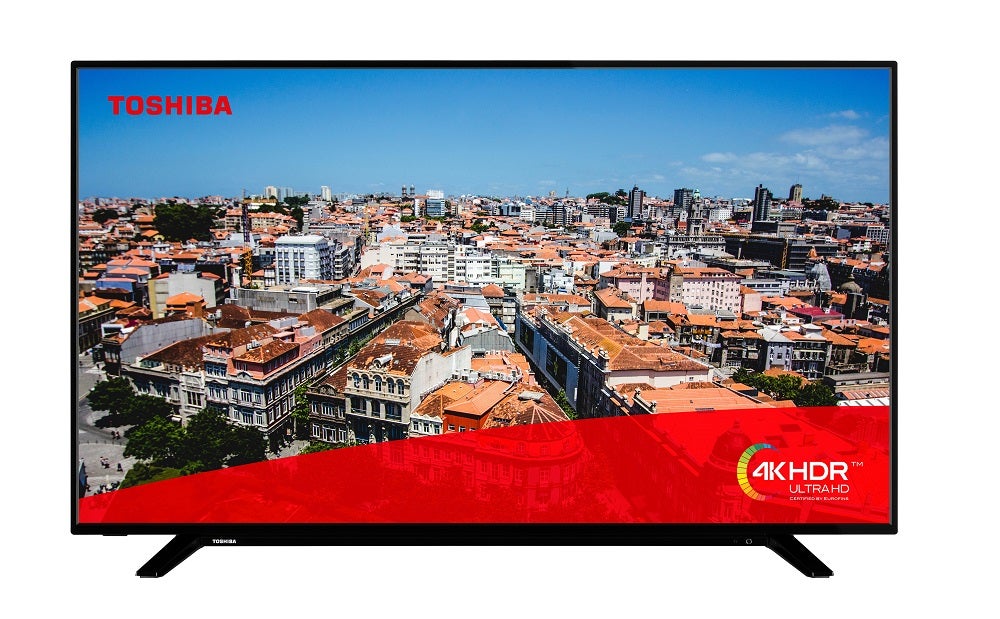 Assembly is a process of screwing in the feet, although it isn’t clear from the instructions which foot is meant to go which side. The feet don’t allow for as much clearance as a central pedestal, so there’s unlikely to be sufficient space to place a soundbar in front without blocking the IR signal. Again, this is a set where the feet can only be placed towards the edge, so those with a smaller rack for a TV take note. 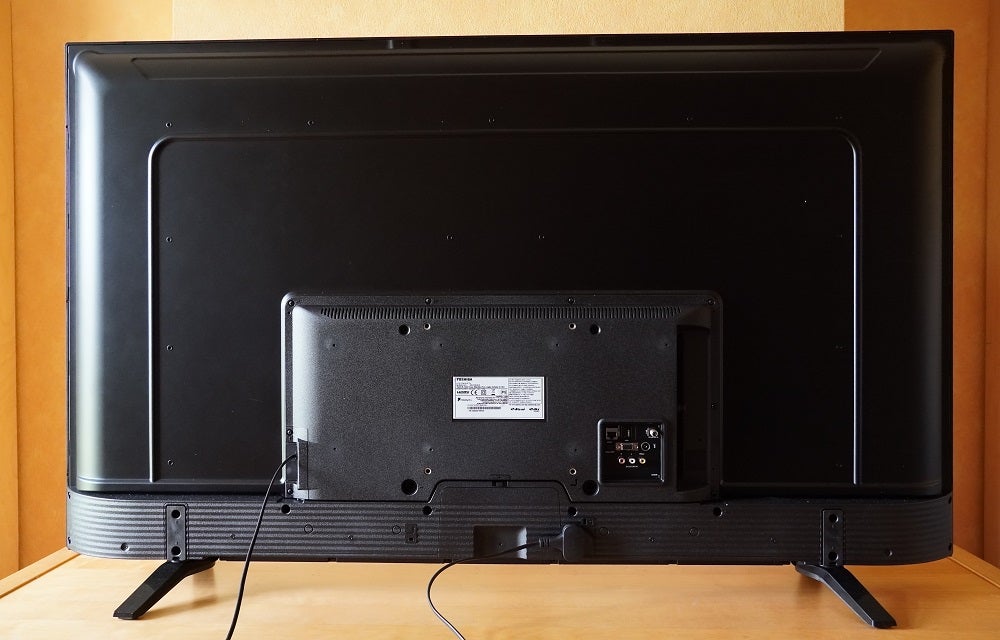 The TV comes with three HDMI ports, as well as other connections including an optical out, 2 x USB 2.0, satellite and TV antenna, headphone out and a common interface slot, along with VGA and composite connections for legacy equipment. Toshiba’s HDMI inputs support the CEC standard for control of other connected devices via the remote, and HDMI 2 is the ARC connection for sending audio to external audio equipment.

There’s built-in Wi-Fi, and if you need a wired connection, then there’s an Ethernet port too. You can plug in a HDD via USB to record programmes or watch any content on it with the media player, but you can’t resume content you’ve exited since the TV won’t remember where you last left off. 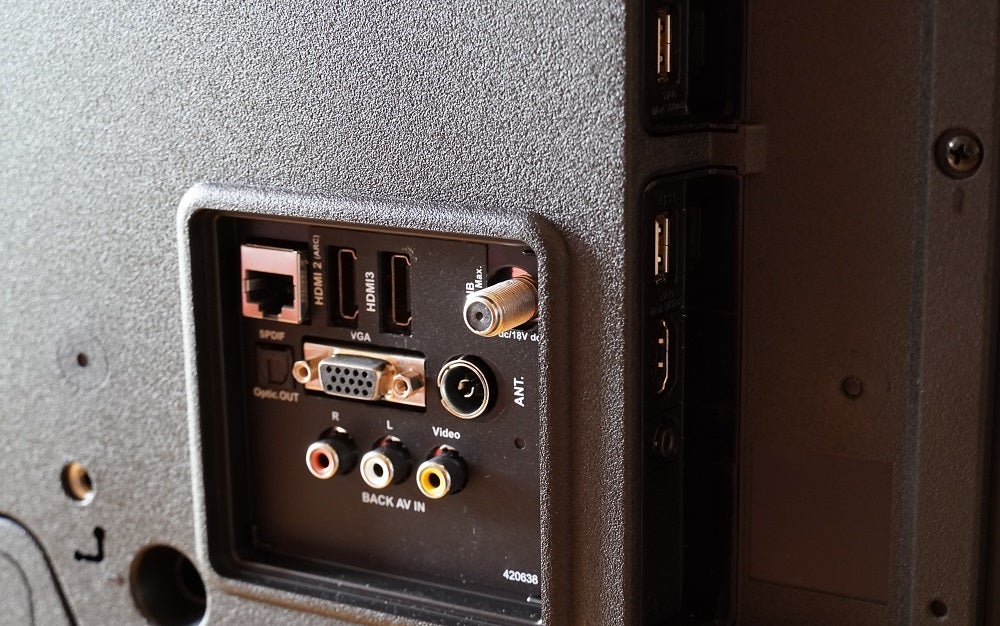 Toshiba continues to back Alexa voice control, although it’s the “Works with Alexa” variety that requires an external speaker. The company recently made a splash with its Toshiba Connect accessory for hands-free Alexa, but there’s no sign of it in its newest range of TVs. If you’re looking to share content to the TV via Chromecast, the Toshiba 58U2963DB doesn’t support it, nor does it support Bluetooth. 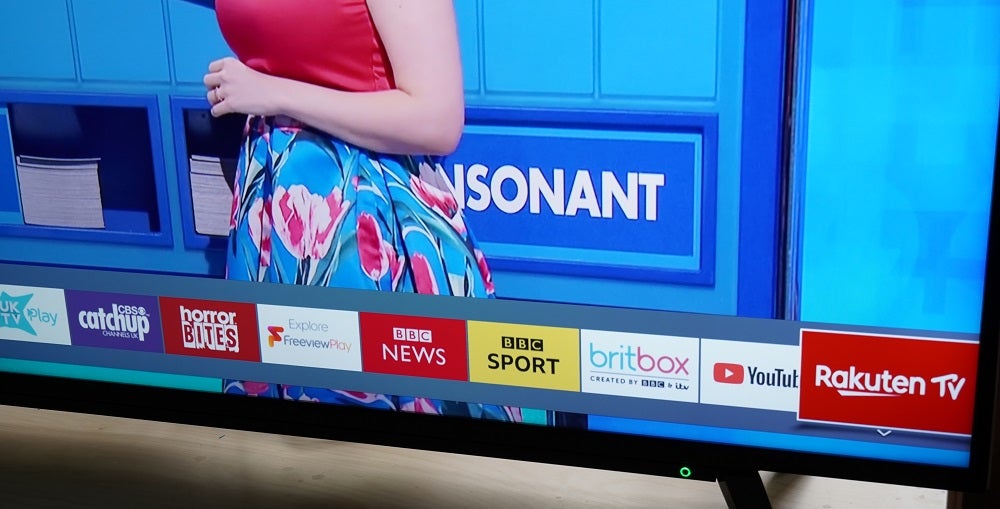 However, the U29’s ambitions to be the added-value choice in the budget market are underlined by its smart platform. There’s no Disney Plus or Apple TV+, and the store is full of apps I’ve never heard of. Nevertheless, the streaming fundamentals are covered with Netflix, Prime Video, Britbox, BBC Sport/News, Rakuten TV and YouTube (in 4K). Since the TV supports Freeview Play, you can throw iPlayer, ITV Hub, All4, My5, UK TV Play and CBS channels Catchup UK and Horror Bites into the bargain.

The menu system is fine, although I do wish the remote had a button for quick access to settings. It’s identical to last year’s model, with buttons for Prime Video, Freeview Play and Netflix. It isn’t the most responsive – nor is the smart platform itself, despite a dual-core processor powering things. Bugs are still apparent: for example, when you’re in an app (say, Netflix), pressing the Home button ends up opening the picture settings instead. 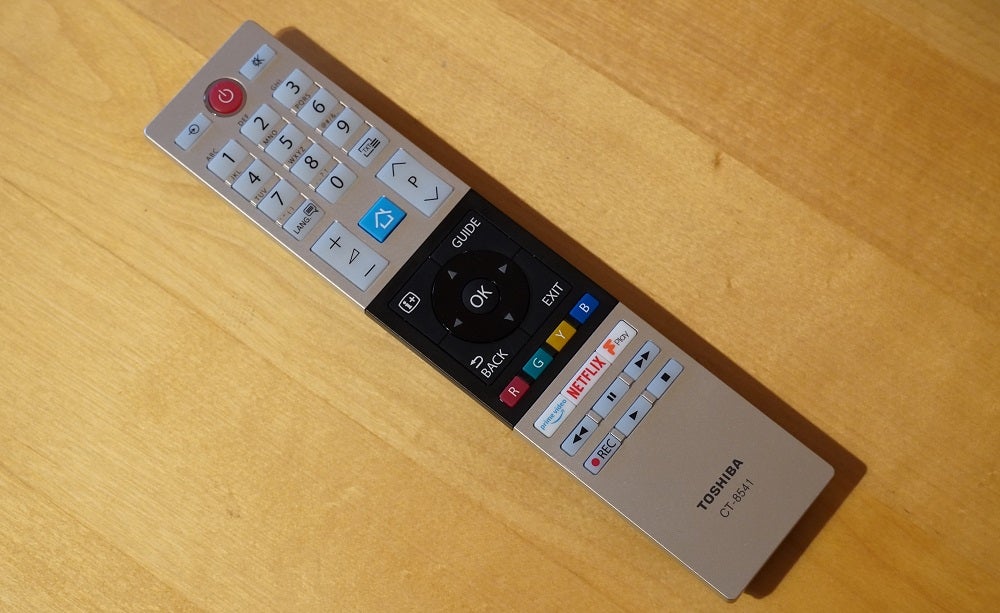 The U29 offers no support for wide colour gamut, but there is HDR10, HLG HDR for Broadcast TV and Dolby Vision HDR. The latter is useful: with brightness in the region of 350 nits, this isn’t a TV that will deliver the most convincing of HDR performances. But with Dolby Vision’s dynamic metadata, which adjusts HDR performance on a scene-by-scene basis, it can at least handle aspects of it in a more astute manner.

In Game mode, latency was measured at 25.7ms. Even with Game mode off, the set measured 25.8ms, so there doesn’t appear to be much difference with it on or off. You’ll have to manually switch Game mode on; the U29 doesn’t auto-switch.

Toshiba U29 performance – Much improved over the UL5, with a solid performance at this price

I remember struggling to wrangle a decent picture out of the UL5. The Toshiba 58U2963DB’s picture quality out of the box is much better and offers a pretty solid foundation, with a few additional tweaks.

Picture modes are a choice of Dynamic, Game, Sports, Cinema, Natural and User, plus their respective HDR versions. Natural seems best suited to the job, with a colourful but refined presentation. Dynamic Contrast and Noise Reduction should be set to medium, with the colour temp at normal for HD content. 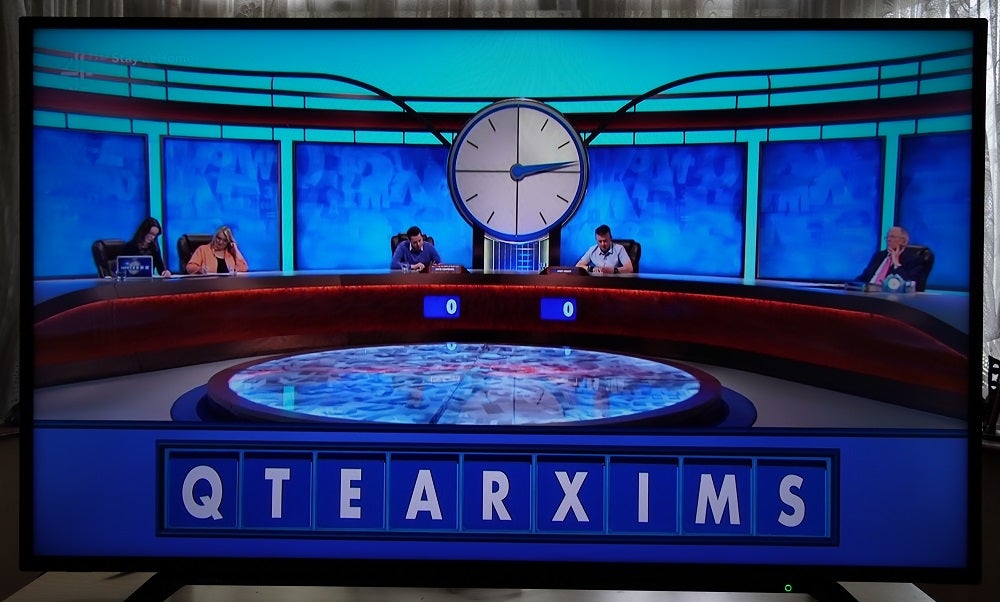 For HDR content, it seems best to set Dynamic Contrast to low; medium and high settings make colours too dark and leech detail out of the whites. Switch Noise Reduction off for 4K – and, whatever you do, turn off Energy Saving since it results in a dreary looking image.

Watching Countdown and A Place in the Sun on Channel 4 HD, the broadcast looked colourful and punchy, but also natural and less prone to oversaturation than it did on the UL5. The blues of the Countdown set have a bit more subtlety and range, and detail is pleasing and clarity fine, even though some faces err towards a waxy look.

The upscaling performance is fine, but you can, of course, expect pricier TVs to be more accomplished in this regard. The U29 at least doesn’t overdo things by making faces so defined they look like they’ve been sandblasted to oblivion.

I’m left unsure as to the obvious benefits of Noise Reduction. The U29 has trouble tracking camera pans and movement in faces, and no amount of NR seems able to resolve this. It’s still eminently watchable, though. 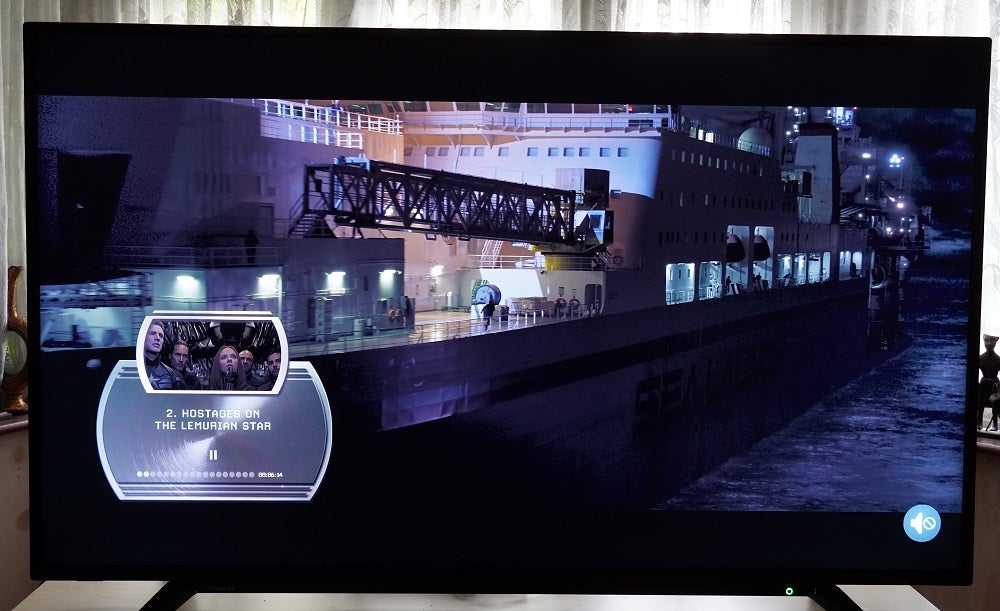 A switch to a 4K Blu-ray of Captain America: The Winter Soldier and performance in dark scenes offer an improvement over the UL5. Cap’s stealthy incursion of the Lemurian Star at night reads better, and colours are more accurate. The scene still lacks pop and is rendered too dark in places, with some black crush evident. Nevertheless, HDR10 performance here is much better than on the UL5.

At this price point, the U29 lacks the brightness needed to do justice to 4K HDR content. But, a viewing of Seven Worlds One Planet on iPlayer is a pleasing enough experience. Comparably, it gives a little sharpness and detail away to the Hisense Roku TV, but colours are solid enough and contrast good enough to make for a solid watch. 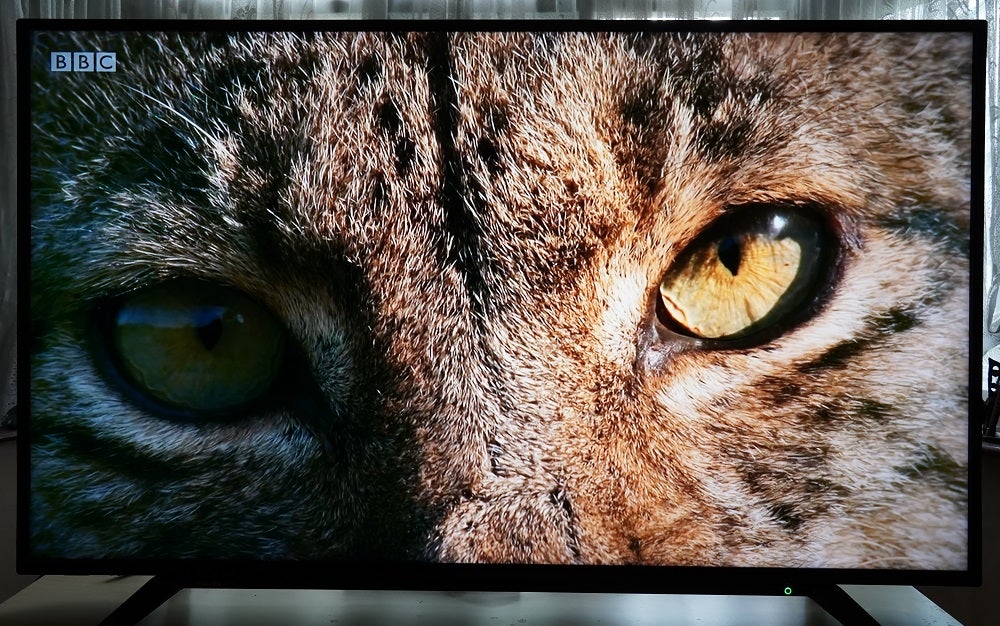 With Dolby Vision HDR there’s a choice of Bright and Dark modes. Dolby Vision settings can’t be changed – but, interestingly (or perhaps not), the colour temp for DV content is Warm, which I don’t think makes for the most revealing image. In Dolby Vision Jurassic Park: Fallen Kingdom, there’s a green tint that’s missing from its HDR10 presentation, and plays of 2001: A Space Odyssey and Aquaman in Dolby Vision benefit from a wider range of colours and more exacting HDR performance. 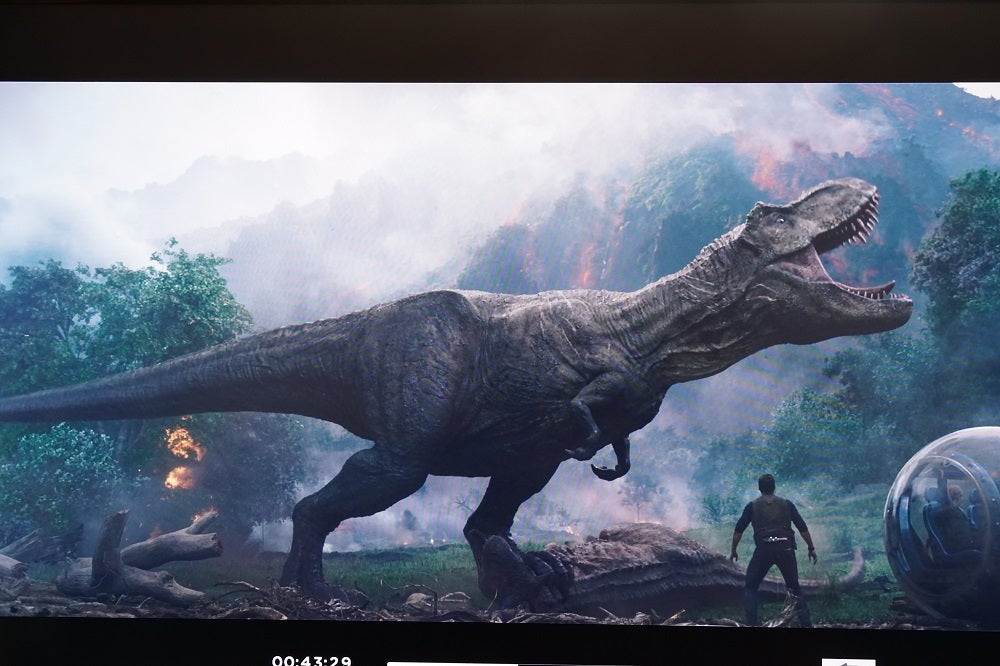 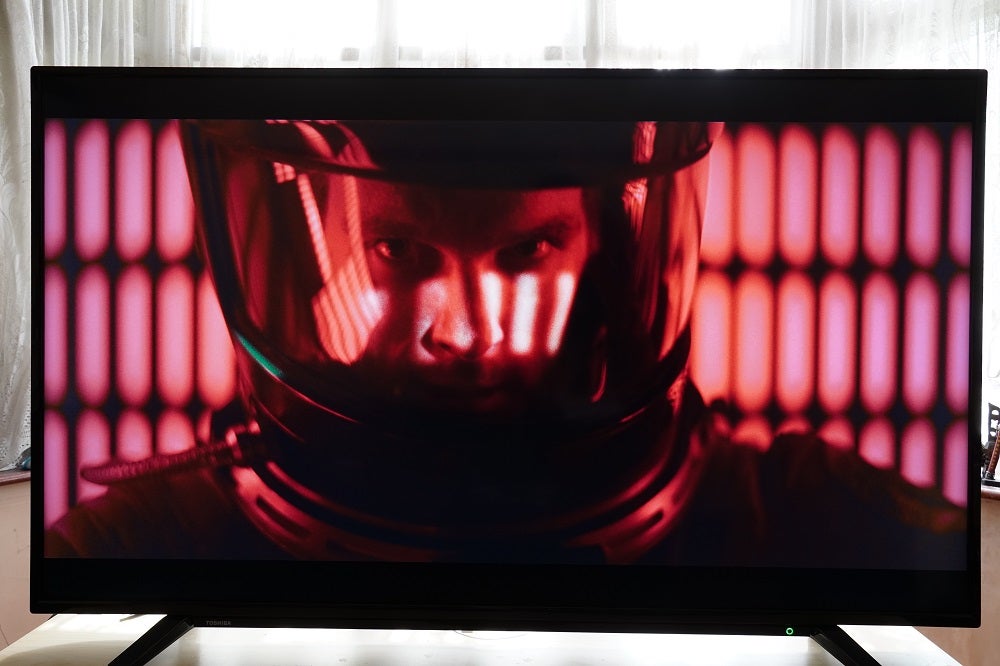 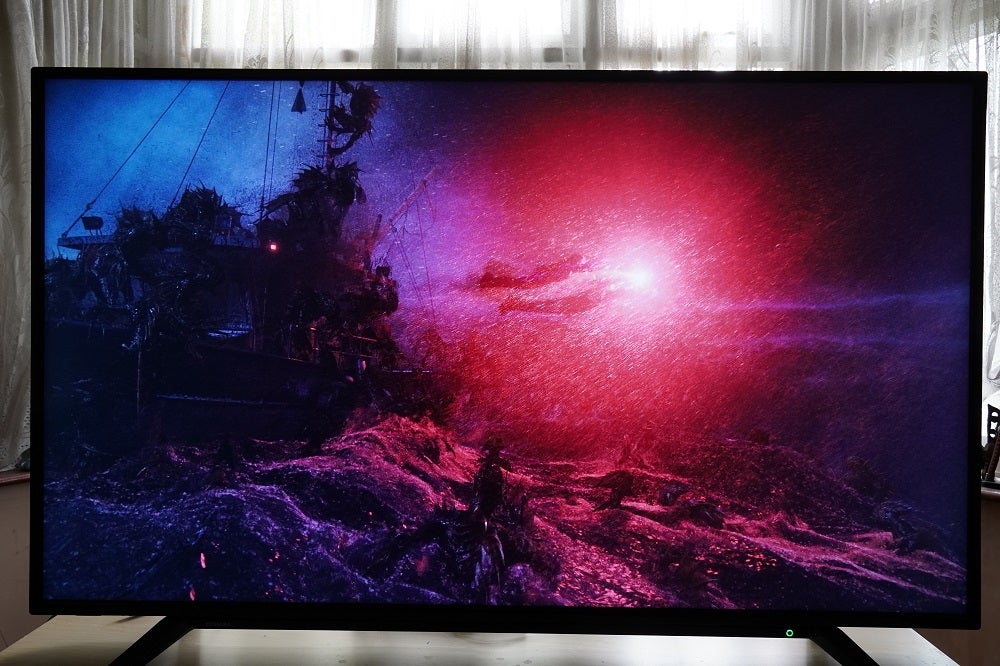 Where the Toshiba U29 does have the edge over the Hisense Roku TV is in its delivery of SD content. Of course, there’s a lack of definition and clarity, but the performance is nowhere near as rough. Viewing angles are rather disappointing, though: you don’t have to move off-axis much for colours to lose punch and intensity.

Watch fast-moving sports such as MotoGP or Premier League replays, and you’ll see some blur, but the Toshiba handles it a smidgen better than the Hisense Roku TV.

There are some minor backlight uniformity issues, with the sides of the DLED panel appearing a little faded compared to everything else. It’s noticeable, but I’d deem it as a slight, rather than major, issue. 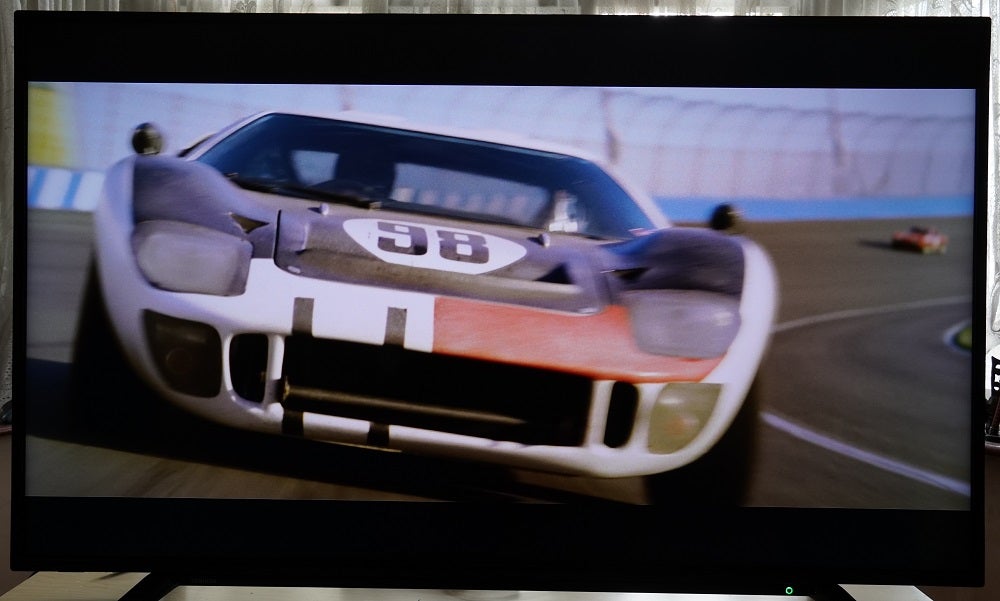 Colours look slightly faded towards the edge of the frame

Sound is provided by Onkyo’s down-firing speakers– and they deliver a decent performance. The sound stage isn’t wide, and it doesn’t have the spacious quality that the Hisense Roku offers. But neither is it shrill or harsh, with decent dynamics and vocal clarity that makes the U29 a good set for daytime TV.

The TV supports Dolby Audio, DTS HD and DTS TruSurround and it’s best to keep the Dolby smart Audio turned on. With it off, vocal clarity falls away, and the audio sounds squashed.

I’d recommend a soundbar to go with the Toshiba 58U2963DB, and if you do go down that road don’t forget to flick the speakers’ setting to Amplifier. The manual that comes with the TV could do with making that clearer (or, in fact, mentioning it all), as you may spend time like I did staring at the TV and wondering why the sound was coming out of both it and the soundbar.

The Toshiba 58U2963DB is a surprisingly good TV, offering good value for its £349 price tag. A price that low can often lead to disappointment, but that isn’t the case here. Aside from the minor backlight issues, the standard HDR performance is improved over the UL5, and Dolby Vision support enhances compatible 4K Blu-ray/streaming content as much as it can.

Audio performance is fairly decent, too, although it can’t match that of the Hisense Roku TV. The Toshiba U29 still has some rough edges, and the lack of more recent streaming apps such as Disney+ and Apple TV+ gives the Hisense Roku the edge in the smart stakes.

Despite those issues, the U29 is a much better realisation of what Toshiba was aiming for with its 2019 range. Hopefully, the company can use this platform as the springboard for bringing big-screen tech to those who can’t afford pricier options.