Everything you need to know about the HTC One M9 Plus

The HTC One M9 has only just entered the realms of reality, yet murmurings of an inbound, oversized sibling have already started to rumble.

According to recent reports, the HTC One M9 Plus will hit retailers in the coming months following an early April unveil. The handset will touch down as a larger, 2K display-hosting spin-off to the Taiwanese manufacturer’s latest flagship offering and Galaxy S6 challenger.

Shaping up as the device the flagship M9 should have been, the M9 Plus is expected to offer significant specs improvements over is iPhone 6 rivalling sibling. It will be the company’s answer to the iPhone 6 Plus and the Samsung Galaxy Note 4.

With reports hinting the handset could hit European markets within a matter of weeks, HTC has confirmed the device will be officially unveiled at a dedicated, Beijing-based launch event on April 8. Despite this, an in-store HTC One M9 Plus release date is still shrouded in much mystery.

We will continue to update this post with all the latest HTC One M9 Plus release date info, leaks, news and rumours as new details emerge. Bookmark the page now to be kept in the loop.

Watch our HTC One M9 hands-on video for a glimpse of what the Plus could offer.

HTC One M9 Plus Release Date

The standard One M9 will hit only retailers on March 31, but that doesn’t mean HTC is holding off with its first M9 spin-off.

Sending out invites for a ‘More than One’ branded launch event (below), the Taiwanese manufacturer has hinted the handset will be formally unveiled on April 8. 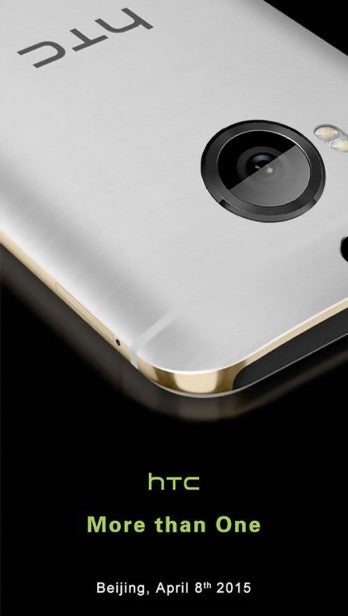 While early April will see the phone announced, we can’t see the handset hitting retailers straight away.

In the past, HTC has given its flagship phone a number of months’ breathing space before throwing a series of spin-offs into the fray.

Last year the HTC One M8 hit retailers in March, with the company’s ‘mini’ branded alternative touching down in May. Similarly, back in 2013, the One M7’s spring launch was backed up by the arrival of the HTC One Max in October.

HTC might be remaining tight-lipped on the M9 Plus’ release date, but that doesn’t mean we don’t have some idea of when to expect the phone.

According to serial, and oft reliable, Twitter-based tech tipster @Upleaks, the phone will go on sale either during the tail end of Q1 or in early Q2.

Given that Q1 ends when the M9 hits sellers on March 31, we can now rule this out. A Q2 launch appears to be a far more fitting timeframe.

The M9 Plus is unlikely to be the company’s only M9-themed spin-off either.

It is currently unclear whether or not these two devices will share the same launch stage. Given the flurry of rumours circling around the M9 Plus, we would expect to see the oversized sibling before the peewee offering. 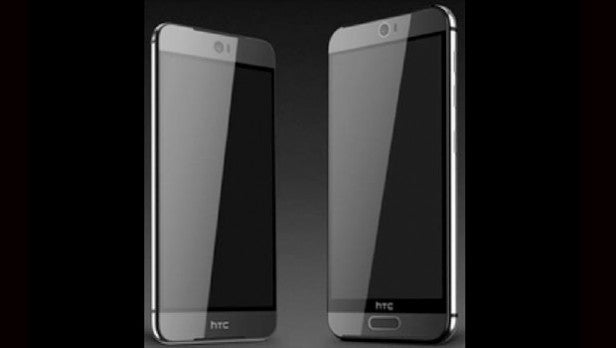 HTC One M9 Plus News

The will-they, wont-they back and forth around HTC’s M9 spin-off plans looks to be increasingly pointing in the will-they direction. What’s currently unclear, however, is exactly how the phone will be referred to.

The ‘HTC One M9 Plus’ moniker has garnered much of the early vote, but recent claims have suggested the phone will actually be dubbed the ‘HTC One M9+’ come launch.

“Confirmed: Hima Ultra will be going to the market as HTC One M9+ (not Plus), and I was wrong it will be available in EMEA too,” insider @Upleaks recently tweeted.

Naming discrepancies aside, HTC has actually been quite forthcoming with details on its upcoming phone.

As you can see from the event invite above, the manufacuturer used the launch announcement to offer a tantalising glimpse of what’s to come.

So, what can we tell from the invite image? Well, like the M9 before it, the M9 Plus will feature a sleek, two-tone metallic design with a softly curved back.

More interesting, however, is the return to the duo-lens camera seen on last year’s HTC One M8. Teased in the image is a large, round camera sensor topped by a small second lens which will help the phone’s camera better judge depth.

It has also been suggested that the handset will follow its sibling into the similar exclusive circles.

Given that HTC recently unveiled its phone replacement service – HTC Uh Oh – for US-based M9 owners, it’s expected that the service will also be offered to eventual M9 Plus users.

HTC Uh Oh is a complementary service that replaces your damaged or broken M9 for free once during the first year of ownership. At present, the service is only available stateside, with no word offered on a planned UK or European release. 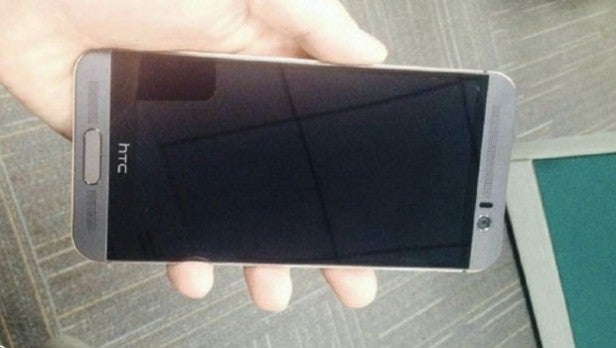 HTC One M9 Plus Rumours

So, what can we expect from the HTC One M9 Plus? Well, according to latest rumours, quite a lot.

The M9 might have been a bit of a wet lettuce when it came to specs advancements, but its big brother looks set to avoid similar such shortcomings.

According to countless leaks and rumours, the big draw on the One M9 Plus’s specs sheet will be the addition of a 2K display. Having overlooked the visual refinement for its flagship phone, HTC is tipped to bestow an LG G3 and Galaxy S6 Edge rivalling display on its next high-end handset.

A number of separate sources have all suggested the M9 Plus will adopt a 2560 x 1440 pixel QHD display, although exact sizing is still unclear. While some reports have pointed towards a 5.2-inch display getting the nod, further reports have claimed a 5.5-inch screen is on the cards.

At present, the move to a 5.2-inch panel is looking the more likely. Although only a small size bump on the M9, this redesign would see a larger display included alongside further additions, without increasing the handset’s overall footprint too much.

HTC has cast shadows of doubt over such an eye-popping addition, however.

Speaking exclusively with TrustedReviews around the One M9’s launch, the Taiwanese manufacturer suggested that 2K panels aren’t always worth the compromises to other aspects of the phone, such as battery life.

“With another screen technology there might be a flip side such as power consumption. It might be boring to talk about, but if you want the best possible battery experience then there’s a balance to make between other elements of the phone.”

Despite backing up Frolund’s thoughts, Graham Wheeler, Director of Commercialisation and Product Management at HTC, offered a glimmer of hope for a 2K M9 Plus, suggesting 2K screens can provide a benefit on larger devices.

“You’ve got to look at the device and how people use it,” he said.

“It’s not to say we’ll not do a 2K screen for sure because we’ll review that for every device.”

Despite muddying the waters of belief, HTC’s comments seem little more than a means of defending the M9’s lacks of a 2K panel. We would be hugely surprised if the M9 Plus didn’t adopt the latest screen advancements. 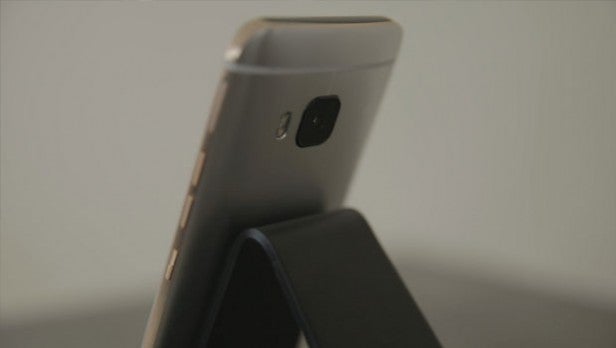 HTC One M9 Plus Specs

The handset’s much-mooted 2K screen might steal the headlines, but it is far from the only major specs improvement tipped to feature on the future phone. Bringing HTC’s flagship propositions on to parity with those from Apple and Samsung, the M9 Plus will reportedly add an integrated fingerprint scanner to the mix.

An omission from HTC’s past flagship phones, the industry-wide push into biometric security measures has seemingly forced the move on the Taiwanese manufacturer. Unlike the fingerprint reader found on the HTC One Max, the M9 Plus looks set to move the sensor up front.

Leaked images have shown an elongated physical home button towards the bottom of the phone’s face side. This sensor incorporating control echoes that seen on the S6 and has forced HTC to alter the positioning of its BoomSound stereo speakers.
This isn’t the only alteration to the Plus’ features list over the M9, either. Doing away with Qualcomm’s latest 64-bit Snapdragon 810 chipset – a unit repeatedly marred by overheating concerns – HTC will reportedly move to a 2.0GHz, octa-core MediaTek processor.

Performance wise it is currently unclear how much of a difference this will make to the device, although stepping away from the Qualcomm chip should help reduce costs.

There will be a number of similarities between the two devices, too. From a Sense 7.0 skinned version of Android 5.0 Lollipop to 3GB of RAM, the M9 and M9 Plus are shaping up as kindred spirits.

As previously mentioned, the return to a duo-lens camera also appears to be on the cards.

Having been officially teased by HTC’s invite, this novel addition has also been spotted on a selection of leaked handset renders (below). Shown alongside the flagship M9, you can clearly see the small size difference and hardware alterations between the two devices.

Like its sibling, the M9 Plus will also retain HTC’s high-end metal designs, with a curved, two-stepped body to be offered up in a range of metallic tones. 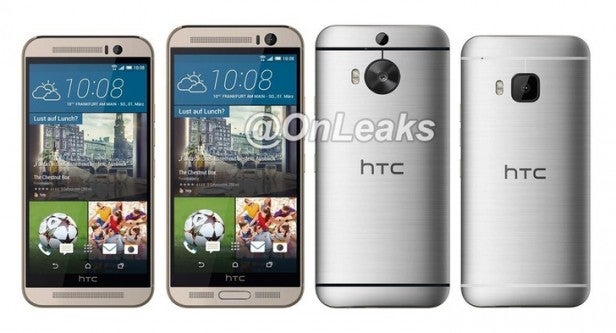 HTC One M9 Plus Price

If the mooted One M9 Plus’s specs sheet is accurate, and we have no reason to doubt it at this stage, the handset won’t come cheap.

At £580 SIM-free, the HTC One M9 is already one of the more expensive devices on the market. Add a 2K screen, larger metal body and an integrated fingerprint scanner into the mix and that asking price is surely set to rise.

Whether the handset will echo the £619 iPhone 6 Plus cost or £760 asking price of the Samsung Galaxy S6 Edge remains to be seen.