As you would expect of a projector costing the eye-watering amount of £10,995, Vivitek’s H9080FD is no ordinary projector. In fact, it’s a world’s first. For no other 1080p home cinema projector before has been built around LED lighting.


This is pretty startling news as our experience of projectors that use LED lighting has been that they’re extremely low on brightness, and have thus only found a home within ‘convenience’ products, such as pocket-sized Pico projectors. Yet Vivitek claims that the H9080FD’s LED modules should – and I quote – “give the viewer an impression of a much higher video brightness than those projectors with a conventional mercury lamp”.


What’s more, the immediate full brightness response of the LED module means that the H9080FD can claim an instant on/off feature, with none of the tedious waiting around for bulbs to warm up or fans to cool lamps down that you get with conventional projector lighting.


There are other claimed advantages of the LED lighting system too. Particularly striking is a claimed 20,000-hour LED module lifespan. That’s around 10 times longer than the lifespan quoted for your average mercury lamp, and goes some way to justifying the projector’s cost given that you won’t be investing in lamps as regularly as you would with a ‘normal’ projector. 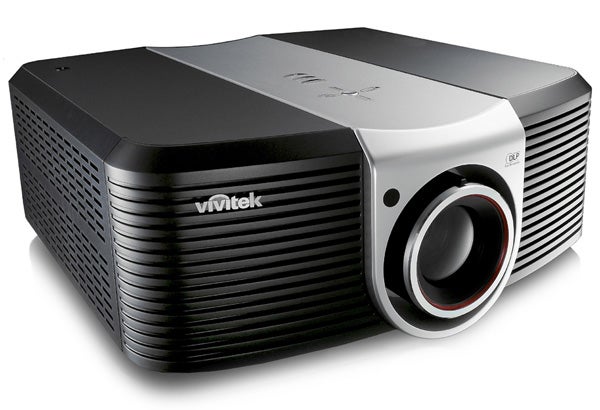 Another important performance benefit of the LED lighting engine, meanwhile, is the way it can drive the DLP DMD device without any need for the usual DLP colour wheel. In fact, since they’re able to switch 30A on and off in one micro second, the LED driver algorithms Vivitek has developed for the H9080FD can switch the currents to each of the projector’s three LEDs so fast that the effect is equivalent to a 20x DLP colour wheel!


Doing away with the traditional DLP colour wheel should also reduce operating noise, and abolish the dreaded ‘rainbow effect’ (RGB colour striping) that colour wheels tend to cause.


The LED driving algorithm Vivitek has created for the H9080FD is also claimed to do away with the need for another mechanical part of a standard projector: the dynamic black shutter. Despite this, the projector still claims a huge contrast ratio of 100,000:1.


There’s also another claimed benefit of the H9080FD’s LED lamp system, and that’s its power consumption. For apparently it consumes just 175W or so when running with the optimum settings for film viewing.

So far, everything the H9080FD is claiming is a million miles away from any previous LED projection story. And this trend continues – with knobs on – when it comes to the H9080FD’s design. Instead of being some ultra-portable projector, the H9080FD is ruddy huge – possibly the largest projector I’ve ever had perched on my projector stand, in fact.


Not surprisingly this makes it rather dominant in your room. But Vivitek has at least had a passable go at ‘sexing up’ its leviathan, thanks to a nice silver section around the lens and down the centre of the projector’s top side, which stands in stark contrast to the general matt black of the rest of the chassis. There’s a distinctive blaze of red around the lens zoom/focus controls too, if you want a bit of colour in your life.


Setting the H9080FD up is a largely straightforward experience. For starters, the simple zoom/focus ring around the lens is reasonably sensitive and robust, with the level of zoom available being a respectable – though certainly not amazing – 1.3x.


If you’re worried about this zoom range potentially limiting the H9080FD’s ability to deliver the right sized image for your particular room, though, fear not. For the projector has two lens options available: a 1.56-1.86:1 option, and a 1.85-2.40:1. And optional zoom adaptors extend this range to 1.24-3.0. 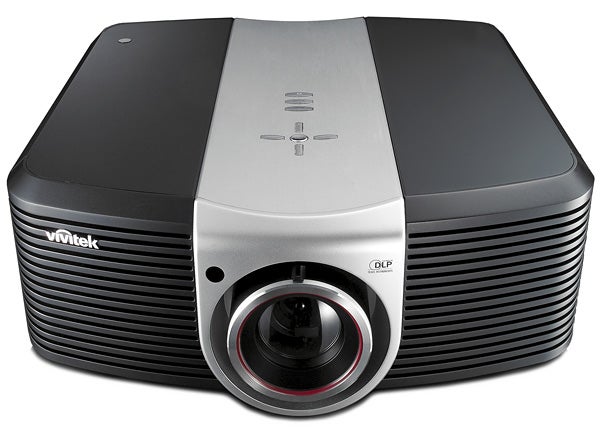 The projector also permits 120 per cent vertical and 30 per cent horizontal image shifting – a potentially invaluable aid to getting the image in the right place in your room. Though it’s a pity you can only access this via a hidden screw mechanism that can only be turned via a provided wrench.


The onscreen menus, meanwhile, are clean and logical, and sensibly place the really in-depth stuff out of immediate sight in submenus, so that you only need to be faced by the techie bits if you really want to seek them out. You’re even provided with a few test patterns to help you calibrate things perfectly.


Among the projector’s reasonably impressive suite of adjustments are the facility to: adjust the offset and gain for the RGB colour elements; choose the colour space and refresh rate (or you can let the projector auto select them for you); set Texas Instruments’ BrilliantColor system on or off; select the extent to which you want the Dynamic Iris to work; and adjust the image’s sharpness in no less than 12 different ways!!


While a touch more colour management sophistication would have really sealed the deal, overall the H9080FD is a tinkerer’s dream. Or more pertinently, it’s extremely well geared up to the needs of a specialist home cinema installer.

Trying to forget that the H9080FD is essentially a debut product for a whole new projection technology, I have to say I had high hopes for its performance as I settled down with a few favoured Blu-rays to hand. But despite these hopes, I really wasn’t prepared for just how good the H9080FD turned out to be. In fact, the projector is so outlandishly accomplished that it’s difficult to know where to start. Eeny, meeny, miny, mo… Ah, contrast it is, then.


Basically, the H9080FD delivers the most sensational contrast performance I’ve seen from any projector aside from – perhaps! – SIM2’s C3X 1080. And that projector costs more than 20 grand…


At one end of the contrast ‘spectrum’, the H9080FD delivers stunning black levels deep enough to at least rival and possibly outgun the class-leading black levels of JVC’s top-level D-ILA projectors. What’s more, these rich, deep, yet also natural and detail-packed blacks can be delivered without calling in the optional Dynamic Iris system, ensuring that the image looks perfectly stable at all times.


At the bright end of the contrast spectrum, meanwhile, the projector proves it can produce some remarkably pure, clean and bright peak whites. And it can do this even within the same frame as the pitch blacks we’ve already mentioned.

Again, this facility to deliver high bright points right next to deep black points reminds us of JVC’s D-ILA technology. But crucially the H9080FD manages to deliver this cinematic treat with much more apparent brightness than the JVC models. This means that a) the image looks more dynamic, and b) the H9080FD should be able to drive a considerably larger screen than JVC’s still-outstanding efforts.


Another area where the H9080FD scores over even JVC’s mighty D-ILA models is colour response. Saturations are markedly richer and more dynamic, yet this is achieved without compromising a remarkable sense of tonal naturalism and subtlety. I was hugely impressed, too, by the balance of the projector’s colour palette, with no particular tones looking over-dominant.


You can, of course, screw colours up royally if you faff around with the colour space and gamut controls – as well as the dubious BrilliantColour system – without at least a basic understanding of what you’re doing. That said, while we’d always recommend a trip to the colour management tools if you’re brave enough, the H9080FD is to be congratulated for having superb ‘Auto’ settings for many of its features.


This is particularly true when it comes to frame rate calculation, with the projector doing an excellent job of auto-adjusting its refresh rates to suit different types of source so that they don’t suffer unduly with judder. The projector’s ‘cleverness’ in this respect is down in no small part, I suspect, to Vivitek’s decision to equip the H9080FD with Gennum’s latest 9450 video processing engine, with its highly respected de-interlacing and scaling abilities.


This scaling quality is particularly evident when you’re watching standard definition, which the H9080FD manages to upscale to its Full HD native resolution quite brilliantly, with much greater sharpness than we usually see, much less noise, practically no jagged edges at all, and colours which look pretty much as dynamic and natural as those witnessed with HD.

It is of course, though, HD that the H9080FD was really born to show. And this is emphatically confirmed by the mind-blowing clarity with which the projector renders every single pixel of detail from high quality HD sources.


Just as the very best hi-fi systems can make you hear subtle audio effects from your CDs that you’d never noticed before, so the H9080FD makes you feel like you’re seeing favourite HD films again for the first time.


Fans of film grain, in particular, will be astonished at how authentically and naturally the H9080FD picks up the subtle celluloid ‘fizz’ that distinguishes film from video. Just be warned, though, that the H9080FD also has an uncanny knack for revealing that your favourite actors and actresses might not have quite such blemish-free skin as you thought they did…

With the H9080FD also delivering fully on its promise of no DLP rainbow effect, as well as exhibiting not even a hint of visible pixel grid artefacts, it really does deliver the holy grail of home cinema: a totally natural, distraction-free experience that leaves you free to become utterly engrossed in what you’re watching without ever having to think about the technology that’s producing the pictures.


If really forced to find fault with the H9080FD, I might point to the fact that dark areas can look a touch short of shadow detail if you’re not careful with the projector’s calibration. And our test sample also suffered a slight whiny buzz at times, especially when showing really bright material.


But since you can calibrate the tiny black level concern away, and Vivitek assures us that the whine won’t be audible on final production samples of the H9080FD, I guess in the end there really isn’t anything left for me to worry about at all.


Any doubts I may have had about LED’s potential as a true home cinema technology have been comprehensively trounced by the H9080FD. It’s a truly spectacular projector that can produce the sort of picture quality you never want to turn off. In fact, so good is this LED lighting debut that it’s hard to imagine how the technology could be improved for its next generation. Perhaps the best way I can convey just how good the H9080FD is, though, is by saying that even though it costs £10,995, in my book it’s actually something of a bargain.