While the Uniti Star costs a not inconsiderable sum, it doesn’t have much in the way of obvious competition. Linn’s Selekt DSM is an extremely high-performance all-in-one - but at Uniti Star spec it costs well over five grand. In terms of build quality and sound this is absolutely exemplary stuff from Naim.

What does the term ‘music centre’ make you think of? The answer depends on how old you are, I guess – but no matter when you were born, you’re probably thinking about one box that takes care of all your music needs.

Despite the fact it’s fast approaching its 50th birthday, Naim isn’t living in the past where its range of music centres are concerned. Its Uniti series of all-in-one stereo systems has been winning plaudits and profits – and with Uniti Star it’s aiming to deliver everything the discerning (and reasonably wealthy) listener could realistically require. Just add loudspeakers.

Anyone familiar with Naim’s current brand of industrial design couldn’t mistake the Uniti Star for any other manufacturer’s product. It’s a chunkily elegant piece of black, brushed aluminium casework with (visually quite arresting) aluminium finned heat sinks along each side. 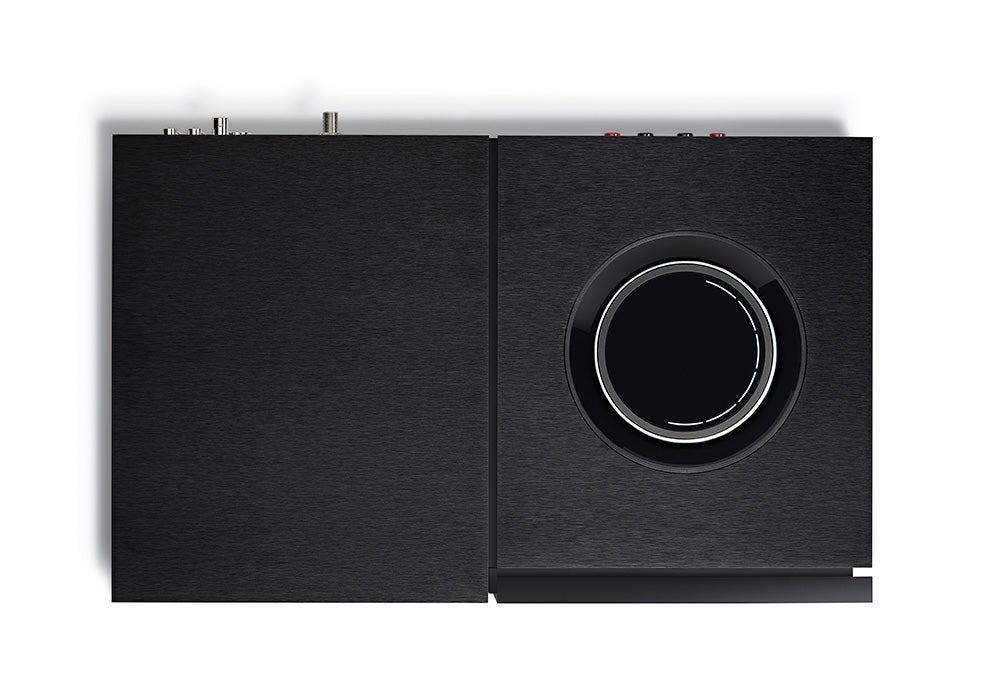 On top there’s a reworking of the oversized control wheel that’s become such a feature of Naim’s current range of products, and up front there’s a crisp 5in full-colour LCD display. The Uniti Star appears to float on that illuminated slab of perspex that’s become a signature Naim design feature.

So it’s boxy, in a purposeful – rather than an unimaginative – way, and like every other product in Naim’s current range it’s built to survive disasters of all kinds. If you feel confident in judging a piece of equipment’s quality at least in part on the basis of how heavy it is, the 13kg Uniti Star will reassure.

Given that the Naim Uniti Star is a music centre, it follows that it will have plenty of functionality. Which proves to be the case – if you find yourself in need of features the Star doesn’t have, well, perhaps you’re trying too hard.

As far as physical sources go, the Uniti Star has that most retro of facilities: a CD drive. As well as playing CDs it also functions as a ripper, so your space-hungry CD collection can be ripped to local storage for ultra-convenient playback. The Star has a couple of USB sockets and an SD card slot to make local storage even more local. 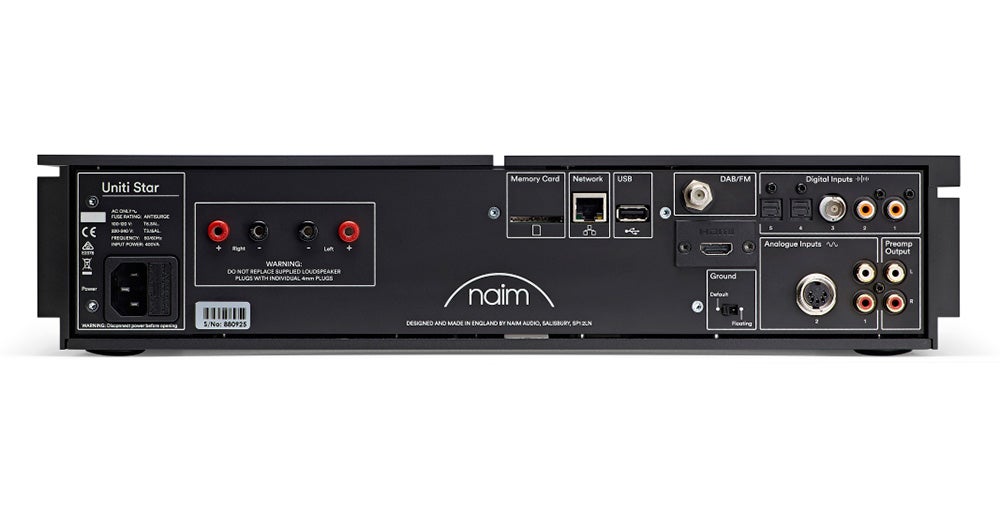 Other physical inputs include a pair of digital optical inputs (each good for digital audio files to a maximum of 24bit/96kHz resolution), three digital coaxial sockets (two RCA, one BNC, all good for 24bit/192kHz), an Ethernet socket and an HDMI ARC input to bring your TV onto the Star’s radar. Analogue inputs are restricted to a stereo RCA connection and a 5-pin DIN equivalent.

And there’s even more functionality where wireless sources are concerned. The Star is Roon-ready, has Chromecast Built-in, AirPlay 2, Tidal, Spotify Connect, internet radio (provided by vTuner), aptX HD Bluetooth and UPnP. Naturally, dual-band Wi-Fi is on board too (Naim has cunningly hidden both the Wi-Fi and Bluetooth antennae inside that lovely control wheel).

Over the network the Naim is capable of delivering up to a 32bit/384kHz and/or DSD128 standard, and for old-school radio fanatics there’s the option of a DAB+/FM tuner module.

There are stereo RCA outputs for a power amplifier and a pre-out for use with a powered subwoofer. Up front there’s a 3.5mm socket for use with headphones.

No matter the source, it’ll be driven by the Star’s Class AB amplification – it’s rated at 70 watts per channel into 8ohms, which is more than enough to deal with all but the most recalcitrant speakers.

There’s no denying the Naim’s display is a lovely thing – colourful, crisp and high-definition – and it’s alongside a total of four fascia controls: power on/off, play/pause, input selection and ‘favourite’. The days of a music centre making a virtue of having dozens of buttons and controls are long gone. 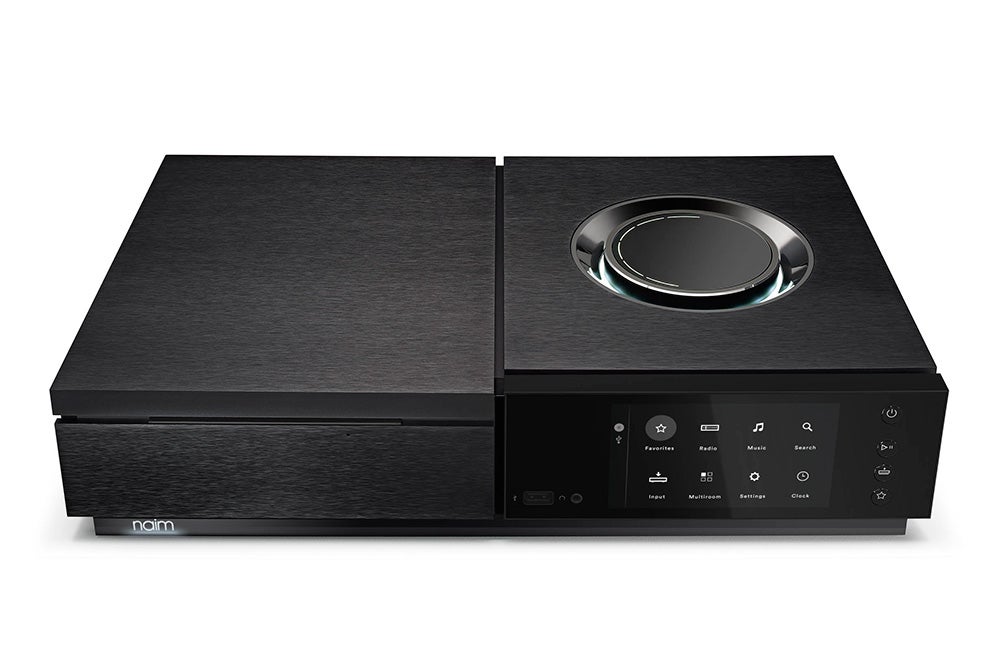 What the modern music centre needs is a remote control (the Naim’s is comprehensive, backlit and nice enough in the hand, though not nice enough to feel like it’s accompanying a £3.5k product) and a control app. Naim’s iOS and Android app is as clean and clear as the Star’s fascia display, and it’s about as stable as these things ever get. That’s to say it’s not entirely stable, can be a little slow-witted at times and isn’t above crashing if it gets a bit stressed.

Naim’s problem is the same as every other brand’s problem where control apps are concerned. Everyone has used an app designed by a company with effectively unlimited time and money to devote to it, and as a consequence everyone expects every other app they use to be this stable and reliable.

But only companies with the aforementioned resources can deliver perfect apps – every other brand simply does the best it can with the resources it has. But when you’re three-and-a-half grand lighter after purchasing a Uniti Star, to see the control app crash (again) is a little deflating.

To anyone who’s familiar with Naim’s recent work, or anyone who expects a hugely expensive music centre to deliver where it counts, the following will come as not that much of a surprise: the Naim Uniti Star sounds excellent.

It doesn’t matter the source or the material – I used everything from a 320kbps Spotify stream of Yo La Tengo’s “From a Motel 6” to a 24bit/192kHz copy of Aretha Franklin’s “Dr Feelgood (Love is a Serious Business)” via a CD of The Upsetters’ “Super Ape” and a vinyl copy of “Clear Spot” by Captain Beefheart & His Magic Band. It doesn’t matter the volume level – the Star can drive any and all speakers effectively from very low to recklessly high levels. The Naim Uniti Star sounds excellent. 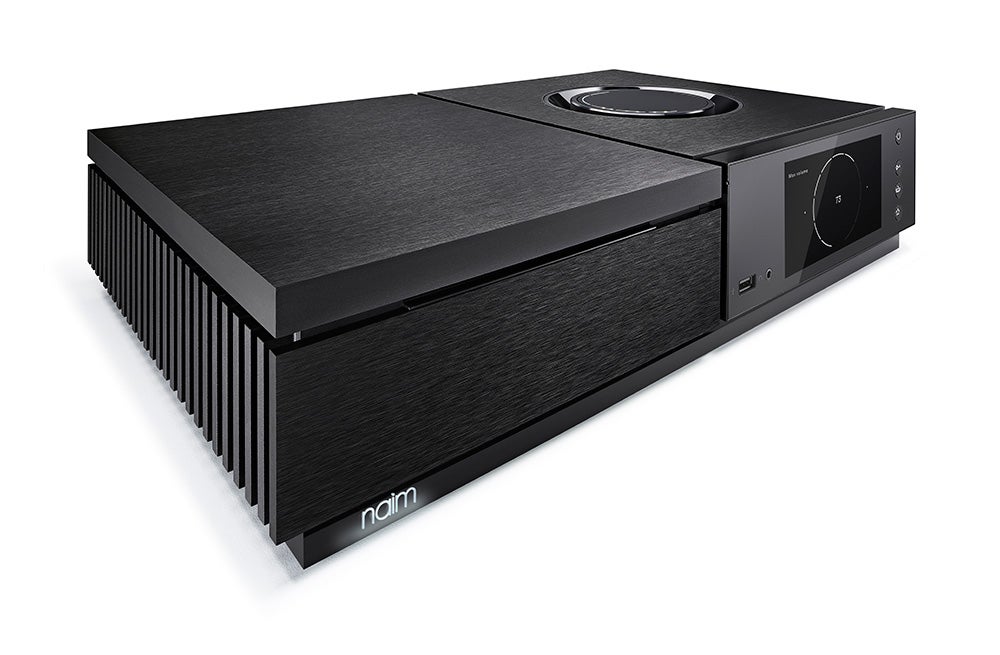 Every aspect of music-making is paid attention to here. Detail levels, for instance, are sky-high – Lee Perry’s bonkers production of “Super Ape” is alive with details of his techniques, the Heath Robinson reverb units and the compromises he made in order to achieve the desired effect, and the Naim lays them all out for your inspection.

Nothing escapes its attention, nothing is given undue prominence – and throughout, the Naim never sounds like it’s valuing analysis over enjoyment – the sound it generates is always entertaining, always musical.

Stereo focus and soundstaging during “Clear Spot” is absolutely impeccable – the image the Naim presents is entirely believable. And, again, it doesn’t prioritise anything above the need to deliver music in as natural and cohesive a manner as possible. They layout of the stage is explicit, the space between musicians tangible, and the unity of their performance – the timing, the out-and-out feel – is utterly convincing.

The playing is clean and musicianly, even though the arrangements are as off-kilter as one might expect. And throughout, the Star is authoritative and unflappable.

Midrange communication, as evidence by the peerless Aretha Franklin vocal, is prodigious – you’re left in no doubt as to her technical prowess and precision, nor to her emotive abilities. Low-end extension and control is available in spades during the Yo La Tengo tune, and there’s ample detail and texture fleshing out the bass information.

Normally at this point in an appraisal of sound quality, there would be a paragraph (or two, if the product in question deserves it) about the things that aren’t quite so satisfactory. But in all honesty, there is simply no arguing with the way the Naim sounds.

It’s as complete a musical experience as £5000 (including some appropriate speakers) can buy – and believe you me, it’s by no means a given that £5k buys audio excellence. So instead of nit-picking, let’s mention the Naim’s dynamism (splendid), integration (seamless) and overall breadth of talent (very wide indeed).

Should I buy the Naim Uniti Star?

There are the obvious caveats here. £3499 is a lot of money, and getting the best of the Naim Uniti Star is going to require similarly capable loudspeakers – so unless you already have a pair, you’re looking at £5k all in. A not-inconsiderable sum.

But in this instance, it’s money invested. Thanks to its extensive range of talents, its support of an extensive range of sources and its unburstable build quality, the Star is a music centre that should last for years and years.

What’s more, it doesn’t have much in the way of obvious competition – especially not if the legacy CD drive/ripper is important to you. Linn’s Selekt DSM is an extremely high-performance all-in-one – but at Uniti Star spec it costs well over five grand, and that’s without speakers. In other words, this here all-in-one is the only one.

Of course, it’s possible to buy a system comprising of a CD player/ripper, streamer and amplifier without spending any more than the Star costs. But that won’t be a music centre – it’ll take up more space, need more mains power, require connections between each box, and won’t have a lovely glide-y control wheel. And I don’t reckon it will have the sheer audio talent of the Uniti Star.

And I don’t reckon it will have the sheer audio talent of the Uniti Star.