The Naim Uniti Atom is the future of hi-fi.

What is the Naim Uniti Atom?

The hi-fi world has been going through a change in recent years, and Naim is one of the few companies fully embracing it. Gone are the days of hi-fi being limited to a few with the time, patience and space to build a system of separate audio components. Numbered are the days of physical media, thanks to the introduction and steady improvement of online streaming sources. So is the Naim Uniti Atom the future of hi-fi?

An all-in-one music player comprising a high-resolution streamer and a 40W integrated amplifier, the Uniti Atom is half the size of a typical hi-fi component. However, its vast array of physical and networked connections, plus its stunning design and stellar audio performance suggest that no compromises have been made here. Just add a good pair of speakers and you’re off to audio nirvana. 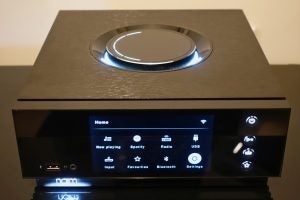 In some ways, a hi-fi system is like a car. Sure, a cheap one will still get you from A to B, but there’s a sense of joy, panache and reassurance that comes with going premium. In that respect, the Naim Uniti Atom is basically an Aston Martin.

The chassis is almost entirely made of black aluminium. Despite being a ‘half-sized’ hi-fi system at 95 x 245 x 265mm, it’s a heavy beast. Weight isn’t always an indicator of quality, but when your new toy is built like a tank, it’s hard not to feel good about it. You’ll want to set it up on a sturdy surface – that shaky coffee table won’t be up to the job.

The top aluminium panel has a brushed finish, which isn’t only pleasing to the eye; it feels good too. The aluminium sides are more practical – they’re finned to serve as heatsinks. Naim says this serves to maximise thermal stability, which in turn helps with longevity and sonic performance. Those who know their hi-fi will recognise this as an element lifted from the £120,000 flagship Naim Statement amp system. 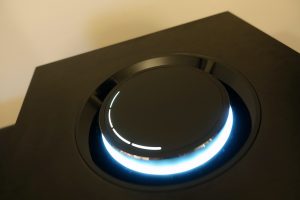 Then there’s the pancake-sized volume knob, clearly descended from the one on the Naim Muso sound systems. It’s a solid mechanism with no hint of wobble; its weight makes volume adjustment almost ceremonial, yet it turns so smoothly it might as well be set into satin. Sure, you can make it go louder with the remote – but getting up to do it yourself is infinitely more pleasurable.

There’s a commitment to mood lighting here too. A white glow emanates from the base of the volume dial, but as you increase volume, parts of its surface light up. The Naim logo is also illuminated in white, peering out from behind a bar of acrylic. Naim purists might miss the old green-lit logo, but I always found it a little dated.

A 5-inch LCD screen fills much of the acrylic face plate. It’s a decent screen, being big and clear enough to display the input you’ve selected from several metres away. It’s full-colour too, which is all the better for displaying cover art. It isn’t a touchscreen, though. 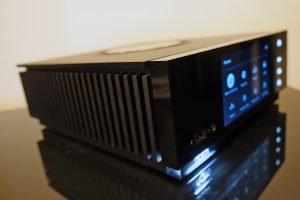 That this is no ordinary music system is emphasised through a number of small touches, such as proximity sensors. Get close to the screen and it will switch from cover art to track info; reach for the volume knob and the volume indicator segments light up.

Motion sensors are also at play in the remote control. Pick it up and its backlit buttons spring to life. Particularly elegant is the remote’s ring of light, which synchronises with the Uniti Atom’s volume knob. Crank it up on the Atom itself and the remote’s lights change accordingly. Very cool indeed.

If there’s a design choice over which I remain unconvinced, it’s the use of glossy acrylic for the remote control – it’s fingerprint magnet. Still, it’s easy enough to wipe down. And there’s a remote app as an alternative.

Don’t let those designer looks fool you. The Naim Uniti Atom is armed with all the connections you’d expect of a traditional hi-fi setup, and plenty more besides.

You get three digital inputs (two optical, one coaxial), one set of analogue RCA inputs, one pre-amp output, 3.5mm headphone output, two USB ports (front and rear), plus a set of speaker outputs for 4mm banana plugs. Curiously, there’s an alternate Naim Uniti Atom with an HDMI ARC input – that one costs an extra £150.

Networked connections include Wi-Fi and Bluetooth (SBC and aptX HD supported), with compatibility for Chromecast, Spotify, Tidal, Apple AirPlay 2 and internet radio. As usual, you’ll also be able to stream your own music from networked storage devices. 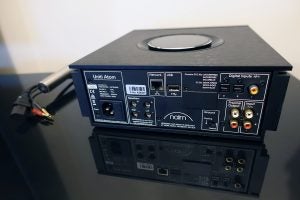 Tying everything together is the Naim app, which is tidy and easy enough to navigate. Tidal is built into the app, but there’s no integration for Spotify – you get transferred to the official Spotify app. The software isn’t as snappy as I’d like, and I experienced a couple of crashes. Overall, however, this is one of the better audio control apps out there.

Oh, and Naim’s obsession with detail extends even to the power cable. The Power-Line Lite is a kettle lead on steroids, featuring floating pins within the case for superior electrical contact and a decoupled mechanical design, which aims to prevent vibrations travelling between components.

I tried several sets of speakers for this test – some old Mordaunt-Short MS10, the new Q Acoustics 3020i, and my default setup – a pair of Dynaudio Contour 1.3 MK II. They’ve all got their own traits but consistent across the board was how good they all sounded with the Naim Uniti Atom. I don’t have floorstanders, but I’m happy to say the Atom definitely suffers no issues driving large stand-mounted speakers.

The highest compliment that I can pay the Naim Uniti Atom is that it made me want to rediscover my favourite songs. I got into hi-fi in the first place because I wanted to hear more of the music I enjoyed. Happily, Naim has brought me back to a mood of discovery and rediscovery.

A good sound system isn’t one that adds the most; it’s the one that takes the least away. And listening to the Naim Unit Atom, it often felt like a veil had been lifted off some of my most familiar test tracks. 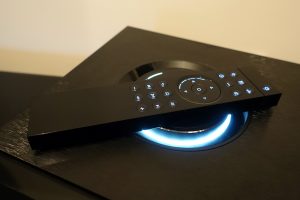 The level of insight – of clarity and detail – is simply remarkable. I found myself appreciating parts of songs I’d previously taken for granted, which is quite something considering my repertoire of reviewing music hasn’t changed much in six years.

The smallest differences in production are laid bare. I became fascinated by how much bass notes had changed from the 1980s to the 2000s, how they’d generally become more intense and muscular.

There’s no shortage of texture, so at all times you’re clear what is playing. The real treat is the rhythmic precision and the enunciation of the smallest imperfections, which gives you a connection to the human behind the instrument. Then there’s the sense of space and separation, which is so palpable that not only will you be aware of what they’re playing and who’s playing it – but also from where they’re playing it. 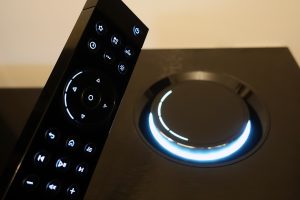 This is a hugely dynamic listen, too. The Naim Uniti Atom is capable of a hard-hitting performance if you’re into the sort of music that shakes your light fittings. However, where it really shines is in the subtle dynamic shifts that make vocals expressive, or orchestral crescendos hit home.

This insight, timing and dynamism was consistently delivered across any genre of music thrown at the system. The funky psychedelia of Dr John, the low-end menace of Massive Attack, the big-band chaos of Buena Vista Social Club, the bright brass of John Williams, the melancholic vocals of Rachel Yamagata – nothing could confound the Naim Uniti Atom, which shifted gears appropriately at every turn.

Even more impressive was the fact that the system did this with a variety of sources, from 320kbps Spotify to CD-quality to 24-bit tracks streamed via aptX HD Bluetooth. The Naim Uniti Atom resisted the temptation to bully the lower-quality tracks and emphasise their shortcomings. You do lose out on some detail, but the sound is always exciting. 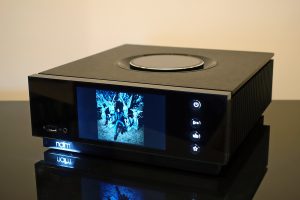 Why buy the Naim Uniti Atom?

The Naim Uniti Atom is exactly what hi-fi should be in this day and age. Yes, you could spend £2000 on separate audio components and have change remaining for a decent set of speakers, but it’s hard to argue against the convenience and elegance of the Naim Uniti Atom, which can easily hold its own against any separates system out there.

Such sound quality, such flexibility in sources and such beauty in design – this is a rare treat. If you’re ready to bring your hi-fi setup into the 21st century, the Naim Audio Atom is just what you need.

This is the future of hi-fi.