Cambridge's great year continues with the CXA81 integrated amplifier. It improves upon the enjoyable if flawed CXA80 with new features, putting in an authoritative performance. It's currently the best integrated amplifier you can buy for around £1000.

The Cambridge CXA81 is the top-of-the-line integrated amplifier in its updated CX range of hi-fi separates. It replaces the CXA80 and throws several new features into the mix.

They must be working around the clock at Cambridge Audio at the moment, the company having launched a plethora of new products recently. The spectrum covers the £119 true wireless in-ears to £4.5k integrated amplifiers via wireless hi-res audiophile turntables – and each and every product has come in somewhere between “very good” and “really very good indeed”.

There’s no hint of Cambridge dropping the pace, either. For instance, its 2016 CXA80 integrated amplifier offered £750 worth of smooth, sophisticated stereo sound, winning it many admirers. So naturally, Cambridge Audio has had a rethink.

The result is the CXA81 – and the biggest initial headline is the price. At £999, Cambridge has pitched this reimagined integrated amp directly into serious hi-fi territory, with the likes of Rega, Audiolab and Arcam now direct competitors.

Does the CXA81 have what it takes to compete in that world?

There isn’t much happening on the outside of the CXA81 to suggest the Cambridge engineering team has ripped up its blueprints and started again. The understated yet handsome fascia has been tidied up, thanks to the removal of balance and tone controls, and is now coloured a sort of noncommittal grey as it (seemingly) floats above its recessed plinth. 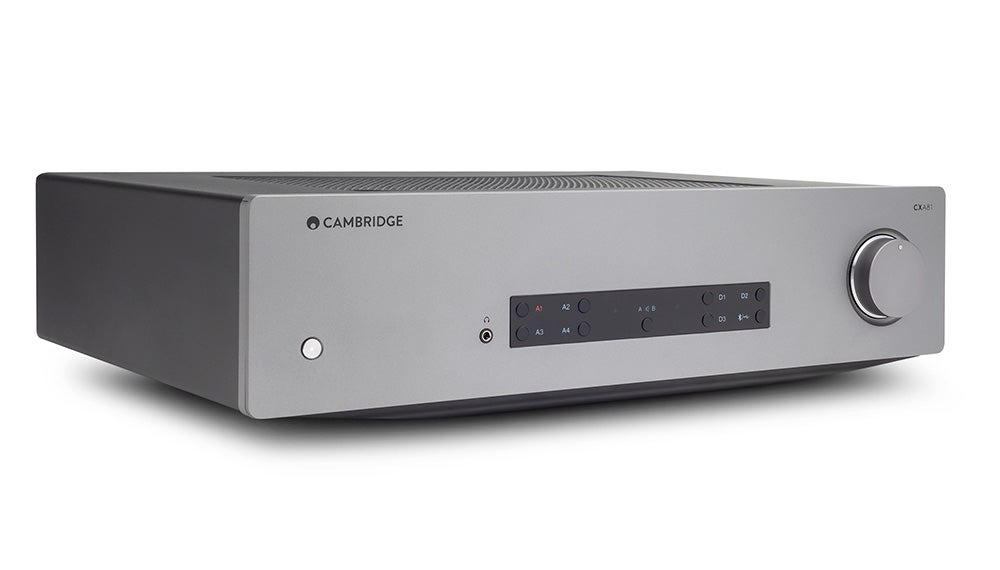 Other than a volume control, input selection controls, a power on/off button and a 3.5mm headphone output, there isn’t much here at all. If “minimal” is a design language you admire, you’ll love the look of the CXA81.

If design-wise it’s more-or-less business as usual, Cambridge has been hard at work under the bonnet. Much of what passes as the “nuts and bolts” of such a product has been subjected to a hard stare, and as a consequence there have been numerous changes.

The most obvious, and most headline-grabbing, is the introduction of ESS Sabre’s ES9016K2M digital-to-analogue convertor. This is a deep-breathing DAC, capable of dealing with 32bit/384kHz and DSD256 digital files (at least via the USB socket on the rear panel. The pair of digital optical inputs top out at 24bit/96kHz and the coaxial input is limited to 24bit/192kHz).

In addition, where the outgoing CXA80 relied upon a wireless dongle, the CXA81 includes integrated aptX HD Bluetooth reception (to a 24bit/48kHz standard). Plenty of the crucial-but-unglamorous components such as capacitors and op-amps have been upgraded in the name of improved audio performance. 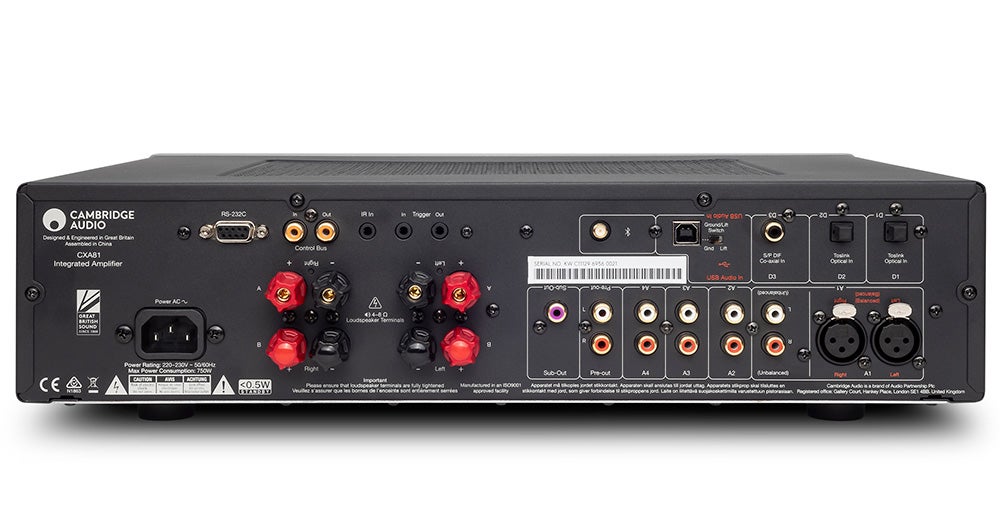 As well as those digital inputs, the CXA81 has four unbalanced RCA analogue inputs and a balanced XLR pair, too. Also included is a suite of the sort of ins and outs so beloved of the custom install industry.

So, in terms of connectivity, all that’s missing is a phono stage for a turntable. Cambridge will undoubtedly (and reasonably) point out a) its splendid Alva TT record player has an integrated phono stage; and b) it has an extremely well-regarded range of off-board phono stages in its product line-up.

Control is via Cambridge’s system remote, which naturally features an excess of buttons beyond that’s required to change the CXA81’s input or alter its volume. It’s a bog-standard handset that doesn’t really feel classy enough to be accompanying a grand’s-worth of amplifier.

There’s no point in being coy when it comes to the CXA81’s sound. This is a brilliantly accomplished amplifier, one that pays close attention to every single aspect of music reproduction and serves it up in an entirely convincing and enjoyable manner. And this is true no matter the source of your music, nor its genre. The Cambridge CXA81 is as good as it currently gets at its £1000 price.

Detail levels are as good a place as any to start, and the Cambridge reveals an absolute torrent of detail. Juana Molina’s Eras is simply packed with information, and it’s divulged with absolute clarity and assurance.

Whether it’s the barely there squeak of a fingertip on a guitar string, or the palate noise as the singer prepares to deliver the next line, the CXA81 lays it out for you. Not in a showy way, mind – everything the Cambridge reveals is in proper context, with no undue emphasis being drawn to any element of the recording.

This kind of finely judged balance holds true for tonality throughout the frequency range, too. An all-court test such as Spiritualized’s Come Together illustrates the point perfectly. There is formidable power and punch to the low frequencies (although it’s fearsomely controlled), wide-open spaciousness to accompany the heady detail levels in the mid-range, and assertive levels of attack at the higher end. 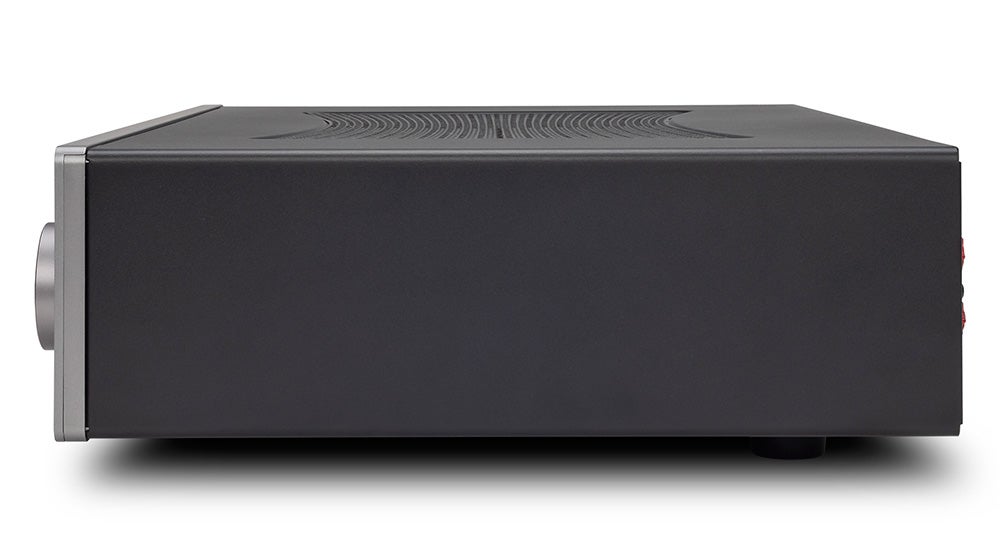 Integration throughout the frequency range is seamless, so the impression of performance unity (even in a mix as cloudy and dense as this Spiritualized tune enjoys) is absolute.

The CXA81 can turn its hand to pretty much anything. Switch down a notch or two with a listen to Billie Holiday’s You’re My Thrill and the Cambridge handles the lugubrious tempo, as well as the peerless vocal, well. Step it up again with Amon Tobin’s Get Your Snack On and there’s all the energy, all the dynamism and all the propulsion the song demands.

You should buy the Cambridge CXA81 if…

You’re not short of options with efforts from other brands such as Rega and the Arcam both engaging and persuasive amps. But hear them against the CXA81 and, although the differences are hardly night and day, there’s really only one amp on which you’d be happy to spend your money.

You shouldn’t buy the Cambridge CXA81 if…

Rega’s Elex-R, for example, has plenty to entice. It’s a confident, nimble listen with a good eye for detail – and it has a very capable phono stage on board too. However, it lacks for both power and digital compatibility next to the Cambridge – there’s no DAC, no Bluetooth and, ultimately, it can’t quite compete with the CXA81 when it comes to across-the-board fidelity.