While there isn’t much competition at this price, Audio-Technica’s LP60-XBT offers similar features for around the same price – but its softer performance means the Sony PS-LX310BT inches ahead. Wallet-friendly, easy to use and with a fine sound, the PS-LX310BT is a good all-round choice for those looking to get into vinyl hassle-free.

After launching the PS-HX500 a few years ago, Sony is back with a new vinyl player in the PS-LX310BT. Featuring Bluetooth for connection to a wireless speaker, soundbar or headphones, this is a record player with accessibility and convenience in mind, bringing the barrier for those looking to get into the world of vinyl.

Vinyl records are a pain in the neck, aren’t they? Big, heavy, tricky to store, easy to damage, cumbersome… You love them, don’t you? You love the way they look and feel and sound. We all do.

Record players, if anything, are even worse. Some need intricate systems to even be audible. Some require you to get out the scales, pliers and safety goggles before they’re ready to play.

Sony can’t do anything about the shortcomings of vinyl records, but with the PS-LX310BT it takes a decent stab at delivering a straightforward and super-convenient record player.

No surprises here. The 310BT is a rectangular box with a circle on it. The plastic construction feels lightweight, but proves perfectly sturdy. It looks smart in its matte-black finish, and the clear dust-cover is in no way flimsy. The way the 20cm tonearm is offset slightly in its pivot adds a brief – and welcome – design oddity. 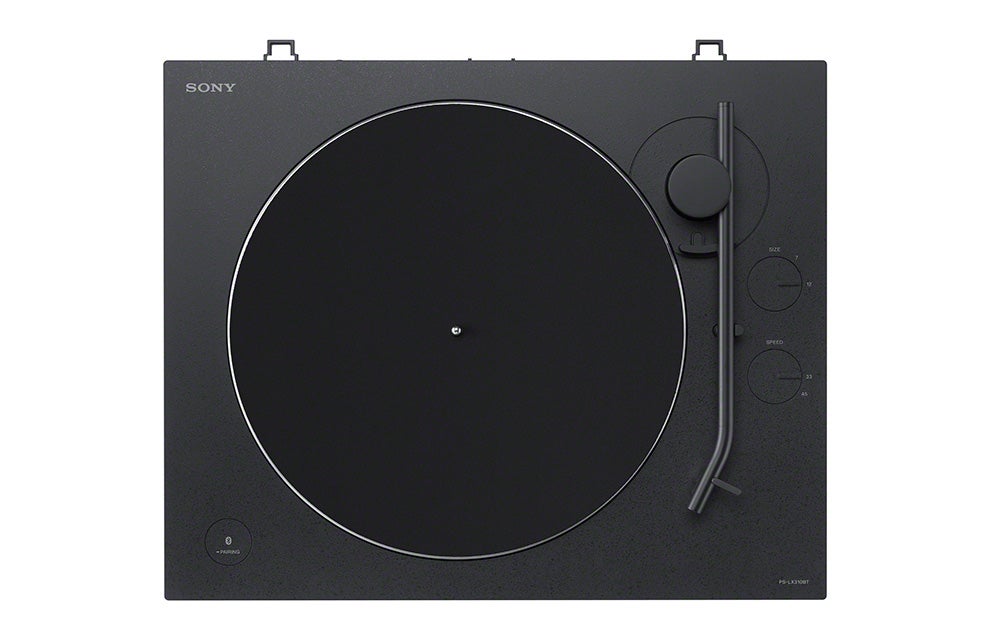 “Convenience” is the name of the game here, and the 310BT does plenty to make your vinyl experience as painless as possible.

The moving-magnet cartridge is attached, set to a sort-of acceptable 3g tracking weight and with bias and anti-skate all taken care of too. All that’s required is for you to put on the aluminium platter and put the drive belt around the motor pulley.

The Sony has start/stop buttons and arm up/down buttons on its front panel, and two selector dials next to the arm itself: one to switch between 33.3 and 45rpm, and one to select 7in or 12in disc size. 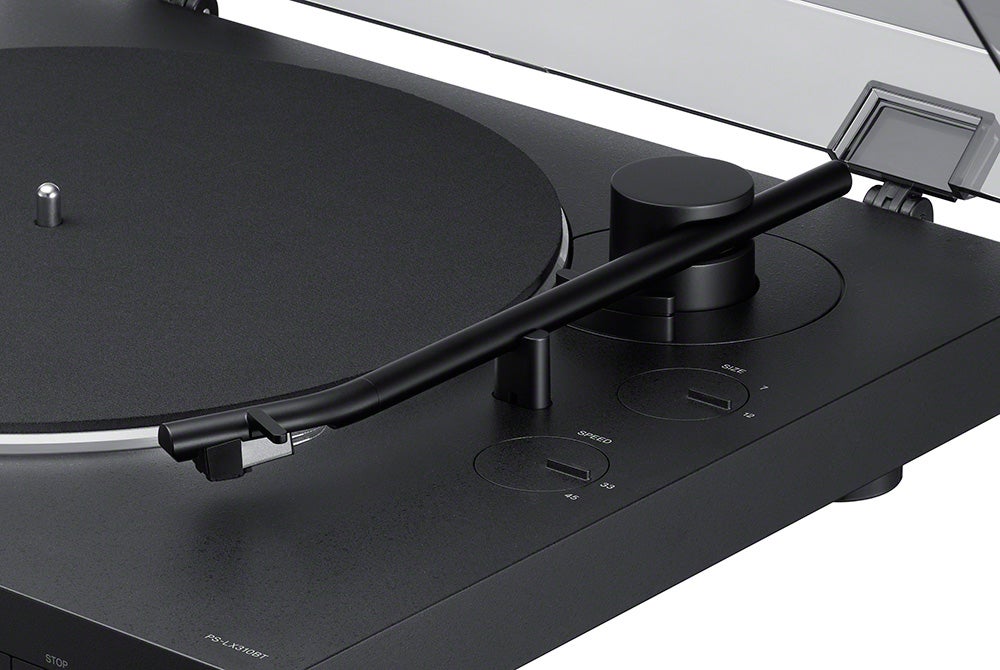 On the opposite side of the plinth is a big round button for Bluetooth pairing. Around the back you’ll find switches for line/phono (so the 310BT can connect to any amp or speaker, regardless of whether or not they have their own phono amplification), and for low/mid/high gain control (activated when the Sony is outputting at “line” level). There’s also a power on/off control and hard-wired left/right RCA cables.

The Sony doesn’t quite take your records from their sleeves itself, but it does pretty much everything else. The vinyl experience doesn’t get any more hassle-free than this.

In broad terms, the 310BT does everything it should – and with a degree of style. No, it can’t compete with purist £200-ish turntables that do nothing but spin records, but that’s hardly the point.

Hard-wired to an amplifier and with the phono stage engaged, the Sony gives a decent account of Radiohead’s In Rainbows. There’s very acceptable drive and momentum to its presentation, decent heft at the bottom end, and a nicely detailed presentation of the vocal (and the rest of the mid-range information, too, for that matter). 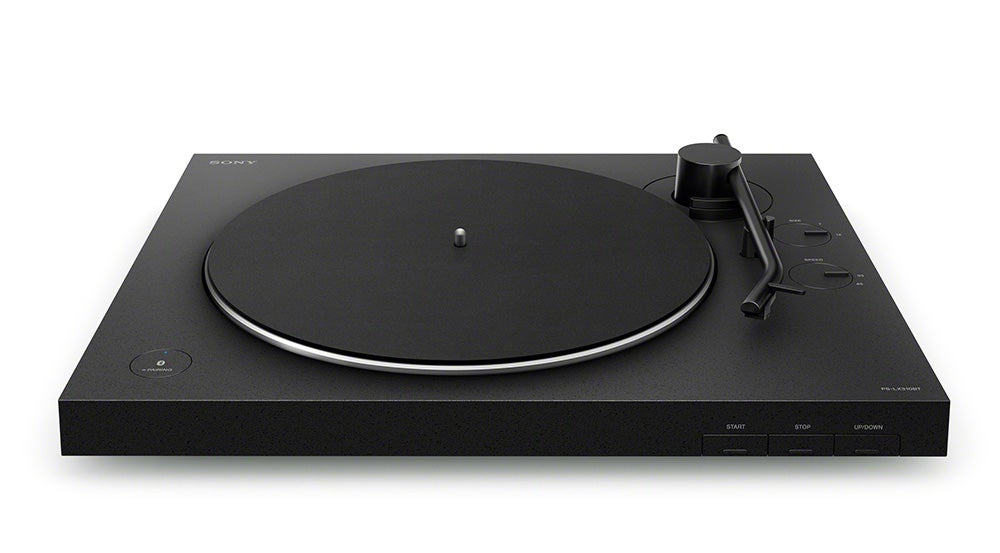 The top of the frequency range is played safe, with the Sony favouring smoothness over outright attack, but it never gets overly warm. Everything moves along at a respectable clip, and there’s a pleasant suggestion of the timing and unity of presentation for which the vinyl format is so acclaimed.

It’s worth comparing the Sony’s onboard phono amplifier to the one in your amplifier (should your amp have one, of course). This is because the 310BT has a little more to give, in terms of soundstaging and stereo focus, than its own phono stage reveals. When hard-wired to an authentically capable phono stage, the Sony is a little more open and has greater rigour when describing the start and stop of individual notes during the clattering 15 Step. 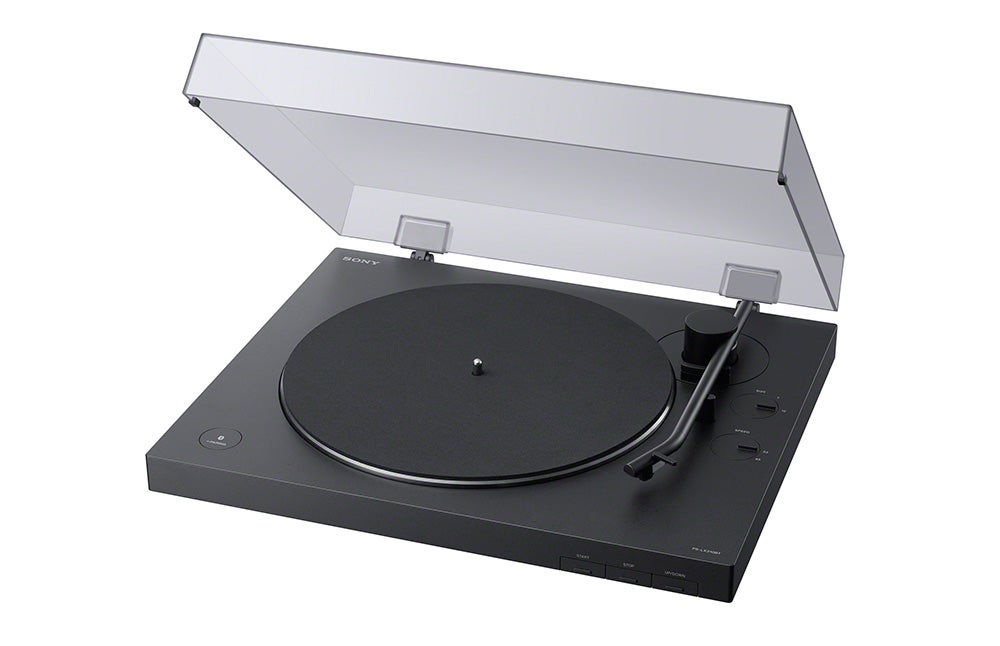 It’s the “BT” part of the PS-LX310BT that will interest the majority of users, however. There’s a lot to be said for simply parking a turntable wherever is most convenient and then wirelessly linking it to a speaker or a pair of wireless headphones.

Connected this way, the Sony loses a little of the dynamism and detail it enjoys when hard-wired. Reproduction of the highest frequencies shift from “safe” to “quite dull” – but in general terms the Sony does a sterling job. It still punches its way through Cassius’s 1999 manfully, still has swing and drive, still lays out a soundstage in a reasonably coherent manner.

So if there’s a price to be paid for all this convenience, it’s hardly ruinous. As long as you approach the Sony PS-LX310BT on its own terms – as a record player that’s been designed to be as benign and user-friendly as possible – you won’t fail to be won over by it.

Proper Bluetooth turntables are still pretty thin on the ground – “proper” in this instance excludes sub-£100 kiddie stuff) – and the Sony is a little short of genuine competition at this price. The Audio-Technica LP60-XBT can be had for similar money, and is every bit as competent as the Sony in terms of usability. However, it’s a softer listen and doesn’t punch as meaningfully as the Sony.

Beyond that, you’re looking at spending ever more sums of money. Pro-Ject’s Essential III BT is a better all-rounder than the Sony, and doesn’t have such a big differential between its wired and wireless sound – but it costs half as much again as the 310BT. Next up is a jump to the £1500 Cambridge Audio Alva TT – which is an unhelpful comparison.