Plantronics says that its Voyager 510 headset was one of the most popular that it ever produced. So when it came to updating that model it wanted to tread lightly and not throw away the core DNA that made the 510 so popular. As a result the Voyager Pro doesn’t look all that different to its predecessor, but inside there are some significant tweaks, especially in the all important area of noise cancellation. However, this is an expensive headset that will set you back around £79. With low-end Bluetooth headsets now available for under the £20 mark, the Voyager Pro is going to have to provide something special in terms of performance to justify its high price tag. 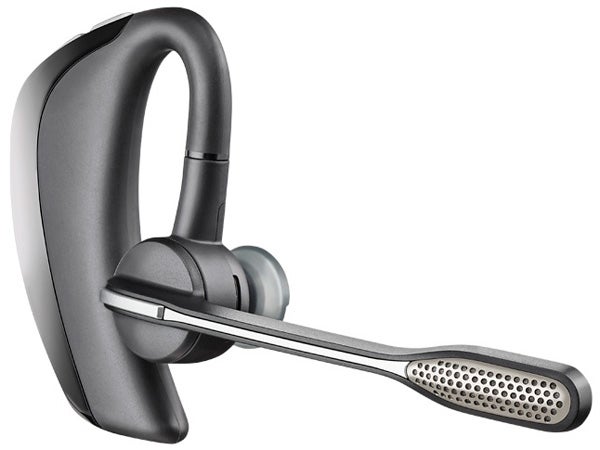 Unless you work in a call centre, stylish isn’t a word that’s going to spring to mind when you first set eyes on the Voyager Pro. It’s considerably larger than most headsets now on the market and with its big and bulky ear hook, which houses the battery and most of the electronics, it looks like a bit of a throw back to the 1990s. Getting it on your ear is a two handed operation, but once it’s firmly in place we have to admit that it does actually feel quite comfortable with the heavier earhook section helping to hold it nice and stable.


Plantronics has kitted out the Voyager Pro with just four controls – volume up and down, an on/off switch and a call control button. Extra functions, such as mute are activated through multiple button presses. For example, to mute and unmute the mic you hold down the volume up and down buttons simultaneously. A female voice then informs you through the ear piece that mute has been turned either on or off. The Voyager also has a single LED light that’s used to indicate its various states. For example, when it’s in pairing mode it flashes blue and red and when the battery is charging it uses various numbers of flashes to indicate the current level of charge in the battery. There’s also a voice prompt for when the battery is running low starting from when you’ve got 30 minutes of talk time remaining. 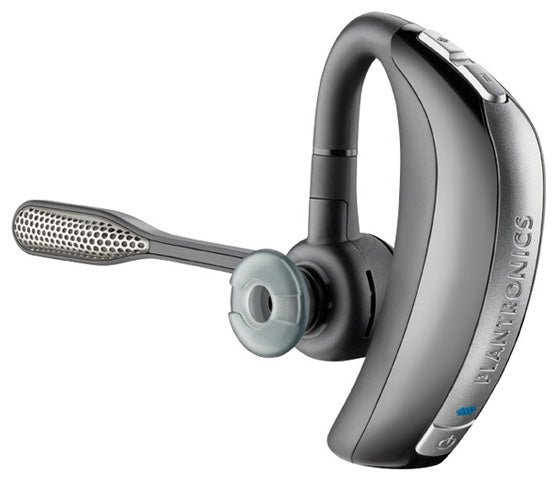 As with most headsets, the pairing process is very straightforward. To get the headset into pairing mode you start with it off, then press and hold the power button until the LED flashes blue and red. Then it’s simply a matter of doing a search for it on your phone and entering the standard 0000 passcode.


As you would expect on a high-end headset like this the Voyager Pro supports multipoint. This means it can be simultaneously connected to more than one handset or Bluetooth device. So, for example, you could have it connected to your work mobile phone at the same time as your personal mobile, or connect it to your work mobile and laptop at the same time so it’s ready to take Skype calls.

Where the Voyager Pro really excels is in call quality. For starters, the earpiece is louder than most other models we’ve used, but this extra volume doesn’t come at the expense of clarity as the audio from incoming callers still sounds very crisp and clean. The headset is also wonderful at blocking out wind noise, something that many headsets struggle with. Plantronics told us that it spent a long time both tweaking the noise reduction and looking for the right material to use on the cover of the internally and externally mounted microphones in order to minimise wind noise. 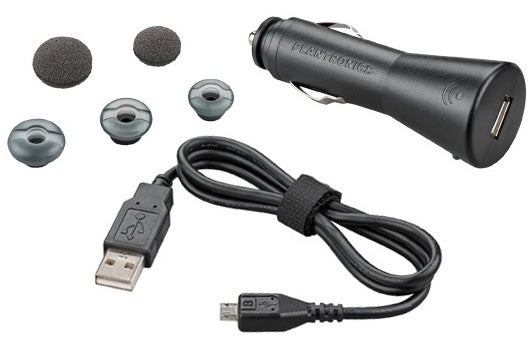 The results speak for themselves as even out during one of London’s more blustery days, with the branches on the trees shaking around us, callers said that they could hardly hear any wind noise at all. And when we switched back to our phone’s built-in mic, one caller even asked us to move back to the headset because they could hear us clearer on it. That’s a pretty good endorsement of Plantronics’ efforts in this department. In fact, the noise-cancelling capabilities of this headset are overall one of the best we’ve used. Even when presented with extreme background noise it does a good job of suppressing it without making the voice sound too metallic like lesser noise-cancelling systems tend to do.


The Voyager Pro is charged via its micro-USB port, which is found on the bottom of the chunky ear hook. In the box, Plantronics supplies a wall charger complete with three plug attachments for international use. A standard micro-USB lead is also included so you can charge the headset from a laptop and naturally there’s a car charger too. 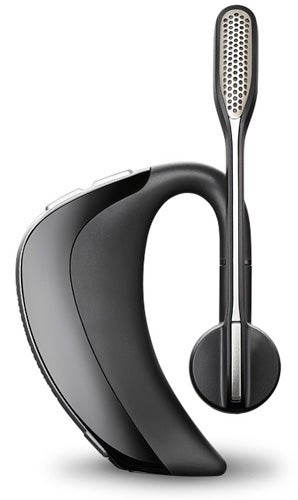 As the Voyager Pro is quite a large headset you’d expect there to be plenty of room to fit a larger than average sized battery, which would have the knock on effect of increasing the talk time. While the unit does have a larger battery, unfortunately some of this extra power goes towards the noise-cancelling circuitry and as a result the Pro doesn’t really offer any more talk time than your typical headset. Plantronics quotes a talk time of six hours. We tended to get around five hours out of it, which isn’t bad, but no better than other similarly priced models.


The Voyager Pro may be expensive, but in terms of performance it really delivers the goods and certainly has one of the best noise-cancelling systems we’ve used on a headset. However, although it’s comfortable to wear once you get used to it, there’s no denying that with its chunky and overly large design it’s pretty ugly to look at and could make you feel quite self-conscious while wearing it.


Whether you can put up with this or not will be down to personal taste, but it’s worth noting that if you want similar noise-cancelling performance without the bulky design you might want to hold off until September. This is when Plantronics will introduce a more stylish model into its Discovery range that will borrow much of the noise-cancelling technology from this headset.