With an upgraded AI-enhanced image processor and new motion handling, this 55-incher could be the OLED to beat this year. Philips has even given Ambilight a facelift…

Philips’ OLED range is back with the 55OLED805, and it comes a few improvements over the previous year’s efforts.

Philips’ 805 OLED may look remarkably similar to last year’s 804 model, but behind the glass lurks a raft of new technologies, including an AI-enhanced iteration of the brand’s P5 picture processor.

We’ve been eagerly awaiting the first sample to roll off the production line – and the finished telly doesn’t disappoint.

If it ain’t broke, don’t fix it. That seems to be Philips’ motto here. The Philips 55OLED805 mirrors last year’s 804 with an ultra thin, dark metallic bezel and two widely spaced feet. You’ll need some wide furniture to accommodate the screen (that’s if you’re not wall-mounting, of course), but at least these boots are chromed and substantial. 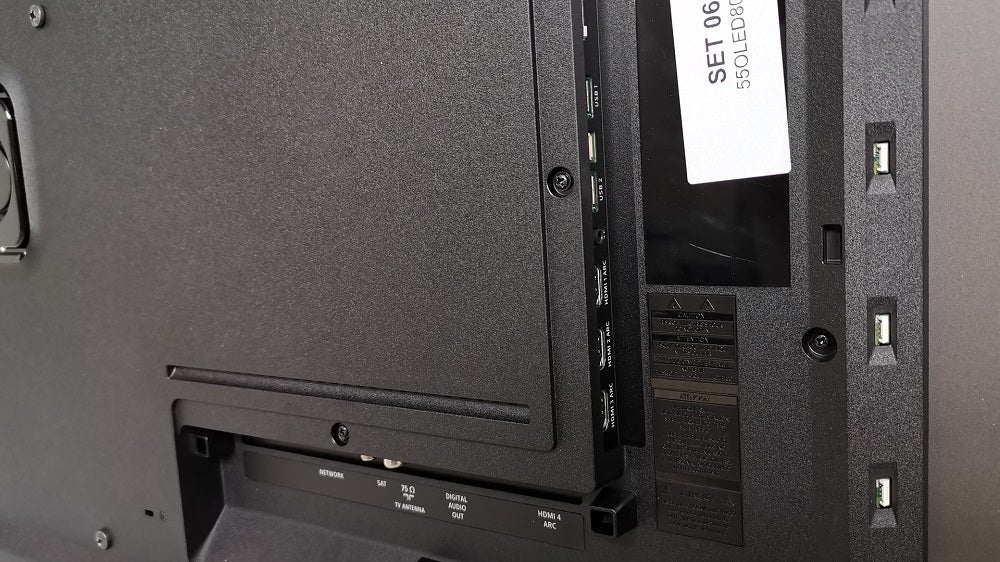 Also new with the 805 is a fancy backlit remote control, finished in a Muirhead leather wrap. 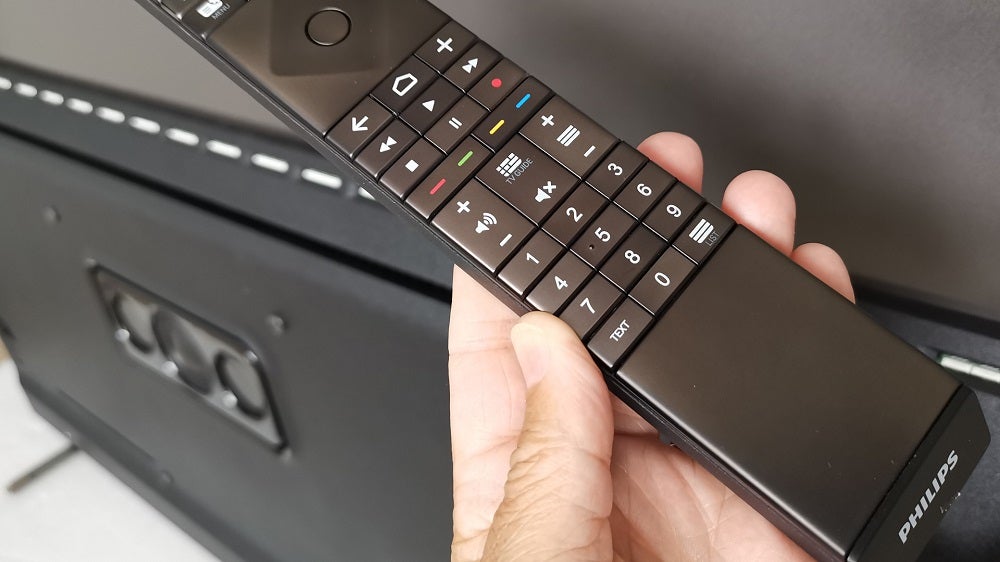 While all the HDMIs are ready for full-fat 10-bit 4K sources, they’re not 4K@120fps enabled. With both the PlayStation 5 and Xbox Series X consoles not out, this shortcoming may become significant down the road. Both next-gen consoles can output high frame rate 4K games, but they are few games available that take advantage of this feature. so little to worry about for now.

Unlike Philips entry-level OLED754, the smart TV system employed here is Android (in its V9 guise). It comes partnered with Freeview Play, which means you’ll have access to a full hand of catch-up TV players (BBC iPlayer, ITV Hub, All4, My 5), as well as all the key streaming services, including Netflix, Prime Video, Disney+, and YouTube.

There’s also Chromecast built-in, so you can easily cast from mobile to TV with compatible apps, and voice control compatibility via Google Assistant and Amazon Alexa. 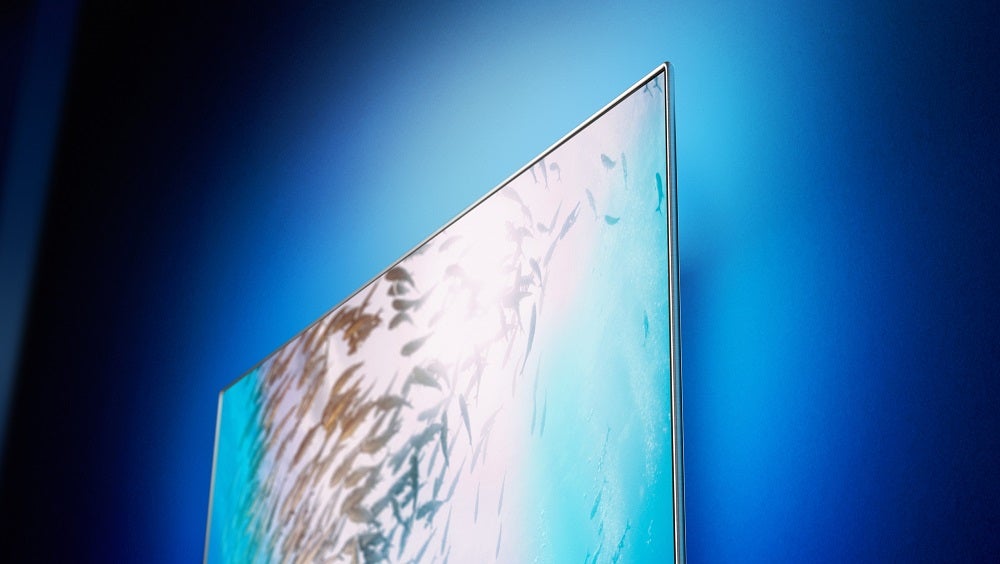 The Ambilight implementation is three-sided, which is very much the norm, but there’s some subtle changes afoot.

New feature Ambisleep aims to send you off with a warm glow. It’s a companion to the Sunrise mode, introduced last year, which offers a faux sunrise lighting effect. Both seem to assume that the 805 will find itself in bedrooms, or that we routinely sleep in our living rooms.

The Ambilight Follow Colour mode, which allows you to cast a solid light onto surrounding walls, rather than have it change dynamically to match TV content, has also been renamed Lounge Light. 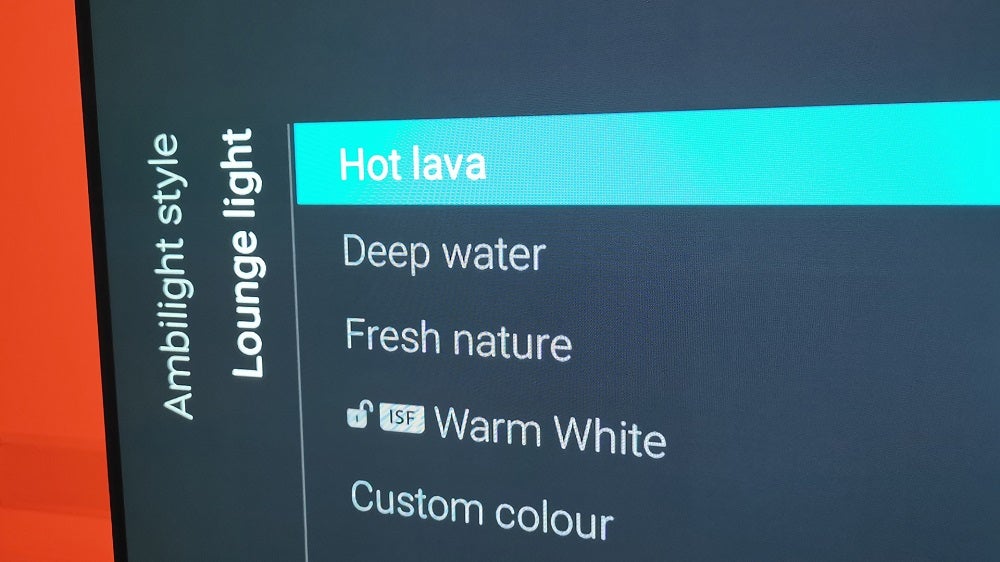 The Philips 55OLED805 is the first Philips TV to offer DTS Play-Fi compatibility. This means it can integrate with other Play-Fi  wireless speaker systems, for whole home multi-room streaming. The Play-Fi standard has gained some traction in the US, but has yet to make much of a dent elsewhere against the likes of Sonos and HEOS. But this collaboration could well change matters. It’s certainly a welcome feature addition.

If joysticks are your thing, though, the story isn’t so winning. Input lag was measured at a relatively poor 33.2ms (1080/60), and that’s with Game mode engaged.

Philips P5 picture processor has proved its worth on numerous screens, but with the advent of AI image enhancement, this fourth-gen version offers a whole new take on image fidelity.

Auto AI with dynamic image optimisation is designed to take the faff out of image presets by managing image processing based on content. By and large, this works well. 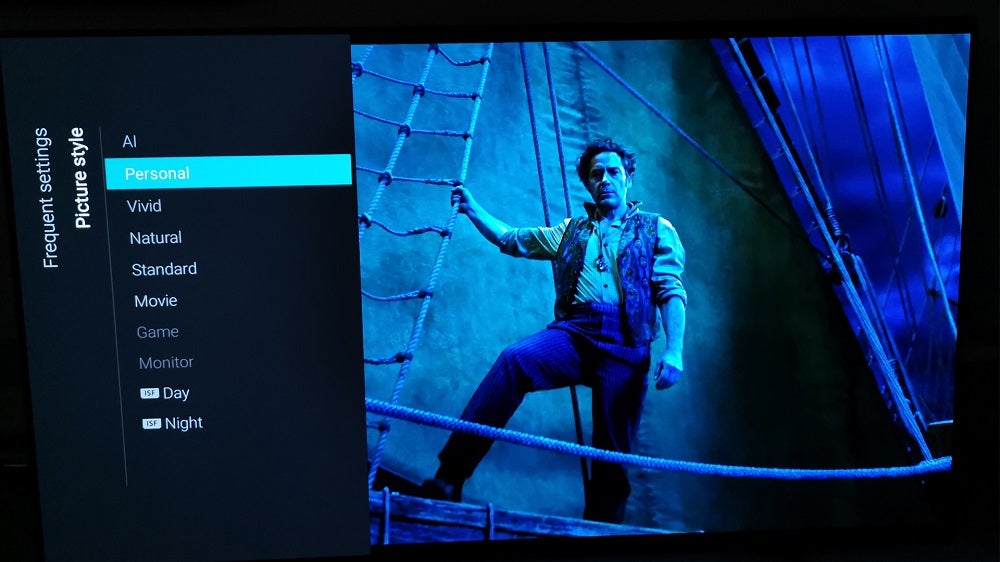 With most content, it’s akin to watching a smarter Vivid mode. When viewed up close, it can seem a tad too lively, but take up a normal viewing position and it looks stunning.

The 805’s HDR performance is impressive. We measured a peak brightness of 900 cd/m2 (nits), which is bright enough for effective glinting reflections and lighting effects.

Unfortunately, the screen doesn’t support the new Dolby Vision IQ setting, which auto adjusts HDR playback to compensate for ambient room light, but we do get Filmmaker Mode…sort of. This isn’t accessible via a dedicated button on the remote control, as we’ve seen from Panasonic, but can be triggered by an FMM metadata flag in content. As this isn’t around yet, Philips advises enthusiasts to use its Movie preset. 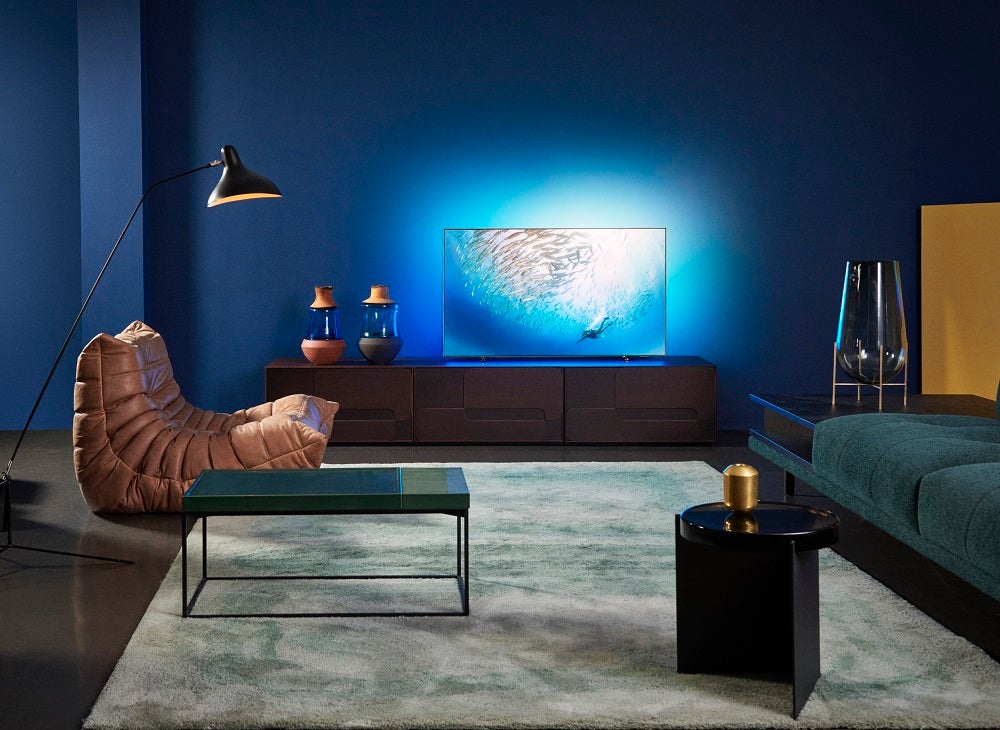 As you’d expect, the black level, and near-black level performance of the 805 is breathtakingly fine. Perhaps surprisingly (given that the brand likes to push the chroma envelope), Philips has detuned the oversaturation of hues in its Vivid mode, compared to last year, but the end result remains very palatable.

The other big change to picture performance this year can be found in its motion handling. Sport interpolation has gone completely, while a new Pure Cinema mode manages to maintain clarity yet keep a sense of cinematic judder. It’s a best-of-both worlds approach for film fans.

That errant Sports motion mode, in case you’re wondering, has been subsumed into the Movie mode, which comes with catch-all low level de-judder and de-blur. So picture wise, the 805 is an almost total joy.

Audio wise, the set equips itself very nicely. Once again, there’s been a revamp of what was heard on last season’s 804, with reshaped drivers and boosted bass.

For everyday use, it cuts the mustard. The set is also Dolby Atmos compatible, and can bitstream immersive audio out over ARC to a waiting soundbar or home cinema system.

You should buy the Philips 55OLED805 if…

Ambilight is a second siren that’s difficult to resist.

You want a TV that covers all the HDR formats

Whatever HDR content you watch, the Philips will be maximising as much of it as it can

Forward thinking hardcore gamers though may be better off with a panel that sports at least one HDMI input that supports 4K/120fps – but we admit, this is a niche niggle.

The Philips 55OLED805 misses out on gaming features such as VRR and HFR (also known as 4K@120Hz).