While expensive compared to other recent 55-inch OLED TVs, the Panasonic HZ1500 is capable of some quite remarkably accomplished images from any source and with an audio performance that’s very agreeable, Panasonic has continued its fine form in the OLED market with the TX-HZ1500.

You only have to remind yourself of our review of last year’s outstanding TX-55GZ1500 to understand Panasonic was unlikely to make a giant leap forward with its replacement, this TX-55HZ1500.

Not as far as picture quality goes, anyway – and especially not when you realise the HZ1500 uses the same Master HDR OLED panel as the screen it replaces.

No, if Panasonic wants the HZ1500 to seem a worthwhile upgrade on the GZ1500 (and to justify the not inconsiderable price increase at the same time), the changes need to come somewhere other than in picture quality. On the face of it, it’s going to be tricky to pull off.

From the front, the Panasonic HZ1500 is pretty much ideal: it’s almost all screen. The neat single-piece bezel surrounding the panel is slim and smoothly contoured, while along the bottom of the screen there’s a very tidily integrated soundbar. If you don’t want to hoist the HZ1500’s 25kg bulk onto a wall, it’s supplied with a compact-yet-weighty swivel stand. 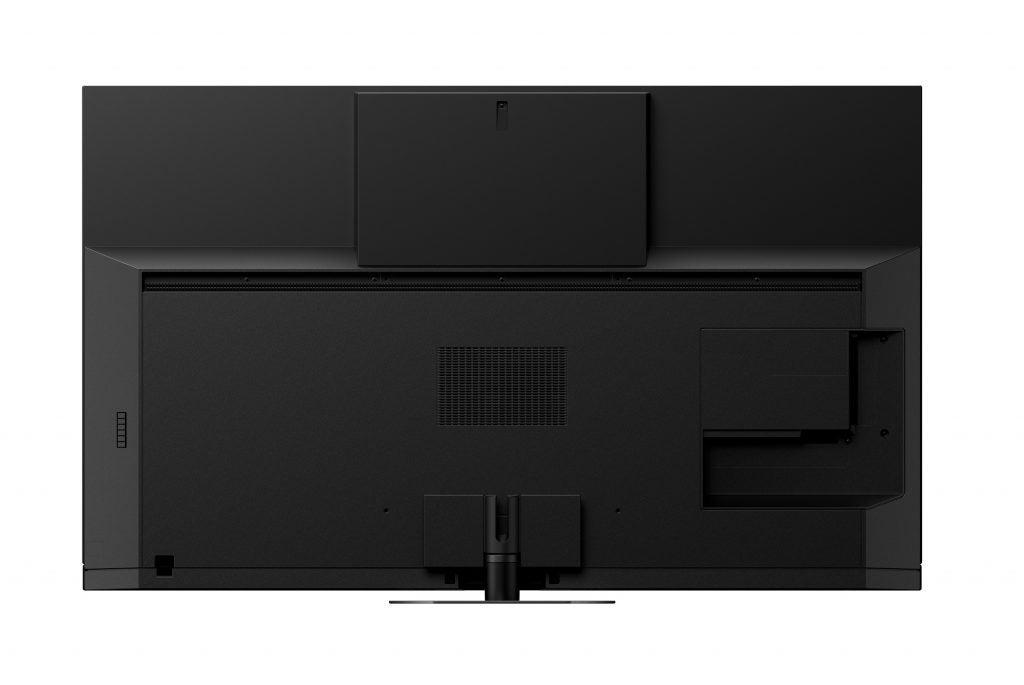 From the side, it’s a slightly different story. Part of the appeal of OLED TV technology is how unfeasibly slim the screens are – but, of course, that’s only until you encounter the area of the screen where all the electronics, input sockets and everything else that make it function as an actual television are housed. Then even the slimmest OLED bulks up somewhat.

The TX-55HZ1500 bulks up more than most OLEDs when viewed in profile. Part of that is because of the usual considerations of inputs, mains power and so on – but part of it is down to the HZ1500’s audio system. A good deal of the Panasonic’s nigh-on 6cm depth is explained by the presence of two upward-firing ‘racetrack’ speaker drivers arranged in a sort of tower at the back of the screen. 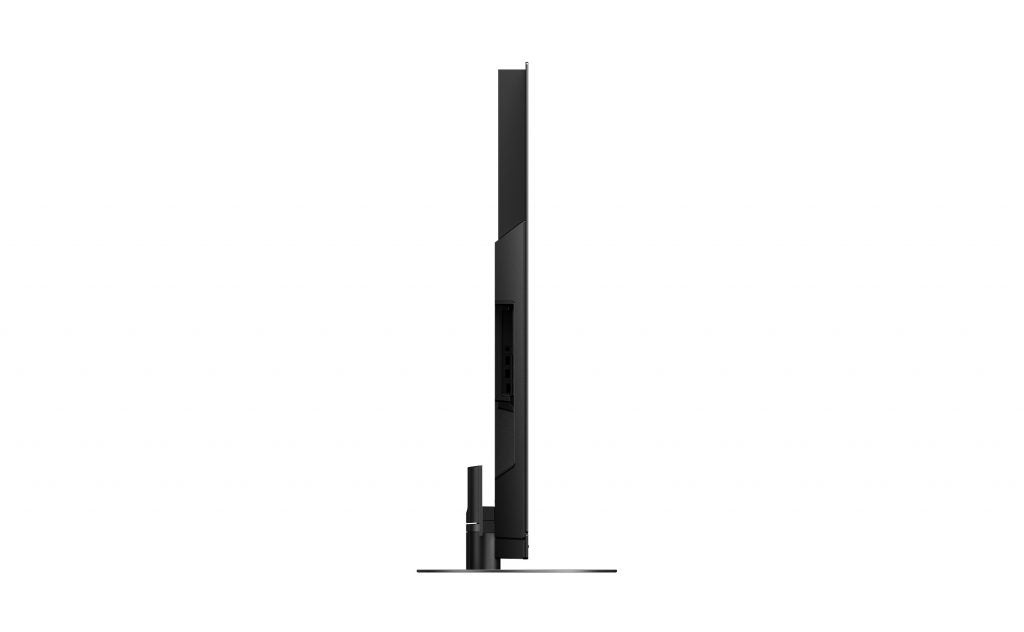 Each is given 15 watts of power (the same as the two identical forward-facing drivers arrayed in the integrated soundbar), and they’re designed to bring a meaningful sensation of height to Dolby Atmos or DTS:X soundtracks. The remaining 20 watts of the HZ1500’s allocation of 80 watts of power are taken by an integrated subwoofer.

This is an unarguably elaborate audio system compared to the outgoing TX-55GZ1500 – it’s the first meaningful point of divergence between the two screens, and the first attempt to properly differentiate them.

Options for getting content into the Panasonic HZ1500 are predictably numerous. As far as physical connections go, there are four HDMI HDCP2.2 sockets, one with eARC functionality and all with Auto Low Latency Mode capability, too. That’s it for HDMI 2.1 specification, so next-gen gamers should think long and hard about whether this Panasonic is for them.

Then there are three USB inputs (one of which is at 3.0 standard), terrestrial and satellite tuners, an Ethernet input, composite video sockets and a CI slot. Naturally enough there’s Wi-Fi on board too, as well as push/pull Bluetooth compatibility. The ability to use wireless headphones when enjoying some TV viewing is not to be underestimated.

Because Panasonic seems to be less idiotically tribal than a number of its nominal rivals, the TX-55HZ1500 enjoys universal HDR compatibility: HLG, HDR10, HDR10+ and Dolby Vision standards are all catered for. It’s also packing Dolby Vision IQ, which uses the screen’s integrated light sensor to adjust picture brightness on the fly. 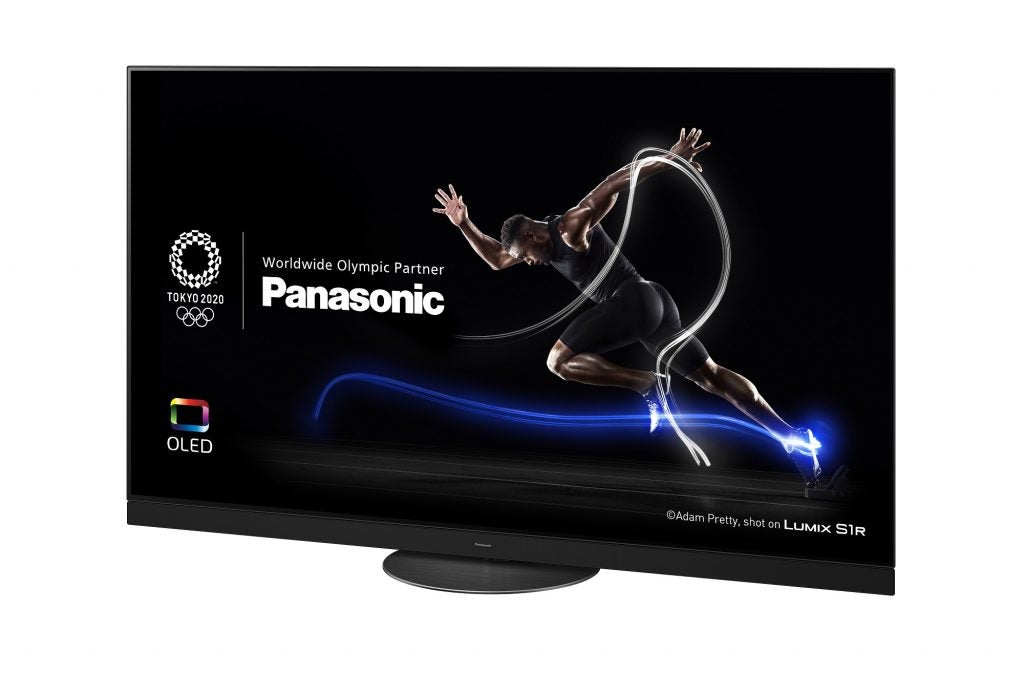 Panasonic’s ‘my Home Screen’ user interface is now in its fifth generation, and here it’s as simple and easy to follow as a big-print book from the library. It’s relatively straightforward to customise, too, which means it can easily be made to do what any sensible user wants from an operating system: follow your instructions rapidly and then get out of the way. This compares very favourably with the Android TV equivalent, which seems to think it’s the most important thing about the TVs it’s fitted to.

Freeview Play is on board, which means a nice logical programme guide and every UK TV catch-up service is present. Most streaming service apps are available too, though Disney+ is a notable absentee.

Navigating the user interface, the predictably thorough-yet-simple set-up menus can be done a number of ways. Panasonic’s remote control, for example, is simple enough and doesn’t feature too many tiny buttons – although it’s remained fundamentally unchanged for so many years now it’s surely due a refresh. Or if there’s a mic-equipped smart speaker on the same network, the HZ1500 can be used in conjunction with Amazon Alexa or Google Assistant.

Just because the Panasonic HZ1500 uses the same panel as last year’s GZ1500, it doesn’t automatically follow that this new Panasonic will be off the pace. In practical terms, a great OLED TV from 2019 doesn’t become a lemon just because it’s now 2020. And make no mistake, the TX-55HZ1500 is a great OLED TV.

The 4K Blu-ray remaster of Stanley Kubrick’s The Shining illustrates the point perfectly. It features both HDR10+ and Dolby Vision dynamic metadata HDR on the disc (presumably to make things easier for those who didn’t have the foresight to purchase an HDR-agnostic TV), and as a film it poses challenges of every kind to the television it’s being displayed on. These are all challenges the Panasonic rises to with gusto. 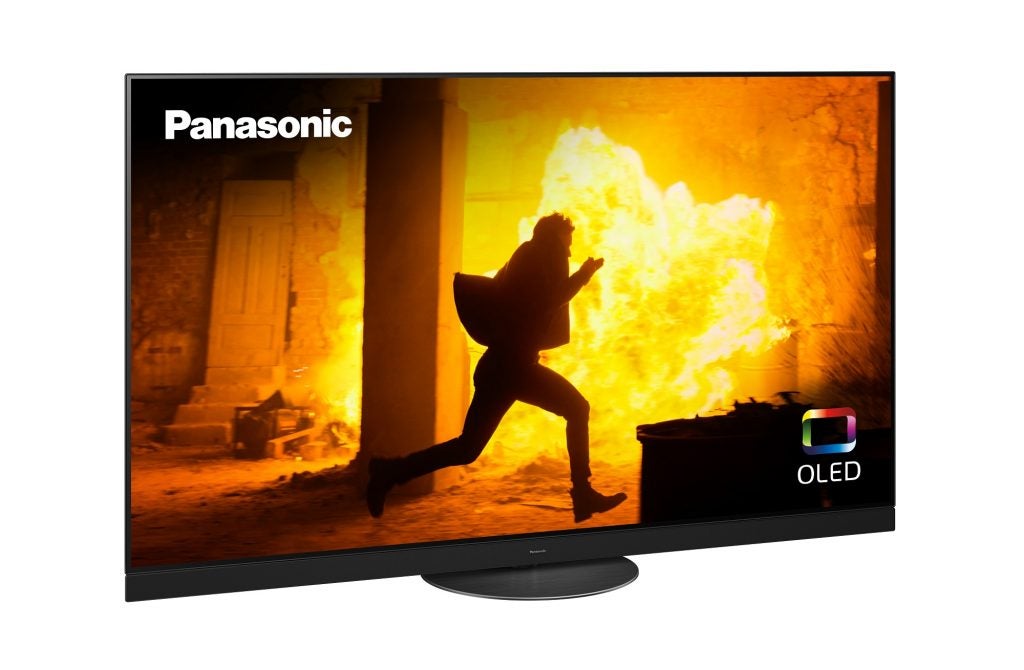 There just isn’t an area of picture-making at which the Panasonic HZ1500 doesn’t excel. It generates extremely wide contrasts, with deep, lustrous and epically detailed black tones at one end and clean, bright but not overdriven whites at the other. It’s capable of very subtle variations in both black and white without impacting on detail levels or looking in any way forced or unnatural.

Even in a vintage movie such as this, there’s nothing in the way of picture noise to distract from the Panasonic’s abilities. Even in wide-open scenes of uniform colour, images are quiet, and edges are drawn with the steadiest of hands. A little finessing in the set-up menus is needed to get motion-tracking just so, but invest the time and even the slowest, most testing pans are delivered smoothly. Intricate patterns, complicated textures, psychotic skin-tones… none of these things, which lesser screens can struggle terribly with, cause the HZ1500 any problems at all.

The Panasonic combines these super-wide contrasts, stratospheric detail levels, militaristic control of movement and edge definition, and wide-ranging and entirely believable colour palette, into images that are endlessly watchable. The HZ1500 has absolute authority over the content it displays, and consequently is completely absorbing. 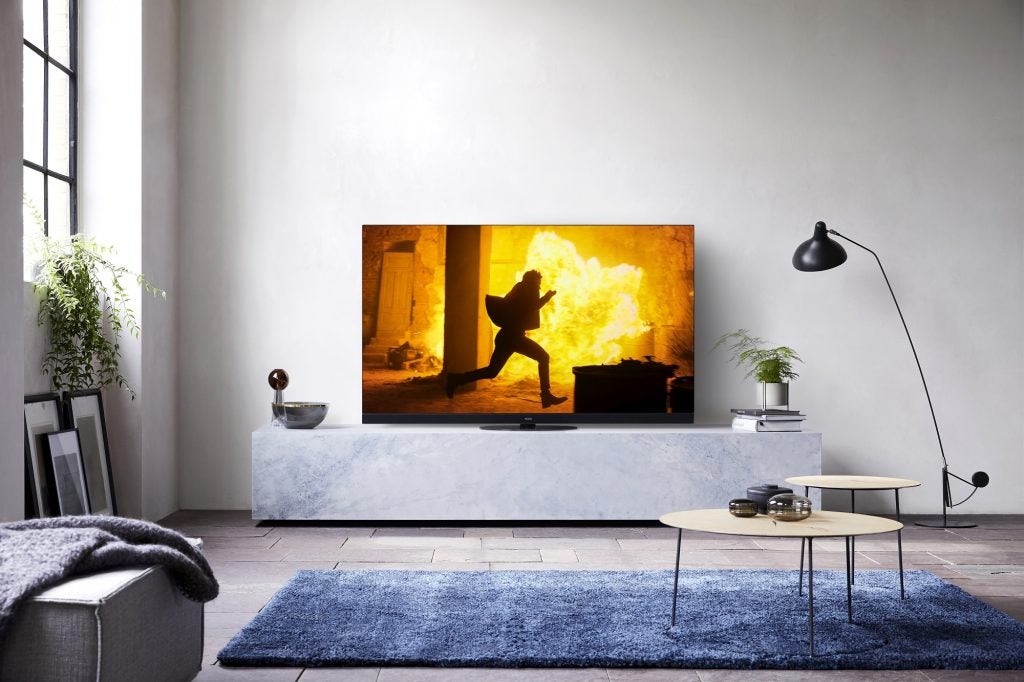 Step down in quality to a 1080p Blu-ray of Andy Lau’s Infernal Affairs and the HZ1500 proves a very adept upscaler too. Drop-offs in quality are mild: there’s a suggestion of picture noise during the most uniform scenes, and a mild softening of skin-tones in particular – but in broad terms the Panasonic performs admirably. Even properly antiquated low-resolution stuff (something in 4:3 aspect ratio that ITV4 likes to show in the middle of the day, for example) is reasonably well composed, even if it’s like watching through a frosted window after viewing some native 4K content.

Dolby Vision IQ proves its worth throughout, with relevant content enjoying a nicely judged level of brightness – no more having to close the curtains to enjoy optimum picture quality. And, while we’re talking of curtains, it’s best to draw a veil over both Filmmaker Mode and Netflix Calibrated Mode. I honestly cannot see any advantage in either.

At this point, it’s important to remind ourselves that everything’s relative. Yes, considering it’s ‘just’ a flatscreen TV, the Panasonic HZ1500 sounds quite big and bold. It’s got genuine low-frequency presence, it’s surprisingly dynamic, and the midrange is plenty detailed enough to make voices distinct and characterful. It even has a degree of bite and attack at the top of the frequency range. 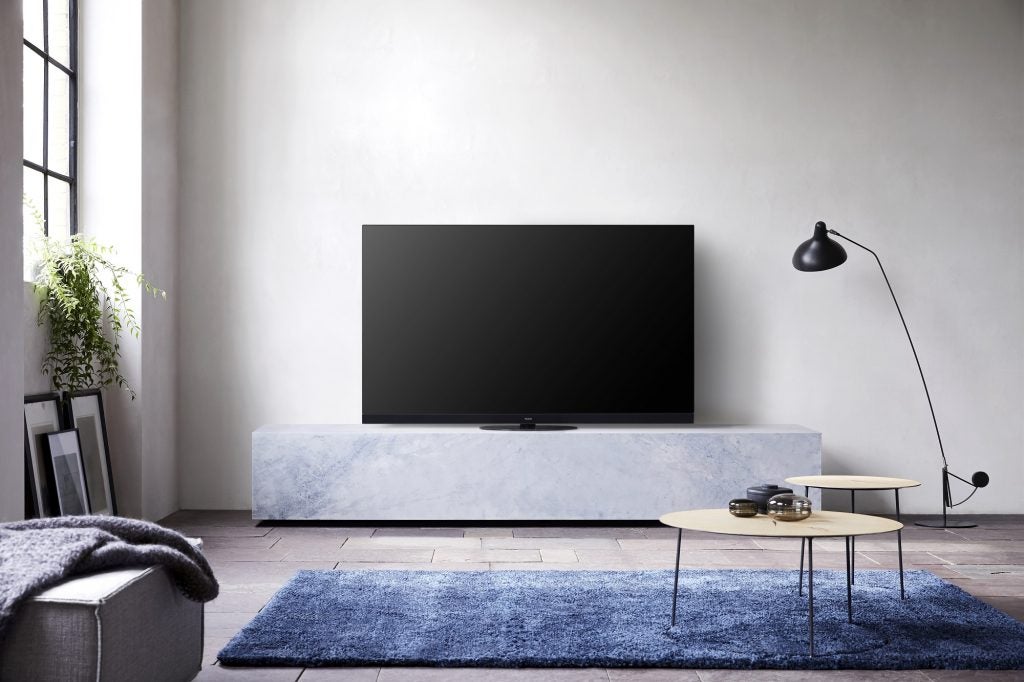 But if you’re expecting an actual Dolby Atmos-style object-based presentation, with sound occurring above your seated position as well as to the left and right, you’ll be underwhelmed. Yes, the Panasonic’s sound comfortably escapes the confines of the screen, and the amount of height those upward-firing drivers can generate is, at times, quite startling. But, sonically, everything that happens is happening in front of you. So, it’s not all that much like Dolby Atmos at all.

But, again, everything is relative. This is an audio system integrated into the chassis of the TV itself, and by those standards it’s an accomplished and quite impressive listen. It certainly means you don’t immediately have to budget for a soundbar to try and bring your audio experience into line with your video experience.

the Panasonic is capable of quite remarkably accomplished images and from any source.

It covers all HDR standards (which, to be fair, a more affordable Philips does too), and it has almost all the catch-up and streaming services you could ask for.

While Panasonic’s claims for the HZ1500’s audio set up are slightly optimistic; the fact remains that it sounds a sight better than most alternatives.

This is an expensive 55in TV, no two ways about it. You only have to look at some very capable 55in OLED alternatives from the likes of LG or Philips to realise that.

Aside from ALLM, there’s none of the new-fangled gaming features onboard the HZ1500.