What is the Motorola Moto E?

The Motorola Moto E is a slightly smaller, slightly cheaper alternative to the Moto G, the highest-selling phone Motorola has ever made.

For around £80 you get a simple, pretty high-quality mobile with fewer cutbacks than you’d see in a Samsung phone of the same price, and none of the odd design choices common to lesser-known brands like Huawei and ZTE. It’s not quite as market-shaping a device as the Moto G, but it is another bargain.

The Motorola Moto E is a very simple-looking, non-showy little phone. Its body is plastic, there are no particularly attention-grabbing design quirks and it cares much more about feeling comfortable in-hand than being super-thin.

At 12.3mm thick the Moto E is a chunky little mobile, but the smooth curves of the soft touch back are a delight. It’s a fair bit softer-feeling than the Moto G too.

Other than being smaller – but tubbier – than the Moto G, the main design difference is the use of little silver bars above and below the screen. These initially appear to be decorative – they’re not buttons – but they are actually outputs for the phone’s speakers.

The top one houses the earpiece speaker, the lower one the main speaker. It’s a cunning way to incorporate a front-facing speaker output without having to make the thing absolutely tiny. More on whether it’s any good later.

Thanks to these silvery bits, the Moto E has a marginally less slick look than its bigger brother, but this is still a phone that could easily pass for something twice the price. It’s more of a looker than the obviously bargain basement Samsung Galaxy Fame (a phone that is admittedly getting on a bit). 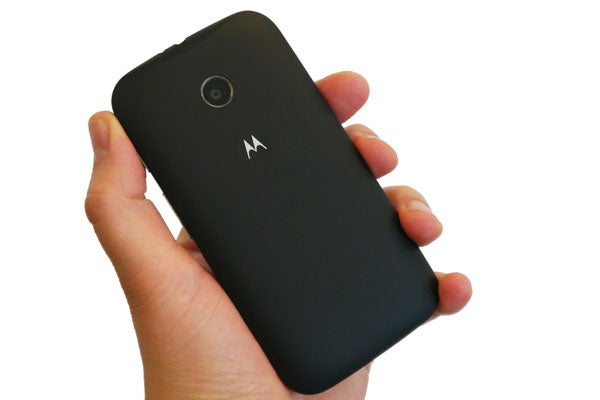 One of the Moto E’s big aesthetic wins is that it does not use separate soft keys. They’re built into the Android software instead. While this cuts into the available screen space, it helps give the phone a simple and pure look.

Well, that and Motorola’s refreshingly ego-free approach to hardware design. “Motorola” is not written anywhere on the phone, and there is just a small Motorola logo in a neat finger-friendly indent on the phone’s rear. Both the Moto G and Moto E have a simple design that doesn’t come across as anonymous or boring: great work on Motorola’s part. 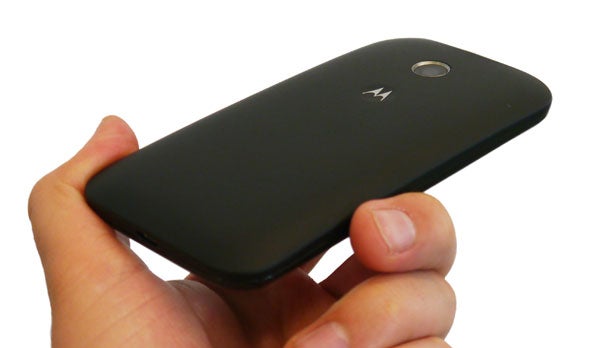 There are some very welcome finishing touches, too. The Moto E screen’s top layer is Gorilla Glass 3, a very strong toughened glass we don’t normally see in phones this cheap. And there’s a special coating to the phone’s exterior (its core part, not the battery cover) that provides some water resistance. As a result you can’t remove the battery, but it’s a compromise that makes sense for the sort of buyer the Moto E is aimed at: it’ll likely survive an accidental dunk in the bath or sink.

You only get 4GB of internal memory with the Moto E, and this becomes a serious roadblock when trying to install some data-hungry. However, there is a memory card slot under the rear cover. Still, not all games simply let you install to SD. It’s one of the phone’s more irritating compromises, making the card slot more useful for storing music and video files than anything else.

Those used to high resolution phones will notice the slightly more jaggedy edges of text characters, and a lack of fine detail in games. 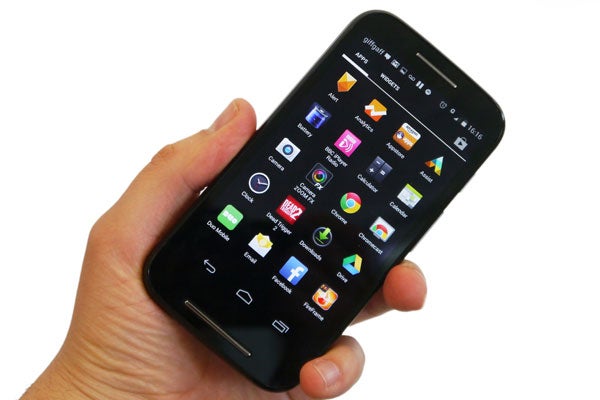 Is it a big sacrifice for the sake of £20 or so? Yes, but the Moto E display can still go head-to-head with phones that cost upwards of £150. At £80 it’s class-leading. Many far more expensive phones than the Moto E ‘make do’ with a similar 960 x 540 pixel screen.

Image quality is good too. Colours are well-saturated among sub-£150 phones, contrast is good and viewed straight on black level is marginally better than the Moto G. Viewing angles are a bit weaker, though. There’s a bit of brightness loss at an angle, although we doubt many will try to share a screen this size anyway. 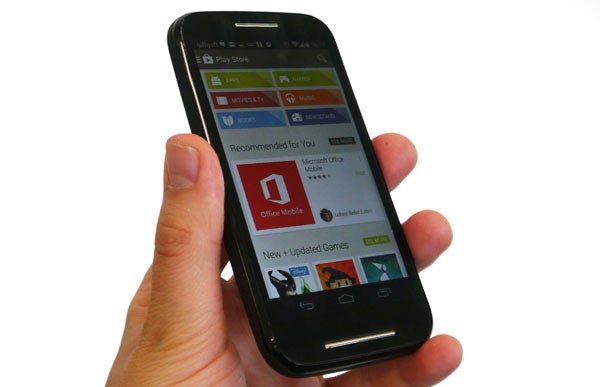 As much as there are compromises, once again Motorola has made the right choices with the Moto E display. Resolution is slightly limited but general image quality is well in excess of what we traditionally expect at the price. But, yes, the Moto G is better.