What is the Samsung Galaxy Fame?

The Samsung Galaxy Fame is a 3.5-inch budget handset targeting the first-time smartphone user that’s available in blue and white. It runs Google’s Android 4.1.2 Jelly Bean OS and is a low-end sibling to the Samsung Galaxy S4. It’s fighting a very different battle to the S4, however.

Besides NFC, it lacks any headline grabbing specs or features, and is free on a £17 a month contract. With a 1GHz single-core processor, 3.5-inch touchscreen, and a 5-megapixel camera, the Samsung Galaxy Fame competes with the wallet-friendly likes of the Sony Xperia J, Nokia Lumia 620 and the LG Optimus L5 II. It’s available in blue and white.

The Samsung Galaxy Fame design is not particularly attractive. Its squat, albeit functional, figure does nothing to hide the Fame’s budget nature. Neither does its hardened plastic body, which appears to take pointers from the Samsung Galaxy S3, nor the thick bezel that dwarfs the 3.5-inch screen.

Still, its round edged, pebble shaped design sits comfortably in the palm of the hand, almost engulfed in fact due to its small 3.5-inch screen. The oversized likes of the HTC One or Huawei Ascend Mate this is not. Measuring in at 11.6mm thick and 120g in weight, the Fame is neither particularly slim nor light, but it is small.

It’s often hard to keep the physical controls out-of-the-way of stray fingers on small phones, but Samsung has overcome this potential pitfall, just. Although the Fame’s power and volume controls still sit in the way of fingers and thumbs, there is enough resistance in the controls to avoid pesky unintended presses.

Despite the price and less than inspiring design, the Samsung Galaxy Fame is surprisingly well-built. There’s little bend or flex when put under considerable amounts of pressure, even with a removable back plate. All the same, we would not be keen to drop the Fame from any notable height onto a hard surface. 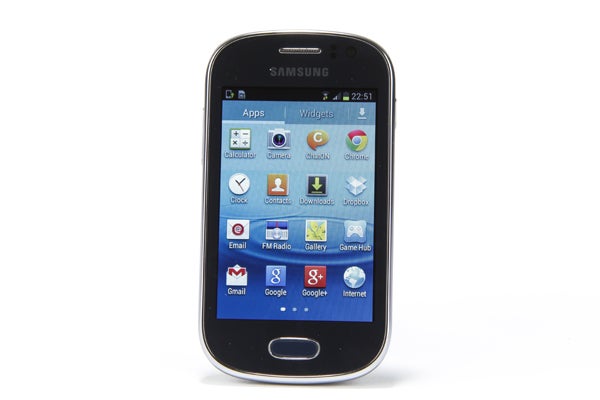 So the design is merely so-so, but the Fame’s screen… here we have a problem. In fact, the Samsung Galaxy Fame’s screen is a disaster.

Its 3.5-inch frame has a lowly a 480 x 320 resolution, equivalent to 165 pixels-per-inch image density. Web pages, photos and text look grainy and disappointing as a result. Moreover, it falls a long way short of similarly priced (on contract) rivals like the Nokia Lumia 620 (246ppi), and LG Optimus L5 II (233ppi). Even Samsung’s own, and similarly priced Galaxy Ace 2 (246ppi) topples the Fame’s dire screen.

It’s not just the sharpness, colours appear washed and meek, too. It’s the polar opposite to the Super AMOLED displays found on many of Samsung’s more premium handsets, which tend to over exaggerate colours.

When the likes of the iPhone 4 and its 3.5-inch retina screen are available for just £3 a month more than what you would pay for the Samsung Galaxy Fame, it is hard to justify opting for such a weak offering. Indeed, the Fame’s screen is matched bu much cheaper £50 phones like the Alcatel One Touch 983. 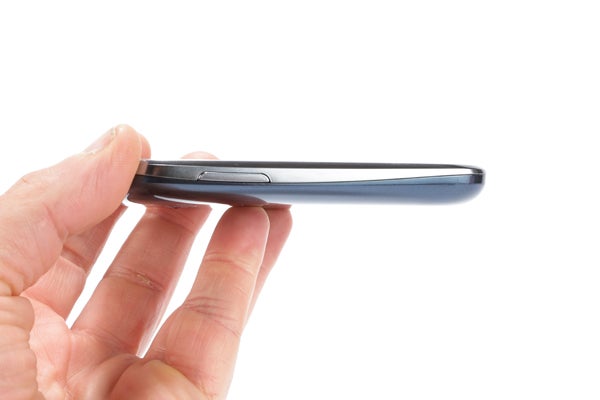 The Samsung Galaxy Fame is sluggish, even for an entry-level phone, despite running the relatively recent Android 4.1.2 Jelly Bean OS. While scrolling between homescreens is pleasingly smooth and fuss free, any further demands come with a stutter or lag.

Its 1GHz single-core processor and limiting 512MB of RAM are the main culprits. App load times on the Samsung Galaxy Fame are agonisingly slow, with even the most basic of functions (call menus, calculator, contacts) preceded by an unwelcome pause. Even switching from portrait to landscape feels like you have asked too much of the Fame, with a considerable amount of lag once again creeping in.

The Fame’s virtual keyboard is cramped and squashed together. Somehow, however, it’s just about satisfying to use. Although confined, the small keys are well placed, helping ensure mistakes and accidental key strokes are kept to a minimum. It’s a small comfort given the sluggishness elsewhere, though.