The LG G2 mini is small in name but not so in stature.

The spinoff handset follows in the footsteps of the Samsung Galaxy S4 mini and HTC One mini – borrowing the branding of a flagship Android phone while moving to a smaller footprint and reduced spec.

With UK pricing and availability still to be announced, I had a play with the LG G2 mini at MWC 2014, the phone’s first formal outing, to see if it could succeed where
previous spinoffs have failed.

Although smaller in some aspects than its high-end predecessor, the LG G2 mini is bigger in others. Having dropped half an inch in screen size, the phone has picked up almost 1mm in thickness, jumping from 8.9 to 9.8mm.

While the LG G2 mini didn’t feel particularly fat when I was holding it, the slightly podgy plastic body is certainly lacking some of the G2’s more premium appeal. This added thickness, although relatively little, also makes the phone feel noticeably cheaper, having clearly dropped from a high-end to a mid-range level of effort.

At 121g in weight, the G2 mini sat comfortably in my hand, with the sizeable, plastic device offering only small amounts of unwanted give when placed under pressure. 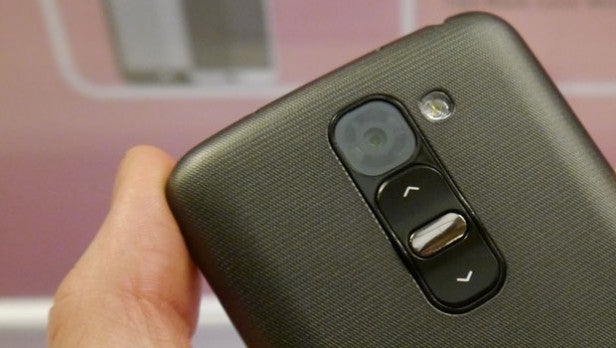 Not all of the G2 mini’s design changes are negative, however. LG has made a number of fine-tuned improvements to the LG G2 mini. Overall the phone’s newly textured rear felt extremely comfortable in my hand, with the crosscut pattern offering added grip.

Elsewhere the rear-mounted volume and power keys felt more accessible and less of a stretch to access than on the G2 or LG G Flex. The phone will launch in black, white, red and gold colour schemes.

Disappointingly, one of the LG G2’s best design features, its super slim bezel, has disappeared from the mini. Although only adding fractions of millimetres to the phone’s boarder, this added thickness takes the lustre off the handset’s screen. 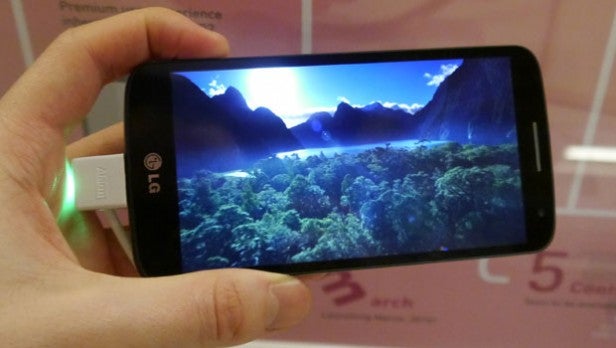 Size aside, as with the S4 mini, the LG G2 mini’s screen has left me disappointed after first use.

A former highlight feature of the flagship G2, the mini’s screen has a lowly 960 x 540 pixel resolution. This drop, from a stunning 1080p Full HD panel, is a major let down and one that falls short of even a 1280 x 720 resolution – as found on the HTC One mini and the even cheaper Moto G.

Although images are more than passable at arm’s length, closely analysing the screen and individual pixels can easily be picked out. I found that pages of text most notably highlighted the G2 mini’s reduction in screen quality.

A reduced resolution is not the only black mark against the G2’s screen, either. Video playback resulted in some noticeable motion blur and brightness and contrast levels are also down on the G2. What’s more, given its added size, the G2 mini’s screen has a lower pixel density than either the S4 mini or HTC One mini at 234ppi.

Image quality issues aside, I found the LG G2 mini screen to be highly responsive, with touch control reactions hard to fault. This came in useful when sampling some of the phone’s new capabilities. 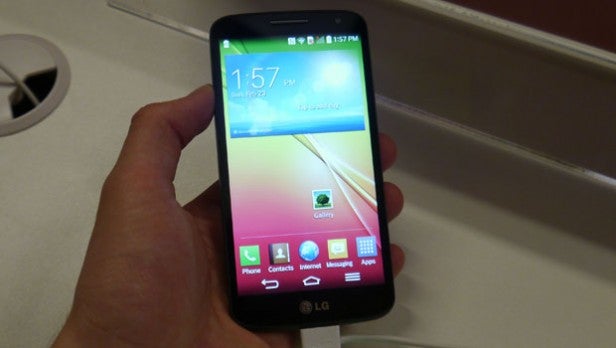 As with the G2, the LG G2 mini sees Google’s Android OS paired with the company’s own UI. The new handset runs Android 4.4.2 KitKat and adds a new UI trait in the form of Knockcode.

A touch-based security measure that builds on the G2-introduced KnockOn unlock mode – a feature that lets you double tap the screen to wake the device – Knockcode allows you to use between two and eight positional screen ‘knocks’ to unlock the phone.

Doing away with passcodes and swipe-based unlock patterns, I found Knockcode to be a novel, highly effective and secure method for unlocking the device. Although heading to the G2 as an update, the LG G2 mini will be the first handset to boast the new Knockcode functionality from the box.

There is little else new with the G2 mini’s software. However, given the handset’s reduced spec, we did notice some slight lag and stuttering when navigating the OS.

With screen transitions adding very fractional amounts of lag, app launches were not performed with the usual zippiness we have come to expect from the mini’s big brother.

The cause of this lower performance is the phone’s slower processor. Unlike the Sony Z1 Compact, which has retained many of the Z1’s key features, the LG G2 mini has been skinned to the bone and rebuilt with cheaper parts.

As well as the phone’s screen going from highlight to average inclusion, the G2 mini’s CPU has been significantly scaled back. Dropping from a 2.3GHz quad-core snapdragon 800 processor to a slower and less advanced 1.2GHz quad-core Snapdragon 400 offering, the G2 mini has its limitations.

Paired with 1GB of RAM, this new CPU handled standard tasks admirably, but when tasked with jumping in and out of multiple applications I did note some minor stuttering. The G2 mini features 8GB of internal storage, expandable via microSD to 64GB.

One feature that the G2 mini has, somewhat surprisingly, maintained, is its Infra-red receiver. This means the phone can still be used to control your television if so desired.

With an 8-megapixel primary camera paired with a 1.3-megapixel snapper for selfies, I found the G2 mini’s cameras to be distinctly average. Although retaining a number of core camera modes (HDR, panorama, beauty shot) early test shots – admittedly in harsh artificial lighting – produced images that were particularly flat and grainy.

Due to the phone’s non-mini size, the LG G2 mini has one trump card over its S4 and HTC One mini rivals, battery capacity. The phone’s 2440mAh Lithium-polymer battery should offer strong battery life into the days rather than hours. 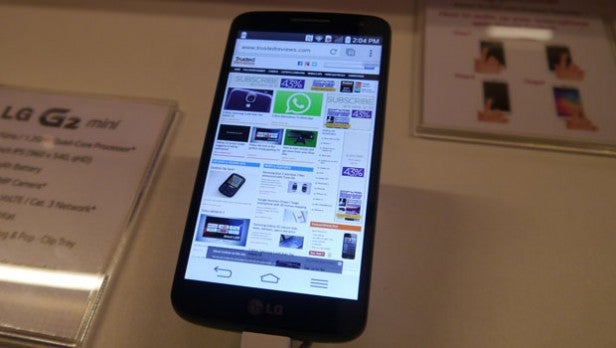 The LG G2 mini is a handset that could have, and should have wowed. Instead I’ve been left frustrated with yet another leading manufacturer that has failed to make a truly representative flagship spinoff at a size that is appealing to the masses. After first use I would say that, if you can afford to, don’t wait for the mini to hit stores, splash out on the LG G2 now instead.