The Motorola ‘no bloat, no big ego’ approach to phone design continues with the Motorola Moto E’s software. It uses an almost untouched version of the latest edition of Android, 4.4.2, and Motorola promises it will get an update to the next major version of the system.

Vanilla Android is simple and performs well even with the humble hardware used by entry-level phones like the Motorola Moto E. When flicking around the interface, the phone isn’t really much slower than the Moto G. It is not the lag-fest seen in some other low-cost phones. 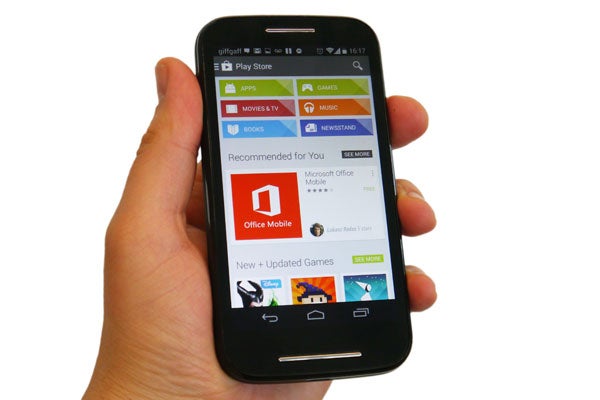 As it doesn’t have a load of extra apps installed, your main go-to bits of software will be Google’s own app suite – Gmail, Google Maps and so on. For other basics like Facebook and Twitter, you’ll need to take a visit to the Google Play app store.

As long as you have some basic tech knowledge, this is no bad thing as it gives you more of the Moto E’s limited internal memory to play with. Of the 4GB storage, about 1.6GB is left for apps, games and the rest. It’s less than 50 per cent of the total, but more than you’d get with some other 4GB phones.

There are just three apps added by Motorola, two of which were in place when the Moto G launched in 2013. A closer look: 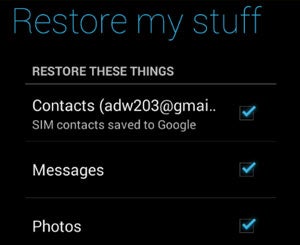 This app takes content and settings from your old phone to your new one. The way it works is pretty simple. You install Motorola Migrate on your old phone, and run the app to identify it as your ‘mobile to be replaced’. Then you run Migrate on your new phone and select what content you want sent over wirelessly.

You can transfer contacts, messages, photos, videos and music. It’s a neat idea for less experience mobile users, and is executed well. 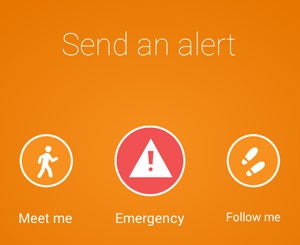 This is the latest Motorola app. It lets you identify emergency contacts, who you can send a message to upon signalling an emergency through the app. You can also let the Moto E share your location with your emergency contacts when you’re in certain pre-specified places. You might want an alert to go off when a Moto E-owning child reaches school, for example.

Alert makes a good deal of sense when you look into a core potential audience for the phone – kids. 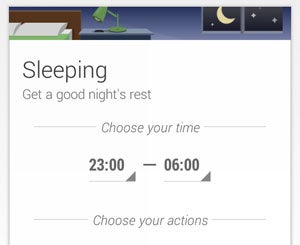 Another app also seen in the Moto G is Assist. It’s probably the most useful of the three apps for most people. It lets you set certain times when notifications won’t go off (most likely at night), and can also cross-reference with your Google Calendar to disable notifications when you’re in meetings.

This won’t work for everyone – people use calendar events for things other than meetings – but setting a “bed time” for your phone should appeal to many.

Despite being a cheap phone, you should be able to use virtually any Android app with the Moto E. It use of specs seen in many other phones (more expensive ones too) and its virtually guaranteed destiny as a super-popular mobile mean you don’t have to worry about compatibility.

It’s only really with games that we start to see some of the compromises of the Moto E’s reduced specs – it has a dual-core 1.2GHz Snapdragon 200 chip, a low-end processor.

While perfectly capable of playing some very impressive-looking games at full speed, those that are quite taxing or not well optimised for lower-end phones will chug a bit. Dead Trigger 2 looks great on the Moto E – surprisingly so – but the frame rate drops when there are multiple enemies on-screen or when the environment opens up a bit.

Similarly, if you up the draw distance in Minecraft to max you’ll see the frame rate drop to distractingly low levels occasionally if there are a lot of objects on-screen to render. Much like our observations of the Moto E’s screen, we think these sorts of performance trade-offs are acceptable in an ultra-budget phone, but keen mobile gamers should think about spending a bit more to get the Moto G, which has far less obvious performance restrictions thanks to its quad-core CPU. 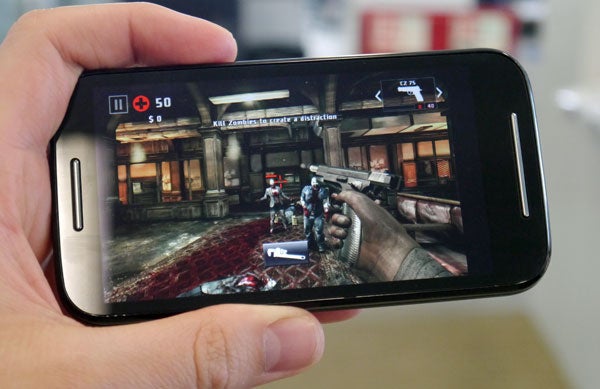 The Moto E can hack high-end games, with occasional slow-down

Benchmarks make the reasons for the performance dips obvious – the Snapdragon 200 is not a super-fast processor. In Geekbench 3, the Moto E scores 600 points (323 per core), around half the score the Moto G achieves. The Galaxy S5 scores around 2850 points, and is a good top-end bar-setter.

This disparity is exactly what we’d expect too as the Snapdragon 200 and Snapdragon 400 (used by the Moto G) have similar Cortex-A7 architectures, but where the Moto G uses four cores, the Moto E has just two. When power is needed, the Moto E hits the wall far sooner than the Moto G.

With just 1GB of RAM, you can expect to see some more general performance issues creep in if you’re not careful about keeping a good amount of memory free too. This is a phone that can only take so much of a beating before the bruises start to show. But keep its duties light and you’ll have no problems, and virtually no performance issues.