Apple blew everyone away when it showed off the A7 processor on the iPhone 5S a year ago. The dual core 64-bit processor wiped the floor with the quad-core and octa-core competition. The 5S still runs like a dream on iOS 8, which shows that there’s still plenty of life left in the A7, but Apple has never released a new flagship iPhone without boosting the processor. It’s obliged once more with the A8 in the iPhone 6 and 6 Plus.

Again looking at the specs alone there doesn’t seem to be a huge boost in performance. The A8 packs a dual-core processor running at 1.4GHz, which is only slightly up when compared to the 1.3GHz A7. The PowerVR GPU from Imagination is also a quad-core, just like the previous iteration, not a hexa-core (that’s six cores) as some have reported.

Regardless, Apple has managed to make some significant performance improvements. The iPhone 6 scores more than 25% higher in our graphics benchmarks and 10% more in our CPU test when compared to the 5S. Apple claims the wins are even higher with a 25% boost on CPU and 50% boost on graphics performance in some use cases.

What does all this mean in real terms? It means that the iPhone 6 is fast – very fast. 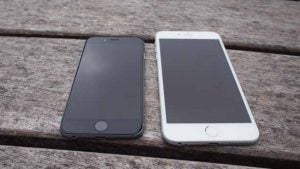 You’ll notice the performance too. Touch ID, Apple’s fingerprint recognition feature, is noticeably quicker when unlocking the phone. Zipping through menus and opening apps is as slick an experience as ever. If you’re a bit of a mobile gamer then you’ll really enjoy playing the latest 3D games with all the extra graphical effects on the larger screen.

The only issue we experienced with performance has to do with certain apps. The Facebook app, for example, jerks and judders in use. We suspect this may be down to buggy iOS 8 update to the app, which should be resolved soon.

M8 Sensor Co-processor
There has also been an update to the co-processor that looks after all the data captured by the iPhone 6’s sensors. As well as keeping track of the accelerometer, gyroscope and compass, the M8 co-processor looks after a new sensor – a barometer. The iPhone 6 can now measure altitude, which means it knows when you’re going up stairs and can provide that information to fitness tracking apps.

The M8 co-processor is also a lot more energy efficient than the main processor for these tasks, which is good news for the iPhone 6’s battery life. For example, it can also recognise if the phone has not moved in a long time and stops it pinging the network to look for signal when there is none. This stops the iPhone 6 leaking battery if it’s sitting in a locker at the gym, for example.

The iPhone 6 comes with the usual gamut of mobile connectivity you would expect from a flagship phone such as Bluetooth, AirDrop, and Wi-Fi 802.11ac, which is up to three times faster than the Wi-Fi on the 5S. It also comes with one of the most comprehensive 4G offerings available with 20 channels supported. What does this mean for you? It means that you should get excellent 4G coverage in most places in the World.

One of the things about iPhones that sets Android users to finger wagging mode is their lack of microSD card slots. The iPhone 6 is no different – if you want extra storage for your music, apps, photos and movies you’ll need to pay for it up front.

The 16GB iPhone 6 costs £539/$649 contract-free, which is cheaper than the iPhone 5S was at launch but that only leaves you with around 10GB of free storage after iOS 8 takes its cut. There is no 32GB version this time round – the storage option we would normally recommend. Instead the iPhone 6 jumps to 64GB for £619/$749, which is actually cheaper than the 32GB iPhone 5S started at.

This is the iPhone 6 to get unless you desperately need shedloads of storage. If you do you can opt for the pricey 128GB option for £699/$849.