If you’re short of time and need to get off then all you need to heed is this, the iPad Air 2 is the best tablet we’ve ever reviewed. Apple has done it again and improved on the already excellent iPad Air (that’s remains on sale for a lower price) from 2013.

It is brilliant but don’t expect it to do anything new or anything different. The iPad Air 2 is still a tablet, not a tablet/laptop hybrid, and so it won’t quite serve as your fix for both productivity and entertainment like, say, the Microsoft Surface Pro 3. On the other hand it’s a lot cheaper, and the Apple app store has a superb array of quality apps that let you do pretty much anything you want. Pair the iPad Air 2 with one of the better third party keyboards and it becomes a swiss-army knife of tablets.

The iPad Air 2 is a stunning tablet when it comes to design. Even thinner an lighter than its predecessor, Apple has managed to pack blistering performance and 10-hour battery life in a tiny package. The screen has been improved too, in ways that make it a joy to use.

The headline feature on the iPad Air 2 and the iPad mini 3 is Touch ID – a feature that lets you unlock the tablet using your fingerprint. It’s about a lot more than that, though. Touch ID on the iPad Air 2 is all about Apple Pay and making it easy for you to purchase securely online at the touch of a button. Apple Pay is only available in the UK and US only at the moment, however.

The other thing to consider right now is that a new iPad is on the horizon. A new version is expected to launch in October, as is a larger iPad Pro model.

The first iPad Air looks fantastic – the sleek aluminium design a departure from its chunkier predecessors. It’s a tablet that’s easy to handle, but that also has a refined air (no pun intended) of quality.

No reason to change what’s working, so Apple has kept a similar design for the iPad Air 2 – only it’s even better.

The iPad Air 2 is ludicrously thin at just 6.1mm, and light, too, at 437g. That’s a whole 1.4mm slimmer and 32g lighter than last year’s tablet. It’s not an unhealthy skinny, like some Sony tablet. The iPad Air 2 is rock solid – the aluminium back feels strong and has a slight grain that makes it easy to grip. 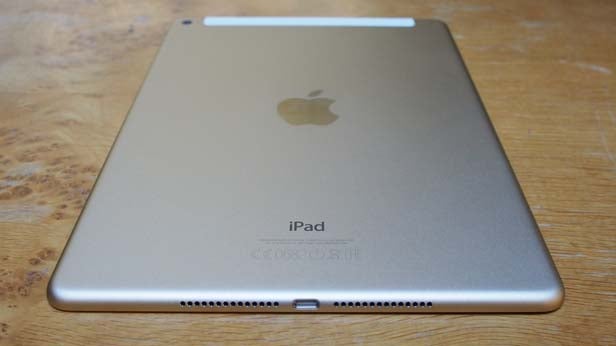 There has been one casualty in Apple’s pursuit of a supermodel figure. The iPad Air 2 is the first iPad without a mute/rotation-lock switch. It’s a sacrifice we’re not fussed about much. You can still easily mute the Air 2 by pressing the volume down button for a second, and lock the screen rotation via the settings menu.

Other than that, the controls are similar to previous models. You get the volume buttons on the right edge and the power button at the top – easy enough to access and use.

The Lightning port for charging and data transfer is at the bottom, flanked by the stereo speaker grilles. It’s not the best location for the speakers, as you can muffle them with your hand while holding holding the iPad Air 2 in landscape mode. We’d prefer front-facing speakers like the ones on the Nexus 9, although in every other respects the iPad is a much better tablet. 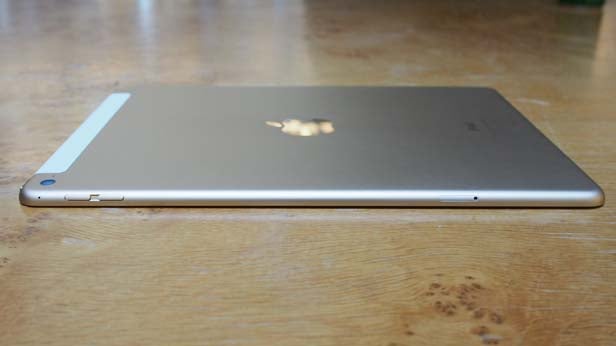 There’s been a new colour added to the space grey and silver versions and it’s gold. It’s not a blinging back-of-an-old-mercedes-tissue-box gold, though. It’s a light gold, almost champagne in colour, and the front bezels are white. Our favourite colour remains the space grey, but it’s a matter of taste only.

Touch ID is Apple’s fingerprint scanner. It works by securely storing your fingerprint on the device, so you can unlock the iPad Air 2 with a simple touch. It’s super-slick but it’s less useful on the iPad than it is on the iPhone 6 or iPhone 6 Plus. Phones are unlocked a lot more often and are used one-handed, so it’s a neat feature on the iPad Air 2 rather than an essential one.

Apple has now allowed developers to hook into Touch ID so these days you can secure all your data on Evernote, for example, behind the peace of mind of your own, unique, biometrics. 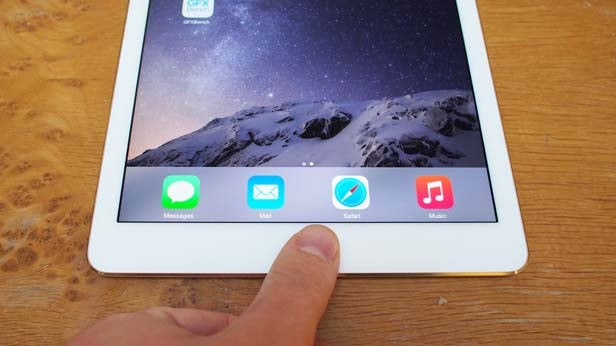 Apple’s key reason behind adding Touch ID it to its latest tablets, though, is Apple Pay. Unlike on the iPhones, which come with NFC, you won’t be able to use an iPad to tap and pay in a physical store. You can use it to buy things online, though.

Add your credit card details to the iPad Air 2 and you’ll be able to use Touch ID to make purchasing dead simple. There are some limitations, though. Currently Apple Pay only works via apps, so you won’t be able to make purchases through a browser.

The other problem is that it’s not available in all regions yet, although you can now use it in the UK as well as the US.