If you’ve never heard of Retina before it’s a term trademarked by Apple. It refers to the resolution of the screen — that’s the pixels per inch (ppi) a display has and the viewing distance you would typically use it from. It means that even if you have perfect vision you won’t be able to spot pixels in normal use.

For the 4.7-inch display on the iPhone 6 that’s 326ppi, the same as every iPhone from the iPhone 4 onwards barring the iPhone 6 Plus, which packs 401ppi.

There’s no denying that the iPhone 6’s screen lags behind the competition if you look at numbers alone. It won’t win at Top Trumps. The resolution of 1334 x 750 pixels pales when compared to the QHD 5.5-inch display on the LG G3. But just like a camera sensor’s megapixel count this only tells part of the story. 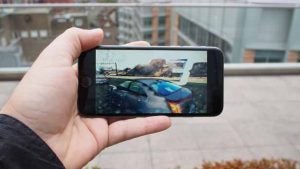 The screen on the iPhone 6 is great, possibly only behind the Samsung Galaxy S5 and the upcoming Note 4 for visual quality.

Colour accuracy is outstanding. Regardless of whether you’re watching a movie or flicking through your holiday snaps, the iPhone 6’s screen displays colours exactly as it should. Incredibly, there’s also no colour shift when you tilt the screen. It’s impressive although the benefits are arguable, you don’t often hold your phone at obscure viewing angles.

Of more benefit is the peak brightness, which maxes out at 558 nits. That’s more than enough to make it viewable in bright sunlight. The screen isn’t reflective either, which helps even more in this respect.

So where does it fall short compared to the Samsung Galaxy S5? Quite simply when it comes down to contrast ratios. The iPhone 6’s LCD screen has twice as high a contrast ratio as the one on the 5S, but it is still an LCD. This means it struggles to display deep blacks. Light bleeds behind pixels in dark scenes and this makes blacks look a little grey. What’s more there is plenty of shift in the grey if you tilt the screen. 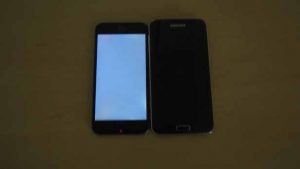 We whacked up the sensitivity of the camera and took a picture of the iPhone 6 (left) and Galaxy S5 in a very dark room playing a video of pure black. The iPhone 6 seeps light, though it’s nowhere near as apparent as this to the naked eye

The Galaxy S5 has the edge here with pitch black scenes and fantastic screen performance in low-light conditions. We still like the colours on the iPhone 6 better, but the contrast prowess of AMOLED is hard to beat.

Give us the choice between the QHD LG G3 and the iPhone 6, however, and we’d take the iPhone every time. It just goes to show that the race for a higher pixel count doesn’t necessarily provide a better experience. 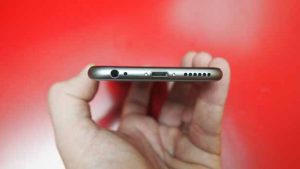 Sound Quality
One area where the iPhone 6 has the Galaxy S5 and LG G3 licked is the speaker. It manages to be louder and clearer than both and is surprisingly good for listening to movies or music if you haven’t got your headphones handy. The speaker grille sits at the bottom, which means you can accidentally muffle the sound with your hand. Other than that Apple has done an impressive job — only the HTC One M8 surpasses it in the phone speaker department.