It’s all about computers this week as we sent one of our journalists all the way to Taiwan to find all the shockingly brilliant and downright bonkers computer-oriented gadgets at this year’s Computex tradeshow.

Rather than make you trawl through our website to find all the hot gossip on Computex, we’ve dedicated this week’s Week in Geek column to the computing showcase so you don’t miss out on any of the big headlines from the last seven days.

Looking to buy a new laptop or just love chatting components? Then read on: 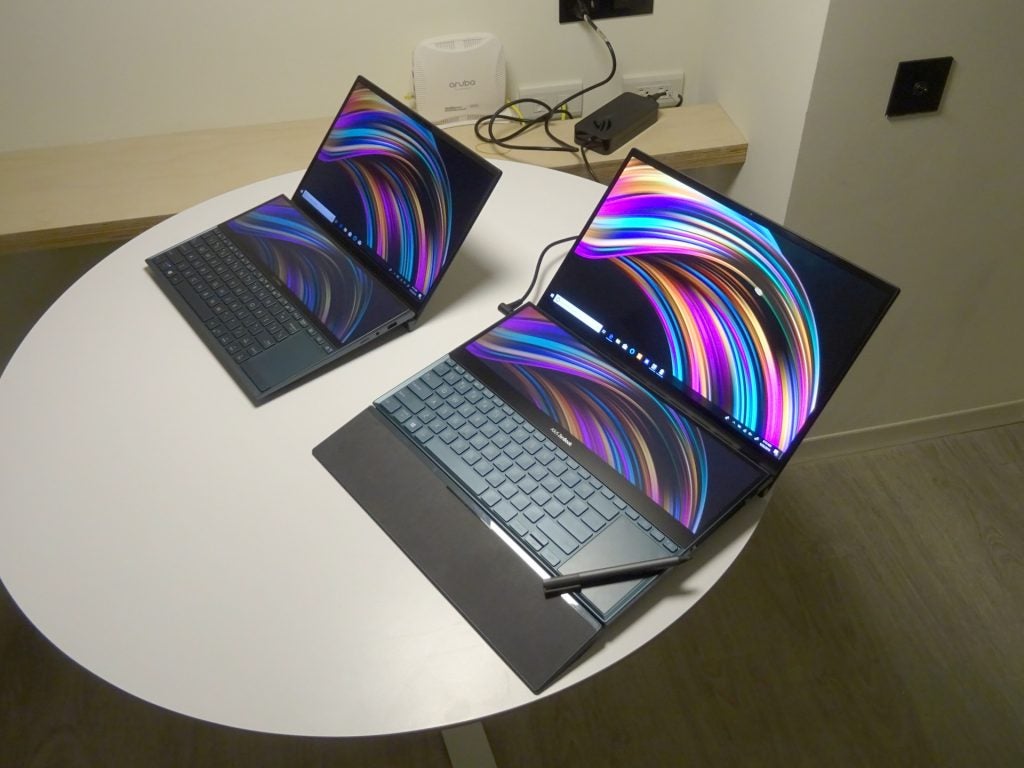 1. Two screens better than one?

Most laptops look identical to each other these days, with all the manufacturers pursuing the skinny lightweight form Apple famously debuted with its original MacBook Air. To make things worse they rarely deviated from silver, grey and black colourings. Yawn. Asus can’t be accused of such boring conformity though, having always controversially flirted with the unconventional.

This year was no different. At Computex 2019 Asus introduced a funky new dual-screen laptop to the world. Looking very much like a Nintendo DS in laptop form, the Asus ZenBook Pro Duo features a unique secondary 12.6-inch FHD panel sitting on the desk just above the keyboard. This second display offers stylus supports and lets  users to throw apps in its direction for multitasking. The possibilities are endless.

You’ll also find a super-speedy Intel Core i9 processor under the hood, and the RTX 2060 configuration will provide a massive boost to the graphical grunt. There’s no word on pricing yet, but expect this thing to be expensive.

The main question is whether the twin screen concept is going to be a game-changing feature or just a gimmick destined for the ‘weird and wonderful’ hall of fame. My money’s on the latter since I’m worried the second display is going to be a whopper of a battery drain. Plus wouldn’t it make more sense just to use a second monitor instead? But hey, at least Asus is trying to do something to liven up the laptop party.

2. Clash of the chips

Apple vs Samsung. PlayStation vs Xbox. Huawei vs Trump. There are countless rivalries throughout the tech world, but arguably the most intense and fascinating face-off in the computing sector is the Intel vs AMD duel. Computex saw this age-old rivalry heat up several degrees, as both companies unveiled brand new processors.

Intel revealed its 10th Generation Intel Core processors, which have already started to ship. What’s more, the first laptops to boast the Ice Lake CPUs, including the revealed Dell XPS 13 2 in 1, are expected to arrive before Christmas this year. These chips mark the first time Intel has been able to reduce the chip’s manufacturing process from 14nm to 10nm, which should theoretically provide a beefy performance and efficiency upgrade.

AMD arguably still has the edge though. Mere hours after Intel it revealed its Ryzen 3 CPUs which boast an even smaller 7nm process. AMD claims the new Ryzen 3900X offers similar performance to the Intel i9-9920X, but for half the price at $499. AMD also confirmed the Ryzen 3 CPUs will be available from 7 July 2019.

AMD had a very busy Computex, as the company also unveiled a new graphics card generation entitled AMD Navi. Not a lot of information was dished out for the upcoming Radeon RX5000 graphics card, although more details are expected at the E3 2019 gaming conference – AMD Navi is likely to be integrated into both the PS5 and Xbox 2. 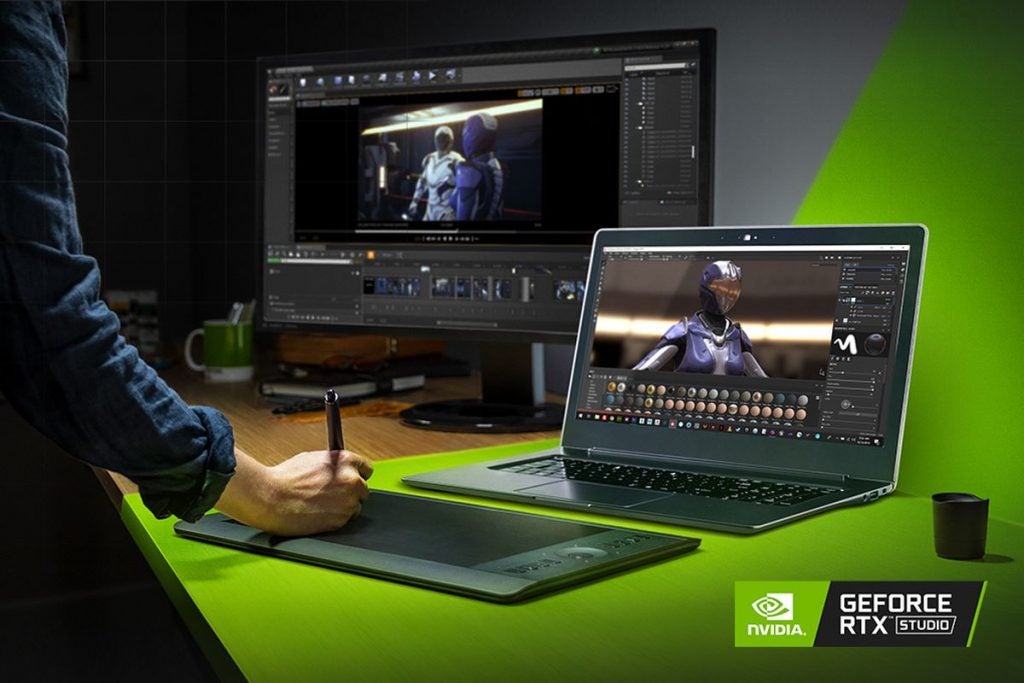 At Computex the company unveiled new drivers to optimise its RTX graphics cards for content creation as a part of a wider Nvidia Studio initiative. The initiative will see a flurry of high-powered creative-focused Windows laptops released to give the likes of Apple and Wacom a proper challenge.

The new drivers will offer a super-fast performance bump when dealing with the likes of ray tracing and artificial intelligence, while the oodles of RAM will enable multitasking with various intensive software applications, whether you’re dealing with video editing, 3D modeling or design work.

A number of Nvidia Studio laptops have already been revealed including the Razer Blade Studio Edition, Acer ConceptD and the aforementioned Asus ZenBook Pro Duo. The best thing about Nvidia Studio though, is you don’t necessary need a Nvidia Studio laptop to get all the perks. As long as your RTX computer meets all the system requirements, you can swap between the Game Ready and Studio drivers as many times as you please. 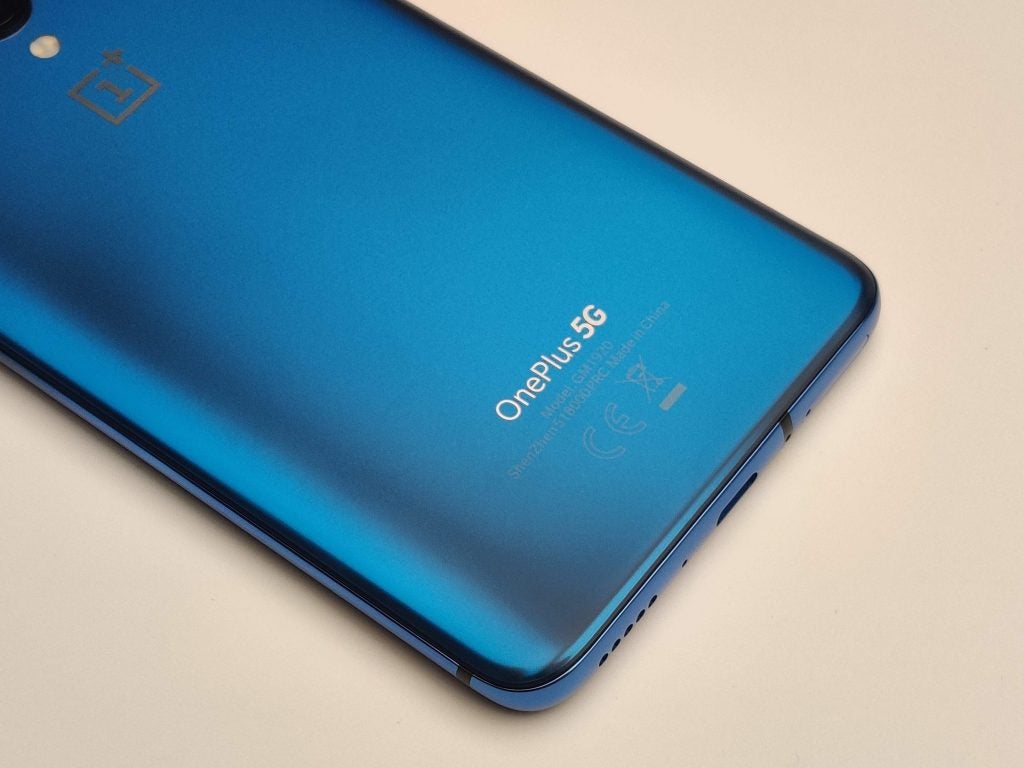 5G probably ranks just behind Brexit as one of the most common words you’ll see on the web in 2019. Unlike Brexit though, 5G has finally been delivered as EE launched the service throughout the UK this week .

The successor to 4G will allow an even faster network connection when you’re away from a Wi-Fi hub. Such a speedy connection should allow users to stream video and play online mobile games without issue or lag, so it will no longer be disaster if you forgot to download Netflix content before a long journey.

Unfortunately you’ll need a 5G phone (as well as a 5G contract) to make use of the super-fast mobile connectivity, with the likes of the Galaxy S10 5G, OnePlus 7 Pro 5G and Xiaomi Mi Mix 3 5G among the wide selection of 5G-compatible smartphones set to release shortly. Continuing the Computex theme, it turns out 5G won’t be exclusive to smartphones with the Lenovo Qualcomm 5G laptop proving computers can get in on the fun too.

While the launch of 5G is no doubt an exciting moment, we still suggest holding back from investing in a 5G phone. As well as the handsets being extremely expensive, they’re also bulky and don’t boast much stamina in the battery department. Most importantly, there’s no blanket coverage just yet, so only the major cities will see the benefit. Don’t forget about us folk in North Wales!

The Week in Geek is a weekly column where the editorial team at Trusted Reviews breaks down the biggest tech news to arrive over the last seven days.