The new Asus ZenBook Pro Duo range sees Asus taking the twin screen idea from last year’s ZenBook Pro range – where the usual laptop trackpad doubles as a display – and running with it.

With laptops like the ZenBook Pro 14, we were introduced to the ScreenPad concept, where the touch of the F6 key would see the trackpad flicker into life and reveal its hidden nature; it was a 5.5-inch Full HD screen where you could throw YouTube videos, media controls and make use of Microsoft Office formatting tools (if you were really that bored).

This time around, Asus has stepped things up several notches, walloping full width secondary displays onto the top half of the laptop’s deck.

As statements of intent go, this is pretty ballsy, up there with the ROG Mothership. Those secondary screens make the TouchBar of Apple’s MacBook Pros look timid by comparison.

That said, the ZenBook Pro Duos don’t look like they’re going to be cheap… 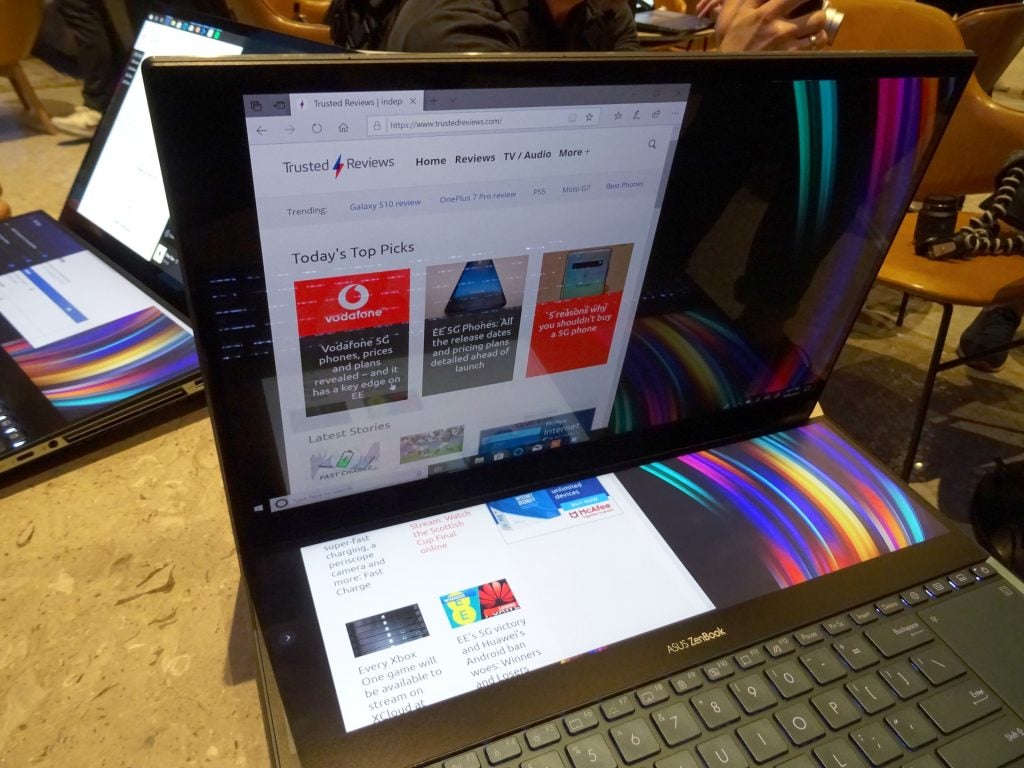 Lots. Prices for the new Asus ZenBook Pro Duo laptops have not been released, but let’s be honest, these things are going to cost a king’s ransom.

Both models feature second displays which are roughly half the size of the main panel. If that wasn’t enough, on the 15-inch model, you’re also getting an eight-core Intel Core i9 processor, Nvidia RTX 2060 graphics and four PCIe SSDs. Confirmed specs for the 14-inch model include a ‘new’ Core i7 processor – most likely the i7-8565U Whiskey Lake processor – and Nvdia MX250 dedicated graphics. Not as powerful maybe, but don’t expect the 14-inch ZenBook Pro Duo to be even remotely cheap.

Release dates for both versions of the ZenBook Pro Duo are still TBC. It’s likely that we’ll hear more in the coming weeks. 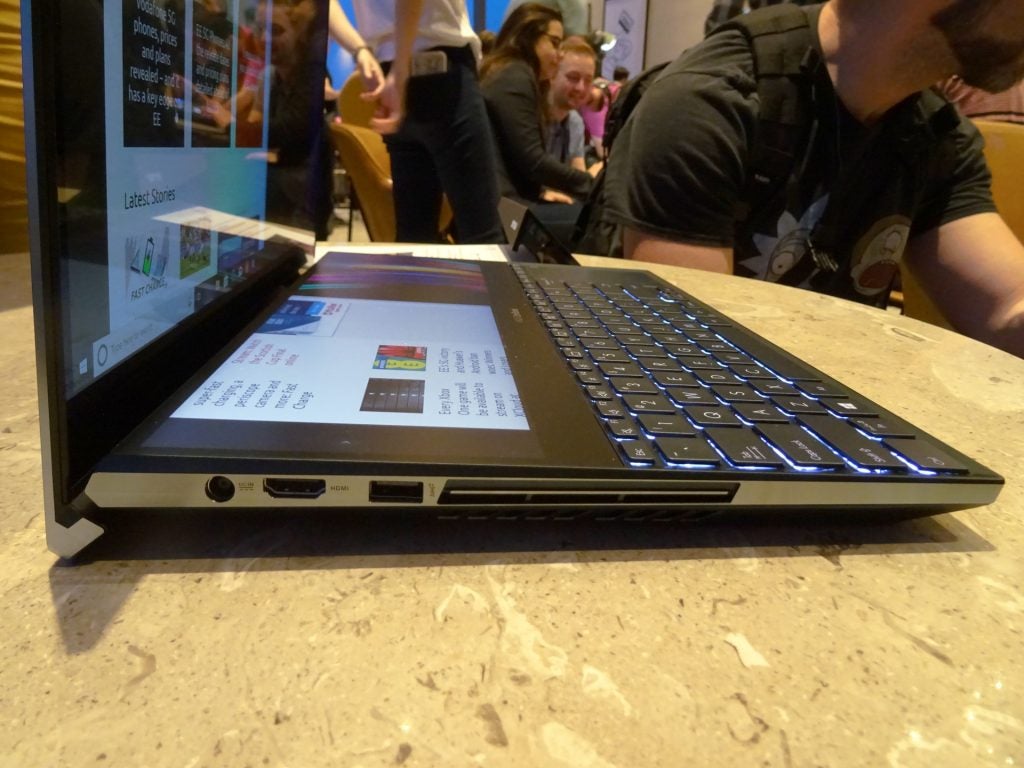 What is the Asus ZenBook Pro Duo?

The ZenBook Pro Duo range is Asus’s new flagship line of powerhouse laptops. Though a full list of models hasn’t been released yet, ZenBook Pro Duos will be available in two main versions, a 14-inch model with a Full HD (1920 x 1080) LCD display and a secondary 12.6-inch FHD panel. The bigger 15.6-inch variant features an OLED 3840 x 2160 as its primary display, and a 14-inch 3840 x 1100 LCD secondary display.

Asus is hoping that videographers in particular will take to this second screen, and shove all of their timelines and toolbars southwards, allowing them to make fine adjustments like colour grading, without on-screen controls cluttering everything up. 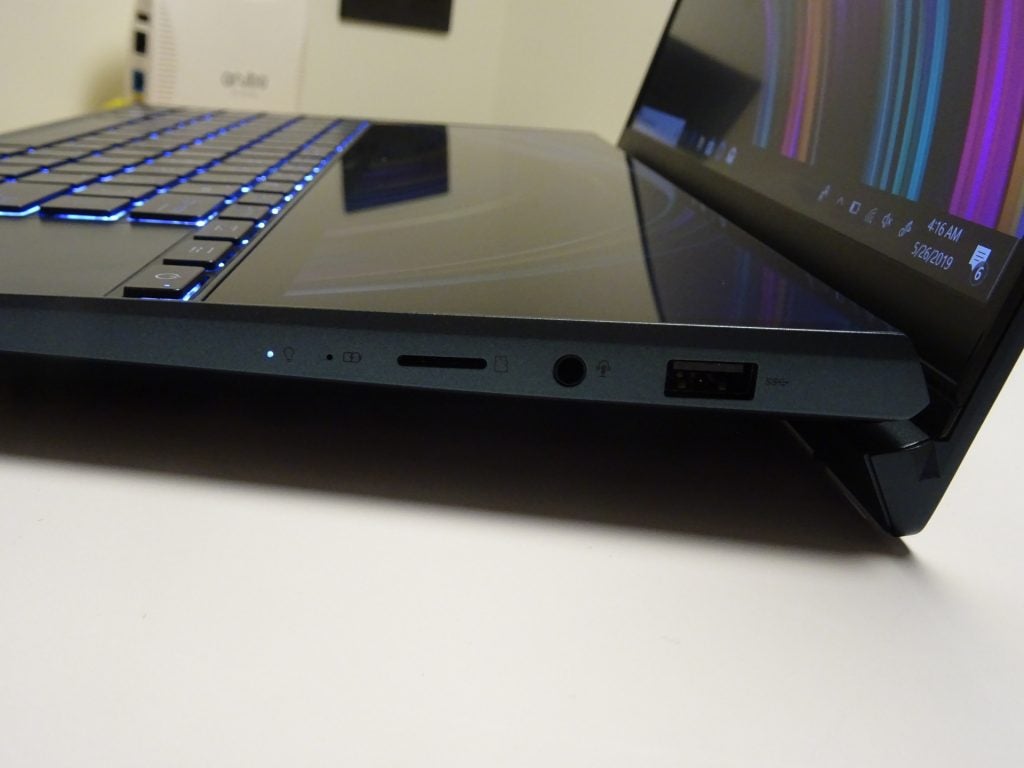 Asus claims the 15.6-inch version, clearly the flagship, offers full coverage of the DCI-P3 colour space, support for HDR video playback and a contrast ratio of 100,000:1. As it’s an OLED-type panel, this means black levels should be (in theory) zero – we can also infer a max brightness of over 1000 nits in that case too.

Those second screens, then. Asus has yet to release full specs, but they’re said to match horizontal pixel count (3840) of the primary panel, and are intended to let you push extra windows, Discord chats, browser tabs and other applications down into a secondary area, freeing up more space for whatever it is you’re doing on the main display – whether that’s gaming, coding, fine photo editing or streaming.

This top-heavy screens to body ratio means the keyboard has been shunted down to the bottom half of the laptop’s deck. A more traditional trackpad sits over on the right-hand side and will, we’re told, also doubles as a number pad – a long press on a control on the top right corner activates the hidden number icons.

Both versions of the ZenBook Pro Duo will let you run multiple apps across both screens simultaneously, the idea being you’ll be able to simply drag and drop any app to the second screen and have it sit there – there’s apparently enough room for three apps to sit side-by-side. 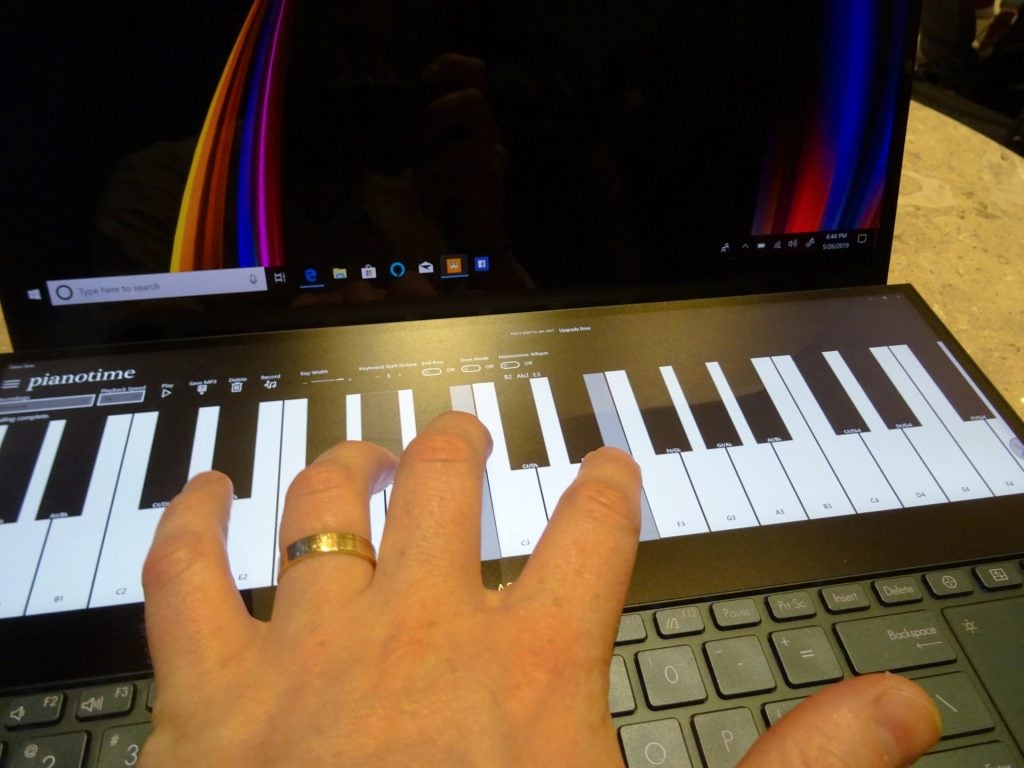 Asus says you’ll also even be able to capture and memorise your workspace arrangement, so you can launch ‘task groups’ in the future.

If you’re working on a series of articles for your site on an online publication, you could have your photo editor open in the main window, editing tools sitting in the second screen, next to an FTP folder or a browser window with your WordPress console, so you can edit, save, and upload more fluidly than usual.

This feature was not available on any of the demo units I saw, all of which are early models and clearly not close to the finished article. Some featured trackpads either didn’t display their numerical keys when activated, or didn’t even work at all.

Also, none of the ZenBook Pro Duo models I saw appeared to let you control the brightness of the second screen. I wasn’t able to change this in the system settings, and nor was I able to find any other options or controls on the device.

Despite the ZenBook Pro Duos being pitched as all-in-one creative hubs, there’s an emphasis on fun too – during a quick hands-on media session at Computex, I was able to mess around with Piano Mate on a 15.6-inch ZenBook Pro Duo, a multi-touch digital piano app. The second screen also supports stylus input – maybe a future drawing program will let you ‘mix’ digital paint on the second screen before applying it to the canvas of the main display. I wasn’t also able to see any games running on these laptops, but in theory, you should be able to play games with friends and have a Discord chat window sitting in the second screen. 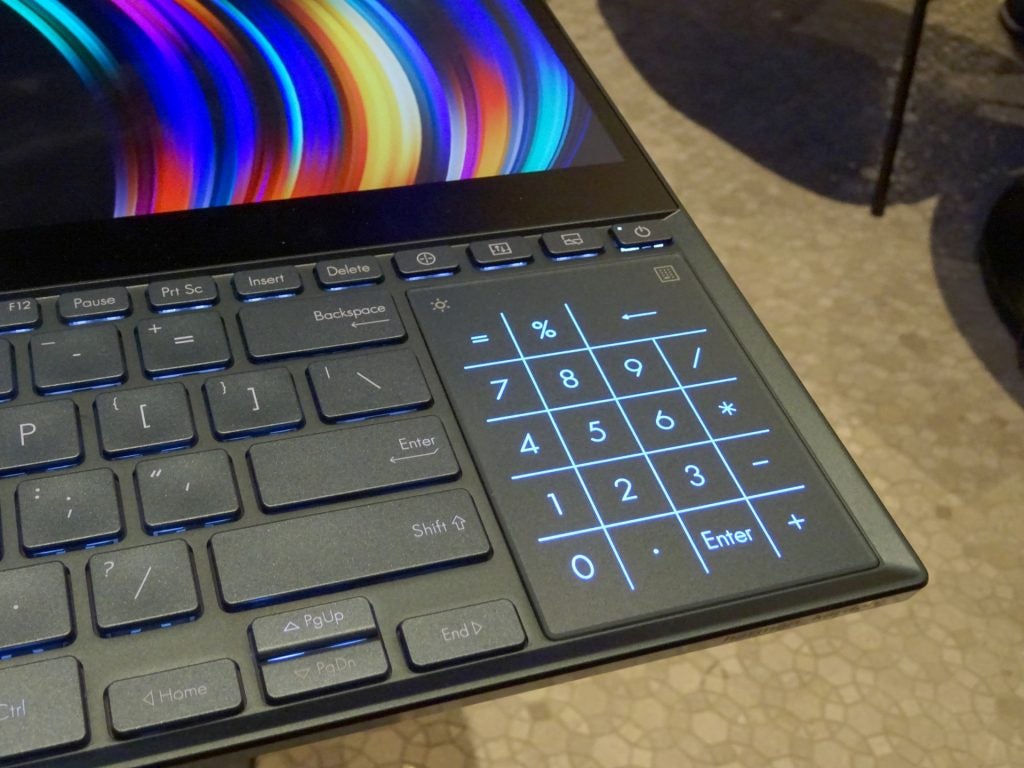 While a full list of specs for the range is still TBC, I can confirm both models will feature two Type-A USB ports, a Type-C USB port with Thunderbolt 3 tech – capable of transferring data at speeds of up to 40Gbps – an HDMI port. The same ErgoLift hinge technology – which raises the profile of a laptop up off of a desk’s surface, allowing for comfier typing (on in this case, touchscreen swiping) and better airflow – that we saw on the ZenBook Pro 15, returns.

That’s great if you really hate the idea of typing on a keyboard so close to the end of a laptop, but it’ll become something else you need to lug around with you, and, there’s no word yet if you’ll be able to get a similar accessory for the 14-inch version.

This range guide will be updated as and when prices, release dates, and more specifications and features are confirmed by Asus.