While much of AMD’s E3 2019 fanfare was given over to the new Navi graphics cards, towards the end of the press conference, CEO and president Dr. Lisa Su unveiled the Ryzen 9 3950X processor – a monstrous-sounding 16-core 3rd gen Ryzen CPU.

Described as a “world first” by Dr. Su, the 3950X features the highest boost frequency in AMD’s current stock of 3rd gen Ryzen CPUs and represents the cream of the crop, as far as Ryzen processors are concerned.

While these scores are certainly eyebrow raising – we managed a 2058 multi-thread score with Cinebench R15 when we tested the Intel i9-9900K – they are pure CPU stress tests, and not really indicative of how a whole system powered by a Ryzen 9 3950X would perform.

Furthermore, AMD was also using liquid nitrogen to cool the chip, so it’s not exactly representative of what a conventional user can expect to get. That price is steeper than a vertical wall too – this isn’t for PC builders looking for a budget option. The raw specs are seriously impressive, and we can’t wait to see what a system housing a 3950X is capable of.

What is AMD Ryzen 3?

The AMD Ryzen 3 is the 3rd generation AMD’s desktop CPU family. This newly revealed Ryzen 3 family includes five processors, with the Ryzen 9 3900X at the top of the pack as the most expensive and most powerful.

AMD says that the Ryzen 3900X offers performance comparable to the Intel i9-9920X for roughly half the price.

With Intel revealing its 10th Generation processor, code-named Ice Lake, during Computex too, the fight for the CPU crown is only getting started.

The new AMD processors make use of the 7nm ‘Zen 2’ core architecture. This means AMD has a slight edge on Intel, which has only been able to scale down its manufacturing process to 10nm with its newest offering of CPUs. Having a smaller process means AMD can fit smaller components onto its chip and theoretically improve performance.

Running a demo of the Blender benchmark at AMD’s Computex 2019 keynote, the Ryzen 9 3900X claimed a 16% performance gain over its Intel rival. Running Cinebench R20 suggested Ryzen 3 CPUs can hold their own against hot heads like the Intel Core i7-9700K and Core i9-9900K as well.

The Intel CPU is also much hungrier, with a 165W TDP (thermal design point) meaning you’ll need a bigger cooler to service it. By contrast, the Ryzen 3 3900X has a lower TDP of 105W. 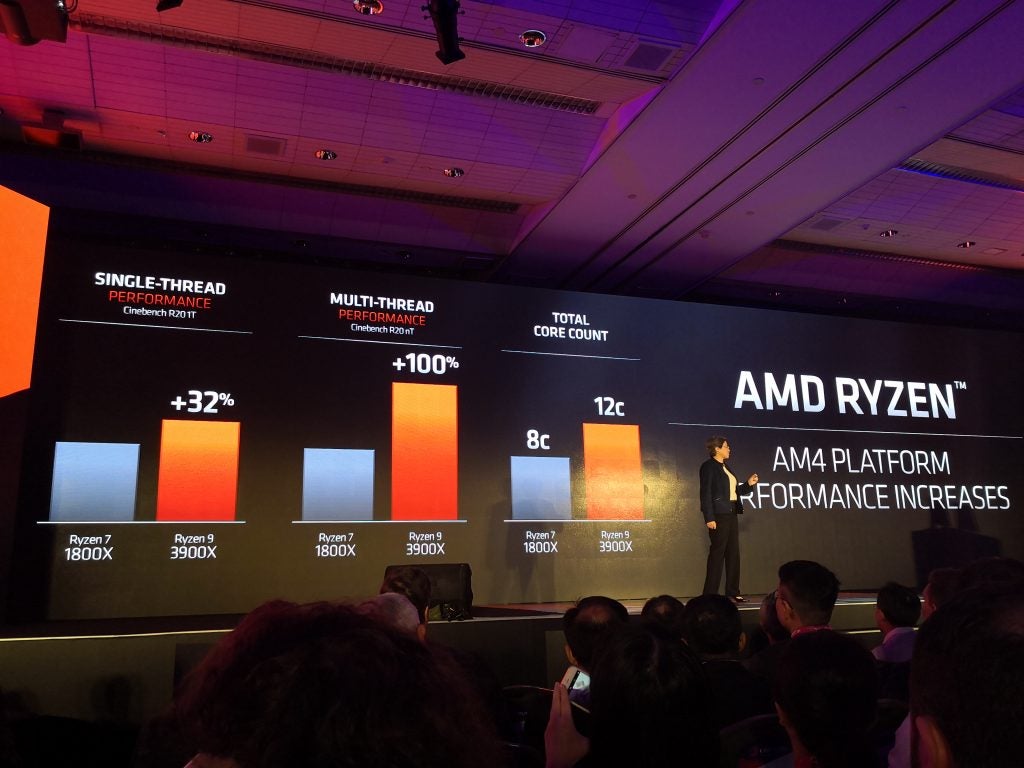 On top of that, the 3900X, along with all processors in the Ryzen 3rd Gen series, will support the newer PCIe 4.0 standard, which promises faster game loading times.

Based on the same AM4 socket, the 7nm Ryzen 3 CPUs are based on the Zen 2 architecture, which apparently has twice the cache size, double the floating point performance, and 15% more instructions per clock uplift compared with the original Zen core architecture of the original Ryzen CPUs.

With both the new Ryzen and Navi series, AMD may well have stolen a march on both of its key rivals here.

AMD Ryzen 3 Release Date – When can you buy a Ryzen 3 CPU?

The second-best AMD Ryzen 3 processor, the Ryzen 9 3900X, will retail for $499. That’s seemingly an incredible bargain when you consider Intel’s own recommend customer price for the i9-9920X is $1189-$1199. Those looking to build a gaming rig should think twice about sinking a stack of notes into a new Intel CPU and motherboard.

Here’s how the rest of the AMD family compares, as well as prices, in US dollars – note that UK prices have yet to be confirmed, we’ve just added conversions based on current exchange rates for your reference:

Are Ryzen 3 processors powering the PS5 and Xbox 2?

Yes, sort of. Both Sony and Microsoft’s upcoming consoles will feature AMD processors.

A custom processor based on the Zen 2 architecture AMD’s using for its Ryzen 3 series of CPUs will power Microsoft’s forthcoming Xbox 2 console – aka Project Scarlett.

Details of the custom chip were announced by Phil Spencer, executive vice-president of gaming at Microsoft, at the Xbox event at E3 2019.

“Together with our partners at AMD, we have co-engineered and custom designed a state-of-the-art processor for Project Scarlett,” said Spencer, before rolling a trailer which confirmed that the custom unit used the Zen 2 architecture and AMD Navi graphics technology.

While no details of the custom chip were announced – so we have no idea about the clock speeds, the number of cores and threads – we know that it’s based on AMD Zen 2 architecture, which follows a 7 nanometre (nm) manufacturing process.

Compared with the processor in the Xbox One X, another custom AMD job which featured a 16nm processor, the Xbox 2’s processor promises a huge leap forwards. In theory, because components are smaller, a greater number of transistors can be packed into the same physical space, allowing for greater performance. The Xbox One X features an eight-core 2.3GHz processor, so as well as a more transistor-dense processor, we would hope that the Xbox 2 CPU gets a boost here, too.

While Sony has yet to officially announce that the main processor of the PS5 uses AMD Zen 2 technology, it’s highly likely that it will.

Will you be buying yourself a Ryzen 3 processor come 7 July? Let us know @TrustedReviews on Twitter