With pricing starting at £329 for the Founders Edition model, it’s still well in mid-range GPU territory and over £100 more expensive than its predecessor, the GTX 1060, when it launched.

This has led many – including some in Trusted towers – to question why the new card costs so much. More so when you consider that only a couple of games take advantage of Turing’s unique ray tracing and DLSS technologies – and ray tracing won’t be exclusive to 20 Series cards forever.

Thankfully, the Nvidia RTX 2060 manages to silence these naysayers by easily matching the performance of equivalently priced cards, such as the now defunct GTX 1070. This, plus the future-proofing that Turing offers, makes the RTX 2060 a solid choice for 1080p gamers who can’t afford, or don’t need, the top specs offered by Nvidia’s more expensive 20-series cards. 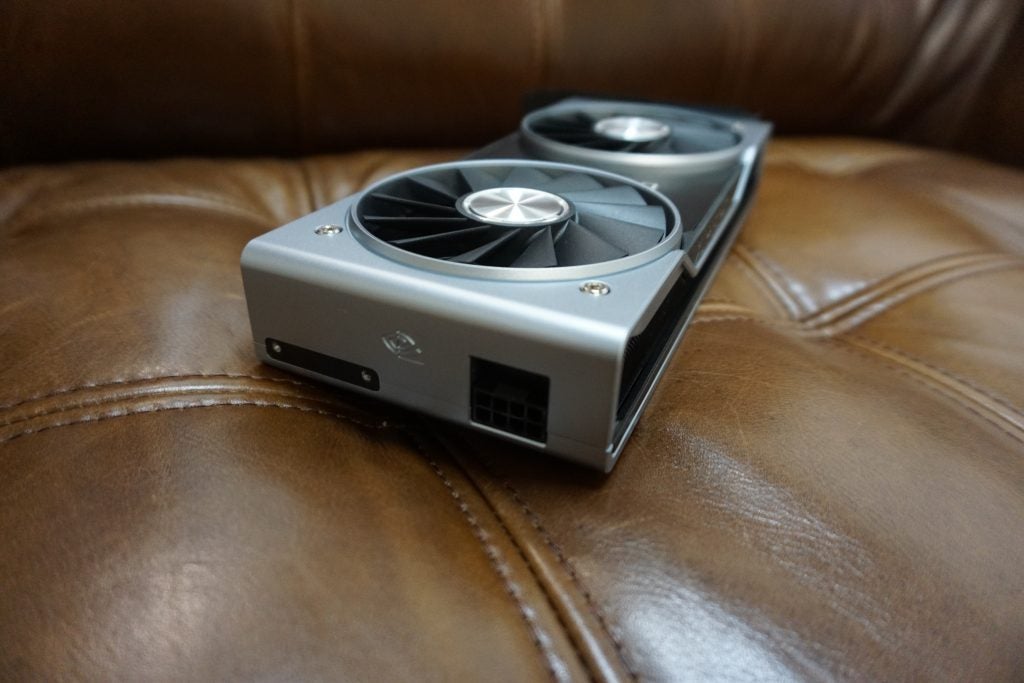 Given the difference in price, it’s no surprise the 2060 is a clear cut above the 6GB version of the 1060. But compare it to similarly priced cards, and the clear takeaway is that, like other RTX cards, the 2060 isn’t an incremental hardware upgrade in the same way that previous generation Pascal cards were.

In general, the Founders Edition 2060 is a slightly stripped-down 2070, being based on the same TU106 processor. The design features a single 8-pin power connector and dual fans. Around the back are two DisplayPorts, a USB-C and HDMI 2.0 input.

The specs further reflect this with it generally being a smidgen behind its more expensive sibling. The big sacrifices come not just from its reduced CUDA core count, memory setup and smaller number of Giga Rays.

The new GGDR6 standard is a step forward on paper, increasing performance while simultaneously reducing power consumption compared to the older GDDR5X standard seen in the 1060.

For non-techies, CUDA cores are the foot soldiers of a GPU, responsible for much of the computational heavy-lifting. Alongside the decreased amount of VRAM and lower memory bandwidth, gamers will see clear differences in FPS counts when gaming – even without ray tracing – compared to the 2070, 2080 and 2080 Ti.

But it stacks up surprisingly well compared to the soon to be discontinued, but equivalently priced GTX 1070, which used to be Trusted’s 1440p card of choice. This is impressive when you consider it also supports ray tracing and DLSS, two key technologies Nvidia is toting as the future of gaming. 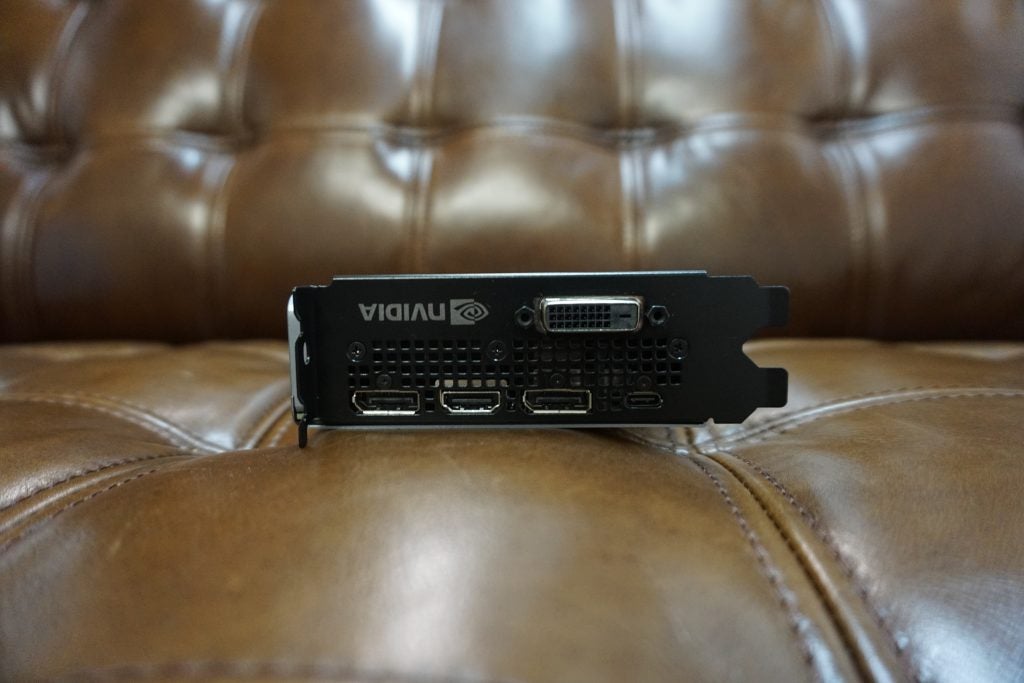 The Nvidia RTX 2060 features all the necessary ports

For those who missed it, ray tracing is a type of rendering technology designed to let systems produce more realistic lighting and shadows. The big selling point is that it lets games display reflections and light refraction and absorption more realistically.

DLSS (Deep Learning Super-Sampling) is an AI tech designed to reduce the stress placed on GPUs running demanding processes. It aims to let you play games at stonkingly high settings, with playable frame rates through a series of mysterious optimisations and up-scaling techniques that Nvidia is yet to explain – think of it as Turing’s magic trick.

Sadly, the only two games that currently showcase real-time ray tracing and DLSS right now is Battlefield V and Metro Exodus. Even with these constraints, the tech does offer a fair amount of future-proofing, especially when you consider how many big titles are set to support ray tracing and DLSS.

Coupled with Nvidia’s strong track record of getting companies to adopt its tech, I’m fairly happy listing the Turing features as a key selling point that differentiates the 2060 from similarly priced cards, and a factor most buyers should consider if they want a future proof setup.

Putting that aside for now, the Nvidia RTX 2060 is a pretty solid card when it comes to raw performance. Running the RTX 2060 through Trusted’s standard set of benchmarks, it easily tore through 1080p and 1440p gaming and matched, if not beat, the scores of its arch rivals. Scroll down to see its scores in each test.

Testing methodology
I benchmarked the RTX 2060 on our test rig, which has been designed to match the specifications of a standard gaming PC. It features the following components:

*Editor’s note: We haven’t included the AMD Vega cards, the RX590 and RX580, because we don’t have samples to hand. We’ll update this review when we get them back in.

Shadow of the Tomb Raider
Shadow of the Tomb Raider is a great representation of a modern triple-A game. It has a decent set of demanding graphical effect options and is compatible with DirectX 12. Its graphics benchmarks also task the GPU with a variety of complex particle and lighting effects, which makes it a great all-round gauge of how a new card will handle modern titles. Support for Turing’s ray tracing and DLSS are also set to be rolled out in the very near future. 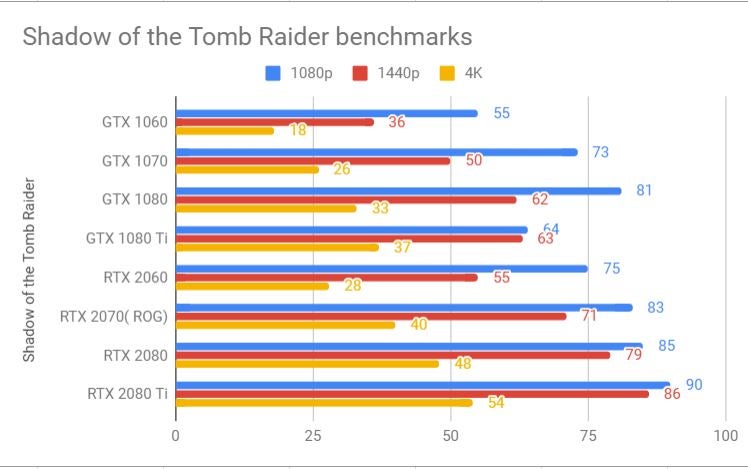 The 2060 performed admirably at 1080p and 1440p, offering GTX 1070-level frame rates with the games graphics set to Highest. You’ll have to lower the graphics settings if you want to play the game in 4K, however. The 1080p frames per second count also leaves me reasonably confident the 2060 will be able to run it with ray tracing when the update rolls out.

Ghost Recon: Wildlands
Despite being at the end of its life cycle, the Ghost Recon: Wildlands’ benchmark remains useful since it features large open environments with more objects to render than can easily be counted. This makes it a good metric for judging how the game will handle big open-world games. 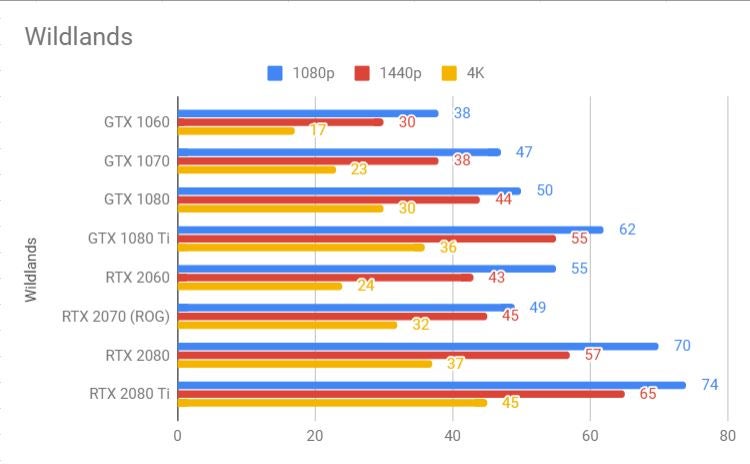 Here, too, the 2060 was a solid performer, once again matching the 1070. At 1080p, it came in just shy of the 60fps ideal. The 43fps 1440p frame rate is also more than playable. You can also easily boost performance by dropping the settings to Very High, rather than Ultra. This turns off the VRAM intensive Nvidia Turf setting. 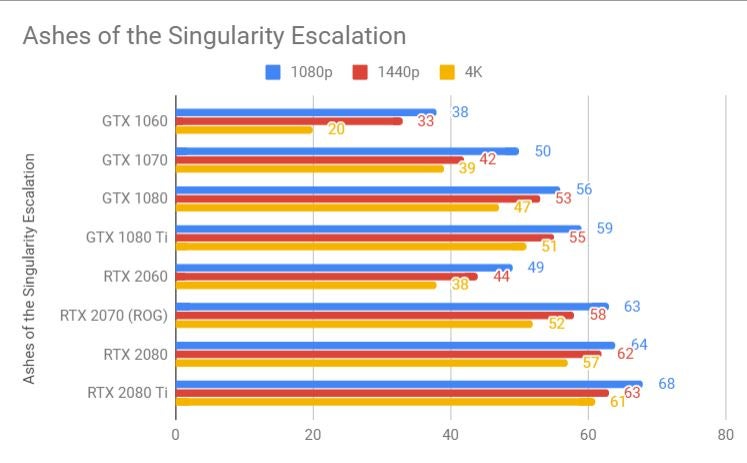 RTX 2060 Ashes of the Singularity benchmark

The benchmark told the same story as Wildlands and Tomb Raider, with the 2060 offering performance on a par with the 1070, making it a stable workhorse for 1080p and some 1440p gaming.

3DMark: Fire Strike Extreme
3DMark is a synthetic testing suite with a variety of different benchmarks designed to simulate various types of game. Fire Strike Extreme is one of the more demanding. It also acts as a good stress test to monitor the GPU’s power consumption and average temperature while gaming.

The GPU once again positioned itself next to the 2070 in terms of raw performance. What’s interesting is how much more efficient the 2060 is for cooling. The 2060’s cooling system is blissfully quiet and managed to run at a peak temperature of 66ºC during the stress test. Power consumption peak was a smidgen higher than the 1070’s, but not enough so to cause concern. 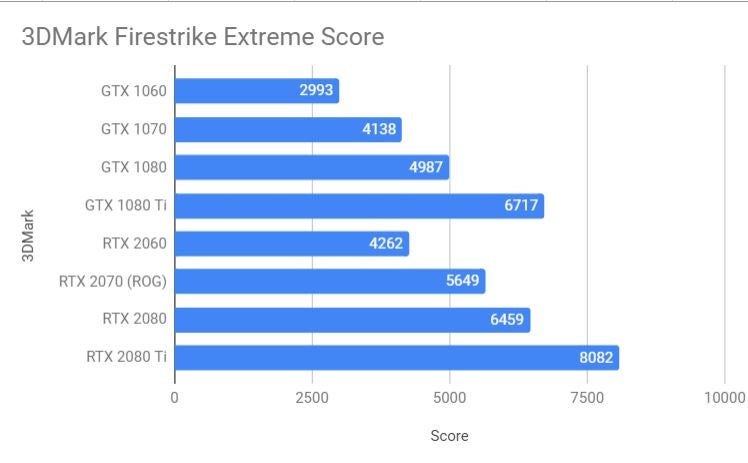 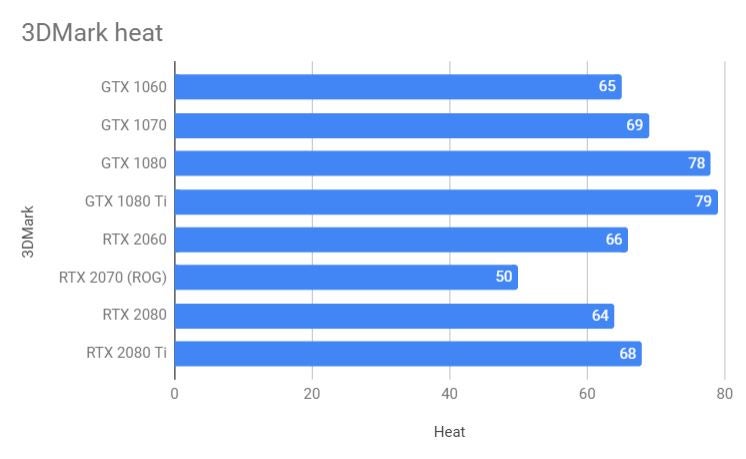 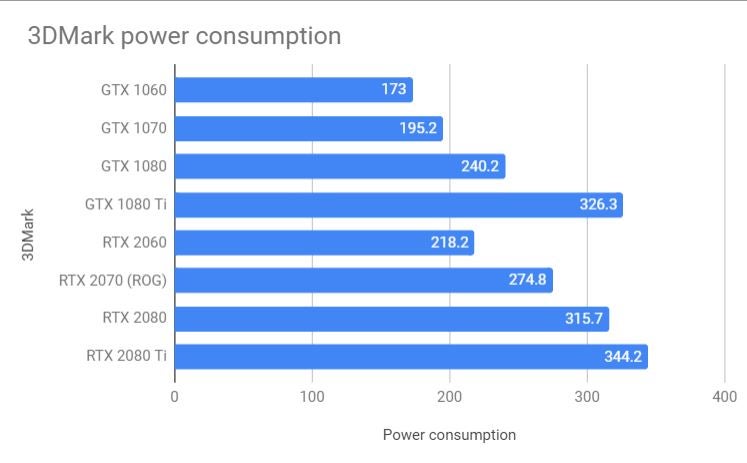 The one factor dividing opinion about Turing is if ray tracing and DLSS are enough to justify the card’s increased price.

On the one hand, I understand the naysayers’ argument that there’s a scarcity of games able to take advantage of the new tech. Ray tracing and DLSS is currently limited to Battlefield 5 and Metro Exodus.

But for me, given the sheer number and quality of studios already confirmed to be releasing compatible titles – or adding the functionality to existing ones – I can’t help but be optimistic, especially considering how well ray tracing performed in Battlefield 5 during my review.

The addition of ray tracing made a huge difference to Battlefield 5. The improved lighting, shadows and reflections gave the game new life and looked amazing. The only downside is that without DLSS, running it put a serious strain on the 2060.

You can see the impact on the GPU in its Ultra setting in the table below. 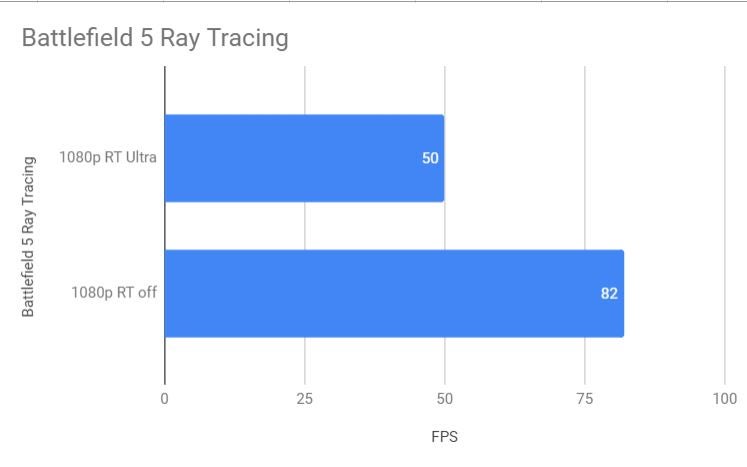 Being fair, dropping the ray tracing level to medium boosted the frame rate past 60fps, but it didn’t look anywhere near as good.

Hopefully, the addition of DLSS will help alleviate this problem now it has been enabled for Battlefield. We will be updating this review with our findings for DLSS shortly.

The GeForce RTX 2060 isn’t great for overclocking. During tests, the card became unstable the moment I tried to add any more than 150MHz. Going up to 200MHz was out of the question. This is a shame, since it means you’ll be unlikely to see huge clock speed improvements on third-party 2060 cards. 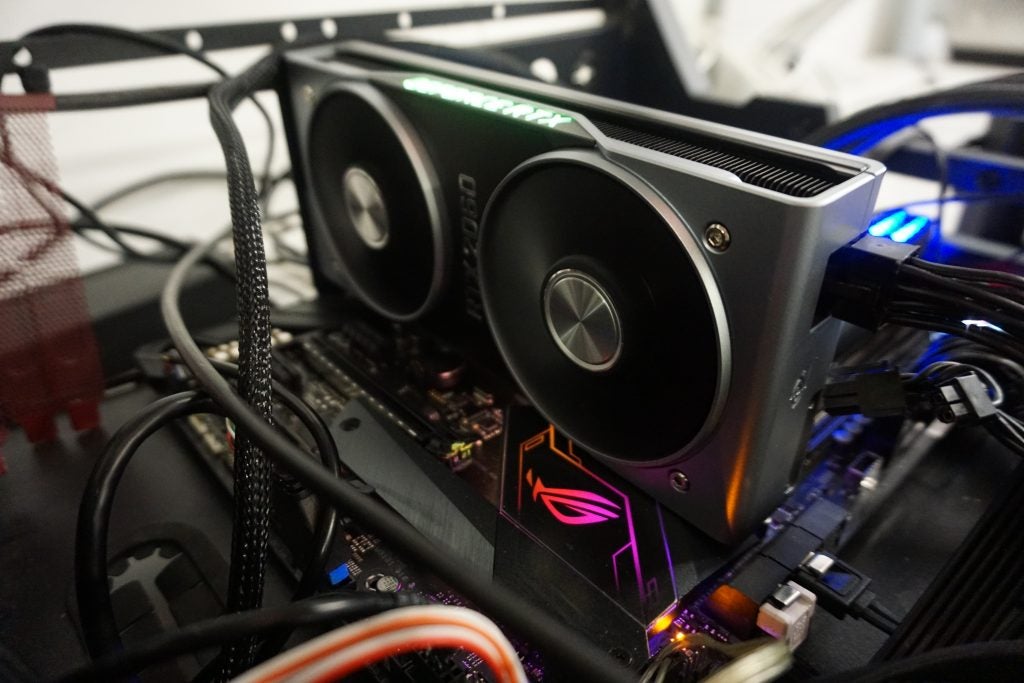 If you’re after a decent graphics card for 1080p gaming then the RTX 2060 is a great choice. The card offers equivalent performance to the now discontinued GTX 1070. It’s also the cheapest RTX card available.

This isn’t a big deal right now, given the lack of titles taking advantage of ray tracing and DLSS at the moment, but it gives the 2060 an element of future-proofing that’s missing with cheaper 10-series cards.

My only concern is quite how big a hit ray tracing has on Battlefield – the only title I could test it on at the time of review. If DLSS fixes the issue then this won’t be a problem.

The Nvidia RTX 2060 is a fantastic card for 1080p gaming, and the cheapest option available for people looking to take advantage of Nvidia’s new Turing tech.