The Dell XPS 13 2-in-1 is close to being the perfect convertible 2-in-1 laptop. It's got a premium design, flaunts Intel's new Ice Lake chip which is capable of casual gaming and has an absolutely gorgeous display. Dell's determination to convert to the new USB-C ports may frustrate those who don't want to use adaptors to hook up old peripherals and it's unfortunate how much the 4K panel saps the battery, but otherwise it's difficult to find much wrong with this superb portable.

The Dell XPS 13 2-in-1 is a new ultra-portable laptop, capable of being turned into a makeshift tablet. However, one of the most exciting elements of this convertible 13-inch laptop is the fact that it’s one of the very first devices to feature one of Intel’s new Ice Lake processors.

Intel’s 10th Generation Ice Lake chip brings a slew of exciting features to the XPS range. Firstly, its integrated graphics engine allows you to do media work and play low-demanding games without the need of a dedicated graphics processor – at least in theory. Battery life is also said to be improved when compared with the previous Whiskey Lake processors. The new Ice Lake chips boast support for the speedier and more reliable WiFi 6 standard too.

Factor in all the other traditionally excellent Dell XPS features, such as a gorgeous 4K display option, solid design and the industry-leading keyboard that’s an absolute joy to type on, and you’ve got one of the very best ultrabooks available.

Dell’s the best in the business for laptop design, and the Dell XPS 2-in-1 is a stunning example. The combination of the aluminium lid casing and glass-fibre palm rest is as classy as it gets for laptops, while also boasting a solid build that should withstand clumsy hands and chaotic backpack journeys.

Despite being so hardy, the Dell XPS 2-in-1 is still a lightweight system, and at only 1.33kg is easily forgettable when stowed in your bag. Dell claims this is the smallest ever 13-inch laptop, with dimensions measuring in at 7.8mm tall (when closed), 302mm wide and x 199mm deep. This really is a dinky machine, making it all the more impressive considering the components packed inside.

The InfinityEdge display returns too, with an 80.7% screen-to-body ratio. By almost eradicating the bezel, the overall design looks more modern and trendy, while the display seems more prominent too. 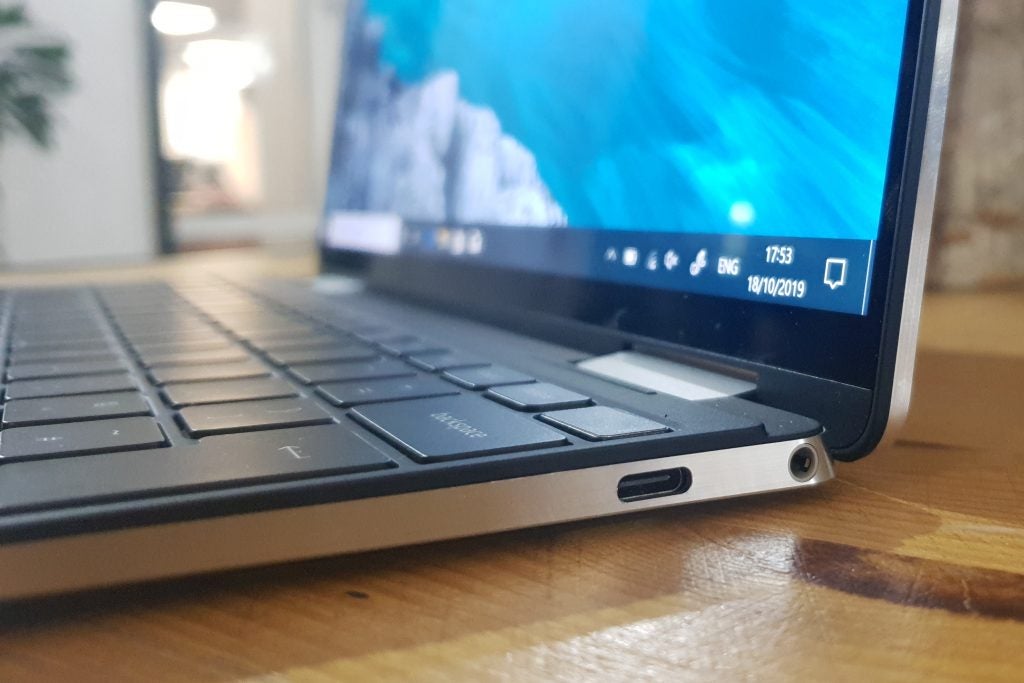 This XPS is also one of the best 2-in-1 laptops for tablet use. It’s so little and lightweight that it’s comfortable to use as a tablet for extended periods of time. As with the majority of 2-in-1 laptops though, it still has a number of limitations: the lid doesn’t lie completely flat against the chassis and the keyboard faces out on the rear where your fingers rest. And while Windows tablet mode is fine, it’s not as intuitive as iOS or Android.

There’s a trio of colour options to choose from for the XPS 13 2-in-1: Frost, Rose Gold and Platinum. These may just be fancy labels for white, pink and silver, and don’t exactly break the mould for laptop design, but I still appreciate the variety with all three options looking sublime.

It’s also worth mentioning Dell’s eco credentials, with 25% of the XPS packaging made up of ocean plastics and the remaining 75% made from other recycled plastics. The actual laptop is eco-friendly too, with 90% of the components able to be recycled or reused. 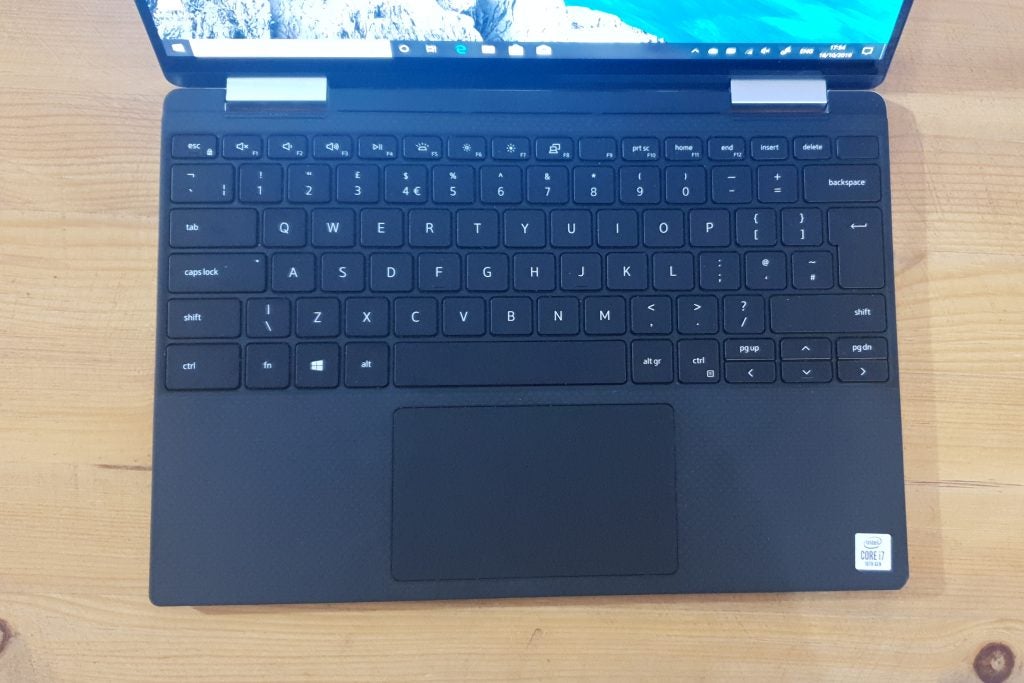 The only criticism I can throw at the XPS 13 2-in-1 in terms of design is the stingy offering of ports, with just two Thunderbolt 3 (with power delivery and DisplayPort support), one USB-C, microSD card reader and headphone jack sockets found on the sides.

This means there are no traditional USB-A ports on the device, which could be a problem if you have a lot of peripheral devices using that connection. Dell does include a USB-C to USB-A adapter in the box though, and we can see why the manufacturer’s keen to move to more modern and efficient data transfer methods, but it has to be said other companies are offering a more gradual and consumer-friendly move over to the next-gen ports.

Despite being a small 13-inch laptop, the Dell XPS 13 2-in-1 still has a full-size keyboard, featuring fat, chunky keys with 1.3mm travel. There’s a satisfying click to each key press, offering enough feedback so you know for sure that each input has been registered.

There’s no MagLev key switches with magnetic mechanisms here though, which was present with the Dell XPS 15 2-in-1. I’m not sure whether Dell has ditched this feature following customer feedback, for cost-cutting reasons or some sort of design issue, but I’m personally a little disappointed that it’s missing here. 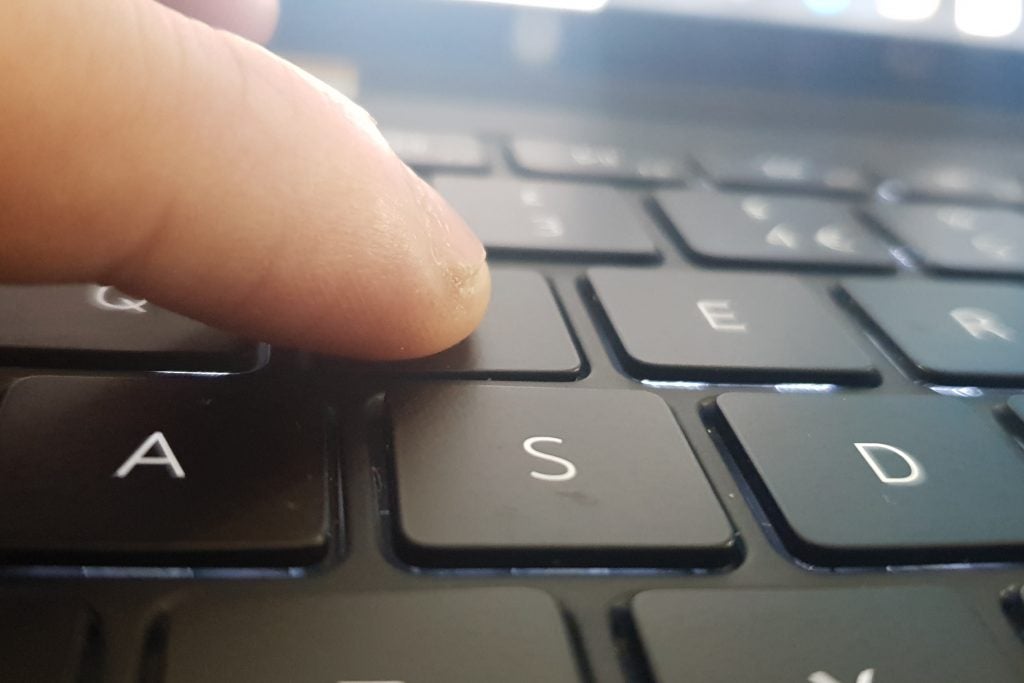 You do still get a backlight under the keys. This is extremely subtle and only really noticeable when typing away in the dark, but it still contributes to the premium design.

The glass trackpad is another excellent feature with precise tracking while being pleasantly smooth to the touch. It’s also pretty large for a 13-inch laptop, which may sound like a small positive, but is highly beneficial for the overall experience.

Display – One of the best laptop touchscreens

The Dell XPS 13 2-in-1 has two resolution options: Full HD and 4K. The review unit in my possession is the latter, boasting 3840 x 2160 pixels. Despite the small 13.3-inch screen size, the improvement in picture quality is still immediately noticeable compared to Full HD.

You of course have to pay a little extra for that 4K resolution, with the cheapest model sporting the Ultra HD panel coming in at £1549 – the base-model FHD option is significantly cheaper at £999.

Is 4K worth the money on the Dell XPS 13 2-in-1? I’m unconvinced. 4K gaming is absolutely out of the question due to the laptop’s lack of GPU firepower, so you’re basically restricted to 4K video streaming on Netflix and the like. And while the Dell XPS 13 2-in-1 does have a lovely screen, you’re much better seeing your 4K content up on a massive OLED TV instead.

A display isn’t just about pixel count though. Its sRGB colour gamut coverage is important for colour accuracy, and the XPS boasts a 99% sRGB score which is incredible for a portable. This gives the XPS a vibrant and punchy picture, which is a high enough standard for digital artists.

While the XPS 13 2-in-1 isn’t really powerful enough for professional photographers and videographers to consider, the screen is still brilliant for its pro-grade colour accuracy when displaying photo-realistic images, scoring a 76% Adobe RGB coverage and 82% DCI P3 coverage.

The Dell XPS 13 2-in-1 also has one of the brightest laptop displays on the market at 503 nits – well above the 300 nit average. This results in an excellent 1487:1 contrast ratio.

The white visual temperature is also near-on perfect at 6625K, a whisker away from the 6500K ideal figure which ensures the display’s white light is as close to resembling natural daylight as possible. Deviate from this figure too much, and unnatural blue or red light begins to creep into the picture – something which isn’t an issue here.

Overall then, the Dell XPS 13 2-in-1 has a gorgeous display. If you’re happy with compact 13.3-inch screen size, then I really can’t find a flaw here, whether you’re opting for a Full HD or 4K resolution.

The Dell XPS 13 2-in-1 is the very first laptop we’ve tested to feature an Ice Lake processor. Despite being a 10th Generation Intel Core chip, I wasn’t expecting this portable to boast industry-high performance speeds, since Ice Lake is optimised for battery longevity and integrated graphics rather than the blistering speeds Comet Lake CPUs specialise in.

That showed in our Geekbench 5 benchmark tests, as despite my review model possessing the best available processor configuration (the Intel Core i7-1065G7), the Dell XPS 13 2-in-1 still lagged behind the performance of older portables with an 8th or 9th Generation processor, including Dell’s own XPS 15 2-in-1.

That’s an unfair comparison though, with the Dell XPS 13 2-in-1 far smaller than the company’s other convertible laptop. A better comparison would be to pitt against the LG 14 2-in-1, and the XPS 13 2-in-1 faired far better here, seeing superior scores for both PCMark 10 and Geekbench 5.

But let’s not get too bogged down by numbers on a spreadsheet. In terms of actual real-time performance, the Dell XPS 13 2-in-1 felt supremely speedy, coasting through basic tasks such as handling multiple web browser tabs, processing word documents and streaming video content. I used various apps while using the machine, including Spotify and the messenger app Slack. Neither application slowed or crashed during my time with the portable.

One of the key new features of Ice Lake is the Intel Iris Plus integrated graphics that, in theory, allows you to play video games and edit video content without the need of a dedicated graphics card. In reality, it’s not so straightforward.

Firstly, it’s worth noting that despite having one of the best integrated graphics engines available, the Dell XPS 13 2-in-1 is certainly no gaming laptop replacement. Modern AAA titles wouldn’t run at all, so you can forget about playing the likes of Borderlands 3 and Ghost Recon Breakpoint.

Meanwhile, low-demanding video games (including battle-royales and titles released a number of years ago) could run in Full HD on the Dell XPS 13 2-in-1, but usually at a low frame rate. For the best experience I had to lower the graphics settings for most games, and even then I rarely saw figures exceed 30fps. 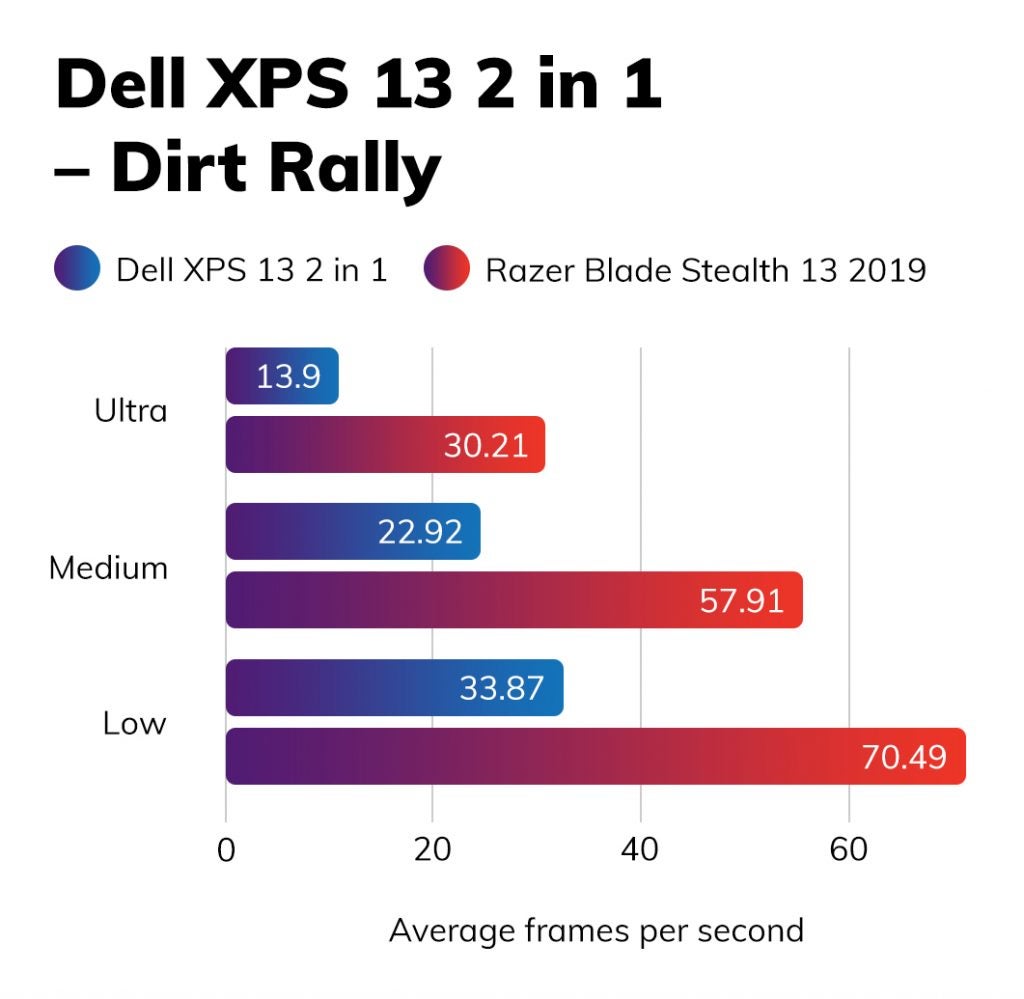 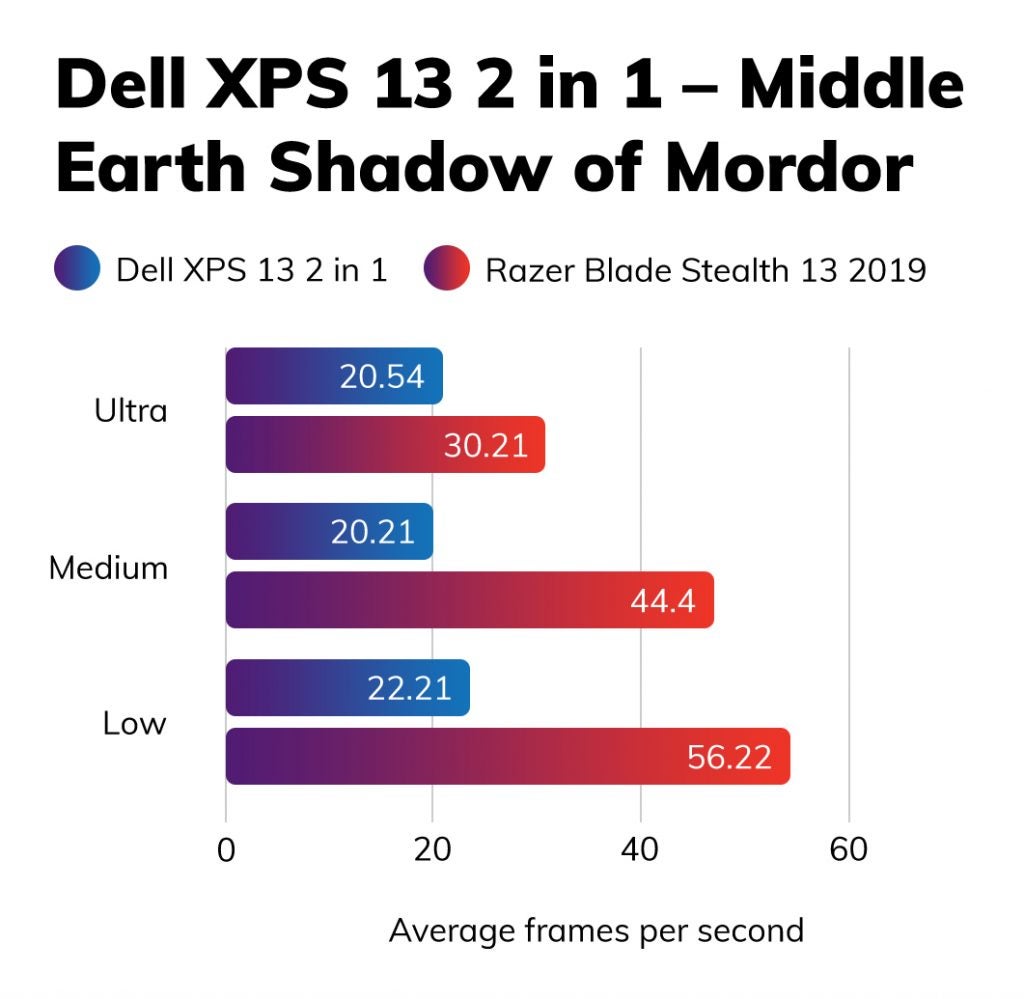 For casual gamers who just want to sneak in some Fortnite or Apex Legends game time on their lunch break, this performance is decent enough. For competitive players though, the Dell XPS 13 2-in-1 simply isn’t powerful enough. I saw an average frame rate of 15fps when playing Apex with “Insane” graphics, with that result climbing up to 20fps when lowering the graphics settings to “Medium”.

Intel suggested its Ice Lake processor will be competing with entry-level mobile GPUs, but our benchmark results show it’s not quite up to the standard of the likes of the Nvidia MX150 dedicated graphics card, which features in the Razer Blade Stealth 13 2019. If you’re looking for an ultra-portable laptop primarily to play video games, the Stealth 13 is still the best-in-class option, but it’s still remarkable to see the Dell XPS 13 2-in-1 widening its capabilities as an all-rounder laptop.

Battery – Below average stamina for a convertible

Dell claims this specific model of the Dell XPS 13 2-in-1 has a battery life up to 9 hours and 54 minutes. We fell short of that figure when setting battery benchmark software PowerMark to simulate web browsing and video streaming until the battery drained, seeing a figure of 7 hours and 7 minutes.

This is an okay battery result, although quite a way off the likes of the LG Gram 2-in-1’s stamina of 12 hours. It should still serve you for the majority of the day though, only just falling short of typical office hours. 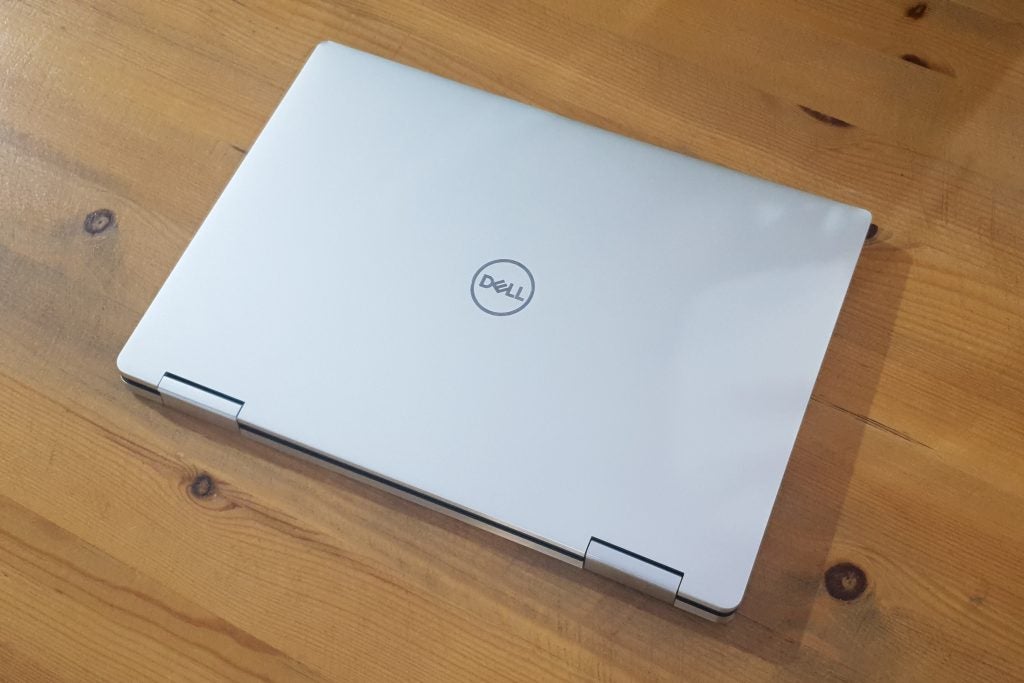 Opt for the Full HD version of this laptop configuration though, and Dell claims the battery life will jump up to 16 hours and 58 minutes. Even if the battery life turns out to be two hours shorter than this figure in reality, it would still be an excellent result. I’d personally gladly swap the 4K display for improved battery, but that’s a matter of preference.