What is the Sony Xperia XZ Premium?

Update: Android 8.0 Oreo is now rolling out to Sony’s 4K phone. Along with the usual Android Oreo features, you will now benefit from the face-scanning app introduced with the Xperia XZ1.

This is Sony’s headline phone for 2017 and, as you’d expect,  it comes with all the top specifications. Like Sony’s previous flagship, the Z5 Premium, there’s a 5.5-inch screen with 4K resolution and HDR (with a caveat, mind), and a Snapdragon 835 processor that can give rival handsets such as the Samsung Galaxy S8, HTC U11 and LG G6 a run for their money.

But where Sony really wants to stand out is with its camera. The headline feature is its 960fps slow-motion capabilities for dramatic videos. This by far eclipses the slow-motion available on other handsets, which typically tops out at 240fps. Unfortunately, this alone isn’t enough to make the Xperia XZ Premium stand out in a competitive crowd.

First to that caveat I’ve just mentioned. While the screen is technically a 3840 x 2160 resolution panel, the vast majority of the time you’ll be looking at an upscaled 1080p version of the Android operating system.

Support for 4K resolution alongside HDR (10-bit, to boot) is also meant to be available through Amazon Prime Video, but during testing I wasn’t served any suitable content. This was even after getting my hopes up when a notification popped up saying 4K HDR content was available and directing me through how to install the Amazon Prime Video app, which in itself is still a slightly involved process. 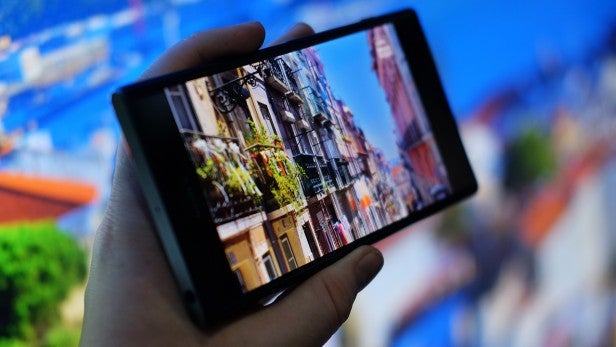 But even though the Prime Video app had a section dedicated to content in 4K and HDR, I could never get it to stream in anything but1080p and standard dynamic range. Trying to download the content for offline viewing wouldn’t let me save in 4K/HDR, even though the on-screen prompt offered me the choice of ‘Best’ quality where 1 hour of content would rack up more than 6GB of storage. Even when selecting this, content would still download at 1080p and actually only require a fraction over 1GB of storage space.

Diving into the settings menu and opting for ‘Best’ quality downloads without a prompt still didn’t force 4K downloads. Needless to say, it’s still not quite ready. Still, the almost ridiculous 807ppi pixel density of the screen made light work of showing off my own 4K, non-HDR content shot on a GoPro Hero 5 Black.

Wistfully watching back old holiday videos, the colours popped from the IPS Triluminos 5.5-inch display and videos looked sharp. As a phone that supports the HDR standard this means a high top-level brightness, which, even when not displaying HDR content, is still useful for visibility on a bright day outdoors.

Since Sony hasn’t departed from a more conventional 16:9 aspect ratio, the Xperia XZ Premium’s display doesn’t need to use black bars to display apps and videos properly, which is the case on the LG G6 and Samsung Galaxy S8.

While other manufacturers have long moved on to curved edges and rounded corners, Sony has stuck with the same industrial design for its Xperia phones. Put this phone next to the Samsung Galaxy S8, LG G6 or newly revealed HTC U11, and it feels like a relic.

The thick bezels – top and bottom – look dated now, especially next to the bezel-less Galaxy S8, and leave the Xperia XZ Premium feeling just plain boring. You’d be forgiven for not even realising that this is Sony’s latest flagship.

There’s a choice of Deepsea Black, which is the model I was sent in for review, and Luminous Chrome, which is super-shiny and reflective. 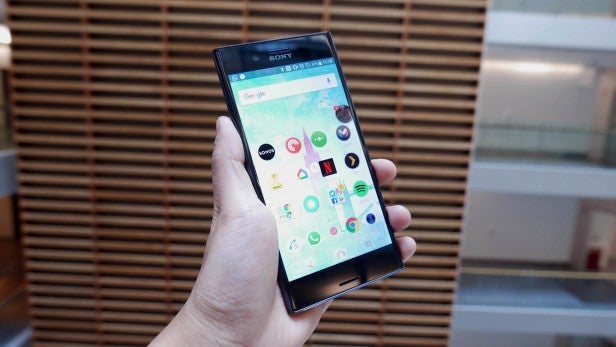 The Sony Xperia XZ Premium is probably one of the most uncomfortable phones I’ve held in some time, exacerbated by its large physical size. Attempt to use it one-handed, and you’ll find the corners dig into your palm awkwardly; the top of the screen will be unreachable for anyone without the largest of hands. Every time I reach into my pocket to grab the phone, my hand is met by a sharp corner.

Following a few weeks of use, I’ve come to realise that the actual construction of the phone leaves a lot to be desired.

Suitably premium materials have been used here, such as glass on the front and back, with Gorilla Glass 5 adding some robustness to the screen. However, under close inspection I can see lots of micro-scratches on the front and plenty more on the rear. 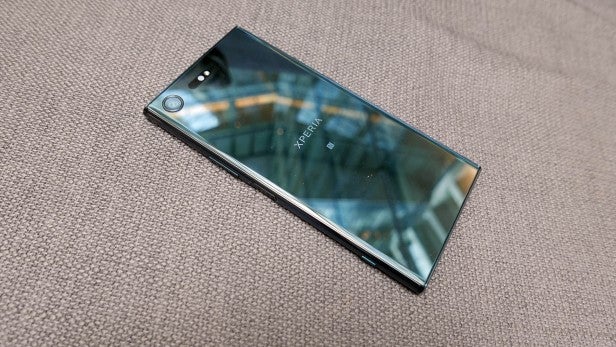 The glass rear is incredibly slippery. I’ve lost count of the times the phone has gradually slid off what I assumed was a horizontal surface. Even the slightest angle will cause the phone to slide.

My desk at home is one of those space-saving flip-up desks, which I assume isn’t perfectly level when flipped down; the phone has fallen off it countless times. I haven’t encountered such issues with any other handset I’ve used.

Train tray tables have also posed a problem; the phone even fell off the top of a cup on which I’d casually decided to rest it without any thought.

The Xperia XZ premium is also an extreme fingerprint magnet, looking smudged and greasy practically all the time – unless you obsessively wipe it down. 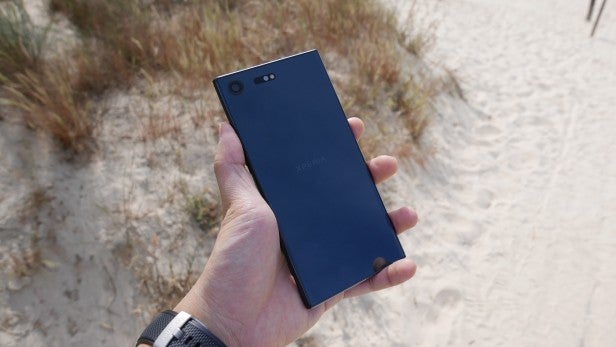 The edge of the phone is plastic, which is a sensible move in terms of rigidity, but it feels cheap. You’ll find a volume rocker along the right-hand side along with a recessed power button that houses a discreet fingerprint scanner in the style of Sony’s previous flagship phones.

It was generally quick to respond, although not quite as snappy as the fastest standard front or rear fingerprint scanners, perhaps due to having a much smaller surface area on which to take a reading. There isn’t much in it, though, and I didn’t experience any problems unlocking the phone – plus it does make for a more elegant approach.

If you like viewing at-a-glance information from your lockscreen, you might have to get used to pressing the volume button to wake the screen because pressing the power button with a registered finger will just unlock the phone, bypassing the lockscreen altogether. 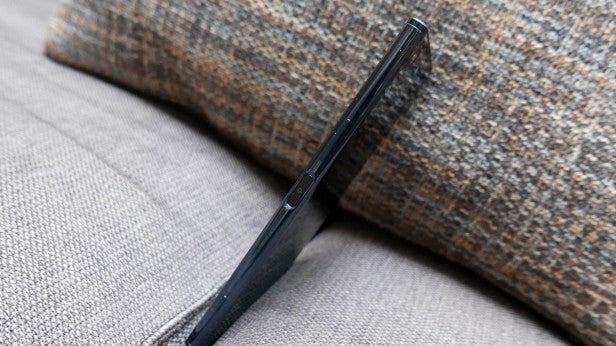 Look to the bottom of the phone and you’ll find a USB-C port for charging with a 3.5mm jack on the top. There are two schools of thought here, and I’m of those who believe a headphone jack is better placed on the bottom of a handset, but at least wired headphones are an option here without an adapter.

The Xperia XZ Premium is at least IP68 rated, meaning it can withstand being submerged in water to depths of 1.5m for 30 minutes, which is always a welcome and useful feature.