HTC U11 long-term review: HTC’s best in a long time

When the HTC U11 first came out, I thought it was a great phone that not many people would buy.

The U11 has a top-notch camera, super-fast Snapdragon 835 CPU and wonderfully sharp quad-HD screen. But its slightly atypical shiny design, lack of a headphone jack and wealth of superfluous features left me concerned there wasn’t enough to entice buyers away from the stellar Galaxy S8, or cheaper OnePlus 5.

Related: When will my phone get Android Oreo?

After three months with the phone, though, I can’t help but hope I was wrong. With long-term use the U11 has proven itself to be one of the best handsets I’ve tested this year, and has had a number of welcome upgrades that will delight tech fans.

At a basic level this is because the phone’s continued to get all the basics right. Unlike the Huawei P10 I was previously using, the U11’s battery hasn’t deteriorated at all and still offers me the same day and a half of regular use that it did straight out of the box. Performance is also as nippy as ever – a fact likely aided by the U11’s lack of bloatware.

The U11’s software has actually improved since launch thanks to the addition of Amazon Alexa support. I’m not convinced Alexa is any smarter than Android’s built-in Google Assistant, but the addition is a welcome one that made it easy for me to shop on Amazon without having to launch the app and manually search for items.

The feature also showcases one of the U11’s best, but most overlooked, selling points: its microphones. The U11 has some of the best mics I’ve used on a phone, and they mean that Alexa is worryingly good at picking up voice commands – a fact showcased when I nearly made an accidental and costly Nvidia GeForce GTX 1080 Ti purchase when I inadvertently answered “yes” to a visiting friend’s question while running a price check with Alexa.

Alexa also made me finally properly take advantage of the U11’s previously bizarre “Edge Sense” squeeze controls. I currently have the phone set so a short squeeze will launch Alexa while a long one will kickstart Google Assistant.

That’s not to say everything has been kittens and rainbows during my time with the U11. The lack of a headphone jack is still an annoyance that’s kept me from using my favoured Fender FXA2 wired headphones, as the bundled USB-C adapter is insanely flimsy and easy to break. I’m already on adapter number three after the connecter bent in my pocket on the walk to work.

The adapter is also fairly finicky to replace, as the U11 only accepts the official one being sold on HTC’s online store. Be warned, close to all of the third-party USB-C adapters on Amazon will not work with the U11.

Still, this is a small annoyance considering the HTC U11’s other perks, and one that can easily be avoided with the use of wireless headphones (if you can put up with the audio quality downgrade that is). The other option is to use a proper USB headphone amp but that’s an expensive option that’s only worthwhile if you’ve spent a decent amount on your cans.

The U11 is HTC’s answer to Samsung’s seemingly unconquerable Galaxy S8, which is TrustedReviews’ current smartphone of choice. In its bid to outdo the Galaxy, HTC has loaded the U11 with an arsenal of interesting features.

Highlights include Amazon Alexa support, Hi-Res Audio capabilities and a slightly bizarre set of “Edge Sense” squeeze controls – yes, you read that right. These, plus a wealth of cutting-edge components, make the phone a great choice for any smartphone buyer willing to put up with its atypical, super-shiny looks.

The U11 follows the same ‘Liquid Surface’ design as HTC’s previous U Play and U Ultra handsets. This replaces the unibody metal design for which HTC was previously known with a new combination of metal and glass.

Personally, I wish that HTC had stuck with metal, but from a distance I’ll concede that the design looks great. This is largely because HTC has managed to pull a canny trick, where the colour of the glass changes depending on teh angle from which you view it. For example, the silver version I tested switches between hues of silver and blue, while the black takes on a greenish tint at certain angles.

However, upon closer inspection of the device you’ll realise there are a few problems with the U11’s design. Unlike the Galaxy S8, which also features a mixed-material casing, the glass on the U11’s back is bolted onto – rather than housed within – the metal frame. This small difference makes the phone feel far more chunky, measuring in at  7.9mm thick – and, in my mind, slightly less luxurious.

This feeling isn’t helped by the fact that the back is an outright fingerprint magnet. Within 10 seconds of it leaving the box, the rear was a criss-cross of marks and smudges. 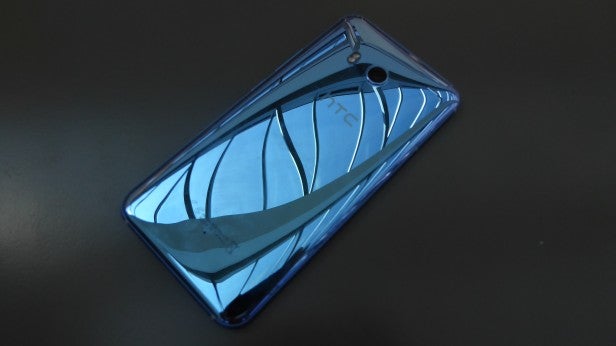 The only other slight quibble I have with the design is that, by today’s standards, the bezel is fairly chunky. A few years ago this may have been fine, but in comparison to other 2017 flagships – such as the Galaxy S8 and LG G6 – the giant black edge around the U11’s screen looks a little retro, and not in a good way.

Like past U-series phones, the U11 doesn’t have a headphone jack. I understand the argument that USB-C is the future, and HTC has managed to curtail the issues associated with not having a 3.5mm jack socket by including an adapter and a surprisingly good pair of in-ear USB-C “USonic” headphones. Nevertheless, the socket’s absence is still an annoyance.

Over the two weeks I’ve been using this phone, I’ve repeatedly been forced to forego the listening pleasure of my Sennheiser Momentum 2.0 and use the USonic – or my wireless Jaybird Freedom gym headphones – on my commute because I’ve forgotten to pack the adapter. Case in point: there isn’t a photo of the adapter in this review because I can’t for the life of me remember where I put it. 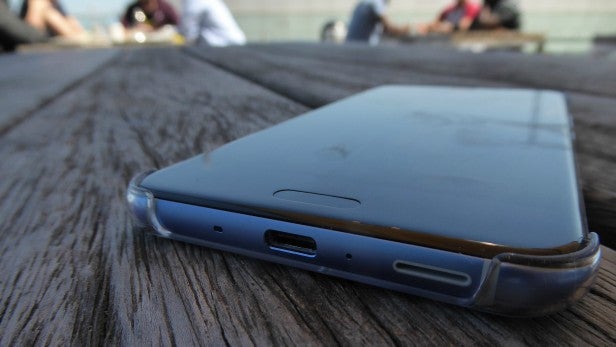 Outside of this, however, the design ticks most of the right boxes. The fingerprint scanner sits in the U11’s front home button and, while not quite as nippy as the Huawei P10 or P10 Plus’, it’s been consistently reliable when unlocking the phone.

The appearance of a microSD card slot is also welcome, although I can’t see anyone but power users needing it since the U11 already features either 64GB (tested) or 128GB of internal storage.

The fact that the U11 has been designed to meet IP67 certification standards will be a boon for accident-prone users, and means the phone will be able to survive accidental submersions in liquid at depths of 1m and below for 30 minutes.

Outside of its slightly chunky bezel, the U11’s screen is top-notch. The 5.5-inch panel’s quad-HD (2560 x 1440 pixels) resolution ensures text and icons are uniformly sharp; you’ll struggle to spot any individual pixels.

The Super LCD 5 panel also offers decent colour temperature, with none of the RGB spectrum looking too cool or too warm – although they don’t look quite as vibrant as competing phones with AMOLED panels. 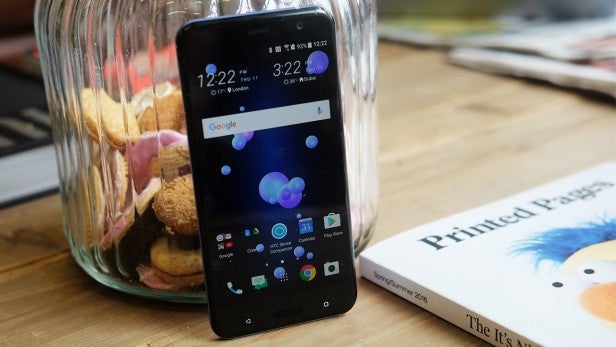 I didn’t notice any serious backlight bleed on the U11 during my first week of use, either. My only slight issue is that the maximum brightness isn’t quite as high as that of the Galaxy S8. This isn’t a huge disaster, as 99% of the time you won’t want the display maxed out. It only becomes an annoyance when using the U11 outdoors in direct sunlight, or very bright indoor areas, where the screen can become fairly reflective. Being fair to HTC, though, this is an issue I experience with the majority of phones I review.